On Sunday, following the historic nationwide Women’s March that brought over 3 million people across the country into the streets, a campaign was circulating online that encouraged participants to text a five-digit number to be counted as having participated.

Text COUNT ME to 89800 if you participated in the Women's March in any location today to be counted! #WomensMarch #WomensMarchOnWashington pic.twitter.com/C7IfvTmaan

The tweets surrounding the text campaign went viral, but many began to speculate over its origins as the effort wasn’t listed anywhere on the official Women’s March website. Late Sunday afternoon, national organizers of the march tweeted that they’d “seen some third party accounts collecting information for a headcount. The Women’s March is not behind these efforts.” That tweet has since been deleted. 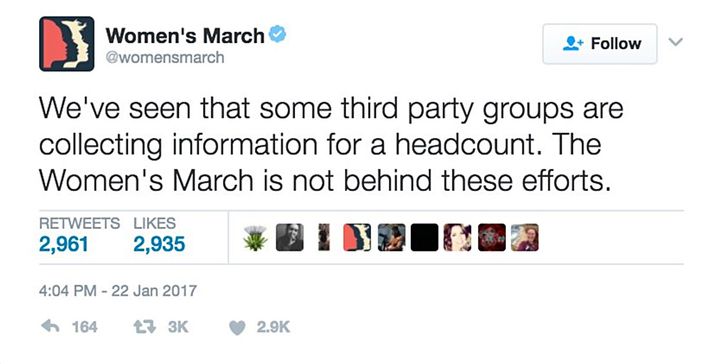 Attention - #countme or #countmein campaign is NOT affiliated with womens march, but an independent identity. pic.twitter.com/CHFiy4XBmb

Twitter was abuzz on Sunday night with the speculation that the 89800 number was a spam account from a marketing firm trying to collect data on the marchers. The Google form that gets sent back after texting 89800 says that the count was being “conducted by ItsTimeNetwork.org.” Martha McKenna, a consultant at It’s Time Network, told the Cut over the phone that the organization is a “research organization and network that pulls together women’s organizations in advancing policy to support gender equity.”

McKenna also offered this statement on yesterday’s debacle to clarify the nonprofit’s involvement with the Women’s March:

“It’s Time Network had been actively participating with the march organizers and had conference calls with them back in January. All of this was coordinated. But I feel like what happened in the mix of this—there were lots of organizers, big organizations, lots happening—the information got to some people, but not other people. In a march this big with so many moving parts, the Count Me In effort either fell through the cracks or didn’t get communicated. It was all done with the very best of intentions to support the march.”

After yesterday’s confusion, McKenna said she did not know if the Women’s March organizers would be using the data collected. She said only a head count and phone number would be given to the organizers, if they chose to use it.

A spokesperson from the national organizers of the Women’s March confirmed to us via email that more details are forthcoming on whether the data collected from It’s Time Network’s campaign will be used:

“We are beyond pleased to have the support of the millions of participants who joined in the Woman’s March in DC and across the globe. We are continuing to analyze the data that was received during the march day. As we proceed with this movement, we will provide additional details on how the data will be used, with the goal of keeping participants informed, connected and activated. This is just the beginning. “

We will continue to update this post as more information comes in.

See All
costumes Yesterday at 6:22 p.m.
The Most Important Costumes in Halston Are the Black Turtlenecks They were the designer’s signature look.
the object of our affection Yesterday at 5:05 p.m.
Let Me Dress Like a Teen, Please A very short personal essay about Lacoste’s new collection.
why is your skin so good Yesterday at 4:03 p.m.
How This Fashion Designer Gets His Skin So Good Joseph Altuzarra developed his skin-care routine during quarantine.
power Yesterday at 3:38 p.m.
‘I Was His Property’: Marilyn Manson’s Former Assistant Sues Ashley Walters says she was sexually assaulted, harassed, and psychologically abused by the singer in a new lawsuit.
burn baby burn Yesterday at 3:02 p.m.
The Vagina Candle Continues to Sow Discord Another customer is claiming that Gwyneth Paltrow’s novelty candle exploded in his home.
celebrity Yesterday at 1:42 p.m.
All the Assault Allegations Against T.I. and Tiny The rapper and his wife are under investigation by the LAPD regarding multiple allegations of sexual assault and drugging.
appreciation Yesterday at 1:03 p.m.
Jean Smart Is Hitting Her Stride Playing a Joan Rivers–esque comic in Hacks, the 69-year-old actress is doing some of the best work of her career.
butt out Yesterday at 12:25 p.m.
Emma Watson Is Not Engaged, Okay?! “If I have news — I promise I’ll share it with you.”
ask a boss Yesterday at 12:00 p.m.
‘Is It My Fault My Co-worker Was a Nightmare?’ That she’s gone on to have a successful career doesn’t indicate you were the problem.
surprise Yesterday at 10:31 a.m.
Congrats to New Mom Naomi Campbell! She announced the arrival of a “beautiful little blessing” in an Instagram post.
celebrity Yesterday at 10:20 a.m.
Infamous Short-Shorts Wearer Speaks Out Actor Milo Ventimiglia has addressed his viral short shorts, which he claims are actually “normal length.”
woody allen Yesterday at 9:58 a.m.
Drew Barrymore Discusses Being ‘Gaslit’ About Woody Allen With Dylan Farrow The daytime host reflected on her appearance in Allen’s 1996 film Everyone Says I Love You during their interview.
spicy! Yesterday at 8:21 a.m.
Oooh, Flamin’ Hot Cheetos Drama Frito-Lay says an upcoming biopic directed by Eva Longoria is based on “urban legend.”
oh? May 17, 2021
Lori Loughlin Would Like a Little Vacation, Please She and Mossimo Giannulli are asking a judge’s permission for a five-day trip to Mexico.
power May 17, 2021
Best-Selling Philip Roth Biographer Accused of Sexual Assault A new publisher has purchased the rights to Blake Bailey’s book despite allegations of rape against the author.
congrats! May 17, 2021
Ariana Grande Got Married?!?! Her real-estate boyfriend has become her real-estate husband.
memory lane May 17, 2021
Life As a Halstonette Pat Cleveland shares the true story behind Netflix’s new miniseries.
By Emilia Petrarca
power May 17, 2021
What We Know About Bill Gates’s Friendship With Jeffrey Epstein In the wake of his divorce, questions about Gates’s relationship with the convicted sex-offender have resurfaced.
power May 17, 2021
The Matt Gaetz Scandal Keeps Getting Worse His wingman has pleaded guilty in his federal sex-trafficking case, which likely spells trouble for the Florida Republican.
reproductive rights May 17, 2021
The Supreme Court Will Hear a Case Challenging Roe v. Wade With the court’s new 6-3 conservative majority, the case poses a major threat to abortion rights.
More Stories