Call it having Champagne taste on a beer budget, or just effective advertising, but growing up there were few things I wanted more than a David Yurman cable bracelet. Instantly recognizable and undoubtedly iconic — if you know the cable motif, you know it’s David Yurman — there are few pieces that have the same timeless quality. Surprisingly, the original cable bracelet is not as financially unattainable as you might think (the most simple iteration is $395), but if you’re looking for the next step up and have the budget to match, the brand has released a special Grecian-inspired collection.

Dubbed the “Helena,” the new release revamps the signature David Yurman cable with the addition of pavé diamonds and gold-wire accents for a mixed-metal motif. Named after the mythical figure Helen of Troy, all seven items in the range incorporate the same ancient metal work employed by the Greeks and Romans also known as wire wrapping. The result is a unique rustic look that’s surprisingly versatile and whimsically modern. See below for all of the styles from the new collection and treat yourself. 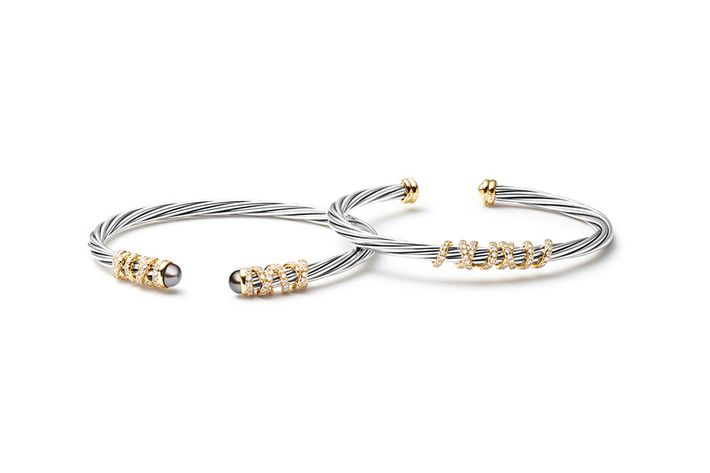 The Quintessential Aspiration Piece Gets a Grecian Update

obamacare Yesterday at 8:28 p.m.
Amy Coney Barrett’s First Ruling Could Be Devastating In two weeks, she and the other conservative Supreme Court justices could rule to gut the ACA — leaving millions of people uninsured in a pandemic.
power Yesterday at 8:10 p.m.
Amy Coney Barrett Is Confirmed to the Supreme Court This cements a 6-3 conservative majority on the Court. Coney Barrett is the third justice chosen by Trump.
power Yesterday at 8:08 p.m.
Donate to an Abortion Fund Right Now If you’re terrified Roe v. Wade will be overturned, it’s the best thing you can do.
By Bridget Read
breakups Yesterday at 7:02 p.m.
Kate Beckinsale Broke Up With Her Crucible Boyfriend Apparently, she and Goody Grace split “some time ago.”
celebrity babies Yesterday at 5:19 p.m.
EmRata Is Pregnant She announced her pregnancy in an essay for Vogue.
scent memories Yesterday at 3:49 p.m.
The Model Who Loves the Smell of Wet Cement Khadijha Red Thunder, a new face of Donna Karan Cashmere Mist, shares her favorite, often cozy, scents.
finer things Yesterday at 3:23 p.m.
Mary Jane, All Grown Up These platform Celine pumps are anything but childish.
bachelor nation Yesterday at 3:14 p.m.
Clare Crawley Has Been Liking Tweets About The Bachelorette Forcing Her to Leave Things just got interesting.
let's makeup Yesterday at 3:05 p.m.
No-Makeup Makeup Queen Bobbi Brown Is Starting a New Line Inspired by Phoebe Philo.
gift guides Yesterday at 3:00 p.m.
56 Christmas Gifts for Any Kind of Mom Whether she’s into cooking, skincare, gardening, or relaxing.
By the Cut
moon news Yesterday at 2:32 p.m.
She’s Wet, Folks Finally, NASA has unveiled its “exciting new discovery.”
ghost court Yesterday at 1:12 p.m.
Can Someone Please Explain to Me the Ghost Laws In ghost terms, The Haunting of Bly Manor is anarchist jurisdiction
fixations Yesterday at 1:00 p.m.
I Think About David Blaine’s Glass-Box Stunt a Lot The American performer was totally unprepared for the British cynicism that greeted his stunt.
By Lale Arikoglu
niche drama Yesterday at 12:48 p.m.
This Is the Best Drama on the Internet Right Now Members of a 331,000-person Crock-Pot Facebook group are in trouble for calling one another’s roasts ugly.
spring 2021 Yesterday at 12:14 p.m.
Watch the Celine Runway Show Livestream  Enjoy!
nyfw spring 2021 Yesterday at 11:33 a.m.
How a Great Collection Comes Alive  Christopher John Rogers launched its first-ever online shop, along with a new campaign.
By Andrew Nguyen
rebecca Yesterday at 10:53 a.m.
What Really Happened With Armie Hammer’s Divorce? Tabloids say his wife found “passionate” texts between him and another woman, possibly his Rebecca co-star Lily James.
coronavirus Yesterday at 9:49 a.m.
COVID-19 Cases Are Yet Again Surging The U.S. just recorded over 80,000 new daily coronavirus cases for the first time since the start of the pandemic.
four long years Yesterday at 7:00 a.m.
The Birth of an Extraordinary Modern Progressive Movement The last four years have been an era of radical right-wing rule in Washington — and of remarkable left-wing populist response.
By Rebecca Traister
the bigger picture Yesterday at 7:00 a.m.
Prospect Park Is the (Only) Place to Be One October weekend of socially distanced socializing.
By Emilia Petrarca
More Stories