Immediately after the election, countless social-media posts and articles suggested women get intrauterine devices (IUDs) before Donald Trump took office and potentially restricted access to birth control. A new report from Vox shows that many women across the U.S. actually did rush out to get that long-acting reversible birth-control method, as IUD prescriptions and procedures increased by 19 percent between October and December 2016.

Analysts from AthenaHealth complied the data set of IUD prescriptions and procedures at the request of Vox, looking at 2,500 doctor offices that use its electronic medical-record services. Each of those offices had also provided IUDs over the past 15 months.

The data showed an increase from 10,850 IUD-related appointments in October to 12,938 in December. The increase showed up in conservative and liberal areas of the country, although it was steeper in areas that supported Clinton in the 2016 election. 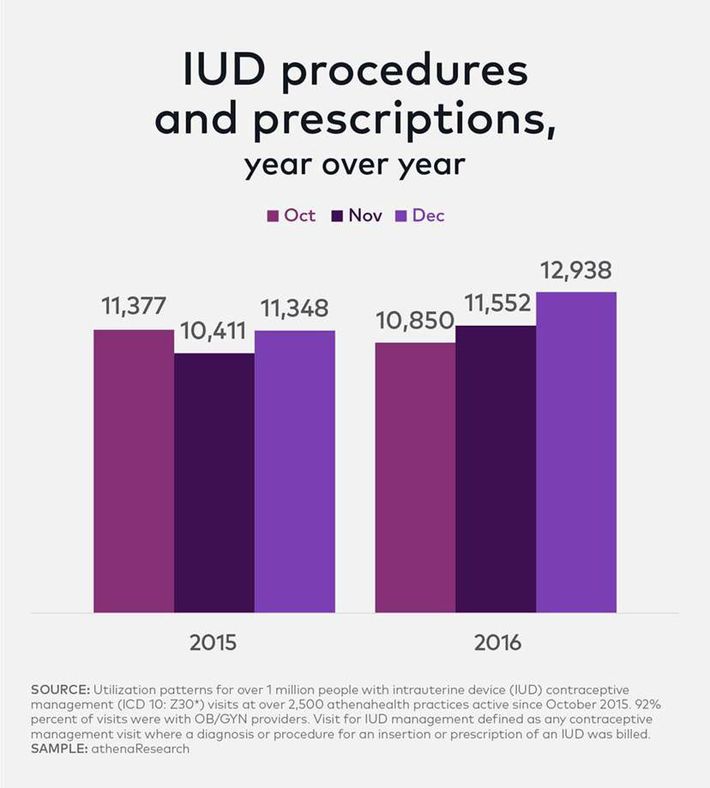 The data also showed that while there was a spike in IUD prescriptions and insertions at the end of 2016, there was no similar increase at the end of 2015. While correlation isn’t causation, the recent rush to get an IUD could stem from fears related to President Donald Trump’s aggressively pro-life platform, in addition to the likelihood that the Affordable Care Act will be repealed. Currently, the ACA offers free access to all FDA-approved forms of birth control, and without it, many expect prices of these methods to surge — particularly the cost of IUDs, which has a national median cost of $1,111, Slate reports.

* In an earlier version of this post, the graph was listed as being from 2013. This has been corrected. The graph is from 2015.

Planned Parenthood Has Seen Demand for IUDs Increase by 900 Percent