Back in the mid-1990s, lawmakers took bold action on gun violence: They eviscerated federal funding to study it. A 1996 appropriations bill passed by the Republican Congress banned the use of any CDC funds to “advocate or promote gun control,” and soon the National Institutes of Health and other agencies were subjected to similar bans. While the language doesn’t expressly prohibit all gun-violence research, the CDC and other agencies have, understandably, decided to play it safe, lest they risk the ire of the bill’s architects and supporters. If you’re an ostensibly apolitical public-health civil servant or researcher, the last thing you want is to be the subject of a congressional “investigation” simply for doing your job.

Unsurprisingly, then, these guidelines have had a profound chilling effect on research into one of the leading causes of death in the United States. There’s a lot we don’t know about the hows and whys of gun deaths — not just homicides, but suicides, which account for about half of all gun deaths — that we would if lawmakers hadn’t crippled federal funding for this vital area of scientific inquiry.

Today, a research letter published in JAMA by David E. Stark, a physician at the Icahn School of Medicine at Mount Sinai Hospital, and Nigam H. Shah, a researcher at Stanford University, offers some of the clearest evidence yet on just how devastating the Republican approach to gun-violence research has been. Stark and Shah decided to dig up data on the mortality rates of the leading causes of death in the U.S., and then compared each cause of death to how much research funding has been spent on it and how many publications were produced as a result.

This led them to produce a couple of extremely depressing graphs: 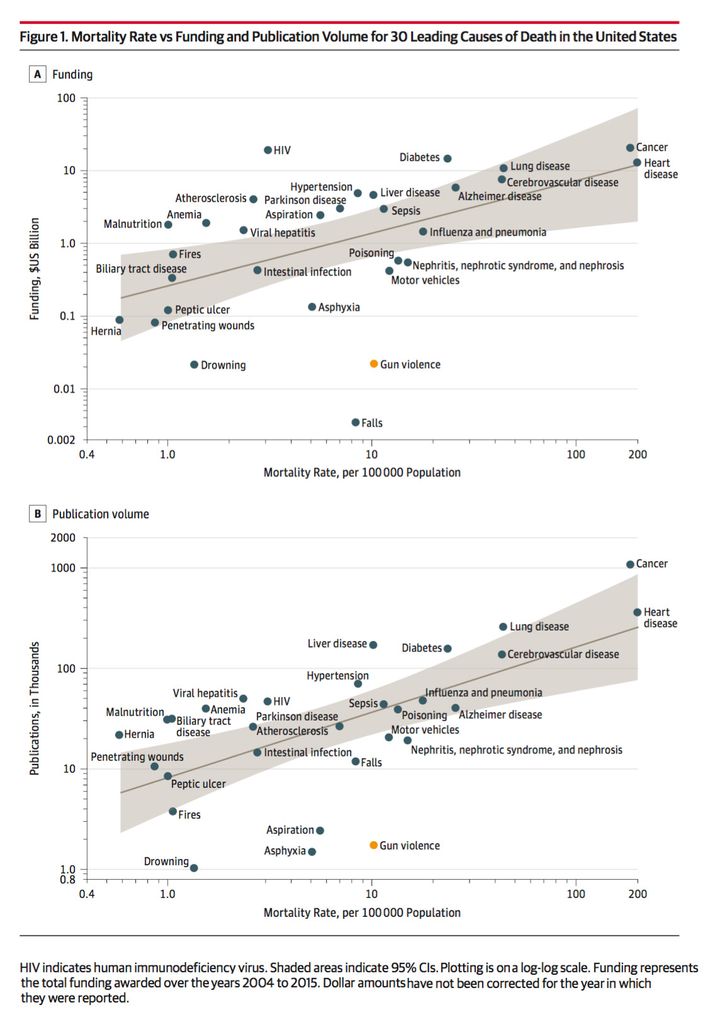 As you can see, gun violence is a total outlier — nothing kills as many people and gets anywhere near so little research attention. In all likelihood, there’s a dire human toll lurking beneath these dry numbers: Given how deadly guns are, two decades of neglected research must have translated into many lives unnecessarily lost.

This particular battle in the broader Republican war on science was an overwhelming, grisly success.

hospitalization Yesterday at 7:41 p.m.
Travis Barker Has Been Hospitalized His new wife, Kourtney Kardashian, is by his side.
5 questions with... Yesterday at 5:10 p.m.
Taraji P. Henson Wants to Move to Spain, Italy, or the South of France “Yeah, ’cause … I don’t know about this place anymore.”
celebrity Yesterday at 5:04 p.m.
Chris Pratt, Noted Bible Quoter, Says He’s Not Religious “I’m not a religious person,” says the man who posts Bible verses on Instagram.
gone sale-ing Yesterday at 4:15 p.m.
Ulta Beauty Is Doing a Sale It’s Never Done Your favorite hair products are on sale thanks to its Summer of Hair Love Event.
maxwell trial Yesterday at 2:42 p.m.
Ghislaine Maxwell Sentenced to 20 Years in Prison The judge ruled that Maxwell “directly and repeatedly and over the course of many years participated in a horrific scheme” of sexual abuse.
life after roe Yesterday at 2:40 p.m.
Major Retailers Are Rationing Morning-After Pills Purchase limits on Plan B are the latest ripple effect of the SCOTUS ruling overturning Roe.
gone sale-ing Yesterday at 2:22 p.m.
Your July 4 Sale Shopping Guide That NuFACE you wanted? It’s on sale.
immigration Yesterday at 1:39 p.m.
46 Migrants Were Found Dead in a Truck Near San Antonio Officials suggested they had overheated in a tractor trailer after being abandoned by the truck’s driver.
abortion Yesterday at 1:18 p.m.
Laura Prepon Recalls Her Choice to Terminate a Pregnancy “Everyone has their own story for seeking out this medical procedure.”
drugs Yesterday at 1:00 p.m.
Tripping Down the Aisle Mushroom microdoses are the new signature cocktails.
By Jenni Avins
abortion Yesterday at 12:10 p.m.
Another GOP Candidate Fails to Understand Rape, Possibly Also Sex Yesli Vega claimed that rape rarely results in pregnancy because “it’s not something that’s happening organically.”
ask a boss Yesterday at 12:00 p.m.
‘The New Hires at Work Are Driving Me Up a Wall’ Clarifying for yourself what you do and don’t need to act on will help make the situation more bearable.
huh! Yesterday at 9:58 a.m.
Ghislaine Maxwell Reportedly Offered Yoga Lessons in Prison A letter written by a fellow detainee characterized the convicted sex offender as “genuine and kind.”
life after roe Yesterday at 9:30 a.m.
How to Protect Yourself When Seeking an Abortion Learn your legal risks and take control of your digital privacy.
life after roe Yesterday at 9:30 a.m.
Don’t Trust the DIY Abortion Advice You See on TikTok These are the risks involved.
life after roe Yesterday at 9:30 a.m.
How to Have a Medication Abortion Where to find the pill and what to expect.
life after roe Yesterday at 9:30 a.m.
The Crisis Pregnancy Center Trap And how not to fall for it.
life after roe Yesterday at 9:30 a.m.
How to Get Help for Your Abortion The abortion mutual-aid network getting patients the funds, travel, and child-care assistance they need.
celebrity June 27, 2022
Jodie Sweetin Won’t Let Police Brutality Stop Her From Protesting The actor spoke out about the viral video of police pushing her to the ground during an abortion-rights protest.
celebrity June 27, 2022
Machine Gun Kelly Reveals He Attempted Suicide in New Documentary He was on the phone with Megan Fox at the time.
More Stories