The FBI put Sadie Barnette’s father on a watch list in 1968, after he founded a chapter of the Black Panther Party in Compton, California. Despite Rodney Barnette’s charitable work with the Black Panthers, like organizing a free-breakfast program for kids, the FBI labeled him as an extremist for his association with the group. Nearly 50 years later, after her father obtained his FBI file through the Freedom of Information Act, artist Sadie Barnette is now reclaiming her father’s story in the exhibit “Do Not Destroy,” which opened Tuesday at Baxter Street at the Camera Club of New York.

“They had my dad fired from his job at the post office because of his involvement in the Panthers,” Sadie Barnette told the Cut during the exhibit’s installation. “The law they used to get him fired was the fact that he was living with a woman he wasn’t married to — even though they had a child together.” She said the FBI classified this as “unbecoming” behavior for a government employee. “That law was actually put on the books by Truman, to get gay people out of jobs in the government. To me, it’s one of those examples where people think, ‘Oh that doesn’t affect me, that law is about somebody else,’ but it can be used on whoever the government deems to be an enemy at the time.”

After debuting at the Oakland Museum of California, “Do Not Destroy” opens in New York with a similar layout: Pages from Rodney Barnette’s FBI file line the gallery walls, describing his daily routines or showing transcribed interviews with family members and his former employers. Sadie Barnette spray-painted some of these pages pink or embellished them with pink and purple gems — symbols of her own role in her father’s story.

The exhibit has been cathartic for both her and her father. “I think he feels a new sense of freedom by exposing these files that were meant to suppress him,” she said. “While we’re celebrating the 50th anniversary of the Black Panthers, I think it’s really important to remember that there are a lot of people who are still imprisoned because of their activism. It’s always important to question the government, because the government works for the people — not the other way around.”

Click ahead to see images from the exhibit. “Do Not Destroy” will be on view at Baxter Street at the Camera Club of New York until February 18. 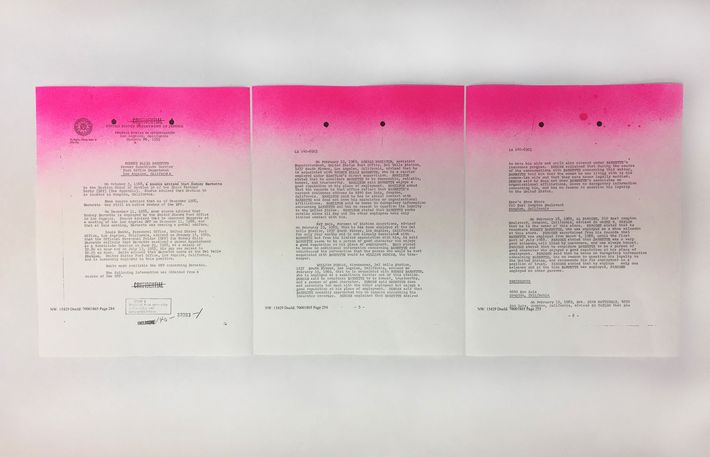 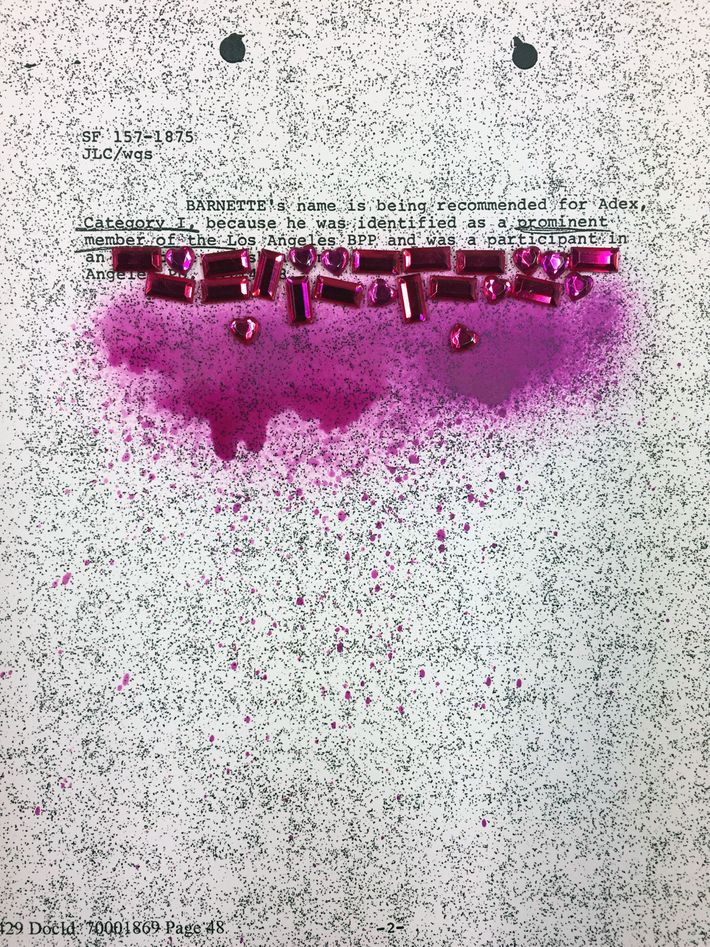 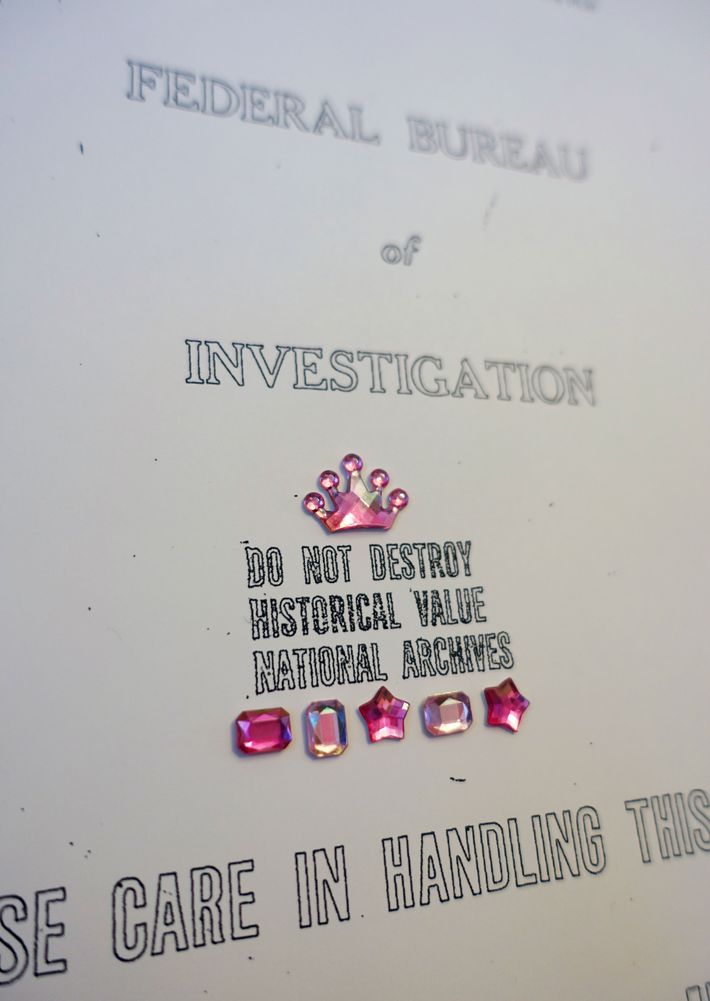 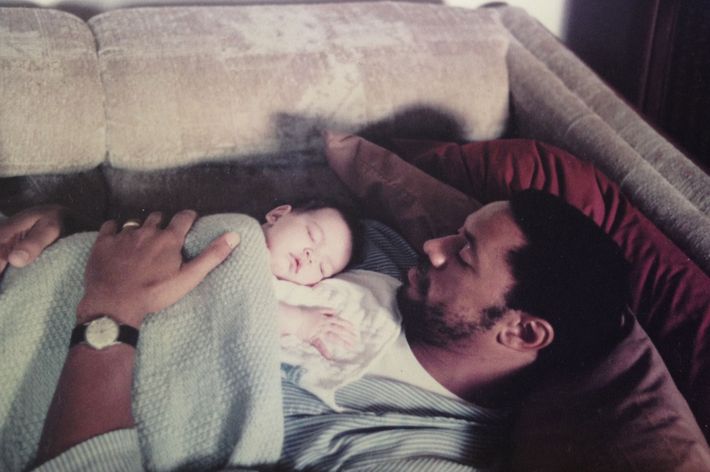 Sadie Barnette with her father. 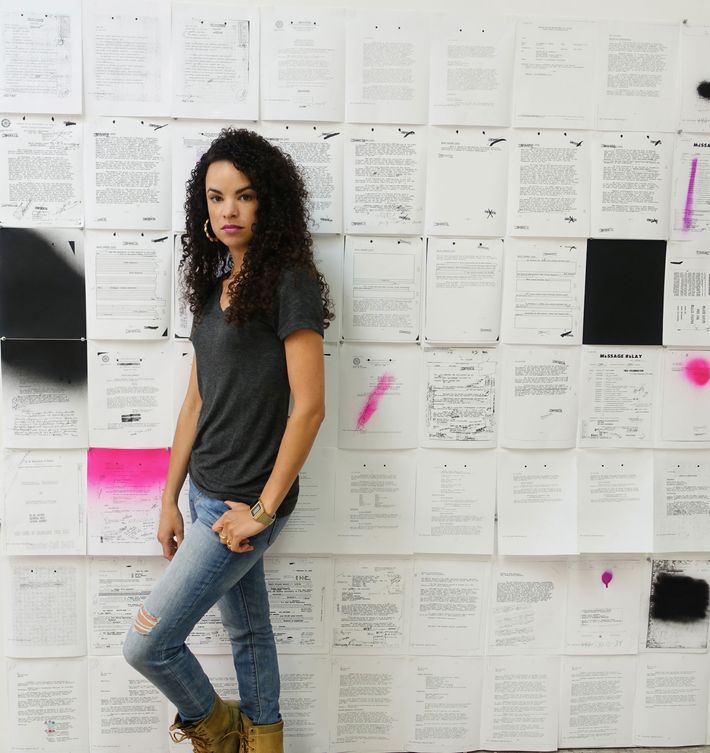 Sadie Barnette with a wall of pages from his FBI file. 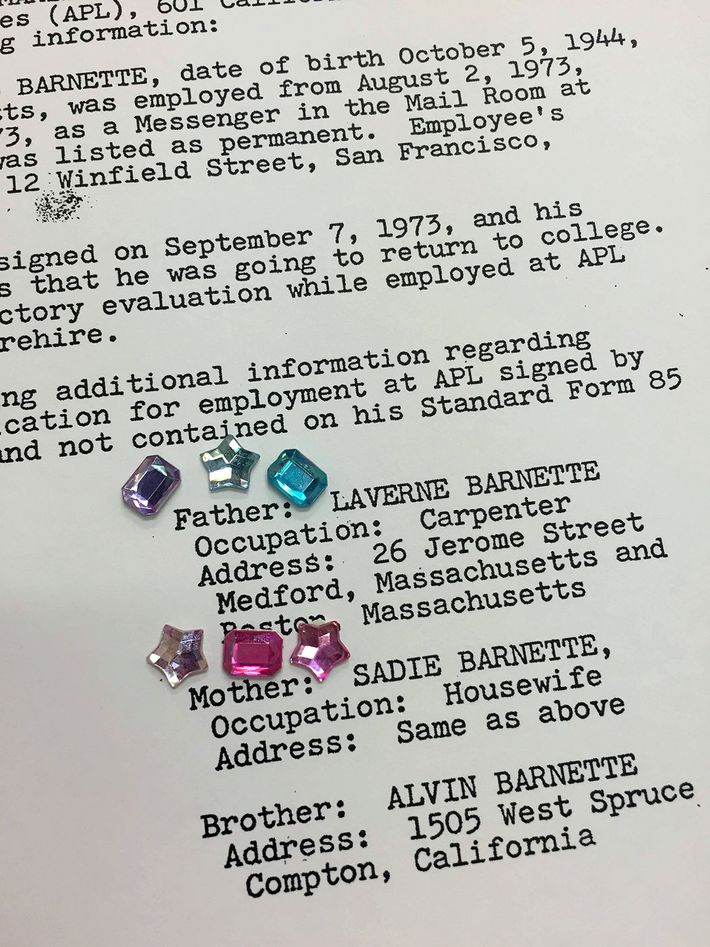 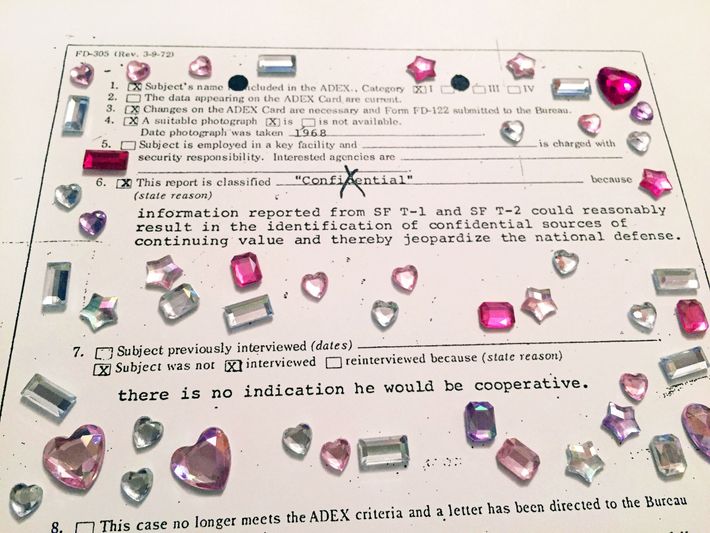 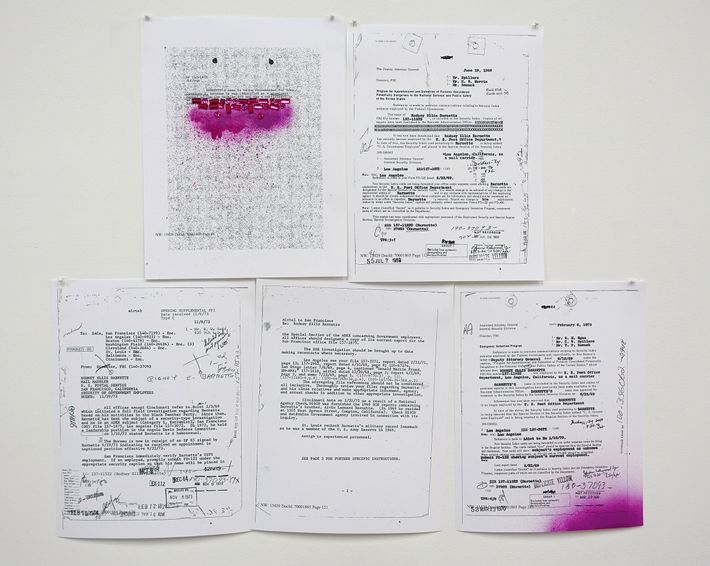 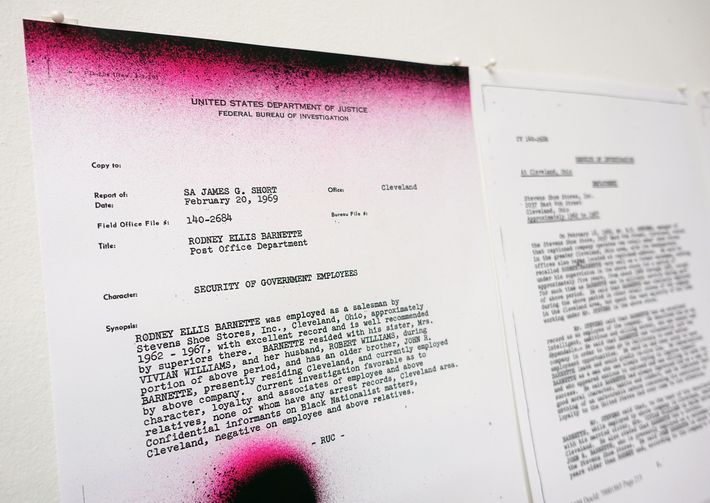 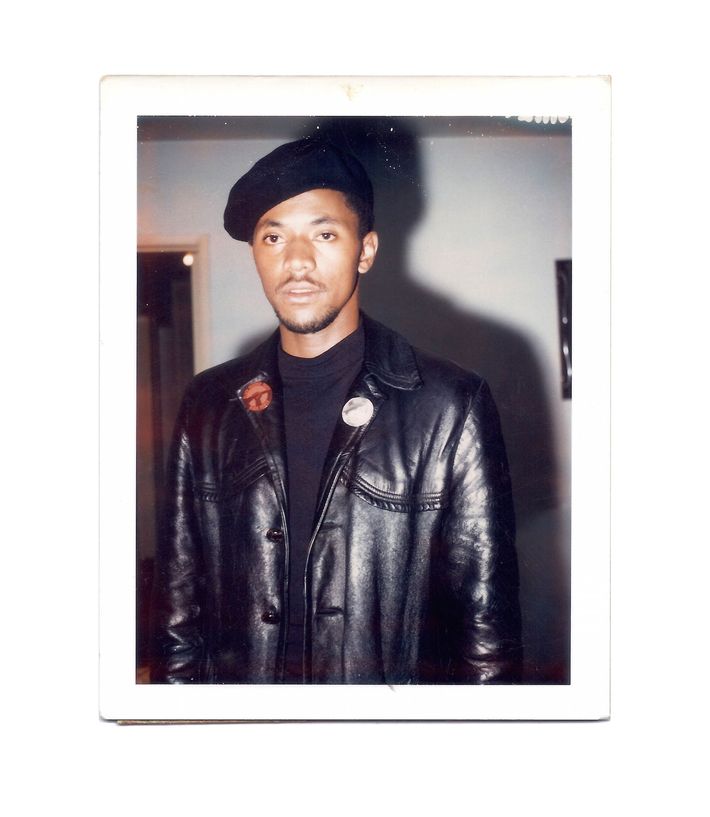 world cup hottie 12:29 p.m.
I’m Watching the World Cup Only for Memphis Depay The Dutch forward (and Lori Harvey’s ex) can get it on and off the field.
celebrity couples 11:00 a.m.
Finally, the Good Morning America Romance We Deserve But tragically, it appears T.J. Holmes and Amy Robach’s flirty relationship got them taken off the air.
keeping up with the royals 10:13 a.m.
Meghan and Harry’s Docuseries Certainly Looks Tense They are ready to tell all again.
chaos 9:14 a.m.
Swifties Are Suing Ticketmaster Over the Eras Ticket Fiasco “Ticketmaster messed with the wrong fan base.”
reasons to love new york 8:00 a.m.
New York Attracts the World’s Most Beautiful People  The only person hotter than my doula and my barista? My mom’s doorman.
By Alyssa Shelasky
reasons to love new york 8:00 a.m.
Bossa Nova Civic Club, Bushwick’s ‘Techno Cheers,’ Came Back You can’t burn down cool.
reasons to love new york 8:00 a.m.
There’s Always Room for a Few More New Yorkers Meeting asylum seekers at Port Authority.
reasons to love new york 8:00 a.m.
No Matter Where You Live, New Yorkers Can Help You Get an Abortion And we’ll pay for it, too.
alexa play 8:00 a.m.
The White Lotus Theme Song Is an Absolute Banger The only music worth listening to right now.
reasons to love new york 8:00 a.m.
How Resale Saved New York Retail Many of the most exciting and original new stores to open recently carry vintage and secondhand clothing.
By Emilia Petrarca
2022 fashion year in review 7:00 a.m.
The 32 Most Absurd Accessories of 2022 From joots to balloon shoes.
how i get it done 7:00 a.m.
How New York Times Parenting Columnist Jessica Grose Gets It Done “Raising the next generation is and should be a concern to everyone.”
astrology Yesterday at 8:30 p.m.
Madame Clairevoyant: Horoscopes for the Week of December 5 A full moon in Gemini may run amok.
By Claire Comstock-Gay
sex diaries Yesterday at 8:00 p.m.
The Vermont Woman Who Blows Off Work for a Tinder Date This week’s sex diary.
society pages Yesterday at 2:01 p.m.
Chaos Reigned at Art Basel A surge of outsize egos descended on Miami in the name of art (?) last week.
By Marlowe Granados
mom-ologues Yesterday at 10:03 a.m.
Keke Palmer Turned Her SNL Monologue Into a Pregnancy Reveal Baby, this is Keke Palmer’s baby bump.
gone sale-ing Dec. 2, 2022
10 Things You Don’t Have to Pay Full Price for This Weekend Deals from Neiman Marcus, Farfetch, Sephora and more.
art basel Dec. 2, 2022
Suchi Reddy Actually Likes Art Basel for the Art Her latest installation was inspired by the Miami clouds.
are u coming? Dec. 2, 2022
Art Basel Was Made for Madonna And I’m almost too hung-over to write this dispatch.
By Brock Colyar
5 questions with... Dec. 2, 2022
Meet the Black Woman Who Built a 15-Year-Old Fashion Business Sherri McMullen’s Oakland luxury store is one of a kind. Here’s how she did it.
More Stories