Psychology is mired in a replication crisis: Many famous, established findings that experts had assumed to be robust have, in the light shed by newer and bigger and more sophisticated follow-up studies, been revealed as rather flimsy. But what about the very basic, Psych 101 stuff taught in introductory textbooks? That stuff’s all on safe ground, right?

Maybe not. In a paper published last month in Current Psychology by Christopher Ferguson of Stetson University and Jeffrey Brown and Amanda Torres of Texas A&M, the authors evaluated a bunch of psychology textbooks to see how rigorously they covered a bunch of controversial or frequently misrepresented subjects. The results weren’t great.

In spring of 2012, Ferguson and his colleagues solicited and received 24 popular introductory textbooks, and then got to work evaluating them. Specifically, they evaluated those textbooks’ coverage of seven “controversial ideas in psychology” — ideas where there’s genuine mainstream disagreement among researchers — and also checked for the presence of five well-known scientific urban legends that, as far as the psychological Establishment is concerned, have been debunked.

The seven controversial ideas were a connection between media violence and real-world behavior; stereotype threat (the idea that if you remind someone of their membership in a marginalized group, their performance might suffer at tasks for which that group is negatively stereotyped); the notion of a recent “narcissism epidemic”; a correlation being being spanked and acting in an aggressive manner — or experiencing other negative outcomes — later in life; the theory that everyone has multiple types of intelligence; the theory that evolutionary factors play a meaningful role in our sexual behaviors; and the claim that antidepressants generally “work” to alleviate depressive symptoms. The scientific urban legends were the overblown and false version of the Kitty Genovese “bystander effect” story; an old myth about Korean POVs being fully brainwashed by their captors; the belief that “Broca’s area” in the brain was actually discovered by the researcher Paul Broca; the myth that we “only use” 10 percent of our brains; and the so-called “Mozart Effect,” which holds that kids who are exposed to classical music may benefit in the form of enhanced cognitive abilities.

For each myth or issue, the researchers determined, based on a system they set up, whether a given textbook covered that issue or myth in a “biased,” “partially biased,” or “unbiased” manner, with “unbiased” basically meaning that the textbook communicated the current consensus among researchers.

Here’s what they found: 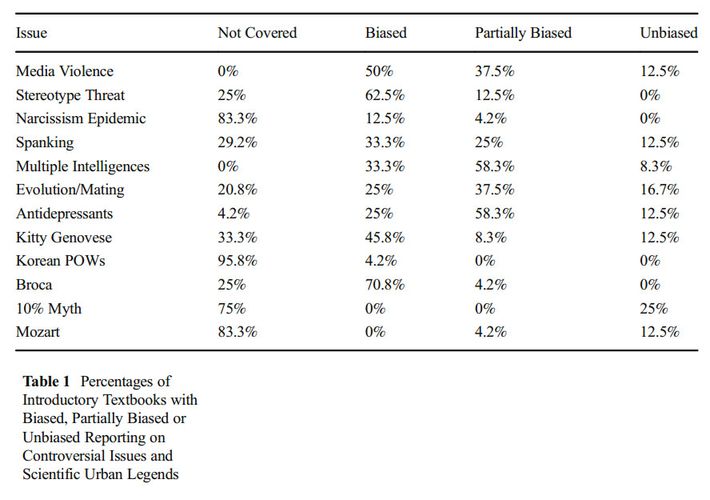 It’s worth pointing out that Ferguson and his colleagues point out that this isn’t a random, representative sample of subjects, but rather that there was some arbitrariness to what they picked and why. Still, this is a useful first-pass attempt at understanding potential problems with modern psych textbooks, and it’s distressing — just look at the values in the “unbiased” column. Ferguson and his co-authors’ findings suggest that many textbooks are doing a really lackluster job at imparting an appropriate level of nuance and complexity.

Why is there so much questionable material in these textbooks? Ferguson and his colleagues have a couple theories. One is that psychology is a pretty wide-ranging field, and an expert in one area might not know enough in other areas to separate overhyped claims from sturdy ones — imagine being a personality psychologist who, for the purpose of writing an introductory textbook, has to pretend to be an expert on Skinnerian behaviorism. To a certain extent this is a challenge for any introductory textbook writer in any field, of course, but in “hard” sciences like physics or geology, you just won’t find all that much disagreement in the stuff taught at the 101 level.

Another factor, the authors speculate, is that the authors of introductory psychology textbooks might feel an urge to “sell” young students on the discipline, given that reading the textbook might be those students’ first real exposure to academic psychology. As a result, they may be “unconsciously prone to overcompensating by overstating the conclusiveness of psychological research and understating its limitations or theoretical controversies” — especially given that the authors of textbooks themselves tend to “have chosen their field for the love of the material and may experience natural human biases to present it as positively, even unduly so, as possible.”

So it’s complicated, in other words. But whatever the cause, given that psychology is mired in a replication crisis which is calling many of its most established-seeming findings into question, the fact that there are so many lackluster textbooks floating around is not good.

There’s a Problem With a Bunch of Psychology Textbooks

celebrity 21 mins ago
Britney Spears Just Wants Some Privacy The star confirmed police were called to her home by fans.
celebrity 7:08 p.m.
Ziwe and Lisa Rinna Brought RHOBH to Paris Fashion Week They were “ready to own it” in Mugler.
power 6:11 p.m.
Harvard Students Walk Out on Professor Accused of Assault Over 100 students continued to protest the reinstatement of John Comaroff, who has been accused of sexually harassing and assaulting female students.
couture spring 2023 5:20 p.m.
Seduction and Suiting at Couture Fashion Week Shows from Chanel and Gaultier by Haider Ackermann were fresh.
identity 2:22 p.m.
The Monterey Park I Remember Spending family time in the Asian-majority city helped me proudly embrace my identity.
sex toys 12:33 p.m.
27 Best Sex Toys You Can Buy Online Reviewers don’t lie.
elvis 11:48 a.m.
Austin Butler Finally Gives Credit Where It’s Due The Elvis star admitted that his ex Vanessa Hudgens was the “friend” who manifested his biggest role.
kardashian kids 11:07 a.m.
North West Is Making Her Hollywood Debut The 9-year-old will lend her voice to a character in the Paw Patrol sequel.
my two cents 8:00 a.m.
‘Do I Need to Attend All of My Boyfriend’s Friends’ Weddings?’ Start by examining your priorities.
By Charlotte Cowles
how not to f*ck up your face 8:00 a.m.
In Defense of ‘Good Enough’ Aging When good enough is plenty good. Plus, are you dealing with thinning lashes?
celebrity Yesterday at 9:04 p.m.
Gisele Bündchen and her Jujitsu Instructor Are Riding Horses Now Meanwhile, Tom Brady is still considering his retirement.
celebrity Yesterday at 8:01 p.m.
Julia Fox Has a Mice-Friendly Apartment She mentioned her rodent roommate during an apartment tour on TikTok.
ask a beauty editor Yesterday at 3:57 p.m.
Should I Worry About UV Damage While Getting a Gel Manicure? A recent study found that exposure to a UV nail-polish dryer led to cell deaths. We spoke to experts about how to protect yourself.
weight loss Yesterday at 3:47 p.m.
Chelsea Handler Says She Didn’t Realize She Was on Ozempic “My anti-aging doctor just hands it out to anybody.”
where did you get that? Yesterday at 3:26 p.m.
Aleali May on Vintage Shopping, Jordan 1s, and Cargo Pants She shares her wardrobe essentials and styling tips.
school shootings Yesterday at 2:50 p.m.
A 6-Year-Old Shot His Teacher — Now What? The teacher’s lawyer claims the school administration was warned three times that the 6-year-old had a gun.
obsessive tester Yesterday at 2:46 p.m.
The 23 Very Best Foundations for Your Skin Whether you want to look airbrushed or like you’re not wearing makeup at all.
power Yesterday at 2:14 p.m.
What to Know About the New Brett Kavanaugh Documentary After debuting at Sundance, Justice filmmakers say they’re already getting new tips.
why is your skin so good Yesterday at 12:46 p.m.
How John Legend Gets His Skin So Good He and his wife, Chrissy Teigen, often share their skin-care products.
power Yesterday at 12:08 p.m.
Esmé Bianco Settles Sexual-Assault Lawsuit Against Marilyn Manson The Game of Thrones actress agreed to settle “in order to move on with her life and career,” her lawyer said in a statement.
More Stories