The oldest trick in the law-enforcement book is the “good cop, bad cop” routine. One plays nice, the other plays rough, and soon enough the perpetrator coughs up the info. It makes for great film, too — whether Training Day, L.A. Confidential, or most brutal of all, The Lego Movie.

It turns out that this routine has some strong psychological underpinnings. According to a new paper in Frontiers in Psychology, people are more likely to mindlessly comply with things when they’ve just experienced an emotional swing of the good cop, bad cop variety. This is called the “emotional seesaw phenomenon,” where “the sequential experience of positive and negative emotions makes people more susceptible to persuasive attempts than the experience of either type of emotion alone,” write authors Francesca D’Errico at Uninettuno University in Italy and Cornelia Wrzus at the University of Mainz, Germany.

Previous experiments have indicated that a well-executed emotional seesaw makes people more likely to give money, do charity work, or watch a stranger’s luggage. For this paper, the authors wanted to ferret out what’s happening cognitively that leads to such deference.

While the researchers did two experiments for this paper, the results on the second were messy, so let’s focus on the first one, where 79 visitors to a university library were recruited and then promptly plopped in front of a computer. They were asked to take a common-knowledge quiz of five multiple-choice questions, and promised an automatic €1 for their time and the possibility of winning up to an additional €2.50 if they did well.

The participants were split into an experimental (seesawing emotions) and control (just one emotion) group. Emotional states were induced by difficult questions (for a negative mood) and easy questions (for a positive mood). While the control group was manipulated to feel just positively or negatively the whole time, the seesaw group had a dastardly trick pulled on them: The payouts were reversed, where they got €0 for every right answer and €0.50 for every wrong one. This violated common-sense expectations — that getting answers right gets rewarded — thus prompting the emotional seesaw phenomenon.

After all that, participants were approached by one of two confederates. They introduced themselves and asked if they’d like to sign their names to what the researchers called a “nonsensical petition” — one demanding that every student have the right to select which public transit they want to get to class. (“This is a nonsense petition because people can choose which means of transportation they want to take,” the authors are careful to note). Then, after that, participants completed a pair of questionnaires, one that asked them to recall information about the details of the petitioner — like hair color and gender — and another with demographic questions like age, gender, and education.

True to the hypothesis, seesawers were less likely to question the senseless petition and more likely to sign it. They also remembered less about the petitioner and the petition itself than the control group, as indicated in the chart below. 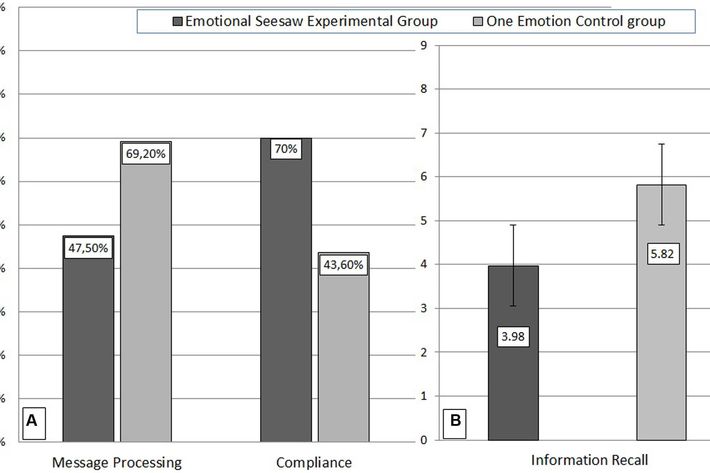 This also begins to get at why the emotional seesaw makes people so easy to convince: as the authors write, “a higher inclination toward persuasion that occurred apparently because of shallower information processing.” Like the opposite of meditation practice, the swings produce “mindlessness” — or not thinking much about what’s going on around you. The mindlessness produces compliance.

This finding obviously can’t be enshrined as a great truth about the human condition just yet — more research will need to be done — but it provides a fascinating insight into how the swirling storms of emotion can eat up the bandwidth of cognition. According to this smartly designed experiment, when your feelings are pulled in opposite directions, there’s not a lot of attention left over to engage with whoever is trying manipulate you, whether good cop, bad cop — or senseless petitioner.