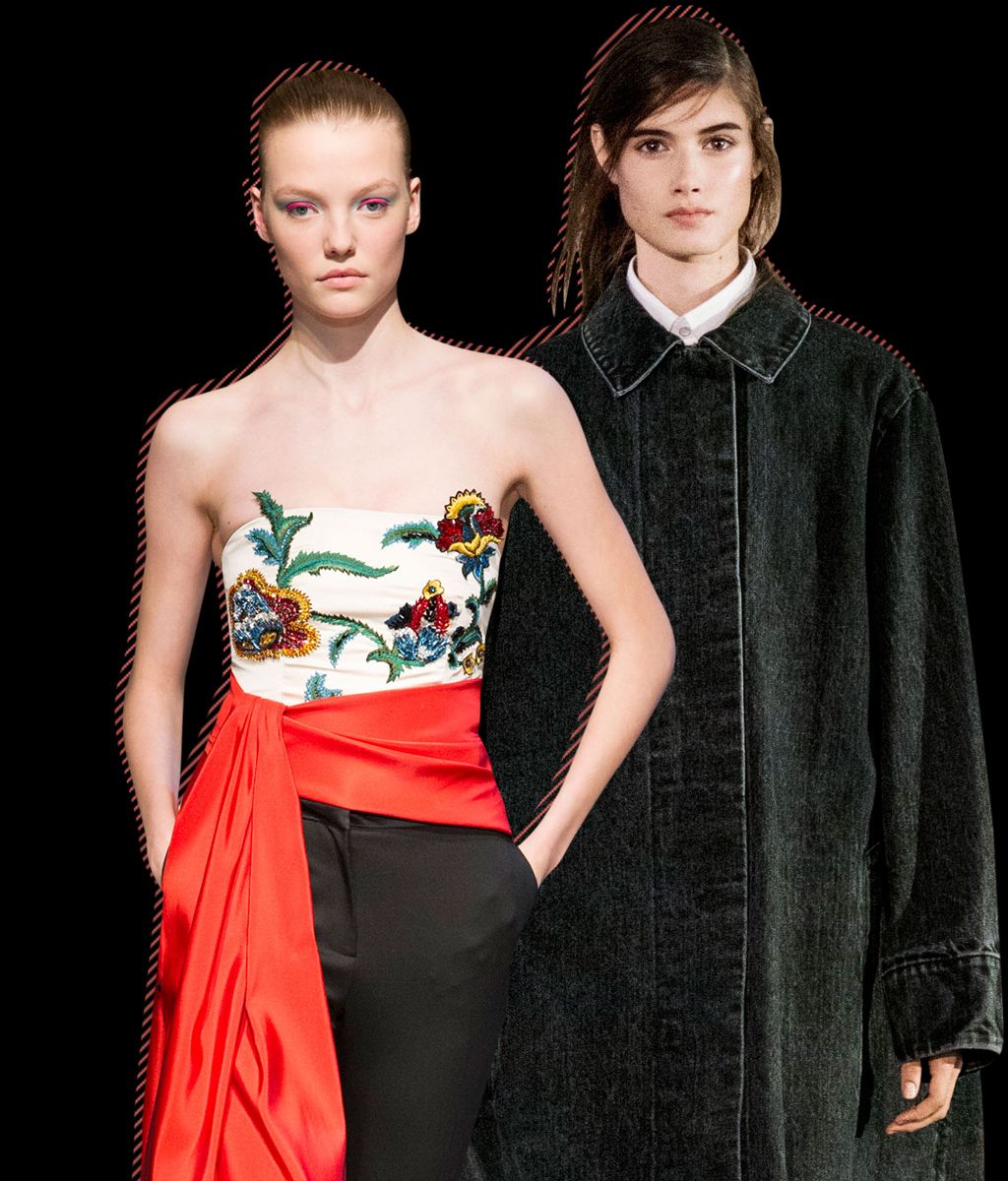 Laura Kim was remarkably sanguine at the Oscar de la Renta after-party last night at the Gramercy Park Hotel, given the set malfunction that occurred during the second of the ambitious back-to-back shows — first for their label Monse and then for Oscar, where they are co-creative directors — staged by her and her design partner, Fernando Garcia. The set was a corridor of doorways, paved by black-and-white tiles, which were surrounded by sparkling gray curtains for the Monse show. Unfortunately for half the audience — and despite practice runs by its creator, Stefan Beckman — part of the automated curtain got stuck and refused to draw back just as the Oscar segment began.

Her Zen calm in the face of disappointment, her ability to ride out a lawsuit brought last year by Carolina Herrera (who briefly employed both Kim and Garcia), and her enormous work ethic seem to guarantee that Kim will be successful. Then, too, she and Garcia are steeped in the world of Oscar. They worked with him for years before his death, but were passed over as his successors, with the job initially going to Peter Copping, a European designer (hence the brief move to Herrera). They know his humor, his taste, his clients. There’s no one better to design one of the last of the glamorous American labels.

The curtain snafu, however, revealed a rookie mistake. Kim and Garcia took on way too much with this debut. Although a twofer seemed a good idea in theory — and a way to show that they could design for distinct labels — it meant that people had to sit for a long time in a stuffy dark room. Kim and Garcia are naturally ambitious people, but they should have taken on fewer styles, especially at Oscar — dialed back their zeal a bit and concentrated more.

A number of looks, notably bustiers with cigarette pants and stretch tops and leggings in geometric or striped jacquards under car coats, recalled styles of Raf Simons at Dior. This was somewhat surprising to me, because for one thing, those Dior looks have already been widely copied, and for another, Kim and Garcia have already broken some ground with Monse, where their twisted and off-the-shoulder shirts started a trend. It would also be nice to see more ease in the Oscar collection, both in the fit and the overall attitude. Lower the height of some of the heels: The most modern thing today in fashion is a bit of polish without obvious effort.

Where Garcia and Kim succeeded was in giving Oscar a more youthful imprint without losing the brand’s uptown identity. This was especially clear in cocktail clothes, like a beautiful, all-over embroidered yellow-gold strapless mini with a teacup skirt, and a flower-embroidered off-white bustier with a red silk-faille sash and black gabardine trousers. Also strong were super-light coats — not just the car coats in sponge wool but also dyed lamb with a gold-foil finish inside. And the designers had no problem, I thought, translating their mentor’s love for the over-the-top number, like a coat dress of sheared mink on top and fox for the skirt, and a crystal gardenia belt buckle in between. This was something Peter Copping could never master.

Monse was generally good, despite one too many floating belt straps and Byron ruffles. The standout looks were suede and curly-lamb bomber jackets, and cold-shoulder columns in velvet or satin. But the news, for some time, will be at Oscar. It’s bigger, more challenging, with a legacy of ideas and images that Kim and Garcia have only just begun to mine.

For me, the clear winners of the day were Mary-Kate and Ashley Olsen of The Row, and Mike Eckhaus and Zoe Latta. What could possibly unite the almost pretentiously understated luxury of the Olsens with the decidedly low-energy funk of Eckhaus Latta? Both sets of designers seemed to sense this was a moment not to be too designer-y. Latta told me that she and Eckhaus stopped working in November, discouraged by the election, and then began again in January. “We just designed what we wanted,” Latta said, with less concern than last season about ticking commercial boxes.

The results were wonderfully serene and indifferent, with boiled knits, slate-colored satin pants, soft fleece tops in orange and pink that draped nicely in back, and a print made from recycled ivory brocade on which Latta and Eckhaus had placed postage-stamp-size photos of random stuff, including portraits. Used for a suit and a mini shift, the print seemed so personal — were the photos mementos? — and yet coldly, gracefully abstract.

The Row was all in solids — black, navy, white, warm brown — and the majority of looks involved masculine tailoring, shown with paddock-style boots. There was an almost defensive air about the clothes as coats and jackets, tightly cinched with wide belts, came out over matching trousers and the practical ankle boots. But then it became clear what the Olsens were offering — an adaptable wardrobe, with a slouchy black pantsuit and one with a more narrow fit, if that style is your thing. A long belted wool leather coat. Or a duster in crisp stonewashed denim. A black shirt or a white shirt.

This uniform way of dressing is hardly new for the Olsens, and it’s a story begun by Giorgio Armani and finessed by Jil Sander and Helmut Lang, but the sisters are certainly hitting it again at the right time.

It’s funny that Jack McCollough, after the Proenza Schouler show, said, “This is like our anti-ease collection. We were sick of everyone talking about ‘ease’ in fashion.” He laughed. “I mean, get out of your pajamas!”

Well, Proenza was not exactly at the pj level on Monday, but the clothes were plenty easy — and McCollough and Lazaro Hernandez have a tendency to complicate things. There were still kinks — dresses or tops in a melange of metallic strips, cutouts, or splatter prints — but the day clothes were among the best they’ve ever done, in particular tough leather coats and jackets with curly fleece collars, silver metallic pants, and a gorgeous black wool dress, simple and long in the body, with one sleeve seeming to detach at the shoulder.

celebrity 23 mins ago
Britney Spears Just Wants Some Privacy The star confirmed police were called to her home by fans.
celebrity 7:08 p.m.
Ziwe and Lisa Rinna Brought RHOBH to Paris Fashion Week They were “ready to own it” in Mugler.
power 6:11 p.m.
Harvard Students Walk Out on Professor Accused of Assault Over 100 students continued to protest the reinstatement of John Comaroff, who has been accused of sexually harassing and assaulting female students.
couture spring 2023 5:20 p.m.
Seduction and Suiting at Couture Fashion Week Shows from Chanel and Gaultier by Haider Ackermann were fresh.
identity 2:22 p.m.
The Monterey Park I Remember Spending family time in the Asian-majority city helped me proudly embrace my identity.
sex toys 12:33 p.m.
27 Best Sex Toys You Can Buy Online Reviewers don’t lie.
elvis 11:48 a.m.
Austin Butler Finally Gives Credit Where It’s Due The Elvis star admitted that his ex Vanessa Hudgens was the “friend” who manifested his biggest role.
kardashian kids 11:07 a.m.
North West Is Making Her Hollywood Debut The 9-year-old will lend her voice to a character in the Paw Patrol sequel.
my two cents 8:00 a.m.
‘Do I Need to Attend All of My Boyfriend’s Friends’ Weddings?’ Start by examining your priorities.
By Charlotte Cowles
how not to f*ck up your face 8:00 a.m.
In Defense of ‘Good Enough’ Aging When good enough is plenty good. Plus, are you dealing with thinning lashes?
celebrity Yesterday at 9:04 p.m.
Gisele Bündchen and her Jujitsu Instructor Are Riding Horses Now Meanwhile, Tom Brady is still considering his retirement.
celebrity Yesterday at 8:01 p.m.
Julia Fox Has a Mice-Friendly Apartment She mentioned her rodent roommate during an apartment tour on TikTok.
ask a beauty editor Yesterday at 3:57 p.m.
Should I Worry About UV Damage While Getting a Gel Manicure? A recent study found that exposure to a UV nail-polish dryer led to cell deaths. We spoke to experts about how to protect yourself.
weight loss Yesterday at 3:47 p.m.
Chelsea Handler Says She Didn’t Realize She Was on Ozempic “My anti-aging doctor just hands it out to anybody.”
where did you get that? Yesterday at 3:26 p.m.
Aleali May on Vintage Shopping, Jordan 1s, and Cargo Pants She shares her wardrobe essentials and styling tips.
school shootings Yesterday at 2:50 p.m.
A 6-Year-Old Shot His Teacher — Now What? The teacher’s lawyer claims the school administration was warned three times that the 6-year-old had a gun.
obsessive tester Yesterday at 2:46 p.m.
The 23 Very Best Foundations for Your Skin Whether you want to look airbrushed or like you’re not wearing makeup at all.
power Yesterday at 2:14 p.m.
What to Know About the New Brett Kavanaugh Documentary After debuting at Sundance, Justice filmmakers say they’re already getting new tips.
why is your skin so good Yesterday at 12:46 p.m.
How John Legend Gets His Skin So Good He and his wife, Chrissy Teigen, often share their skin-care products.
power Yesterday at 12:08 p.m.
Esmé Bianco Settles Sexual-Assault Lawsuit Against Marilyn Manson The Game of Thrones actress agreed to settle “in order to move on with her life and career,” her lawyer said in a statement.
More Stories