While they posed for photos, Bella Hadid prepped backstage.

Robert De Niro’s voice opened the show’s soundtrack with an excerpt from the 2015 film Ellis. De Niro plays an immigrant at Ellis Island Immigrant Hospital in the short film; in the film’s song “Winter Morning II,” which played tonight, his character explains why he came to America: “I arrived here one winter morning, or maybe it was spring. I can’t remember anymore. The mind plays tricks.” 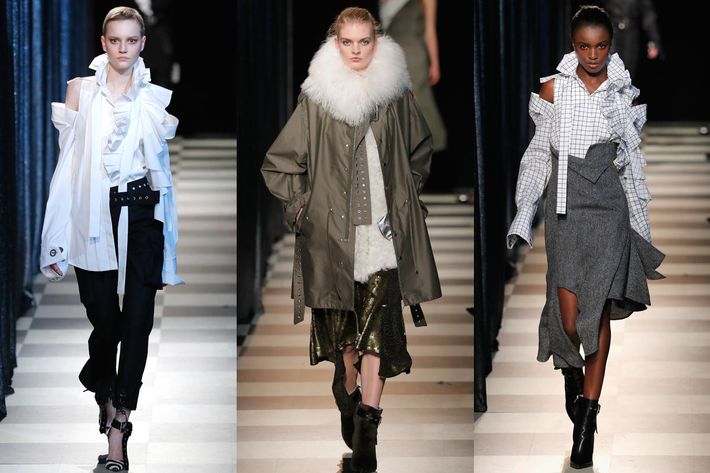 @gucciwestman used a sparkly brown shadow on the eyes along with some of MAC's metallic lipstick in Metalhead tapped into the center of the lid. Clear lipgloss was used on eyelid and under eye for a wet, glossy eye. #nyfw #makeupartist #monse #instamakeup #backstagebeauty #MAC #makeupartistmagazine

After the last Monse model, lights faded to black and our editors watched the silver curtain fail to open in the dark room. This was meant to be a “big reveal,” according to reports. But just a single spotlight flashed to mark the Oscar de la Renta show’s start. A few gold-embellished black power suits opened and gave way to lots of striking colors. One bubblegum-pink coat is sure to be an Instagram hit.

These jewel-encrusted thigh-high boots were a lavish statement piece:

Bella Hadid closed the show in a strapless silky black gown with a slit lined in jewels.

Two lines of models walked a final lap, passing each other, before Kim and Garcia lapped the catwalk and waved to the crowd.

Garcia picked up one silver bauble that fell from a dress or a suit and threw his hands in the air. They left the runway together.