In January, at the Fall 2017 men’s show in Paris, super-serious luxury company Louis Vuitton debuted a runway collection in collaboration with the famous skate-brand Supreme. Comprised of a whopping 23 pieces, it included a denim jacket ($1,974), a duffel bag ($2,345), and travel trunk ($6,171) — and the repeating LV monogram emblazoned with Supreme’s red-box logo. Menswear blogs went bananas. Hysterical critics called it a “murder-suicide” for two brands that had a famously contentious relationship. Seventeen years ago, Supreme made skate decks that bore more than a passing resemblance to LV’s signature monogram design. Although the decks were beloved by collectors, Vuitton sent a cease-and-desist. But the collaboration makes perfect sense if you look at the trajectory of both streetwear and luxury, and these two brands in particular.

Supreme may technically be a skate brand, but it operates much more like a luxury fashion label. In fact, Vuitton and Supreme share more than a few marketing strategies. Both traffic in scarcity. Both have harnessed cool through well-chosen artists’ collaborations (Supreme with contemporary American artists Marilyn Minter, George Condo, Jeff Koons; Louis Vuitton with international pop-artists Sylvie Fleury, Yayoi Kusama, Takashi Murakami). Both represent the pinnacle of taste — albeit in different socioeconomic strata. But perhaps the most obvious overlap is the way both Supreme and Vuitton let their simple, repetitive logos do all the work for them. A good logo, when well applied, will take you pretty far. That’s why the collaboration is funny, brilliant, and a bit of a troll all at once. It’s a naked admission of why people buy the things they buy. Signaling. The question of whether the collaboration benefits Supreme or Vuitton (or neither) has the whiff of out-of-touch snobbery — it’s a partnership of equals.

Over the years, Supreme has steadily become a reliable player in the firmament of menswear. No matter where your tastes fall on the uptown/downtown-flashy/understated xy-plane — Supreme is cool. Except for the occasional business story, it’s largely ignored by the fashion press, and eschews most advertising other than street posters. Though streetwear sites will cover “‘Preme” relentlessly and breathlessly, you will rarely see the brand in fashion shoots because there’s no point — the clothes sell out immediately. With weekly drops coming out in limited quantities, an avid shopper would have to set up a bot for Thursdays at 11 to have any chance of buying anything. 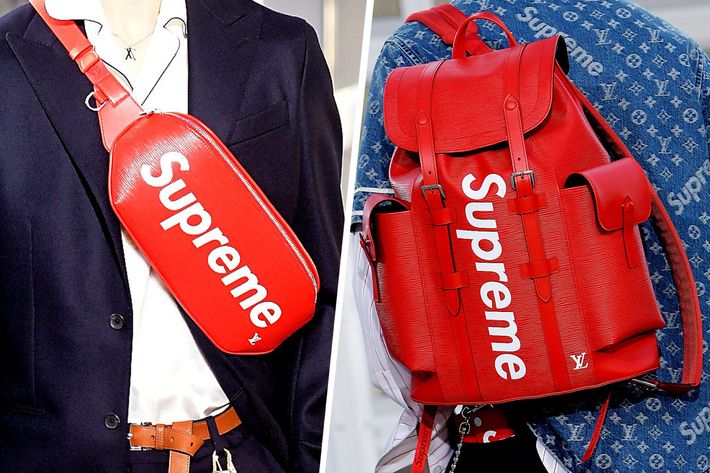 Credit for Supreme’s enduring hipster-status belongs to founder James Jebbia, who, since 1994, has been a rigorous steward of the brand. British-born and notoriously press-shy, Jebbia launched Supreme in New York while working at Stüssy, another skate-juggernaut of the early 1990s. In direct contrast to the dirty, downtown skaters that first wore his clothes, the logo was clean, industrial, and referenced Barbara Kruger’s bold-red-block-with-white Futura lettering (“I shop therefore I am”).

Unlike brands that diluted their cachet through licensing in the ’70s and ’80s (Halston, Gucci, and YSL), Supreme has always been fastidious about controlling its product and image. “Supreme followed that old-fashioned concept of staying the course,” says Cathy Horyn, the Cut’s fashion-critic-at-large. “It never looks like it’s trying too hard — it has authenticity and isn’t over-merchandised or overproduced because anytime you overproduce, you’re in trouble.”

There are only ten Supreme stores in the world — six in Japan, one in Paris, one in London, one in Los Angeles, and the original in New York. Contrast that with the 3,300 Gaps worldwide — and more than 500 Burberrys (not to mention the myriad department stores and online merchants where you can find the brand.) Jebbia has said that if he knows Supreme can sell 600 pieces, he will make 400.

That mentality of growing a business incrementally, of fiercely controlling where product can be obtained, of shrouding yourself in secrecy (Supreme didn’t respond to multiple interview requests) is anathema today. Nowadays, brands become flush with venture-capital funding, inundate us with Facebook ads, and compete for more “followers,” a better mobile experience, and additional SKUs until it’s finally time to cash out. “Supreme realized that bigger isn’t better — better is better,” says Andy Spade, brand consultant and co-founder of Partners & Spade, and co-founder of Kate Spade. “I work with a lot of companies that are just like, ‘How do we grow?’ Supreme could quadruple or grow ten times in size and people would buy it — but they haven’t.”

“It’s thinking small,” says designer Steven Alan (who also opened his first store in Soho in 1994), “and resisting the temptation to oversaturate the market. But Supreme is not just a New York phenomenon — it’s in Japan and Korea and China and Europe, where who knows how the numbers work out.” Scarcity, though (at least in the United States), has helped Supreme weather more than two decades of upheaval in the fashion business, not to speak of 9/11 and 2008.

And yet the limited-edition model doesn’t truly explain Supreme’s appeal. Supreme is nothing and Supreme is everything — its very lack of design is its greatest strength. A piece of Supreme clothing is a vessel, relying on its wearer to animate it with meaning. It’s why the same Supreme tee looks as effortless (and uniquely so) on Kate Moss as it does on Mike Tyson as it does on Neil Young as it does on Kermit the Frog. “It’s very subtle,” says Alan. “I think the ostentatiousness of a lot of luxury brands are getting challenged, even when they used to be popular in, say, Japan or China. But with Supreme, I can wear it; my son can wear it. That is a very difficult thing to do.”

If Hermès is caviar and Uniqlo is celery, Supreme would be butter: a luxury item with a populist sensibility that enhances whatever it touches. Supreme x Levi’s. Supreme x Nike. Supreme x Undercover by Jun Takahashi. Supreme x Comme des Garçons. But nothing has been on the scale of Louis Vuitton. It’s clearly a flash point in the history of a brand associated with authenticity and rebellion — collaborating with, perhaps, the ultimate symbol of the men’s luxury establishment. Guy Trebay called it James Jebbia’s sellout moment. Vogue.com lamented that pieces in the collection were so expensive that Supreme had lost its gritty, of-the-people allure (debatable considering that most people wearing Supreme likely bought it at a huge markup from the resale market, where a $40 T-shirt can go for $100 to $1,000). These arguments, however, misunderstand Supreme’s appeal, especially for those who buy, wear, and collect it. They’re not here because the brand is affordable. To them, Supreme is hip-hop. The irony, of course, is that Louis Vuitton is now often associated with hip-hop stars, too. Nearly two decades before Kanye declared himself the Louis Vuitton don, Sir Mix-a-Lot was calling out fakes with “Swap Meet Louie.” So, it seems, high came to low and vice versa.

“It’s the subversiveness of it,” says Spade. “That’s what the LV thing is. It’s that big corporate thing you’d never suspect. It’s like when Bob Dylan played electric guitar and everyone freaked out. That’s what you want from Supreme. Next thing you know, they’ll collaborate with GE — every time I think I’ve figured them out, they veer left.” Surprise, it turns out, is the ultimate luxury.

The Supreme and Vuitton Collab Was the Most Brilliant Troll

collaboration station 12:47 p.m.
Welcome to the Inside of Ye’s Mind. He’s Making ‘No Apologies.’ Here’s a look inside Yeezy x Gap’s Times Square takeover.
marriage 12:41 p.m.
The World Will Soon Have Two Taylor Lautners The Twilight star says his fiancée, also named Taylor, will take his last name.
life after roe 12:39 p.m.
What Abortion Actually Looks Like Two doulas set out to demystify the process by documenting their clients’ experiences.
By Megan Paetzhold
celebrity weddings 11:20 a.m.
Bennifer Is Getting Married (Again) The follow-up party to their small Vegas wedding is happening this weekend in Georgia.
celebrity 11:03 a.m.
Amy Schumer’s Mental-Health Parody Did Not Go Over Well She has since clarified that she did not intend to mock Tom Holland.
the internet 11:00 a.m.
The Beginning of the End of Millennial Discourse No one is talking about what they think they’re talking about.
By Michelle Santiago Cortés
divorce 10:50 a.m.
Alexis Bledel and Vincent Kartheiser Are Getting Divorced The couple met on the Mad Men set in 2012.
fashion friend 10:00 a.m.
Hey Fashion Friend: I Want to Shop Sustainably and Affordably Here’s how to spend less while shopping sustainably; brands include Everlane, Lacausa, Girlfriend Collective, and more.
sustainability 8:00 a.m.
Nadya Okamoto Wants to Talk About Periods The 24-year-old founder of sustainable period-care brand August breaks down the stigma about periods and the importance of sustainability.
mental health Yesterday at 7:49 p.m.
Jonah Hill Takes a Break From Press Tours Due to Anxiety He directed and starred in an upcoming documentary, Stutz.
lawsuits Yesterday at 5:24 p.m.
Unpacking Angelina Jolie’s Lawsuit Against the FBI Jolie is suing the agency for allegedly withholding records from its 2016 investigation into Brad Pitt.
hot goss Yesterday at 4:53 p.m.
Rachel Bilson Misses What About Bill Hader? At least she’s honest.
polio Yesterday at 4:49 p.m.
Here’s What We Know About Polio in New York Experts say this could mean hundreds of cases circulating, but the risk to vaccinated people remains low.
By Katie Heaney
celebrity Yesterday at 4:25 p.m.
How Many Tattoos for Your Wife Is Too Many? Brooklyn Peltz Beckham is trying his hardest to find out.
santa can you hear me? Yesterday at 3:01 p.m.
Mariah Carey Is Feuding With Her Fellow Christmas Queens They have not taken kindly to her attempt to trademark “Queen of Christmas.”
shopping Yesterday at 1:55 p.m.
25 Sweatpants If You’re Not A Fan of Hard Pants Long live elastic waistbands.
in her shoes podcast Yesterday at 1:01 p.m.
Put Tamera Mowry-Housley in All the Hallmark Christmas Movies  The actress and host joins this week’s episode of In Her Shoes.
By the Cut
your next move Yesterday at 12:44 p.m.
‘I’m Homesick. How Do I Convince My Boss to Let Me Move to Another City?’ If you truly want to keep this job, you need to determine what may make your boss nervous about you working remotely and address those concerns.
where did you get that? Yesterday at 12:27 p.m.
Michelle Li’s Faves Include a Chopova Lowena Skirt and a Loewe Flamenco Bag The stylist shared with us her strategic approach to dressing.
hair Yesterday at 12:10 p.m.
Behold, America’s Finest Mullets The kids’ division of the USA Mullet Championships is your fall hair inspo.
More Stories