It’s hard to choose which part of HBO’s The Young Pope I dislike most, so in a column called Young Nope, I share the worst thing from that week’s episode.

There is a well-known and much beloved song by the apparently still active disco-rock band the Killers that goes like this:

It’s never been quite clear to me why the lyrics aren’t “Are we human or are we dancers?”, but then again most mysteries are better left unsolved. Anyway, that’s not the point.

In the last, the final, the ultimo episode of HBO’s Pope Show, Pius gives a homily in Venice, his spiritual home. It goes a little something like this:

Are we tired or are we vigorous?
Are we healthy or are we sick?
Are we good or are we bad?
Do we still have time or has it run out?
Are we young or are we old?
Are we human or are we dancer?

Okay he doesn’t say the last line but what a homily it was — a homily clearly inspired by the late-’00s rock-disco band the Killers, whose lead singer is a famous Mormon. In European-history class in high school, I believe I started an essay in a similar fashion. “Are we good or are we bad? That is the question many people asked during World War II.”

The entire world is phenomenally moved by Pius’s speech; we see them all glued to their televisions in one long final scene, which will seem familiar to you if you’ve ever watched any blockbuster movie about aliens. I half expected Billy Bob Thornton to appear at the pulpit to announce, solemnly, that aliens had breached Earth. Had I performed my high-school essay on WWII with the same solemnity as Pius, instead of getting a bad grade, might I have become pope, too? Hm.

Poorly written and juvenile homilies and essays aside, I felt a distinct sense of loss when the episode ended (Pius faints, sees God, then … we zoom out above Earth … for some reason …). While writing is clearly not Lenny’s strong suit, cutting insults are — and it pains me to think of how I will miss enjoying them like a fresh hot bag of zeppole every week, licking the powdered sugar from every finger after devouring each one. The show’s producers have claimed that they are developing a second season, but we’ve been waiting a hell of long time for the second coming of the Lord — and well, don’t hold your breath.

But in times of darkness and sorrow, the lord implores you to be patient, and ask yourself only this: Are we human … or are we dancer? 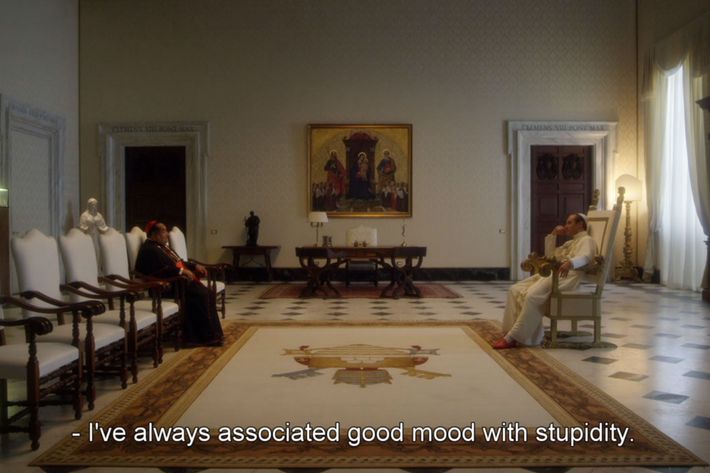 Until next season (?), this has been Young Nope.

See All
gone sale-ing Nov. 27, 2020
Shop the Best Black Friday 2020 Deals at Nordstrom Indulgent skincare, cozy sweats, and plenty of designer finds.
By the Cut
black friday 2020 Nov. 27, 2020
Everything Worth Buying at Sephora’s Holiday Sale Including lots of Strategist favorites.
black friday 2020 Nov. 27, 2020
All the Best Deals at Everlane’s Black Friday Sale Lots of Strategist-approved clothes and accessories up to 40 percent off.
hot bod Nov. 27, 2020
This is the Perfect Time to Learn How to Dance This app taught me how to do a routine in heels.
acquiescence Nov. 27, 2020
Turns Out It’s Pretty Good: The Sopranos I had my reasons for not watching it!
By Marianne Eloise
gone sale-ing Nov. 27, 2020
Shop the Best Black Friday 2020 Deals on Amazon Markdowns on everything from skincare to jeans to kitchen appliances.
By the Cut
gone sale-ing Nov. 27, 2020
All the Best Black Friday Sales A massive, comprehensive list.
By the Cut
glossy glossier glossiest Nov. 27, 2020
Everything at Glossier Is On Sale Right Now Happy Black Friday.
By the Cut
my two cents Nov. 26, 2020
‘Many of These Women Don’t Even Know They’re Being Abused’ Economic abuse was insidious before the pandemic, but COVID has made it worse.
By Charlotte Cowles
they seem cool Nov. 26, 2020
The Artist Exploring the Layers of the Black Body Meet Devin B. Johnson.
By Devine Blacksher
acquiescence Nov. 26, 2020
Turns Out It’s Pretty Good: Aging I’m talking about joy, about having more life to live.
By Xochitl Gonzalez
coronavirus Nov. 25, 2020
Denmark’s Slaughtered Mink Are Reportedly Rising From Their Graves Weeks after the country began culling the animals over coronavirus concerns, their decomposing bodies are resurfacing.
hotshot Nov. 25, 2020
Haggard Tree Undergoes Stunning Glow-Up The Rockefeller Center Christmas tree got extensions.
holiday gifts Nov. 25, 2020
The 24 Best Gifts for the Foodie in Your Life Whether they’re into wine, coffee, or Sichaun spices.
By the Cut
a christmas miracle Nov. 25, 2020
Well, at Least There’s No SantaCon This Year Or, no official SantaCon, that is.
gift guides Nov. 25, 2020
The 11 Best Books to Give As Gifts Titles to satisfy everyone on your list, from fantasy obsessives to die-hard New Yorkers.
the object of our affection Nov. 25, 2020
One-of-a-Kind Jewelry Inspired By ’70s Glassware Brooke Callahan creates whimsical creations out of vintage and Italian glass.
social media Nov. 25, 2020
The Happiest Man on Twitter Chatting with Gerald Stratford, the British retiree who’s become famous for his big veg.
tastemakers Nov. 25, 2020
The Florist Using Bouquets for Good Kaylyn Hewitt’s new collaboration benefits Campaign Zero, which fights police brutality.
health Nov. 25, 2020
So When Exactly Will a COVID Vaccine Be Ready? Everything you need to know about the most promising candidates, how they’ll be distributed, and what happens after.
More Stories