The genius of showing in a gloomy, abandoned theater was not matched by the clothes. 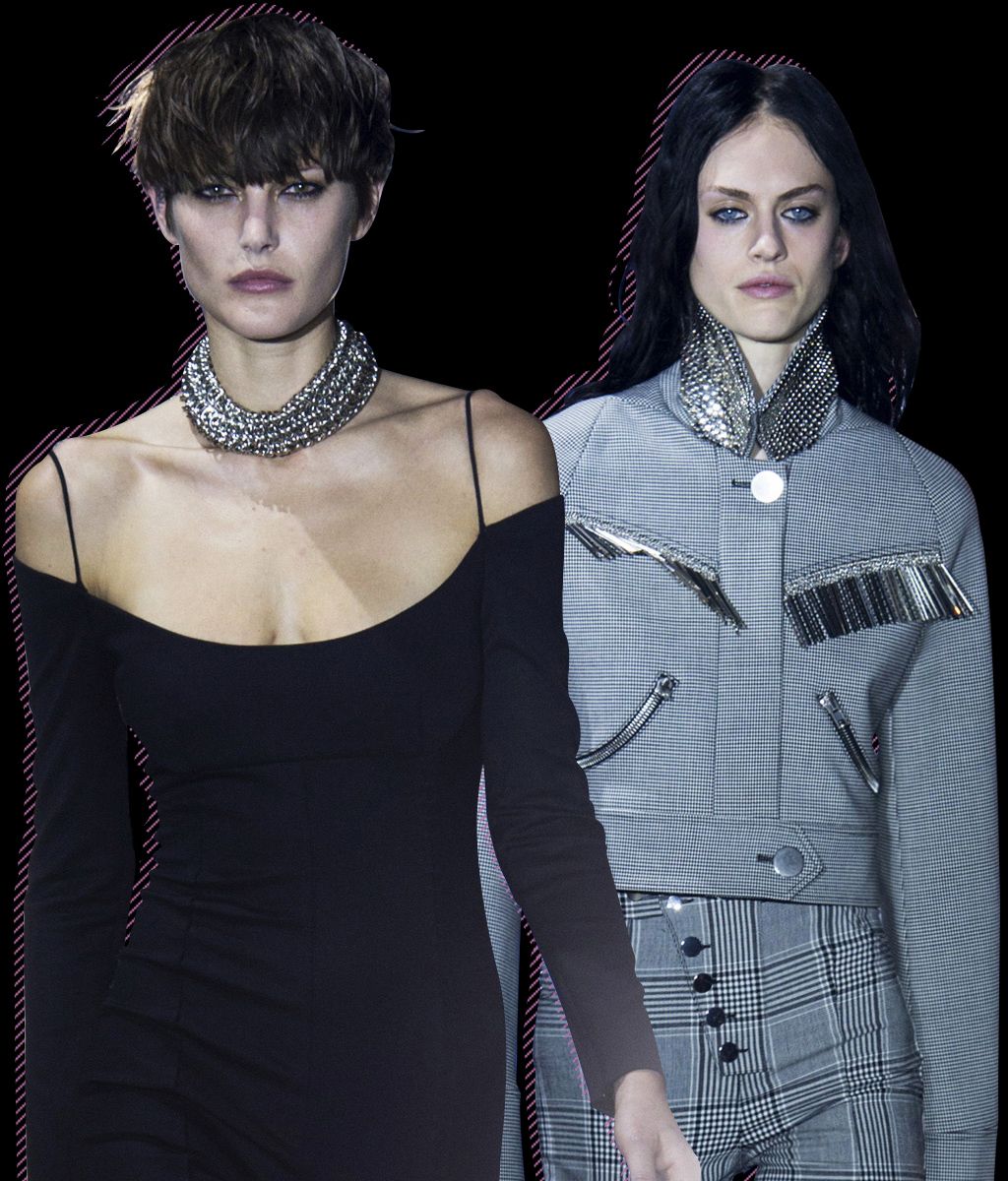 Borne uptown on Saturday night by the Broadway local, I got out at 145th Street and entered, a block away, a gutted building whose insides had been wrapped like a cadaver in black plastic.

On a more promising note, beer kegs lay in stacks. Someone offered me a beer and I took it. I followed this person through a dark maze of plastic and kegs as she explained that her boss, Alexander Wang, had punched through a wall to reach the adjoining theater, the old RKO Hamilton, where Wang would present his fall collection.

“It really feels like Berlin,” she said, with excitement, of the space.

Doesn’t everything these days, I thought.

Still, the theater was absolutely resplendent in its gloom. Wang had set up a triangular runway in what presumably had been the first rows, or perhaps the orchestra pit, of the Hamilton. Fashion kids and editors ringed the stage. A DJ was at work. Above us stretched a dome furred in crumbling gypsum. It took little to imagine the balconies and boxes filled with New Yorkers in wing-collared shirts and huge feathered hats. It was the vaudeville age when the Hamilton opened in 1913, and of course the Kaiser in Berlin was about to go to war.

Meanwhile, back at the Wang show, the mood was sinking as fast as the Titanic. The models strutted out in black wool coats and black stretch pants, followed by black catsuits and slinky tops and minis drizzled with silver trim or sliced with black net. This was more like Bebe, the mall chain, than the Wang-gang coolness he had delivered last season. It was also surprising, given that Wang is now concentrating his effort on his own brand and no longer dividing it with Balenciaga. Apart from the genius venue, it was hard to see where that effort had gone.

I felt more big-city inspiration in the clothes of Shane Gabier and Chris Peters of Creatures of the Wind, who also showed on Saturday. A number of pieces, especially stiff little jackets and reversed fur coats (with the hide side adorned almost DIY style with crystals), looked vintage, but it was the offhand pairing of styles — a drably tan poplin coat, say, with checked trousers and a plain white shirt — that gave the results a modest harmony. Another nice touch were the vinyl knee-high socks with matching pumps. They suggested sleek boots, but they also suggested something makeshift. We’ve seen similar ideas from other designers, but this time I could imagine Peters and Gabier sketching them against the background of New York, based on a woman they knew or a stranger they saw only for a moment.

Ryan Roche had a lovely show — her first on a catwalk. Movement brought out the lines and richness of her fairly simple clothes, most in knit. The standout look was a below-the-knee knit dress in warm cherry with slightly padded shoulders and puffed sleeves gathered at the wrists. Unlike many of her knit dresses, this one actually had a waist. It was gorgeous. On the demerit side, one or two of Roche’s suede looks, in particular a jacket with soupy trousers, needed more finishing.

Finally, a shout-out to Alejandra Alonso Rojas, a relatively new designer. She, too, had some lovely knits, mostly in crochet, but I was really struck by her idiosyncratic, very feminine sense of proportion, especially for coats: A rare thing.

See All
covid-19 Yesterday at 7:04 p.m.
Johnson & Johnson COVID Vaccine Deemed Safe and Effective Analysis by the FDA shows a third vaccine option offers strong protection against severe and fatal coronavirus infections.
tastemakers Yesterday at 6:49 p.m.
The Shoe Designer Who Loves a Chunky Heel Chelsea Paris’s Theresa Ebagua makes bold shoes inspired by her Nigerian heritage.
collaboration station Yesterday at 6:09 p.m.
New York Forever, Baby Proceeds from this Alex Mill slogan tee support city restaurant workers.
new faces of things Yesterday at 5:26 p.m.
This Lawyer-Turned-Model Is Now a L’Oréal Spokesperson Nidhi Sunil’s face has a new job.
power Yesterday at 2:57 p.m.
Former Aide Says Andrew Cuomo Sexually Harassed and Kissed Her In a Medium essay, Lindsay Boylan wrote that Cuomo created a work culture where harassment “is not only condoned but expected.”
power Yesterday at 2:37 p.m.
Working Two Jobs, and Barely Surviving The abject inhumanity of America’s minimum wage, as told by one home health aide.
By Bridget Read
power Yesterday at 12:42 p.m.
School Expels Kids Because of Their Mom’s OnlyFans Account A Sacramento mom said she and her family were subjected to harassment and abuse after the school community discovered her page.
power Yesterday at 11:43 a.m.
Ahmaud Arbery’s Mother Is Suing the Three Men Who Killed Her Son In a federal lawsuit, Wanda Cooper-Jones also accuses police and prosecutors of trying to “cover up” Arbery’s murder.
the cut podcast Yesterday at 11:11 a.m.
Introducing Chicano Squad With Cristela Alonzo On this week’s episode, the drawbacks of being “the first.”
By the Cut
covid-19 Yesterday at 9:30 a.m.
All My Friends’ Quarantine Bubbles Are Bursting Suddenly, everyone I know is abandoning their pod.
By Maggie Lange
crime Feb. 23, 2021
What We Know About the Death of Daniel Prude A grand jury has declined to indict any of the Rochester police officers involved in the fatal arrest.
the object of our affection Feb. 23, 2021
Why Not Wear a Scarf As a Dress? Another case for post-pandemic dressing.
nyfw fall 2021 Feb. 23, 2021
Your Favorite TV Shows in an Alternate Universe Coach reimagines iconic entertainment for fall 2021.
skin deep Feb. 23, 2021
Deciem Is Now a Billion-Dollar Company Thanks to Estée Lauder.
fashion films Feb. 23, 2021
Watch a Fashion Film That Explores Unrequited Love The latest installment in Miu Miu’s short-film series.
power Feb. 23, 2021
Gérard Depardieu Charged With Rape and Sexual Assault He allegedly assaulted a 22-year-old actress while helping her rehearse in 2018.
politics Feb. 23, 2021
Heidi Cruz Is ‘Pretty Pissed’ Someone Leaked Her Cancún Texts But honestly, what was she expecting?
saweetie Feb. 23, 2021
Saweetie on Wigs, the Early ’00s, and Personal Style Talking through the looks behind “Best Friend.”
why is your skin so good Feb. 23, 2021
How This Boutique Owner Gets Her Skin So Good Including the $5 cream that helped with her stretch marks.
bachelor nation Feb. 23, 2021
Matt James Opens Up About Bachelor Racism Controversies “It has been devastating and heartbreaking, to put it bluntly.”
More Stories