Wendy Morgan, photographed by her daughter in 1994.

A series investigating the effects of gravity on the female form.

Sixty-two-year-old photographer Sage Sohier is the daughter of Wendy Morgan, a model who posed for Richard Avedon and Irving Penn in the 1940s. She says she has been enamored with her mother’s sense of glamour since childhood, when she’d lie on her bed and watch Morgan try on different outfits. For her new book Witness to Beauty, out later this month, Sohier photographed Morgan aging throughout her 70s, aiming to capture her mother’s desire to remain beautiful.

“We don’t live in a society that appreciates women looking their age. My mother, unlike many women, has been able to afford cosmetic surgery, and she has enjoyed looking as youthful as she can,” Sohier told the Cut. “Though some would say that that is not a ‘graceful’ way to age, in many important ways she has been a terrific example of how to enjoy growing older.” In the portraits, we see Morgan swimming nude, lounging in bathtubs, and applying makeup at her vanity. She grapples with her age, too — in photos taken during her spa treatments and acupuncture appointments. In other images she leans over a man’s deathbed, or stands solemnly in Arlington National Cemetery.

“Despite my mother’s ability to stay looking younger than she is, I tried to make it clear in the pictures that aging entails losing loved ones through death or divorce, as well as constant insults and challenges to the body,” Sohier said. “Even though relationships end and partners die, and body parts fail, she always keeps moving ahead. Resilience, persistence, and the ability to find pleasure in life are essential.”

Click ahead to preview the book, published February 21 by Kehrer Verlag.

In a cedar enzyme bath at the Osmosis Spa, Freestone, California, 2010.

Dolphin-watching at sunrise on an eco-cruise, Baja California, 2007. 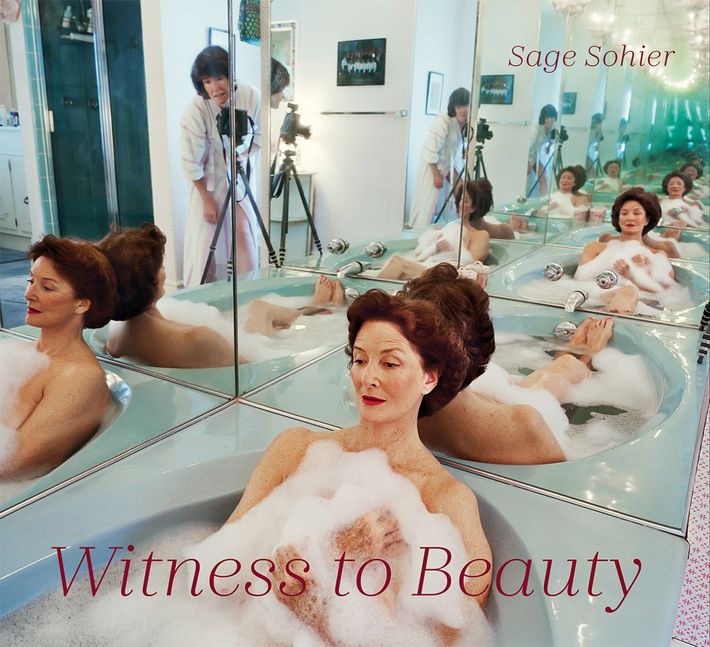 book review 3:52 p.m.
Jamie Lynn Spears’s Book Is a Sad, Unsettling Read Despite writing extensively about Britney, she never pauses to consider what her life has actually been like.
power 1:20 p.m.
A Woman Says She Was Groped While Napping on a Plane She says she woke up to another passenger touching her breast mid-flight.
friday sales 12:32 p.m.
22 Things on Sale You’ll Actually Want to Buy: From Samsonite to Studs Including our favorite lounge shorts for men and the Shiatsu massager that’s “better than my boyfriend.”
we tried this 12:29 p.m.
Sorry, But I Tried the Bologna Face Mask Feast your eyes upon my meat!
self 12:00 p.m.
The Couples Code Is sharing phone passwords a sign of a healthy relationship? But what if you really, really don’t want to?
celebrity 11:59 a.m.
Have Anna Kendrick and Bill Hader Been Secretly Dating? We may have a new unexpected couple on our hands.
abortion 9:37 a.m.
What’s Next for the Extreme Texas Abortion Ban? The Supreme Court is now walking back on its own ruling, allowing S.B. 8 to stand and rejecting providers’ petitions.
fashion 8:00 a.m.
My Time With André Knowledge, coupled with his wit and amazing sense of game, should be André Leon Talley’s lasting legacy.
self 8:00 a.m.
Will We Ever Escape ‘Before’ and ‘After’ Photos? I’m already preparing myself for the deluge of January “weight-loss transformations” on Instagram.
By Alex McElroy
sorry to this man Yesterday at 9:13 p.m.
That Time Martha Stewart Refused to Date a (Fictional) Cannibal Martha Stewart once dated Anthony Hopkins, but it didn’t last long.
fashion Yesterday at 6:12 p.m.
Virgil Abloh’s Last Show Louis Vuitton memorialized the late designer for fall/winter 2022.
very online Yesterday at 4:59 p.m.
Here’s What a Metaverse Rave Is Like, I Guess In fairness, I couldn’t figure out how to make my avatar dance either.
no! Yesterday at 4:33 p.m.
Let the M&M’s Be Hot and Mean A rude corporate rebrand has decided the M&M’s characters should be … progressive?
celebrity Yesterday at 3:47 p.m.
Tracing the Ongoing Feud Between Britney and Jamie Lynn Spears Jamie Lynn released private text messages she says she sent Britney in 2020 about the conservatorship.
enough Yesterday at 12:46 p.m.
What Else Can We Put in Space? Apparently, someone is building a movie studio and sports arena out there.
power Yesterday at 12:00 p.m.
Working Through the End Days of Roe The staff at the Jackson Women’s Health Organization is too busy to dread what’s very likely to come.
science Yesterday at 11:22 a.m.
Give Me the Goth Space Diamond Sotheby’s is expected to sell the 555.55-carat black diamond for at least $6.8 million.
my two cents Yesterday at 8:00 a.m.
‘I Was Harassed at Work. Can I Afford to Sue?’ Taking legal action might be more feasible than you think.
By Charlotte Cowles
recap Yesterday at 8:00 a.m.
And Just Like That … Miranda Blows Up Her Life, Again At least Harry doesn’t have penis cancer.
first person Yesterday at 7:00 a.m.
The First Time Was Terrifying. Now, It’s Just Excruciating. My family’s second bout with COVID might be worse.
By Reyhan Harmanci
More Stories