As a child, the Japanese artist Yayoi Kusama was fascinated by white stones that dotted the riverbed behind her family’s house. Later, as an artist, she envisioned a world obliterated by dots, channeling her hallucinations into drawings of flowers and abstract, swirling patterns. For the new roving exhibit “Yayoi Kusama: Infinity Mirrors,” opening February 23 in Washington D.C., Kusama took her signature dot motif to the furthest extent possible — infinity.

At the Hirshhorn Museum, visitors will experience Kusama’s version of infinity in six mirrored installation rooms illuminated by LED lights — infinity rooms that expand a viewer’s sense of time and space and suggest a cosmic hyperreality. Kusama has said she’s interested in the concept of “self-obliteration,” seeing her kaleidoscopic installations as connecting her viewers so completely to their surrounding environment that their sense of self is lost. Other visitors may see their reflections repeated infinitely in the exhibit’s mirrors and consider themselves separate from the set — a sea of polka-dotted props and phallic floor pillows.

The accompanying book Infinity Mirrors, published February 1 by Prestel, traces the artist’s colorful, decades-long career from evocative pastel drawings to cheerful paintings and bespeckled sculptures. Referring to the Phalli’s Field installation shown in the slideshow ahead, she tells Hirshhorn Museum director Melissa Chiu: “I wanted to show that I am one of the elements — one of the dots among the millions of dots in the universe.”

In a previous interview that appears in the book, Kusama explains how World War II cast a shadow over her childhood in Japan and influenced how she came to value personal and creative freedom. At age 13, she was sent to work in a military factory to sew parachutes for the Japanese army. “American B29’s [flew] in broad daylight,” she recalls. “The air-raid alert went off every day, so that I could barely feel my life. My adolescence was spent in the closed darkness; especially because of the war, many dreams I had rarely, if at all, saw the light of day.”

In 1957, at the age of 28, Kusama emigrated to the U.S. — first to Seattle, then to New York City. “For art like mine — art that does battle at the boundary between life and death, questioning what we are and what it means to live and die — [Japan] was too small, too servile, too feudalistic, and too scornful of women,” she once explained. “My art needed a more unlimited freedom, and a wider world.” Action paintings charged with masculine aggression were popular in downtown New York’s art scene at the time. In contrast, Kusama’s work was intricately detailed and required a significant amount of studio time, prompting some critics to relate her practice to women’s domestic work. She described her artwork during this period as inwardly focused: “I think only of myself when I make my artwork.”

Kusama later moved back to Japan and checked into a mental hospital for psychosis; there, she continued to paint and write surrealist stories and poems. In 1993 she became the first solo artist to represent Japan at the Venice Biennale, solidifying her prominence on the international museum circuit. Kusama rarely makes public appearances but when she does she dresses boldly — in floor-length polka-dot dresses, neon-colored wigs, and mismatched socks that mirror her artwork.

Click ahead to preview photos from the book, including one recent photo of the artist in her studio wearing her signature red anime wig.

“Yayoi Kusama: Infinity Mirrors” will be on view at the Hirshhorn Museum from February 23 to May 14. 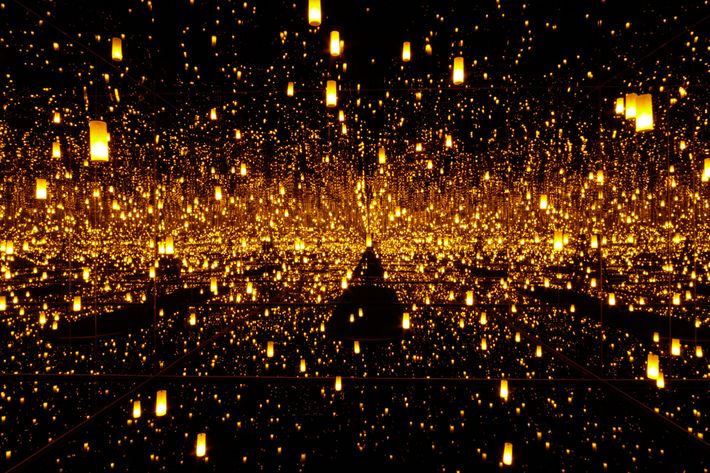 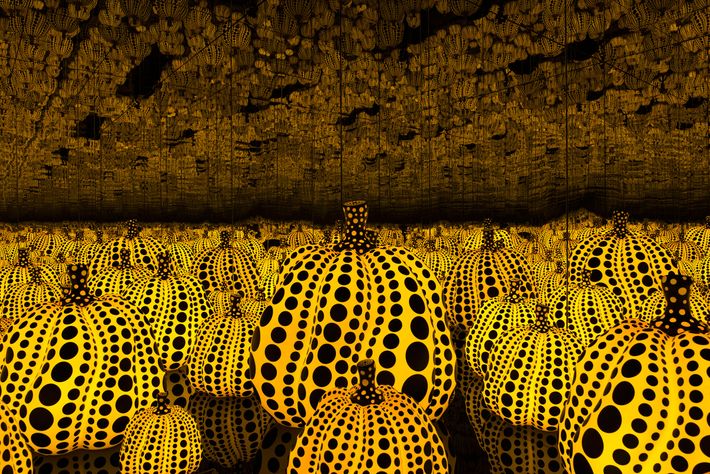 All the Eternal Love I Have for the Pumpkins, 2016, Yayoi Kusama. Wood, mirror, plastic, black glass, LED. Collection of the artist. 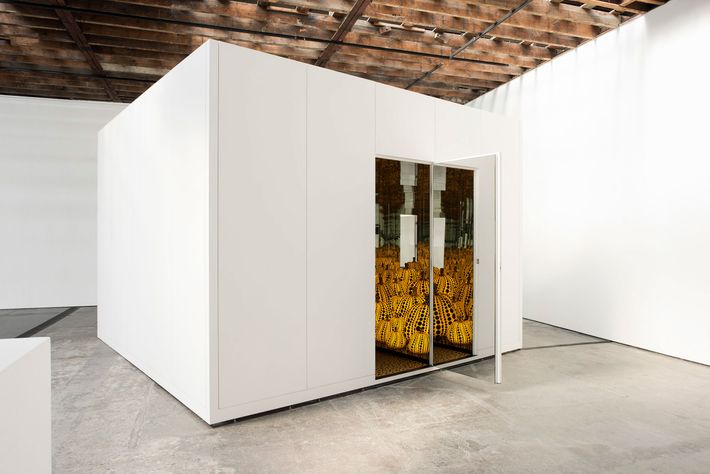 All the Eternal Love I Have for the Pumpkins, 2016. Yayoi Kusama. Wood, mirror, plastic, black glass, LED 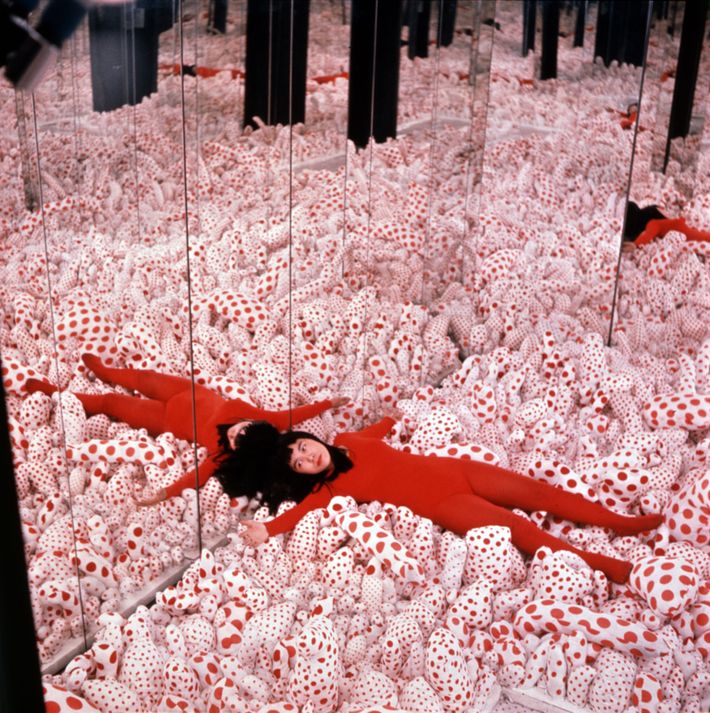 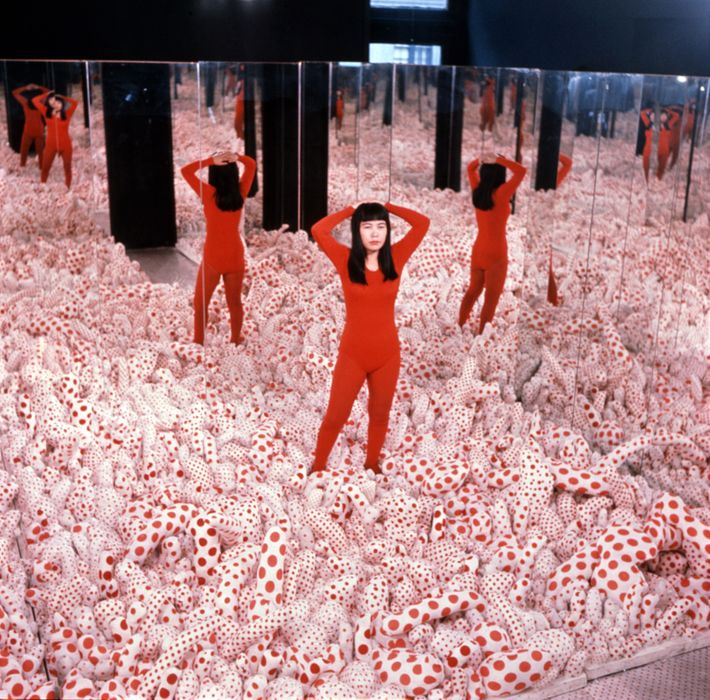 celebrity 2 mins ago
Hayden Panettiere Calls Giving Up Custody of Her Daughter ‘Heartbreaking’ “It was the worst, signing those papers.”
obsessive tester 4:00 p.m.
21 Hand Creams You Probably Need Right Now Because you’ve been washing them incessantly.
By The Cut
transgender rights 3:32 p.m.
Virginia Students Walk Out in Protest of Anti-Trans Policies Students at over 90 public schools are protesting the governor’s proposal to roll back transgender rights.
celebrity 2:13 p.m.
Elizabeth Chambers Allegedly Tried to Expose Armie Hammer in the Press A friend says Hammer’s estranged wife used her email to leak rumors about him to the press.
power 12:35 p.m.
Women Across Iran Are Protesting the Morality Police Following the death of Mahsa Amini in police custody, women are burning their hijabs and cutting their hair in the streets.
holiday gifts 12:15 p.m.
46 Christmas Gifts for Any Kind of Mom Whether she’s into cooking, skin care, gardening, or relaxing.
By the Cut
gender reveals 11:01 a.m.
Another Gender Reveal Ends in Environmental Disaster A couple in Brazil may have contaminated one town’s water source by dyeing a 60-foot waterfall blue.
gone sale-ing 10:02 a.m.
Saks’ Friends and Family Sale Will Make You Look Forward to Winter Puffer coats, boots, and knitwear, all on sale.
cut chat 10:00 a.m.
Every Thought We Had Watching Don’t Worry Darling For starters, it was definitely a movie.
how i get it done 10:00 a.m.
How Manicurist Jin Soon Choi Gets It Done During Fashion Week “If one hour before the show we still have models to do, my heart starts pounding. I want everything done without any delay or drama.”
By Danya Issawi
dream date 9:00 a.m.
A Hot Time With Harris Dickinson The Triangle of Sadness star reimagines what it means to be a modern man between sauna steams.
By Hanna Hanra
encounter 8:00 a.m.
17 Seconds With a Spotted Lanternfly Face-to-face with the stylish invasive species. So do I smoosh it or not?
By Matthew Schneier
at home in asian america 8:00 a.m.
For Domestic Workers, the Asian Class Divide Begins at Home Five nannies from the Philippines, Nepal, and China open up about what it’s like to work for their Asian American employers.
By Arya Sundaram
ambition 7:00 a.m.
Even Kelly Ripa Has to Deal With Sexist Bulls- - - at Work As the Live! host writes in her new collection of essays, seniority is a “masculine word.”
crime Yesterday at 5:19 p.m.
A Train Hit a Police Car With a Woman Handcuffed Inside She survived, though her attorney wonders why Colorado officers left their SUV parked directly on the tracks.
mfw spring 2023 Yesterday at 5:19 p.m.
The Best Street Style at Milan Fashion Week Chic looks from this fashionable city.
royals Yesterday at 4:43 p.m.
The Palace Is Reportedly Panicking About The Crown Again Royals are concerned the upcoming season will damage King Charles’s reputation.
all in the family Yesterday at 3:33 p.m.
Untangling the Secrets of a Teenage Mother We think of our parents as known quantities. But as Salon editor-in-chief Erin Keane writes in her memoir, Runaway, we rarely know the whole story.
mental health Yesterday at 3:15 p.m.
Megan Thee Stallion Wants to Help Hotties Get Therapy “Bad Bitches have bad days too.”
culture Yesterday at 11:57 a.m.
Why Is Hollywood Still So Obsessed With The Stepford Wives? Don’t Worry Darling wears its references to the cult classic on its sleeve.
More Stories