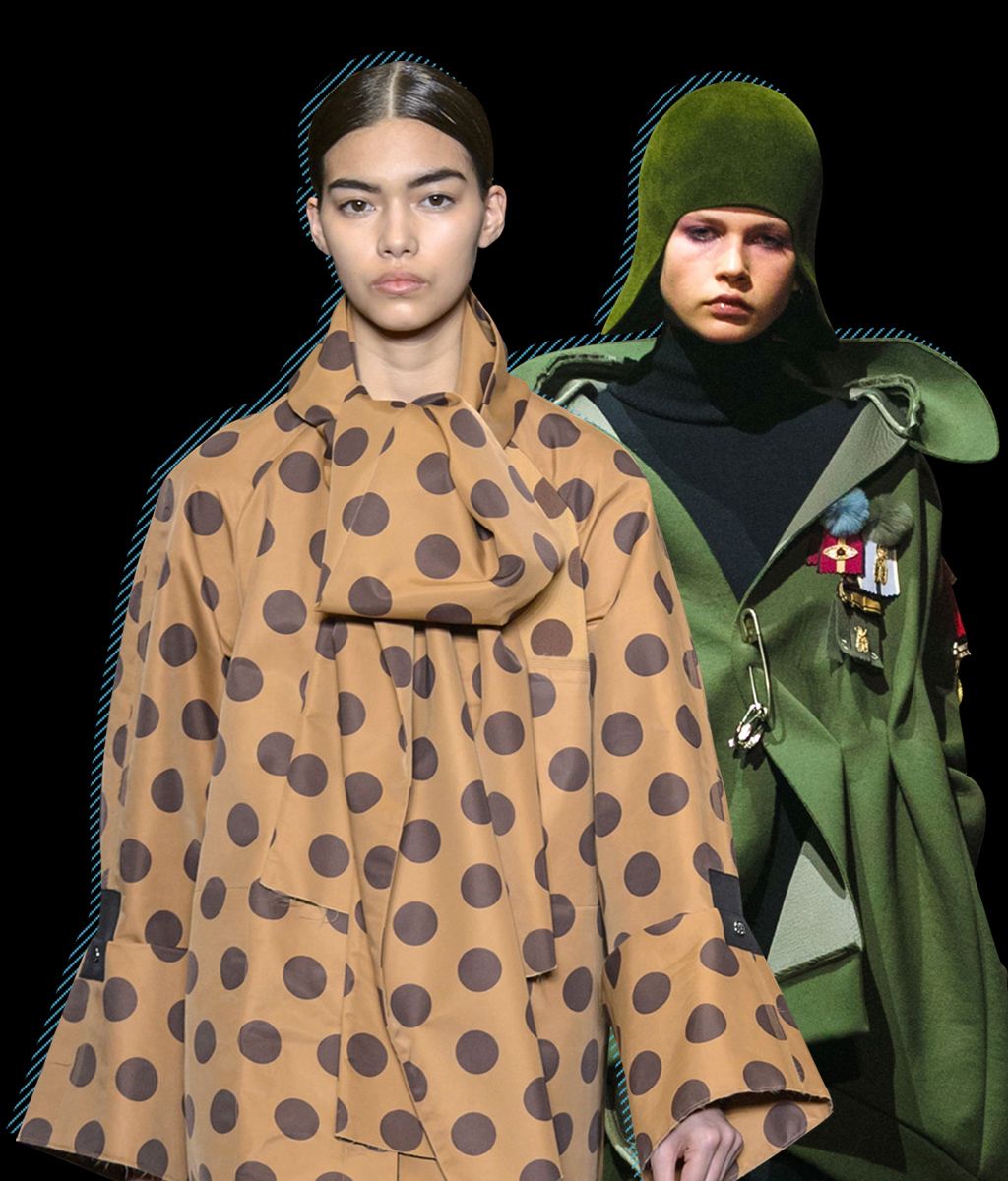 I love a show where the allusions are clear and the clothes interesting regardless. Such was the case yesterday at Loewe and Undercover, a rare double whammy in Paris.

Jonathan Anderson got things started at Loewe, but let’s skip over the fact that he made the room — at Unesco headquarters — scarily dark. You could hear editors squawking like old girls as they fumbled for their seats, me included. I merely assumed that the young Anderson was playing mad botanist (there were dozens of potted orchids set about) or mad movie director, and all would be revealed — with someone’s pen in my eye.

But then the first model out wore a short smock dress in a black-and-brown silk plaid banded in black leather, with a floppy canvas garden hat that nonsensically featured a loaf of “Loewe” bread drawn on the crown. I was hooked. Next came a loose polka-dot coat dress in ottoman silk with a matching neck scarf and a kitty-shaped purse, then an orange-and-black checked jacket with black coque feathers escaping the cuffs and a sensible, tourist-type denim skirt. The real clincher, though, was a green-and-white striped cardigan over a loose olive-and-coral plaid silk dress. The muses perched on Anderson’s weird branch seemed to be Norma Desmond and Bunny Mellon, the late art patron and gardening expert, who bought her clothes from Balenciaga and later Givenchy, and who had wonderful taste in furniture and modern art. 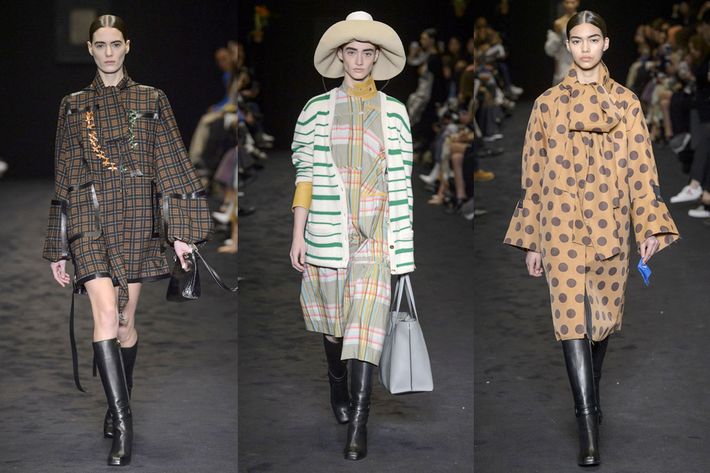 Michel Gaubert, the musical director, is partially to blame for my Norma-Bunny reverie, because the music for a delicious chunk of the show was from Franz Waxman’s score for A Place in the Sun, the film where Montgomery Clift lets Shelley Winters slide into the drink so he can be with the more glamorous Elizabeth Taylor. The opening portion was from Sunset Boulevard, the stage version.

However, Anderson is his own man. These clothes were individualistic and odd in the best contemporary sense, matched by compelling accessories, like the canvas gardening hat. Anderson began his career, in London, with a quirky outsider’s eye that definitely had a theatrical bent (he’s a former actor). But in the last two years, with Loewe’s resources, he’s really developed that sensibility. His clothes are beamed at someone with very sophisticated taste — a woman, in fact, like Mellon — and twisted with irony. It’s a believable balance. Also, although Anderson showed too many dresses, and conspicuously few coats, he is fantastic at designing dresses. Wouldn’t he be interesting at Dior?

Jun Takahashi, the genius behind the Tokyo-based label Undercover, should be better known than he is. This was an ambitious and original show, held in the mid-19th-century ballroom Salle Wagram, using the imagery of bees both as a metaphor for a power structure and for some of the more fantastical shapes, like puffy, wing-shaped wraps and the elaborately pleated red gown — more like a Mardi Gras float — worn at the end by the queen. 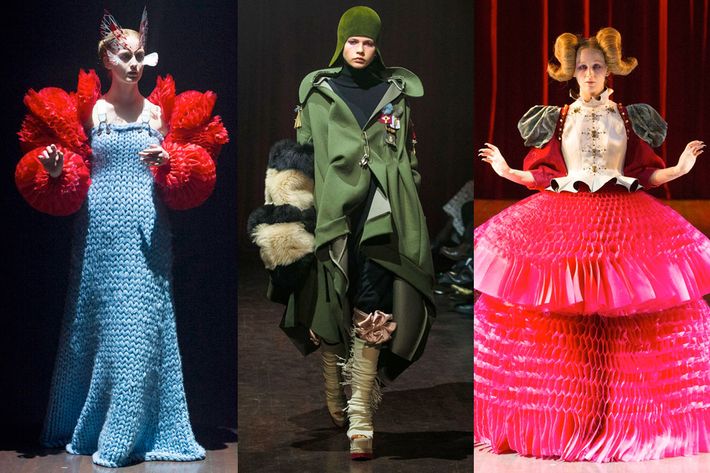 Because the show was organized in distinct segments, with the stage curtain parting and another group of models emerging to stand in an array of spotlights, it also felt that Takahashi was assembling various tribes. Here was a group in felt cloche helmets wearing asymmetrically draped coats with very cool white platform boots with pony fringe up the back seam; here a group in delicate, regally colored knits with ruffs, their faces veiled in net; and then a tougher bunch with spiked hair and leather belts jangling with skeleton keys, horse bits, and small obsolete tools.

The historical references were apparent — in the modified Elizabethan ruffs, the ceremonial headgear, the old tools — but they were artfully blended into the whole. Maybe Takahashi did a marathon session of Game of Thrones over the holidays and got inspired. Who knows, but the amazing thing was how he refreshed so many 21st-century basics, notably sweatshirts. In washed-out brights, and shown with long cotton-fleece skirts, they were partially destroyed and scattered with tiny metal ornaments. 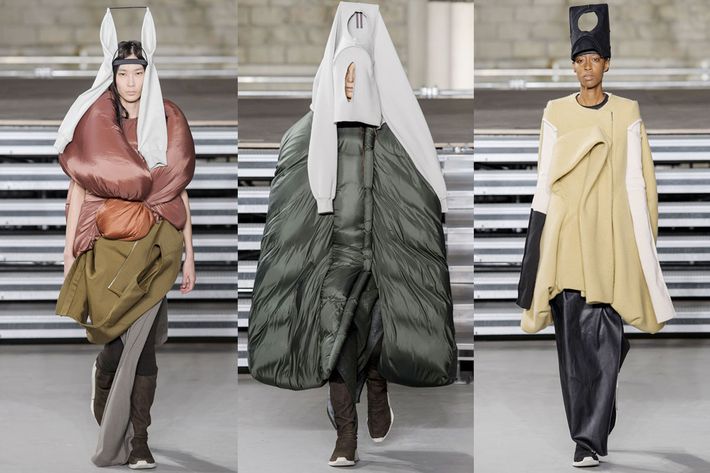 Rick Owens was also thinking of ceremony for his collection, specifically the metal-frame headpieces covered in shirt sleeves and other shapes. After several seasons of almost-ethereal clothes balanced by urban sportiness, it’s understandable that Owens wanted to bring more sculpture to his shapes. However, the effect didn’t transport. The tall headpieces looked jarring. The bundled shapes of the clothes didn’t really advance that type of abstract construction, most associated with Rei Kawakubo, and there wasn’t that sense, so plain at Undercover, of an idea fully mastered.

a royal embarrassment 7:06 p.m.
Prince William’s Cringe Moments Are Different From Ours Watch Prince William sing “Livin’ on a Prayer” with Taylor Swift and Jon Bon Jovi.
grief 6:00 p.m.
Nick Cannon’s Youngest Son Dies From Cancer Zen Scott Cannon was five months old.
catching up 5:22 p.m.
So … What Happened on Sex and the City Again? A cheat sheet to where we left off and where And Just Like That … picks up.
5 questions with... 4:39 p.m.
Chatting With WNBA Player Dearica Hamby, the New Face of Jordan On why she sometimes needs to just go into a room by herself and close the door.
health 4:35 p.m.
The Pandemic Has Spiked Our Blood Pressure And the effects of stress could impact our health for years to come.
cover story podcast 4:27 p.m.
That’s an Old Story On this week’s episode, Lily visits the Ecuadoran Amazon to work on a project, and a shaman does something terrible to her.
By the Cut
now open 4:06 p.m.
A New Online Marketplace That Sells Savoir Fare Old Stone Trade, created by the stylist Melissa Ventosa Martin, offers the hard to find.
hot shot 2:40 p.m.
Has Lana Del Rey Entered a New Style Era? Goodbye Maxxinsita period and hello Shein era.
store openings 2:25 p.m.
7 New Stores to Shop at All Holiday Season Mara Hoffman, Parade, and more new stores in New York City.
health 1:53 p.m.
Everything to Know About Rapid Covid Tests At-home tests are (hopefully) about to become a lot more commonplace. Here’s how to use them most effectively.
nightmares 1:20 p.m.
Imagine Sexting Your Dad by Accident Sunday night’s episode of Succession gave us one of the most heinous moments yet.
power 1:17 p.m.
Evan Rachel Wood Says Marilyn Manson Threatened to Harm Her Son In court documents, she claims he also threatened the families of women who came forward with allegations against him.
horny police 12:43 p.m.
Would You Let These Clowns Take Over Your IG? Pete Davidson and Machine Gun Kelly do an underwear ad.
art basel 2021 11:47 a.m.
Judy Chicago Is Tired of The Dinner Party “The girls have their own home now — I’m like, Go and be well.”
By Sangeeta Singh-Kurtz
quiz 10:00 a.m.
What Would Your Selling Sunset Song Sound Like? Figure out your luxury real-estate anthem, you hottie queen boss babes!
#metoo 9:10 a.m.
What We Know About the Disappearance of Peng Shuai After accusing a top Chinese government official of sexual assault, the tennis star’s whereabouts have become the source of international concern.
encounter 8:01 a.m.
At Jamian Juliano-Villani’s New Gallery O’Flaherty’s, ‘Taste Is Out the Door’ The painter and her pals thought the art world had gotten too prissy. “This is the thing. No one’s doing anything cool.”
By Matthew Schneier
advent calendar 2021 8:00 a.m.
Gift of the Day: A Cute, Chunky Claw Clip Give their hair a helping hand.
By Erica Smith
advent calendar 2021 8:00 a.m.
The Cut’s Advent Calendar Gift Guide With a new Cut-approved item every single day.
By the Cut
keeping up with the royals Yesterday at 9:07 p.m.
Prince Harry Is Happy You Quit Your Job The former royal doesn’t think a job should threaten your “mental fitness.”
More Stories