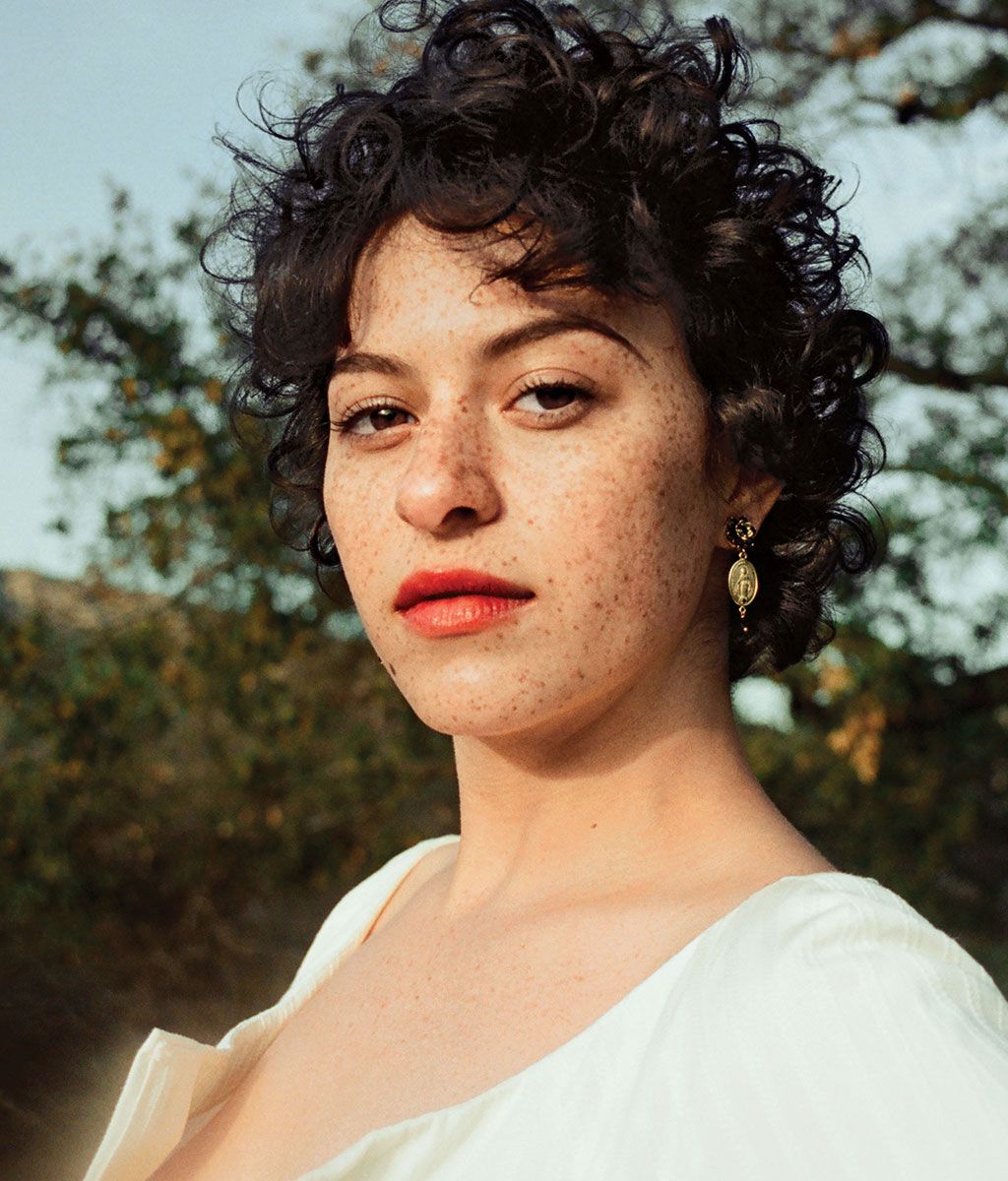 There’s a theory that humans are wired to find the most standard features attractive because features that hew to a norm take less work for our brains to process. The more noselike the nose — that is, the less it taxes the brain with novelty and variation — the better we like it. It’s the theory that launched a thousand onscreen look-alikes.

But the first time I saw Alia Shawkat, as Maeby Fünke on Arrested Development, she jammed my brain. I mean this in the best, most complimentary way. I was struck by the dark eyes shooting lasers from the freckled baby face, the contrast between her unruly curls and her steely nerves. Shawkat played the first cousin and highly inappropriate love interest of Michael Cera’s awkward teenage George Michael Bluth, whose tongue-tied adoration only enhanced her aura of personal power.

“I’ve never been — I always call them ‘clean-haired girls,’ ” says Shawkat. “Like, blonde girls who wear delicate jewelry and their hair always looks really clean. My hair, no matter how much I wash it, just never looks clean.” Growing up, she was always cast as the traditionally pretty girl’s friend. “And that’s how I built my sense of humor. Now I’m like, ‘Oh, I can still be pretty.’ It’s not one or the other.”

When I met Shawkat on a recent Monday afternoon in Silver Lake, she was dressed in a full-sleeved white button-down shirt, looking crisp and elegant despite being slightly hung-over from the night before, when she had been a presenter at the Screen Actors Guild Awards. She hadn’t been looking forward to the event — it felt frivolous given what else was going on in the world. She went to the ceremony wishing she could go back to LAX, where she had spent Saturday protesting the Muslim ban. Shawkat’s father is from Baghdad, and politics have always felt personal to her, “but never like this,” she told me.

Shawkat surprised herself by having a good time at the awards anyway. She wound up talking to people about how to make a difference as artists, and about how being Arab-American was something to be proud of instead of something to be greeted with “You can still play white.” (She’s hoping to play more Middle Eastern roles.) Onstage, Shawkat skipped the scripted jokes and opened with an Arabic greeting meaning “Peace be upon you.” She says the awards show was still silly and fun, but it had a new sense of energy and purpose. “It was like, ‘There’s no time to waste. I love you. You’re beautiful,’ ” she says. “Everyone’s more like, ‘Let’s just be ourselves.’ ”

Shawkat has spent some time thinking about just what it means to “be yourself.” Her older brother used to tease her by saying, “You think you’re so different, doncha?” (Everyone’s different, she remembers thinking.) It got to the point where she developed an aversion to being described that way. “‘You’re different. You’re quirky. You look a little different than everyone else, and you’re sassy,’ ” she recalls being told. “The minute you do something because it’s a genuine act or choice, and somebody goes, ‘Oh my God, we love it because nobody else has chosen that before; that’s crazy!’ You start to be like, ‘Yeah, I pick cool stuff! I’m different!’ It starts to affect you, being false.”

After Arrested Development, Shawkat took a break from acting to paint, but in recent years she’s returned with a handful of eye-catching supporting parts — like the 2015 episode of Broad City where, in a perfect piece of casting, she played the Ilana look-alike whom Ilana hooks up with. In November, she took on her first leading role, playing the heroine in TBS’s Search Party. Her character, Dory, is an adrift 20-something who becomes obsessed with tracking down a missing college classmate she barely knew.

Shawkat says that, through Dory, she’s exploring larger generational questions about responsibility, self-involvement, and finding yourself by engaging with something larger. “The characters are so involved in themselves that they morph their reality,” she says. “She’s trying to find value in something so badly. It’s more important connecting with people and actually listening and understanding and being strong in yourself.” It’s a show that has a lot to say about the pressure to perform in a certain way, for an audience of equally anxious, insecure followers. To Shawkat, the message is, “Yeah, we can’t be like that anymore.”

Alia Shawkat Has Never Been a ‘Clean-Haired Girl’

See All
police brutality 2 mins ago
Chauvin’s Defense Tried to Hide the Latest Police Shooting From Jury After Daunte Wright was killed by police, Derek Chauvin’s lawyer was worried about jury bias.
campaign trail 20 mins ago
7 Women on Where They’re Finding Hope These Days  A new fashion campaign that focuses on the positive.
celebrity babies 22 mins ago
Brenda Song and Macaulay Culkin Had a Baby! The couple confirmed the news: “We’re overjoyed.”
scent memories 5:35 p.m.
The Aromatherapist Who Scents Her Feet Every Night Lake & Skye founder Courtney Somer on essential oils and freshly picked flowers.
By Erica Smith
space x dover street market 3:40 p.m.
Emerging Designers to Shop for Spring The Nordstrom SPACE x Dover Street Market Paris partnership highlights seven up-and-coming brands.
police shootings 3:10 p.m.
Minnesota Police Fatally Shot a Black Man During a Traffic Stop Last night, protesters gathered to mourn the death of 20-year-old Daunte Wright.
mother’s day 2021 2:30 p.m.
Mother’s Day Bouquets for Every Type of Mom (That You Can Order Online) We’re trying to make this easy for you.
By Karen Iorio Adelson
met gala 2021 2:13 p.m.
The Met Gala Is Back in Business It will take place in September (only a little smaller), kicking off a historic, two-part exhibition.
culture 12:30 p.m.
Harry Has Returned to the U.K. for Prince Philip’s Funeral In a heartfelt statement, Harry remembered his grandfather as “cheeky right ’til the end.”
finer things 11:44 a.m.
A Big Hat for Your Huge Brain Go beyond the bucket hat this spring.
By Emilia Petrarca
how i get it done 7:00 a.m.
How Brandi Carlile Gets It Done The Grammy-winning singer-songwriter on touring with an infant, being a Gemini, and her aluminum fishing boat.
By Hope Reese
astrology Yesterday at 8:30 p.m.
Madame Clairevoyant: Horoscopes for the Week of April 12 This week, a new moon in Aries marks a good time to set intentions.
By Claire Comstock-Gay
sex diaries Yesterday at 8:00 p.m.
The Grad Student Rebounding From a Breakup in Hawaii This week’s sex diary.
ahoy Yesterday at 3:02 p.m.
Egypt Is Apparently Unwilling to Return the Ever Given Unless its owners are prepared to pay as much as $1 billion, per reports.
:( Yesterday at 1:16 p.m.
January Jones Finds Herself ‘Forced to Bludgeon Yet ANOTHER’ Snake Her backyard is under siege by a plague of serpents.
in memoriam Apr. 9, 2021
The Resilience of DMX People with out-of-this world talent are no less prone to addiction.
By Ashley Stoney
a beautiful life Apr. 9, 2021
The Pharmacist Who Wants to Go Back to Basics Talking to C.O. Bigelow owner Ian Ginsberg about the upsides of a pared-down routine.
By Erica Smith
gone sale-ing Apr. 9, 2021
The 11 Best Spring Beauty Buys From Sephora’s Sale It’s on right now.
screen time Apr. 9, 2021
Lindsay Bluth’s Style Is Actually Perfect for This Moment Her unhinged, over-the-top attitude is exactly what I’m going for this spring.
all of the lights Apr. 9, 2021
8 Light-Therapy Masks That Will Make Your Skin Glow Even after you take them off.
More Stories