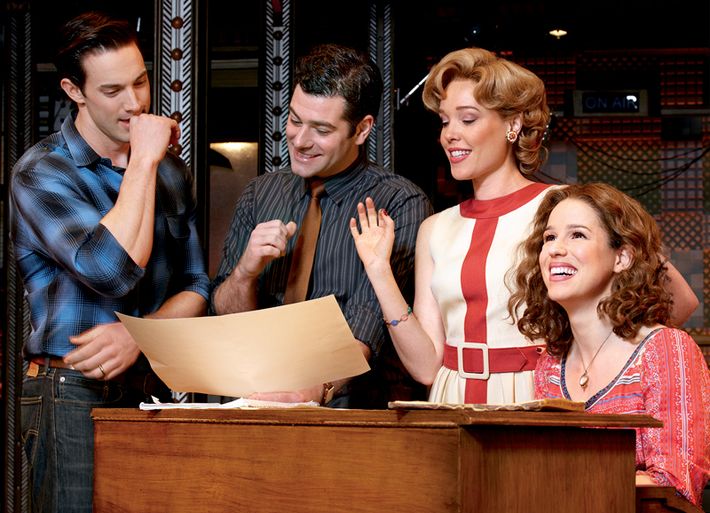 Broadway’s Beautiful: The Carole King Musical tells the story of the eponymous composer/singer-songwriter, from her Brooklyn childhood to music legend status. The inspiring story and familiar Carole King-penned songs make it an effervescent experience for fans and fun-seekers alike.

Luckily, we’re giving readers the chance to score tickets to the show via Twitter. Two winners will receive a pair of tickets each, plus tickets to the annual New York Weddings Event on March 28 at 180 Maiden Lane. There, from 5:00-8:00 p.m., event-goers can peruse dozens of displays, including Beautiful’s own station. The betrothed can find everything they’ll need for their upcoming nuptials – floral design, accessories, bridal party activities (hence, Beautiful), and more.

Follow @BeautifulOnBway and @TheCut on Twitter. At 10 a.m. on Monday, March 20, 2017, @TheCut will post a tweet inviting users to RT to enter to win tickets to Beautiful on Broadway and the New York Weddings event. Retweet that tweet before 10 p.m. on Wednesday, March 22, and you’ll be entered to win.

NO PURCHASE NECESSARY. Sweepstakes is open to legal residents of and physically residing in New York, New Jersey and Connecticut, age 18 or older at the time of entry. Void where prohibited by law. To enter and view complete Official Rules, click here. Begins at 10 a.m. EST on March 20, 2017 and ends at 10 p.m. EST on March 22, 2017. Sponsor: New York magazine.

See All
lunchtime buy 49 seconds ago
This Nectar Makes Any Moisturizer Feel Like La Mer And it’s made from tulips.
2021 inauguration 8 mins ago
We Are Living for Ella Emhoff’s Inauguration Look The First Daughter of Bushwick sends Twitter into a frenzy while in Miu Miu.
2021 inauguration 28 mins ago
Bask in the Brilliance of Amanda Gorman The 22-year-old poet was a ray of light at the inauguration.
fashion 2:00 p.m.
‘God Bless Lady Gaga, and God Bless America’ Words of wisdom from Schiaparelli’s designer.
2021 inauguration 12:59 p.m.
Why Are Women Wearing Chucks and Pearls Today? Kamala Harris has a signature style.
2021 inauguration 12:49 p.m.
Oh My God, Michelle Obama The former First Lady wore a burgundy look by Sergio Hudson to the inauguration.
2021 inauguration 12:25 p.m.
Our Vice President Is a Black Woman Today, Kamala Harris, who is Black and South Asian, became the first woman to ascend to the nation’s second highest office.
power 12:11 p.m.
Finally, He’s Gone It’s dizzying to imagine a Trump-free White House after four years of chaos and targeted cruelty.
fashion 11:52 a.m.
Bernie’s Inauguration Look Is Instantly Iconic The senator wore mittens made from recycled plastic bottles and carried a manila envelope.
2021 inauguration 11:44 a.m.
Kamala Harris’s Inauguration Outfit Is by Christopher John Rogers The incoming vice-president wore a vibrant purple coat.
the cut podcast 11:26 a.m.
Do You Actually Miss Yoga Studios? On this week’s episode, the tension between yoga’s spiritual roots and capitalist promise.
By the Cut
2021 inauguration 11:07 a.m.
Here It Is, Trump’s Last Moment in Washington Watch our soon-to-be-former president scuttle into Air Force One while “Y.M.C.A.” blasts and breathe a sigh of relief.
reading the signs 10:24 a.m.
Good-bye to Trump’s Patriotic Cosplay He gave Americans of all stripes a chance to witness and play at masquerade. What will his supporters do with that impulse now?
By Rhonda Garelick
fashion 10:20 a.m.
A New Beginning, Wrapped in a Camel Coat The vice-president-elect wore Pyer Moss to the COVID Memorial last night.
By Emilia Petrarca
politics 9:31 a.m.
Everything You Need to Know About Inauguration Day Today, Joe Biden and Kamala Harris will become president and vice-president. Here’s how to watch the ceremony and what to expect.
ask polly 6:30 a.m.
‘I Want My Family to Love Me Unconditionally’ The cause of your sadness isn’t the same as the solution.
By Heather Havrilesky
uh oh Yesterday at 7:07 p.m.
The ‘Cocaine Hippos’ Are Out of Control Eighty to 100 invasive hippos are running roughshod over Colombia’s Magdalena river basin — and scientists fear their ranks could swell.
break ups Yesterday at 6:20 p.m.
Looks Like Clare and Dale Are Already Breaking Up Bachelorette couple Clare Crawley and Dale Moss are going their “separate ways.”
next level Yesterday at 5:18 p.m.
The Joys and Perils of Quitting to Do What You Love  An honest conversation with stylist Reva Bhatt.
By the Cut
politics Yesterday at 5:01 p.m.
Biden Picks Trans Doctor Rachel Levine as Assistant Health Secretary If confirmed, Levine will become the highest-ranking transgender official in the U.S. government.
More Stories