McQueen is deeply rooted in ancient British landscapes, while Rihanna and Stella McCartney reflect a lighter approach to Parisian culture. 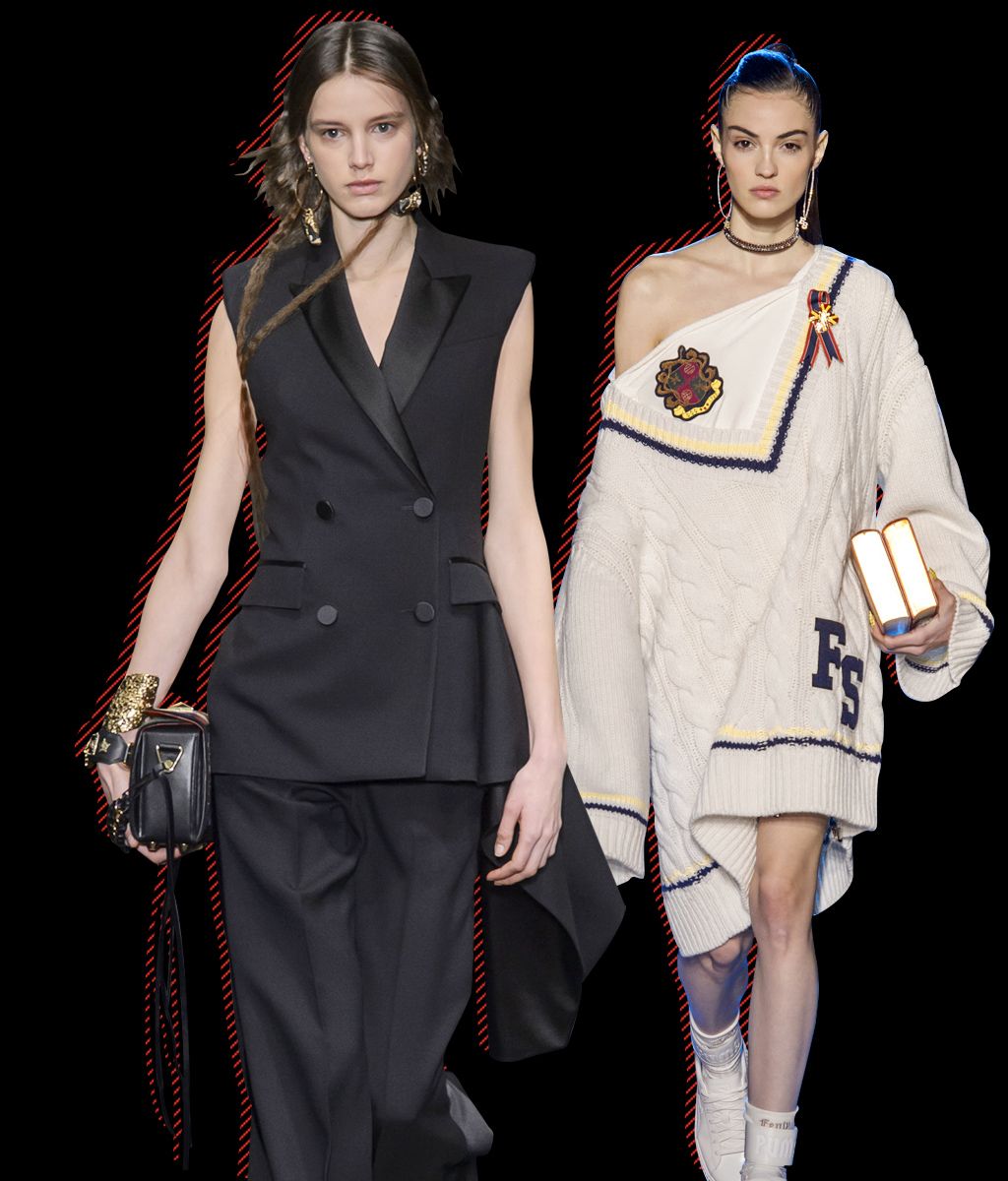 Fashion designers have their pick of France’s greatest cultural landmarks, like the Bibliothèque Nationale, where last night Rihanna staged her latest Fenty x Puma show in the main reading room. Generally, they offer a Cliff Notes version of culture — and why not? It’s a ten-minute fashion show, not Descartes.

Rihanna made decent ham of the American-college theme, sending out tartan puffer jackets and pj bottoms, Fenty U sweaters and cropped tops with regulation underboob. The kids walked on the long tables, which, like the thousands of books on the shelves, were replacements, just for the show.

Stella McCartney, who takes over the Opera Garnier every season, tends to keep her cultural references light. A Stubbs painting provided an equestrian theme — excellent tailoring in the form of nipped-waist tweed coat dresses, pantsuits with a soft version of hunting blouses, coats with deep side vents, and big sweaters featuring a stallion head. McCartney followed up with more utilitarian gear, like olive jumpsuits and organic raw-denim fitted jeans and jackets, but the tailoring, with its slightly elongated sleeves and sharp creases, stole the show.

Pierpaolo Piccioli turned to the trusty Victorians for the style of Valentino’s many high-necked, long-sleeve dresses, and then added an aesthetic layer of Memphis, the 1980s Italian design movement. That’s actually not as awful as it sounds. Piccioli mainly confined the Memphis to squiggle and patchwork patterns, and clear bright colors, like lilac and ice blue (the latter for a lovely sleeveless dress in pleated silk). The takeaway from this quietly strong collection was really the graceful, free-flowing dresses. It’s an easy, and inspiring, silhouette for fall.

By rights, Hermes should be the flagship brand for French savoir faire. It’s one of the oldest houses going, and of course its leather goods are in a class apart. I would put its menswear in that category, too. But its women’s fashion, under Nadège Vanhee-Cybulski, truly baffles. She started out at Hermes with minimalist, if rather staid, clothes, and then attempted to loosen up. Yesterday, though, she was basically throwing darts at various ideas — cropped leather jackets, classic country styles, paisley silk dresses, archival scarf prints, and some separates in a harsh palette of avocado, teal, jade, and lilac. Individually, most pieces would find a customer, but they don’t add up to an interesting vision. At a time when a number of brands have been successfully renewed — Loewe, Cèline, Calvin Klein — Hermes is missing an opportunity.

What I liked so much about the Alexander McQueen show, in contrast to others this week, is Sarah Burton’s genuine passion for land and country. It’s something of a McQueen tradition, of course, but Burton is one of the very few designers to see the richness — and modernity — in ancient British landscapes and communities. What’s more, she goes in deep. The cloutie trees in Cornwall — to which people make spiritual pilgrimages to hang ribbons on the branches — inspired slim tweed dresses shot with multicolored yarns, the ends left dangling. Cross-stitch samplers — those humble things that often wind up on souvenir tea cozies — led to some extraordinarily refined dresses and tunics in black-and-red cross-stitch on ivory silk. Each miniature sampler revealed a Cornish scene, and the scenes added up to a kind of love note.

Who in this grasping, often grubby business bares their heart like that? Burton does. And it has distinguished McQueen, in part because she and her team are so good at translating cultural or historical motifs into real and nuanced clothes, as they did last season with the Shetland Islands–inspired collection. This time the clothes are especially youthful — the tiered knit minidresses that slightly evoke medieval armor, black leather pieces with simple lacing, the tough shearling jackets studded with biker metal. It’s good fashion alchemy, and it begins in a sincere place.

grief 6:00 p.m.
Nick Cannon’s Youngest Son Dies From Cancer Zen Scott Cannon was five months old.
catching up 5:22 p.m.
So … What Happened on Sex and the City Again? A cheat sheet to where we left off and where And Just Like That … picks up.
5 questions with... 4:39 p.m.
Chatting With WNBA Player Dearica Hamby, the New Face of Jordan On why she sometimes needs to just go into a room by herself and close the door.
health 4:35 p.m.
The Pandemic Has Spiked Our Blood Pressure And the effects of stress could impact our health for years to come.
cover story podcast 4:27 p.m.
That’s an Old Story On this week’s episode, Lily visits the Ecuadoran Amazon to work on a project, and a shaman does something terrible to her.
By the Cut
now open 4:06 p.m.
A New Online Marketplace That Sells Savoir Fare Old Stone Trade, created by the stylist Melissa Ventosa Martin, offers the hard to find.
hot shot 2:40 p.m.
Has Lana Del Rey Entered a New Style Era? Goodbye Maxxinsita period and hello Shein era.
store openings 2:25 p.m.
7 New Stores to Shop at All Holiday Season Mara Hoffman, Parade, and more new stores in New York City.
health 1:53 p.m.
Everything to Know About Rapid Covid Tests At-home tests are (hopefully) about to become a lot more commonplace. Here’s how to use them most effectively.
nightmares 1:20 p.m.
Imagine Sexting Your Dad by Accident Sunday night’s episode of Succession gave us one of the most heinous moments yet.
power 1:17 p.m.
Evan Rachel Wood Says Marilyn Manson Threatened to Harm Her Son In court documents, she claims he also threatened the families of women who came forward with allegations against him.
horny police 12:43 p.m.
Would You Let These Clowns Take Over Your IG? Pete Davidson and Machine Gun Kelly do an underwear ad.
art basel 2021 11:47 a.m.
Judy Chicago Is Tired of The Dinner Party “The girls have their own home now — I’m like, Go and be well.”
By Sangeeta Singh-Kurtz
quiz 10:00 a.m.
What Would Your Selling Sunset Song Sound Like? Figure out your luxury real-estate anthem, you hottie queen boss babes!
#metoo 9:10 a.m.
What We Know About the Disappearance of Peng Shuai After accusing a top Chinese government official of sexual assault, the tennis star’s whereabouts have become the source of international concern.
encounter 8:01 a.m.
At Jamian Juliano-Villani’s New Gallery O’Flaherty’s, ‘Taste Is Out the Door’ The painter and her pals thought the art world had gotten too prissy. “This is the thing. No one’s doing anything cool.”
By Matthew Schneier
advent calendar 2021 8:00 a.m.
Gift of the Day: A Cute, Chunky Claw Clip Give their hair a helping hand.
By Erica Smith
advent calendar 2021 8:00 a.m.
The Cut’s Advent Calendar Gift Guide With a new Cut-approved item every single day.
By the Cut
keeping up with the royals Yesterday at 9:07 p.m.
Prince Harry Is Happy You Quit Your Job The former royal doesn’t think a job should threaten your “mental fitness.”
crime Yesterday at 7:01 p.m.
Everything to Know About Jussie Smollett’s Trial The actor was accused of staging his own hate-crime attack in 2019. Things only got more complicated from there.
More Stories