Lanvin and Margiela wrestle with liberty, rigidity, and diversity. 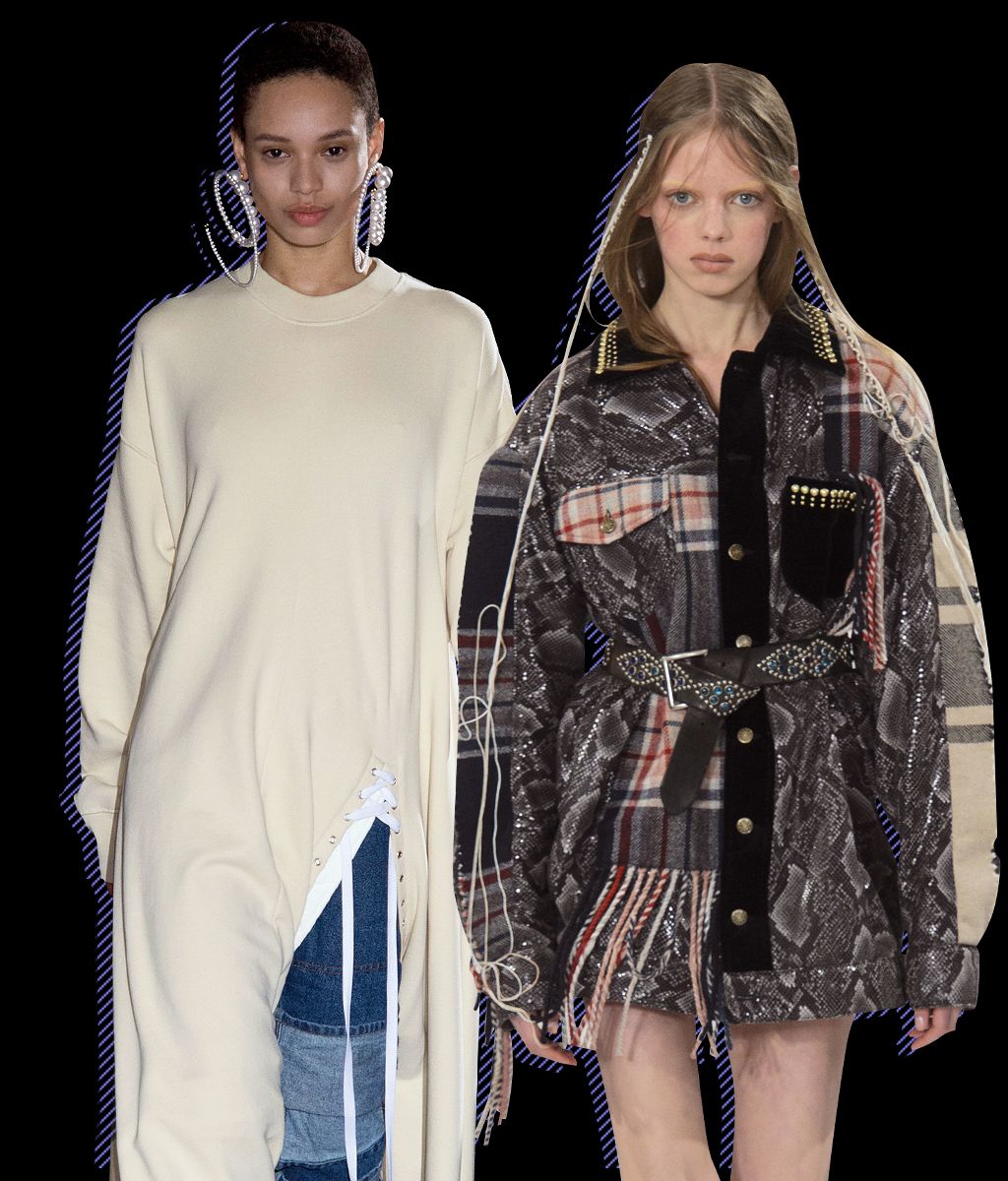 Models are the rats of the fashion world: living on cigarettes, squeezing through impossible spaces, leaving the rest of us behind as they bolt for their motorbikes and drivers. I say this in fondness. Today, while stuck in a slow-moving throng exiting a dreary Lanvin show, I watched three models slip between a wall and a statue — a gap of perhaps six inches — and skip down the steps into the soft Paris rain. One was enjoying a smoke by the time I reached the curb.

Such an escape could not have been finessed in the precious clothes we’d just seen. Bouchra Jarrar, in her second season as the creative director of Lanvin, does not seem to know how to make relaxed, modern clothes. She’s good with tailored things, but far too many of the looks in the show, at the ornate Hotel de Ville, involved floaty skirts in ivory or powder-pink georgette, as well as sheer tops with lace and ruffles and sometimes even a black bow at the neck. Many of the clothes looked haute couture, but in the old comme il faut sense, with nothing out of place and a feather-tipped pin jauntily worn on your lapel.

The paradox here is that even though Jeanne Lanvin, like her rivals Coco Chanel and Alix Gres, worked in an era when women were much less free than they are now, their highly embellished, finely crafted clothes expressed an adventurousness that so far eludes Jarrar. In the 1920s and ‘30s, designers — especially female designers — were experimenting with new cutting methods (think of Madeleine Vionnet’s revolutionary bias-cut gowns) to express more liberated attitudes. Today, the watchwords are comfort and extreme individuality, embodied in the designs of a brand as well as the choice and styling of its models. The best examples of this during the New York collections were the Marc Jacobs and Calvin Klein shows — super-wearable clothes combined with diverse, unique models. But Jarrar stuck to a predominantly white cast, and the fit of her garments was generally conventional, however glossy the fabrics. Rigid thinking shows.

Maison Margiela was also very white — and here a more diverse cast would have made all the difference, because the collection was so good. John Galliano opened the show with a dirty-blonde model in a classic tan trench coat and pair of white pumps, except the back of the coat was cut out in the shape of Lady Liberty’s head, with the lining in a beige check sort of similar to Burberry’s. Of course it brought to mind the Miguel Adrover coat from 15 years ago, with a back repurposed from an old Louis Vuitton bag. A Margiela rep said later that the trench, along with an oversized black turtleneck, was a nod to Marilyn Monroe. The show’s deconstructed varsity jackets were a wink at her years with Joe DiMaggio.

Why not? Galliano typically shoves a lot in his blender. But this time I liked how the results came out: ultra-fitted, waist-high jeans; a white organza mini shift with two black censor-bar-like panels worn over a white body-paint T-shirt (a good example, I guess, of DIY couture), and some wonderful coats, including a single-breasted number in black wool, made without a back and worn over a bright orange sweater. It was a good example of Galliano’s light hand with both Margiela’s icons and his own long history of deconstruction. You could also imagine it going out into the wet Paris streets immediately.

What I loved most about Glenn Martens’s designs for his Y/Project label was his total mastery of volume. With sweeping, floor-length dresses in what looked like sweatshirt jersey, and fat jacket sleeves that rippled in multiple folds, he was obviously riffing on royal rags. A long, multihued football scarf featured the heads of Napoleon and Joséphine. Denim looked as if the model had stepped into a pile of discarded jeans — say, at a party where everybody got naked — and walked away in the morning with bits fluffily clinging to her cuffs. The results always leaned more to the rapper than the royal — as they should — but Martens’s deep dives into the past were also imaginative, as well as a good lesson in how to keep it modern.

day in the life 1 min ago
The Anti-Wedding Wedding Planner Everything it takes to throw a “love party.”
for your consideration 3:30 p.m.
The Best Way to Spend the 4th of July Tips for enjoying the long weekend when you’re not in the mood to celebrate America.
parties! 1:04 p.m.
Selena Gomez, Emily Ratajkowski, and More of the Bestest Party Pics This Week This week: Marc Jacobs’s fall 2022 presentation, NFT parties, and Pride celebrations.
instagram worthy 1:00 p.m.
Expensive Elopements Are the New Dream Wedding The more elaborate — and exclusive — the better.
By Kate Willsky
fashion 12:36 p.m.
Virgil Abloh’s Vision, on Full Display at the Brooklyn Museum We chatted with “Figures of Speech” curator Antwaun Sargent, who worked on the exhibition with Abloh before the designer’s death.
power 12:35 p.m.
Everything to Know About the WNBA Star in Russian Custody Legal experts say Brittney Griner’s trial is likely to end in conviction.
explosions 12:33 p.m.
Goop Candles Continue Their Campaign of Terror in the Hamptons Two men reportedly caught fire in a Sag Harbor Goop store.
gone sale-ing 12:00 p.m.
Your July 4 Sale Shopping Guide That NuFACE you wanted? It’s on sale.
rsvp yes 11:00 a.m.
Winning the Wedding-Season Marathon How guests with fully booked weekends are getting through it all. (Excel, mostly.)
By Emilia Petrarca
the kardashians 10:30 a.m.
I Can’t Shut Up About ‘Krissing’ A TikTok trifecta: Kris Jenner, catchy audio, and being obnoxious.
By Mia Mercado
allegations 10:23 a.m.
All the Allegations Against Ezra Miller In the past few months, the actor has been arrested twice, repeatedly accused of physical assault, and accused of brainwashing a minor.
life after roe 10:14 a.m.
Are Social-Media Platforms Censoring Information About Abortion? Facebook and Instagram have been restricting and removing posts intended to help people seeking reproductive care.
encounter 8:00 a.m.
Becca Tilley Gets Her Rose Coming out to Bachelor Nation wasn’t easy, but it sure felt good.
By Katie Heaney
the grub street diet 6:00 a.m.
Rachel Antonoff Names Her Pies “I’m like, ‘Do you prefer Bob or Judy?’”
By Rachel Sugar
crime Yesterday at 5:58 p.m.
A Mother Pushing a Stroller Was Shot and Killed in Manhattan Investigators say 20-year-old Azsia Johnson was shot at “very close range” while on the Upper East Side Wednesday night.
5 questions with... Yesterday at 4:43 p.m.
Saucy Santana on the Formula for Going Viral Santana makes viral videos in one take. He does so by staying true to himself.
the body politic Yesterday at 4:00 p.m.
The Abortion Stories We Didn’t Tell How decades of silence left us unprepared for the post-Roe fight.
By Rebecca Traister
pride Yesterday at 2:00 p.m.
‘I’m Trying to Focus on the Joy’ Celebrating 20 years of Pride in St. Petersburg amid Florida’s anti-LGBTQ+ crusade.
By Ashley Dye
that's hot Yesterday at 1:19 p.m.
Paris Hilton Has Her Priorities Straight No president is more important than Britney, bitch.
trendspotting Yesterday at 1:00 p.m.
The Bride Who Didn’t Care Meet the too-cool-for-tradition aesthetic.
By Laura Pitcher
More Stories