You know that feeling when you’re chatting with a perfectly pleasant stranger — maybe it’s at a networking thing, or maybe they just want some help navigating the subway — and then they shift their weight so they’re just a bit closer, and all of a sudden a nice-enough conversation turns into something torturous that you can’t wait to escape?

Having your personal space invaded is a universally icky feeling, but as Christian Jarrett recently explained in BPS Research Digest, there’s no one universal threshold for discomfort — one person’s comfortable distance is another’s way-too-close, depending in part on personality, social anxiety, and how you feel about whomever you’re talking to. And in a study recently published in the Journal of Cross-Cultural Psychology, researchers found that culture plays a role, too.

The study authors recruited roughly 9,000 volunteers in 42 different countries, showing them a graphic of two people and asking them to indicate the minimum distance they would need to feel comfortable with a stranger, an acquaintance, and a close friend. 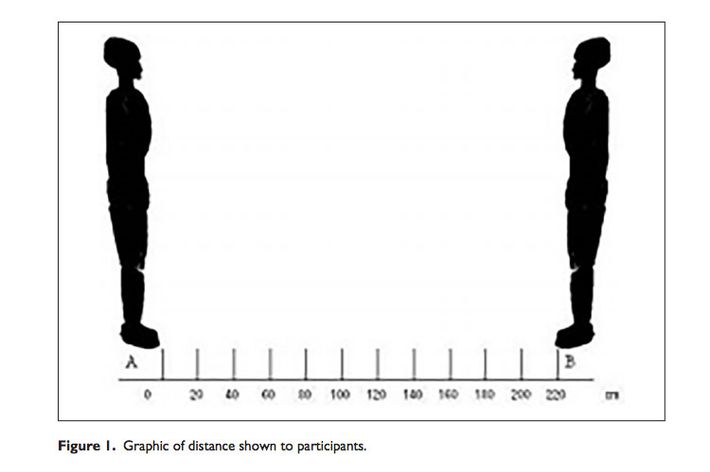 And here’s a summary of the results: 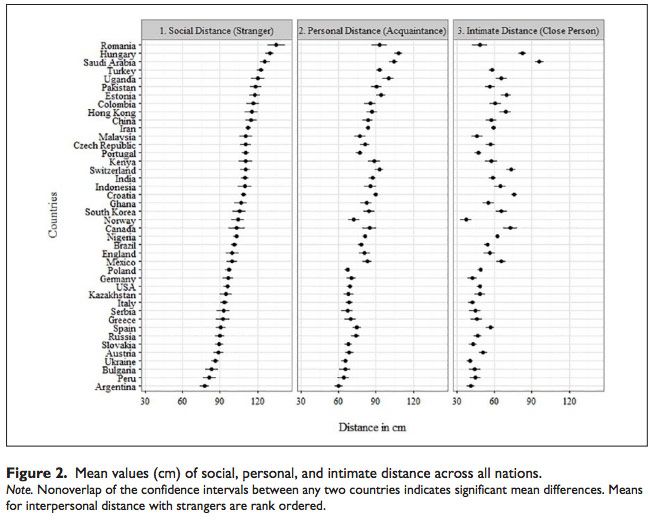 Some highlights: Of all the countries included, Romania was the one where people were the wariest of space-invading strangers, and Argentina was the chillest; Norwegians were the most content to get extra-close to a close friend, while Saudi Arabians were most likely to keep a healthy distance even from their best pals. Within each country, women and elderly volunteers were also more likely to require more space. As Jarrett explained, there were some loose patterns that helped to explain the country distribution somewhat:

[The study authors] also looked to see if international differences in climate and vulnerability to parasites might correlate with preferred interpersonal differences. The parasite measure wasn’t relevant, but average temperature was: in warmer countries, participants tended to be happier with smaller distances when chatting to strangers, perhaps because people feel socially closer in warmer climes, the researchers speculated; in contrast, when it came to intimate relationships, it was colder countries that were happier with smaller distances, perhaps as a way to stay cosy!

It’s something that might be good to keep in mind next time you’re traveling: Whether you’re trying to make a new friend or just trying to get directions, it may be best to stand still and let the locals set the boundaries.

Here’s How the Rest of the World Defines Personal Space