Handbag designer Judith Leiber’s eccentric, colorful purses have appeared on the wrists of everyone from Hillary Clinton (see this incredible cat purse) to Sex and the City’s Carrie Bradshaw (remember the glittery swan purse Big gives Carrie in season two, instead of just telling her “I love you”?). The exhibition “Judith Leiber: Crafting a New York Story,” opening April 4 at New York’s Museum of Arts and Design, will honor Leiber’s 65-year-long career and pay homage to her rise from Holocaust survivor to influential handbag designer.

As a young woman, Leiber spent much of World War II hiding from Nazi persecution; the majority of this time was spent in a small apartment with 26 other Hungarian Jews seeking refuge from Hitler’s regime until her home city of Budapest was liberated. After the war, Leiber began to work her way up as a designer, making handbags for secretaries of the American Legation despite her lack of resources. “I already had ideas of my own that I made, but at the time, we didn’t have that wide of a possibility yet,” Leiber told the Cut. “The materials we could get were very limited. We had been at war, and the leather makers had been making items to support the war effort.”

In 1963, Leiber opened her own company in her name, a little over a decade after she immigrated to New York. As her own boss, Leiber had the freedom and materials to begin designing over-the-top, colorful bags that became the brand’s signature look. She produced every type of bag imaginable while running the company for six decades, from tiny bejeweled clutches shaped like snakes, swans, a bushel of asparagus, penguins, and Buddha to bags artfully embellished with entire cocktail-party scenes in rhinestones. Inspirations for her bags were infinite, from art, gardens, and jewels to buildings she saw while traveling. “I got the idea for the Penguin minaudière from a friend who was married to a famous explorer and traveled to Antarctica,” she said. “She came home with stories of the penguins she saw and I got the idea to make a penguin handbag.”

Leiber left the company in 1998, having left her mark on the fashion world. “What she did was groundbreaking,” Harold Koda, former curator of the Costume Institute of the Metropolitan Museum of Art, recently told the New York Times. “She gave bags and purses a narrative. This conceptual focus makes them playful or surreal, sometimes both. She makes me think of Salvador Dalí and his telephone-dial compacts.”

The MAD exhibition will be on view until August 6 and features nearly 100 of Leiber’s handbags, along with memorabilia and photographs that trace her career. Click ahead to see purses in the exhibit, including a rhinestone-encrusted watermelon and a Buddha clutch. 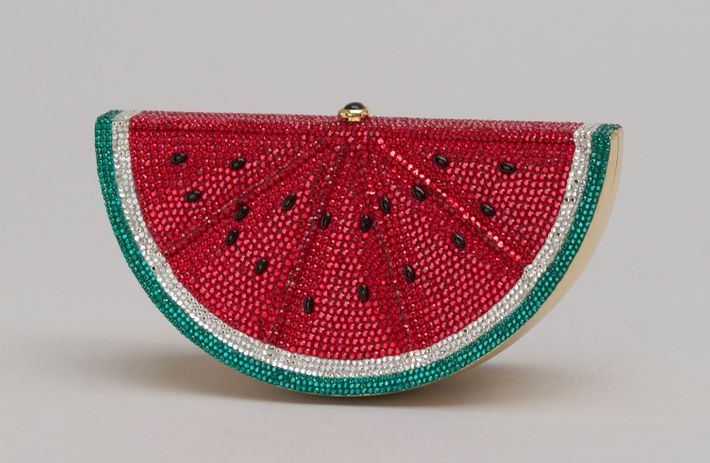 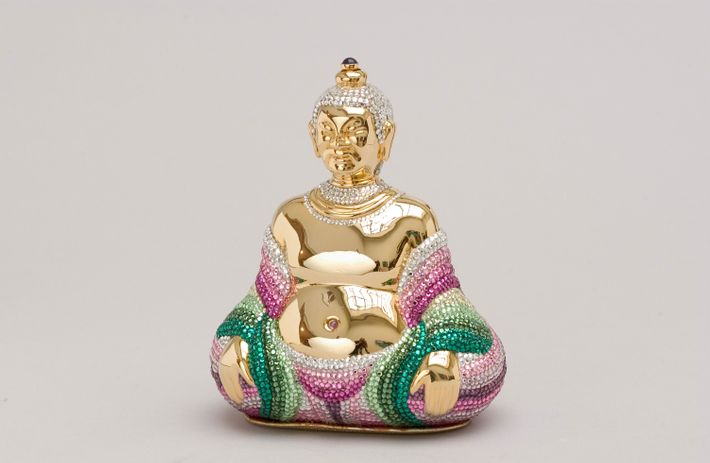 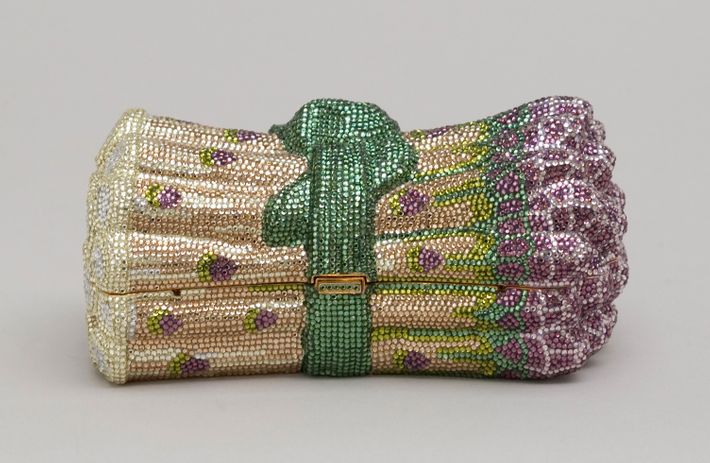 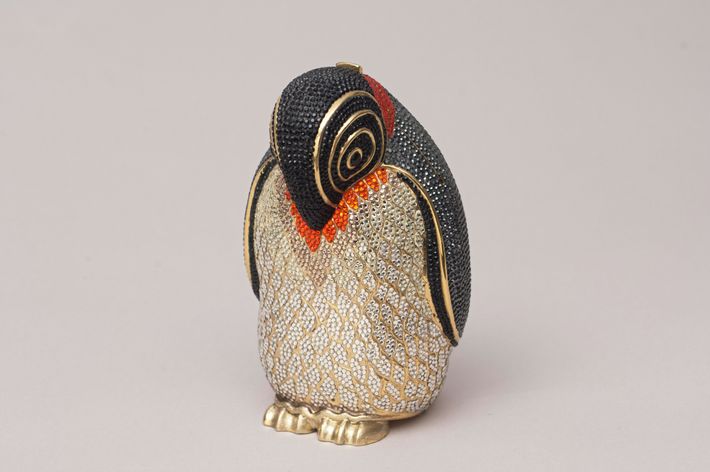 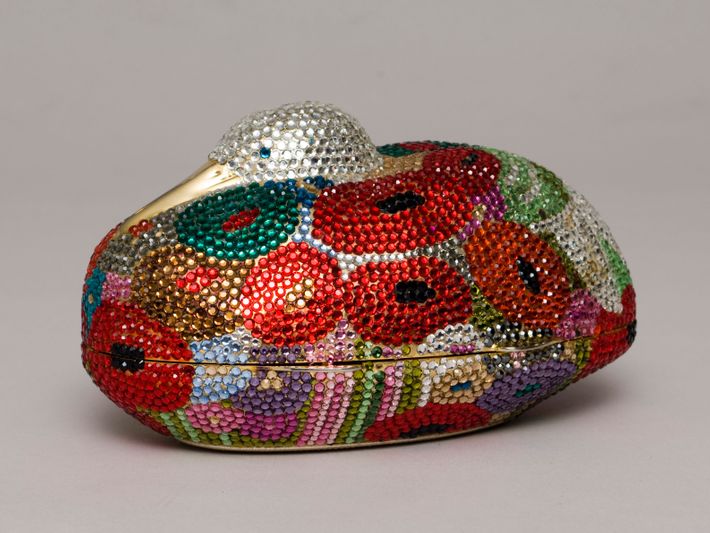 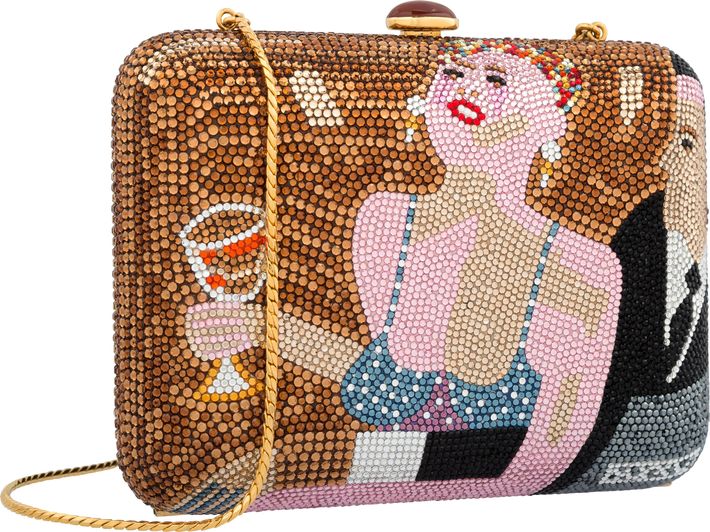 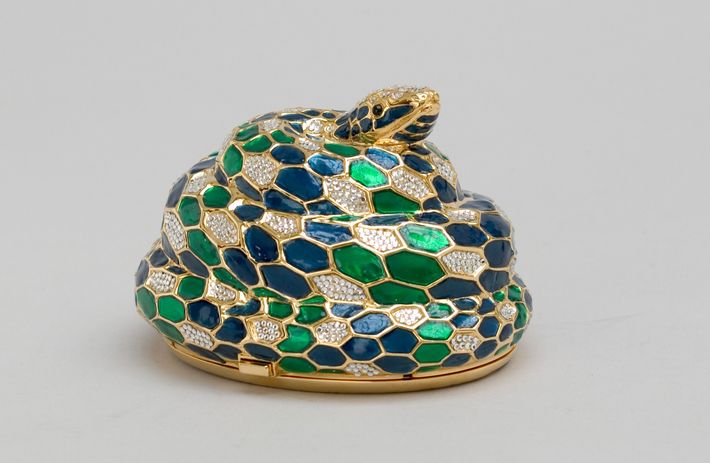 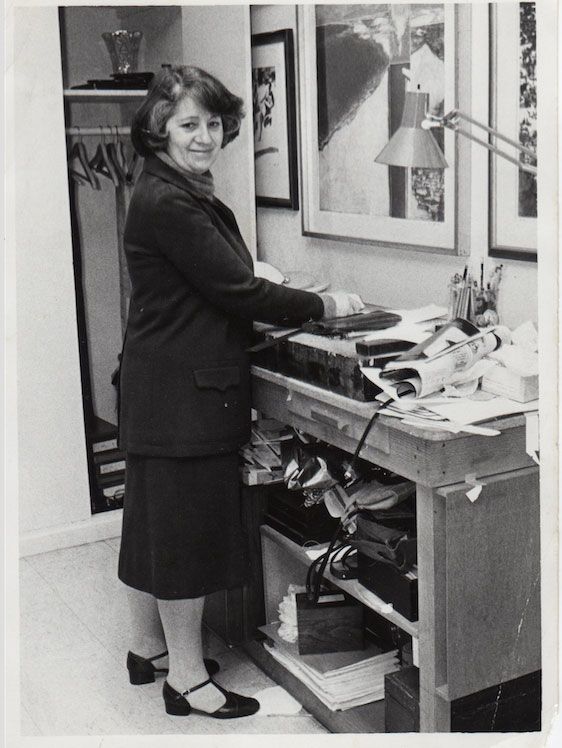 Judith Leiber at work in her studio.

Hillary Clinton and Sex and the City Loved These Purses

hairy situations 3:46 p.m.
Wait, So Now Even My Hair Is Aging? Ugh.
By Parizaad Khan Sethi and Shanna Shipin
tyre nichols 3:16 p.m.
A Sixth Officer Has Been Suspended After Tyre Nichols’s Death: Updates The officer was relieved of duty the same day the five officers charged with murder were fired for the beating.
documentaries 1:31 p.m.
‘For So Long, I Had Larry in My Ear’ In an exclusive clip from Hulu’s Stolen Youth docuseries, Larry Ray survivor Felicia Rosario opens up about the impact of his gaslighting.
keeping up with the royals 12:37 p.m.
Could the Spice Girls Get Harry to the Coronation? Sources are saying the palace is “super keen” to get “Britain’s biggest girl band” involved.
sparking joy 11:00 a.m.
Marie Kondo Has ‘Kind of Given Up’ on Being Neat Validation for messy homes everywhere.
transgender rights 10:59 a.m.
Utah Bans Gender-Affirming Care for Trans Youth Already this year, Republican lawmakers have proposed more than 150 bills limiting the rights of trans people.
spring fashion 8:00 a.m.
The Promise of Pyer Moss Kerby Jean-Raymond was one of fashion’s most celebrated young designers. Then what happened?
By Tahirah Hairston
spring fashion 8:00 a.m.
It’s Glo Time Grammy nominee GloRilla is figuring out how to be famous while staying F-R-E-E.
By Tirhakah Love
spring fashion 8:00 a.m.
The Hustle of Women in Hip-Hop Editor-in-chief Lindsay Peoples on launching the celebration of 50 years of women in hip-hop who’ve changed the game.
By Lindsay Peoples
how i get it done 7:00 a.m.
How Political Commentator Molly Jong-Fast Gets It Done “We’re a pretty sedentary bunch, but we do a lot of dog-walking. Also, I try to visit my mom once or twice a week depending on how guilty I feel.”
sex diaries Yesterday at 8:00 p.m.
The Creative Director Getting a Little Tired of Feeld This week’s sex diary.
snl Yesterday at 3:48 p.m.
Michael B. Jordan Is a Different Kind of Jake From State Farm See him rock the red polo and khakis on SNL.
celebrity couples Yesterday at 12:28 p.m.
This Good Morning America Romance Keeps Getting Messier Amy Robach and T.J. Holmes are out at ABC.
astrology Yesterday at 8:30 a.m.
Madame Clairevoyant: Horoscopes for the Week of January 30 The overarching astrological story right now is one of growth, action, and following through on intentions.
By Claire Comstock-Gay
spring fashion Jan. 27, 2023
12 Ways of Looking at André Leon Talley The friendships and love stories found inside his estate auction, as told by Anna Wintour, Marc Jacobs, and Tom Ford, and more.
By Cathy Horyn
wait what is happening on tiktok? Jan. 27, 2023
Everything We Know About TikTok’s Lashgate Drama Did Mikayla Nogueira add false lashes or not?
parties! Jan. 27, 2023
Teyana Taylor, Anna Camp, and More of the Bestest Party Pics This Week Parties with Gucci, Sundance, and more.
gone sale-ing Jan. 27, 2023
10 Things You Don’t Have to Pay Full Price for This Week Deals from Dyson, Nordstrom, Shopbop, and more.
friday sales Jan. 27, 2023
19 Things on Sale You’ll Actually Want to Buy: From Lunya to Areaware Including fuzzy Birkenstock clogs, a teensy Cricut heat press, and our favorite weekender bag from Patagonia.
recommendations Jan. 27, 2023
20 Best Butt Plugs You Can Buy Online According to experts.
More Stories