In Space, There Will Be Chanel Logos

Karl achieves liftoff; plus, Louis Vuitton at the Louvre. 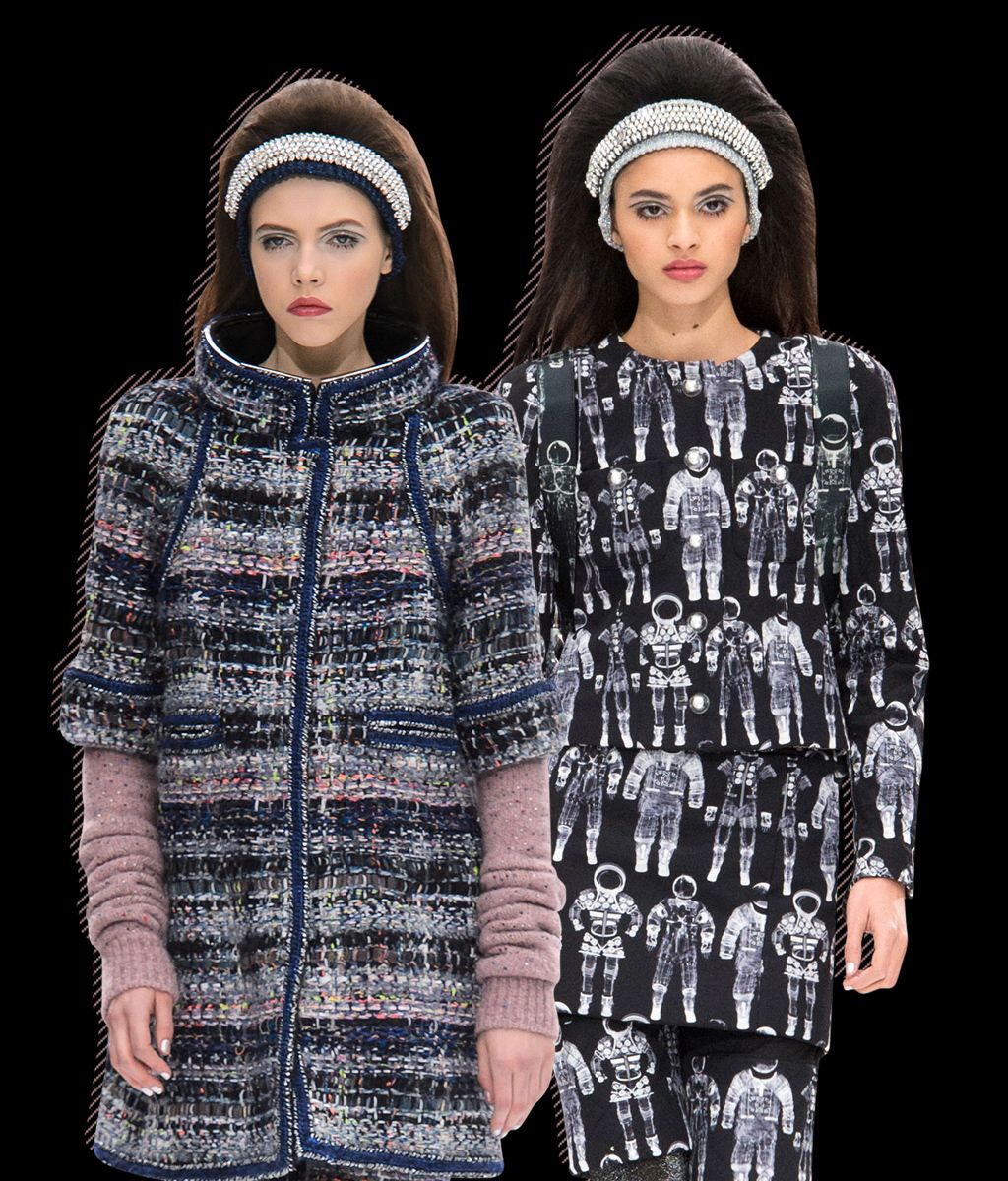 No one would mistake a replica of a space rocket in the middle of the Grand Palais for anything but a Chanel show. It makes perfect sense. At this stage, where else can Karl Lagerfeld go? He’s re-created an iceberg, a farm, a chic supermarket. He’s taken audiences to Cuba and the Great Wall. Distant galaxies suddenly seem less remote when your ride bears the dependable CC logo.

The funny thing is the rocket really did appear to lift off. The models had made their last loop of the runway/landing stage. There were some electronic wheeps and beeps, escaping gas from the launch pad, and then the countdown … ten, nine, eight … as the metal struts snapped away, the rocket boosters flared and roared, and the ship rose by hydraulic magic, as many hundreds of adults looked up in genuine if mild disbelief.

Is it any wonder that Chanel can still seduce in the 21st century, more than 100 years after Gabrielle Chanel sold her first hat on the Rue Cambon? The pure, manufactured silliness of yesterday is now zipping around the world, on smartphones and other screens; and in five or six months’ time, Lagerfeld’s silver leather skirts and astronaut-print chiffon dresses will be in boutique windows. Whatever the merits of some of the designs — long, dowdy pleated skirts that belonged in orbit — you simply cannot underestimate the power of the Chanel brand.

Later in the day, after the Louis Vuitton show in the sculpture court at the Louvre, and after I had pretty much convinced myself that earthlings disregard Lagerfeld’s spectacles, I met a woman, an accessories designer from Munich, at the bar at Le Castiglione. She excitedly asked me about the “rocket,” and then revealed that she had two dreams in life: one was to attend the Oscars, the other to see a Chanel show.

Understandably, regular viewers can zone out when faced with the sheer quantity of stuff that Lagerfeld feels he must put on the runway. The approach also reflects his belief that the luxury brand is essentially a Christmas tree — his term — that soaks up a lot of signature trims and ornaments, like pearls and chains, though they can always be arranged differently. This season’s best bouclé jackets were in a tattersall check of cream, silver gray, and black, worn with shorts or (better) trousers. There was also a good-looking suit in cream wool with a short wrap skirt — shown, like everything else, with snub-toed glitter boots — and many wool tunics (with shorts) and dresses that featured a round, stand-away collar, as befits a space theme.

Sometimes, though, it isn’t the theme of a Lagerfeld show that looks heavy, but rather the need — surely automatic by now — to stamp Chanel’s signature shapes and details on virtually every garment. Quilting a drab gray sports top and pants is in service to branding, and not design.

Louis Vuitton spent three years negotiating with the Louvre to show amid classical sculpture, an LV executive told me with some pride. Did it make a difference to Nicolas Ghesquière’s collection? Not really, but big Paris houses are competitive about this sort of thing. And it was dramatic to see his eclectic cast of young models, with loose hair and minimal makeup, come down a succession of stone steps bathed in soft light.

In fact, they could have kept going, out the door and into the street, since their clothes looked so contemporary. Ghesquière offered a variety of nicely detailed but easy jackets — in antiqued brown leather, in fur patchwork — that could be worn interchangeably with sleek trousers or short, flared skirts. There were boldly patterned sweaters, and a lovely, almost old-fashioned spread-collar blouse in white silk, shown with a sharp black-leather jacket and polished tan trousers.

The effect, to me, was extremely simple and direct, with the effort concentrated in the fit and small details, in particular fabrics with shine and novel, almost plastic textures. Ghesquière put everything, including evening slips — barely cloaked in a rough piece of lambskin — with a chunkier version of jodhpur boots, some to the knees.

Leaving the museum, a stylist I know complained that the collection was “not new” and that Ghesquière was no longer in touch with “how young girls dress.” It’s true that for most of his years at Balenciaga, Ghesquière was an avatar of cool. But, as I told my friend, I wouldn’t put any faith in a “young” brand like Miu Miu, which stuffed its runway with candy-colored fake furs that looked very overdone.

Besides, I said, the world is completely different than it was in 1999, when Ghesquière could seemingly do anything and people, all ages, would follow.

No, I thought, as we reached the curb, teeming with young people there to watch the usual editors, models, and front-row types like the actress Michelle Williams: On this last day of Fashion Week, better to know your own place and time than to stick your finger, hopefully, in the indifferent wind.

In Space, There Will Be Chanel Logos

celeb friendships Yesterday at 9:11 p.m.
I Need An Oral History Of This Ivy Park Ad Reese Witherspoon’s kids are Ivy Park models now
spider-man Yesterday at 7:45 p.m.
This Sparks Joy Tom Holland and Zendaya posed for photos together, and I am much too happy about it.
news Yesterday at 7:36 p.m.
Chris Cuomo Is Out CNN has suspended Chris Cuomo “indefinitely.”
fashion Yesterday at 6:00 p.m.
Watch the Louis Vuitton Men’s Show and Tribute to Virgil Abloh Watch the show live from Miami.
i'll have what she's having Yesterday at 6:00 p.m.
Cardi B Is Here to Save Ice Cream She makes alcoholic whipped cream now.
bye colonialism Yesterday at 5:31 p.m.
Rihanna Is Officially a National Hero From now on, she is the only queen Barbados will recognize.
kyle rittenhouse Yesterday at 5:17 p.m.
Kyle Rittenhouse’s Classmates Don’t Want Him on Campus Fellow students at Arizona State are demanding the university kick him out.
wacky hats Yesterday at 5:14 p.m.
Unpacking the New And Just Like That… Trailer Featuring Carrie podcasting about masturbating in Barney’s and Big riding a Peleton.
power Yesterday at 5:01 p.m.
Elizabeth Holmes Says Ramesh Balwani Abused Her The Theranos founder testified that her former boyfriend and business partner manipulated and sexually assaulted her.
school shootings Yesterday at 4:44 p.m.
A 15-Year-Old Reportedly Opened Fire at a Michigan High School Three students are dead and the gunman is in custody, according to the local sheriff’s office.
celebrity breakups Yesterday at 3:20 p.m.
Hamilton’s ‘It’ Couple Has Reportedly Split Anthony Ramos and Jasmine Cephas Jones have apparently broken off their engagement.
from the archives Yesterday at 2:22 p.m.
Sexual Assault in the Amazon As the ayahuasca tourism industry grows, so do accounts of abuse.
By Rachel Monroe
abortion Yesterday at 1:59 p.m.
What to Know About the Abortion Case Set to Challenge Roe v. Wade The Supreme Court is set to hear arguments on a Mississippi law that would ban most abortions after 15 weeks.
explainer Yesterday at 1:00 p.m.
What We Know About COVID-19 Booster Shots The FDA is now recommending all adults over 18 get a booster shot.
cover story podcast Yesterday at 12:10 p.m.
‘I See a Sh*tshow’: Inside the World of Psychedelic Therapy Listen to the first episode of Cover Story, a new investigative podcast from New York Magazine.
By the Cut
covid-19 Yesterday at 12:07 p.m.
What We Know About the Omicron Variant So Far Experts expect Omicron to be more transmissible than previous strains, but there’s still a lot we don’t know.
By Katie Heaney
ask a boss Yesterday at 12:00 p.m.
‘Should I Give My Boss a Holiday Gift?’ All your questions about holiday gift-giving at work, answered.
By Alison Green
crime Yesterday at 11:30 a.m.
Prosecutors Ask Supreme Court to Review Bill Cosby’s Release In order to “right what we believe is a grievous wrong.”
well well well Yesterday at 11:00 a.m.
What Did the Gucci Family Really Think of House of Gucci? Ridley Scott doesn’t care.
thanks santa Yesterday at 9:30 a.m.
What Are These Pajama Pants For? A cheeky holiday gift from Rihanna to you.
More Stories