Nothing Is More Complicated Than Simplicity

Phoebe Philo and Cristóbal Balenciaga remind us of an eternal fashion truth. 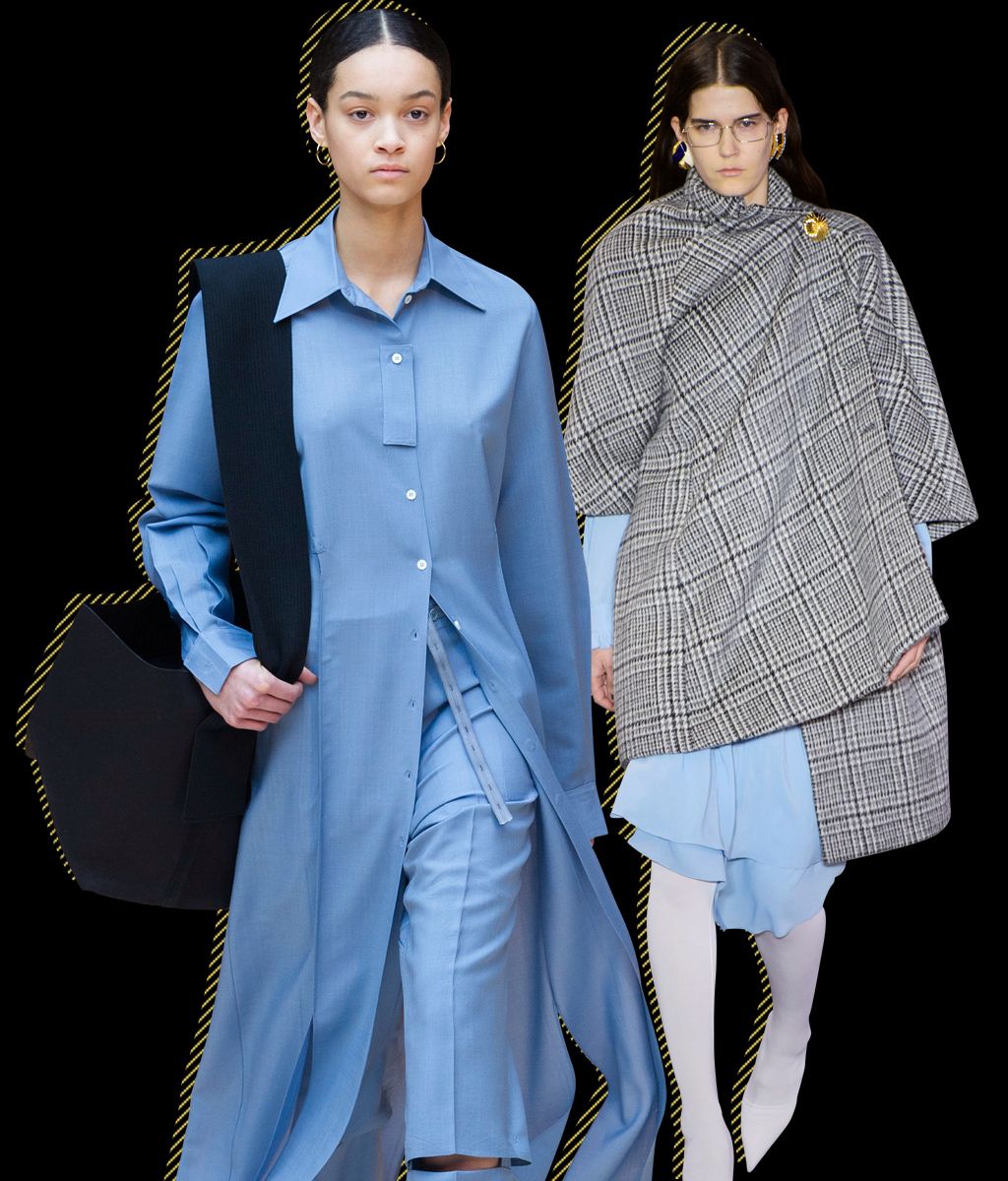 Cristóbal Balenciaga had it easy, as a new exhibition in Paris makes clear. He just had to design clothes that his loyal customers loved to wear. It happened that they loved black — also the theme of the show, “L’Oeuvre au Noir,” at the Musée Bourdelle through July 16 — and they left it to the master to finesse the details and make them the envy of everyone.

Balenciaga didn’t have to consider political protests, or whether he was entertaining the press or capturing life’s anxieties. The idea of taking a garment and making it weird — “twisting” it, in the current parlance — was utterly foreign to him. In every coat and dress on display — in the black-on-black embroidered gowns, in the loose-back dress of the late ‘50s (which might be greatest silhouette in profile in history), you have the sense that he knew when to put his pencil down.

Designers today don’t have that luxury — or is it confidence and control? I doubt they actually design more products per annum than the prolific Balenciaga, but they nonetheless feel they are on a merry-go-round of intense expectation. If they are exceptionally creative, like Phoebe Philo of Céline, they are almost not allowed to do less than they did the previous season. In fact, they must do more.

What — no follow-up to last season’s slim, ultra-chic bag at Céline? Ya mean, this time it’s a pedestrian tote on a fat shoulder strap? And where are the cool shoes that Philo always offers? Sniff. Cowboy boots with sharply angled heels — an editor said they looked like an Ann Demeulemeester style — apparently didn’t cut it with some observers.

Philo’s decision to put her audience yesterday on a series of revolving platforms — acknowledging their role as watchers and critics, without making too much of it — was a timely idea, then. I loved this show: its wit, its game-show silliness (wheee, we’re turning!), its conceptual simplicity. Designed by the artist Philippe Parreno, the platforms were flush with the bare pine runway, so that guests, seated on risers, did not know they were about to turn, much less that they would be part of the show.

The show played out in one slow revolution, with the models coming briskly from all directions. The sense of a busy city street was obvious, and increasingly it became hard to focus on the clothes. I know I saw the same natty black pantsuit and white collared shirt go by at least four times. I picked out the long black scarves, their fringe splashing over boots, and a road-map print on a silk dress. I noticed that the black skirt over skinny pants, with a striped cotton shirt, was actually an apron.

But the rest passed in a blur, and when I looked later online at the collection, some of the clothes — the plain mid-calf dresses, the big shirts — now seemed dull. Then I checked myself: Simple is never as exciting as complicated, but it is a necessary part of most women’s lives. Philo’s turntables weren’t so much a metaphor for a hectic world as for our ambivalent responses to what’s thrown at us. I love it, I hate it. Is it me? In the end, it was the woman at the center of the production — Philo — who seemed calmest about her choices.

By contrast, Demna Gvasalia, the creative director of Balenciaga, staged his show in a massive room, empty except for guest chairs lining the walls. Beige carpeting, printed with the company’s logo, stretched like a repetitive welcome mat to the corners. As Gvasalia said afterward, “I like this emptiness and that it represents every possibility.”

No collection that includes a clutch bag in the shape of a car side mirror or a coat that looks as if the poor wearer has been jerked sideways by her lapels could ever be called narrow. Gvasalia said he got the idea for the coats from archive photos showing models holding garments closed across their chests — when the coats are unbuttoned, he said, they fall in an asymmetrical drape. This is something lots of women do without thinking, but what works as an unconscious gesture looks wonky as a stylized one.

More convincing were masculine shirts with an attached leather piece that puffed out a bit at the back and closed in front with two straps. Worn with slim trousers, it was a sporty take on Balenciaga’s draped back. Also terrific were a spree of couture evening dresses based on styles in the archive, brought up to date with side pockets, new fabrics (in some cases), and huge totes in the same materials, so that bag and gown blended in a cloud of feathers or silk. It was a nice joke.

Gvasalia would be the first to admit that being at Balenciaga is an education, in restraint if nothing else. At the dinner to open the exhibit at the Bourdelle, where curator Olivier Saillard displayed some of the original Balenciagas in tall black boxes, Gvasalia told me that initially he had tried to “twist” the evening dresses to make them more interesting but then realized they were better left alone.

That’s a lesson that probably every designer should heed.

As Saillard said, he conceived the exhibit as “an answer to the world of today. The concentration and obsession of Balenciaga as opposed to the entertainment of colors, shapes, ideas of today.” And black also insists, he said, “on the effort of cut” — without distractions or tricks.

So not easy at all.

Nothing Is More Complicated Than Simplicity

parties! 1:04 p.m.
Selena Gomez, Emily Ratajkowski, and More of the Bestest Party Pics This Week This week: Marc Jacobs’s fall 2022 presentation, NFT parties, and Pride celebrations.
instagram worthy 1:00 p.m.
Expensive Elopements Are the New Dream Wedding The more elaborate — and exclusive — the better.
By Kate Willsky
fashion 12:36 p.m.
Virgil Abloh’s Vision, on Full Display at the Brooklyn Museum We chatted with “Figures of Speech” curator Antwaun Sargent, who worked on the exhibition with Abloh before the designer’s death.
power 12:35 p.m.
Everything to Know About the WNBA Star in Russian Custody Legal experts say Brittney Griner’s trial is likely to end in conviction.
explosions 12:33 p.m.
Goop Candles Continue Their Campaign of Terror in the Hamptons Two men reportedly caught fire in a Sag Harbor Goop store.
gone sale-ing 12:00 p.m.
Your July 4 Sale Shopping Guide That NuFACE you wanted? It’s on sale.
rsvp yes 11:00 a.m.
Winning the Wedding-Season Marathon How guests with fully booked weekends are getting through it all. (Excel, mostly.)
By Emilia Petrarca
the kardashians 10:30 a.m.
I Can’t Shut Up About ‘Krissing’ A TikTok trifecta: Kris Jenner, catchy audio, and being obnoxious.
By Mia Mercado
allegations 10:23 a.m.
All the Allegations Against Ezra Miller In the past few months, the actor has been arrested twice, repeatedly accused of physical assault, and accused of brainwashing a minor.
life after roe 10:14 a.m.
Are Social-Media Platforms Censoring Information About Abortion? Facebook and Instagram have been restricting and removing posts intended to help people seeking reproductive care.
encounter 8:00 a.m.
Becca Tilley Gets Her Rose Coming out to Bachelor Nation wasn’t easy, but it sure felt good.
By Katie Heaney
the grub street diet 6:00 a.m.
Rachel Antonoff Names Her Pies “I’m like, ‘Do you prefer Bob or Judy?’”
By Rachel Sugar
crime Yesterday at 5:58 p.m.
A Mother Pushing a Stroller Was Shot and Killed in Manhattan Investigators say 20-year-old Azsia Johnson was shot at “very close range” while on the Upper East Side Wednesday night.
5 questions with... Yesterday at 4:43 p.m.
Saucy Santana on the Formula for Going Viral Santana makes viral videos in one take. He does so by staying true to himself.
the body politic Yesterday at 4:00 p.m.
The Abortion Stories We Didn’t Tell How decades of silence left us unprepared for the post-Roe fight.
By Rebecca Traister
pride Yesterday at 2:00 p.m.
‘I’m Trying to Focus on the Joy’ Celebrating 20 years of Pride in St. Petersburg amid Florida’s anti-LGBTQ+ crusade.
By Ashley Dye
that's hot Yesterday at 1:19 p.m.
Paris Hilton Has Her Priorities Straight No president is more important than Britney, bitch.
trendspotting Yesterday at 1:00 p.m.
The Bride Who Didn’t Care Meet the too-cool-for-tradition aesthetic.
By Laura Pitcher
power Yesterday at 12:40 p.m.
Ketanji Brown Jackson Is Officially a Supreme Court Justice She was sworn in on Thursday, becoming the first Black woman to ever serve on the bench.
celebrity Yesterday at 12:40 p.m.
The Investigation Into Meghan Markle Bullying Claims Is Over The findings will not be made public.
More Stories