Society’s fascination with shoes has endured centuries. From the first rudimentary foot coverings to today’s street sneakers and couture stilettos, the evolution of footwear has produced a long and diverse history of boundary-pushing, out-there styles from around the world. And the genre continues to innovate: In February, the debut Katy Perry Footwear Collection proved an early 2017 contribution to this lineage of sensational shoes.

The new capsule, designed by the pop-centric singer-songwriter in partnership with Global Brands Group, lives up to Perry’s high-energy aesthetic. Described in a release as “designed for women seeking bold, glamorous style at affordable prices,” the line includes about 40 styles, from heels and sandals to flats and sneakers. Priced at $59 to $299, the sophisticated-kitsch collection is available on the brand’s own site, as well as retailers including Macy’s, Lord & Taylor, Zappos, and Amazon.

Featuring a futuristic celestial motif; bright, Havana-inspired primary colors and floral prints; and pumps and booties nodding to ’90s street culture, the collection builds upon the influence of artful, avant-garde designs from modern and ancient times. To highlight that relationship, the Cut presents a timeline of some of the most dramatic, novel-at-the-time shoe styles throughout history, below. 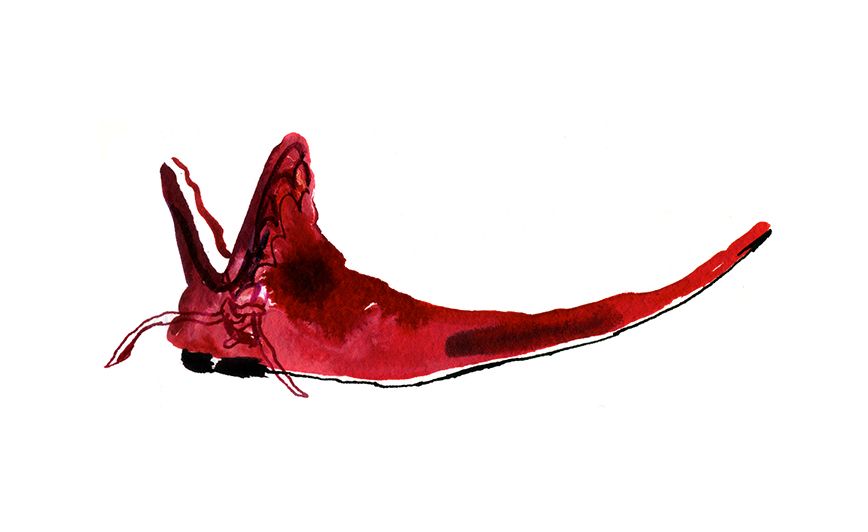 Though these elf-like shoes (also known as “crakows”) may appear impractical, the upper crust of Europe — pairs have been found in England, France, and Poland — wore them casually. The shoe's "beak," the poulaine, was often stuffed with moss to maintain its exaggerated point.

These elongated-toe shoes were the leading fashion footwear of the wealthy and elite in Europe during the late Middle Ages. 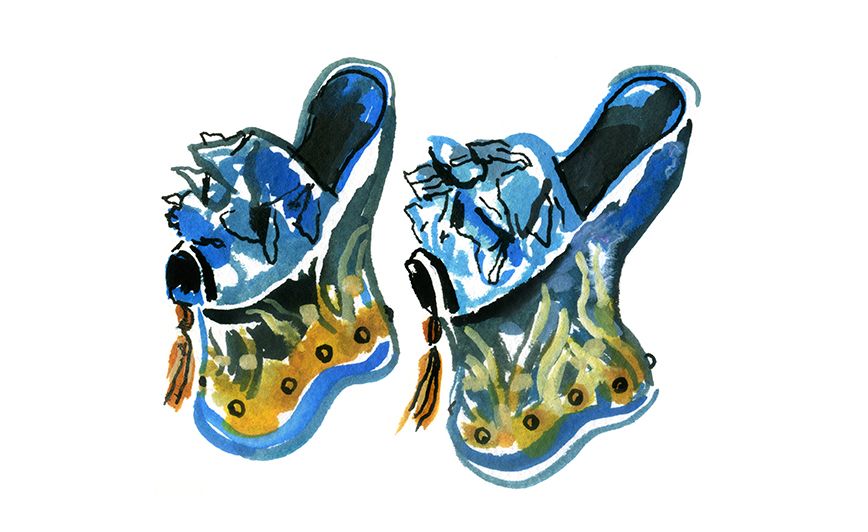 These pillars were worn by the wealthiest European women, with wedge height correlating to social status. These sandals and mules were made from expensive textiles and gems, and weren’t meant to be roughed up. To walk in them, women were often assisted by servants.

High-status women in Venice and areas of Spain wore couture-like platforms, artfully constructed with premium materials like leather and jewels, to show off their wealth in height. 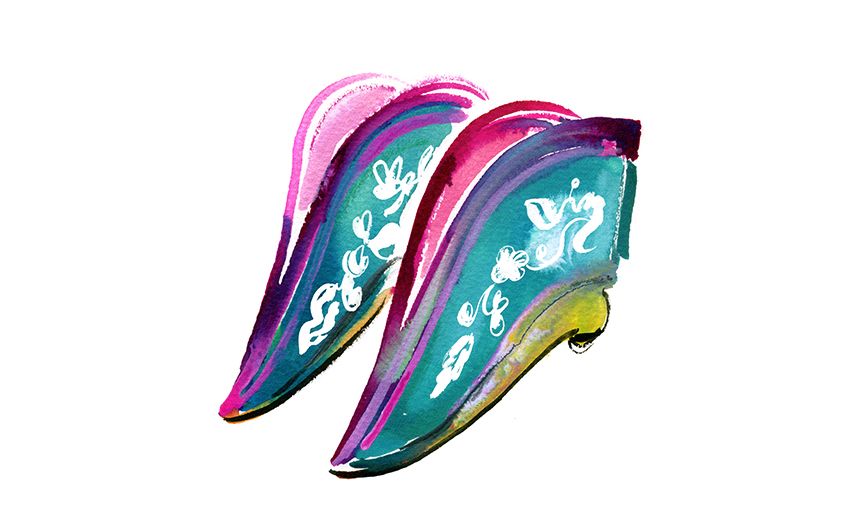 Starting in the mid-10th century, Chinese girls and women notoriously bound their feet into the shape of lotus buds. Their boldly colored silk-and-cotton shoes were usually hand-embroidered with other “lucky” icons like fish, flowers, and Chinese characters.

Chinese royals of the era revered the lotus flower, a symbol of purity and summer, as such good luck that the feet of young girls and women were stunted to fit into these tiny, bud-like shoes. 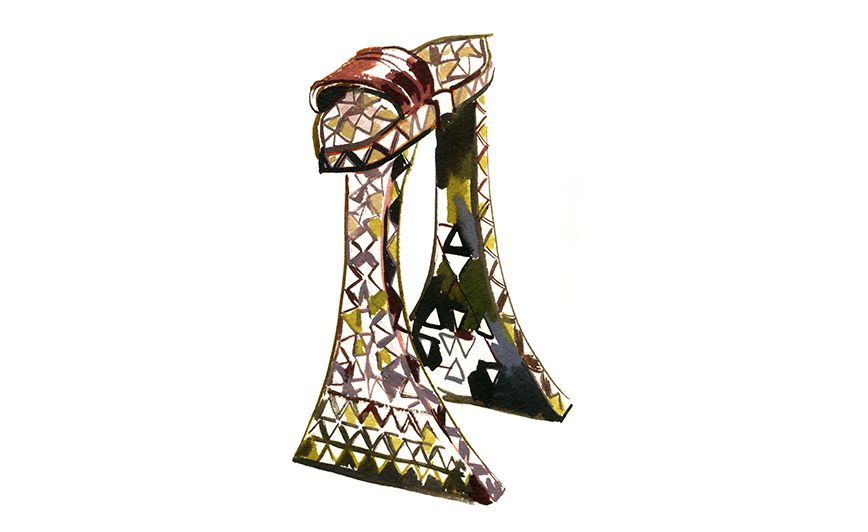 Wealthy Syrian and Turkish women balanced above the dirty ground in kabkabs (named for their clacking sound). Ornate styles were made from silk, leather, and velvet, with gold, silver, and mother of pearl details. Simple wood ones were worn in bathhouses and also by men.

Middle Eastern women elevated themselves in these wooden stilt sandals to protect their feet from muddy streets and steamy bathhouses. 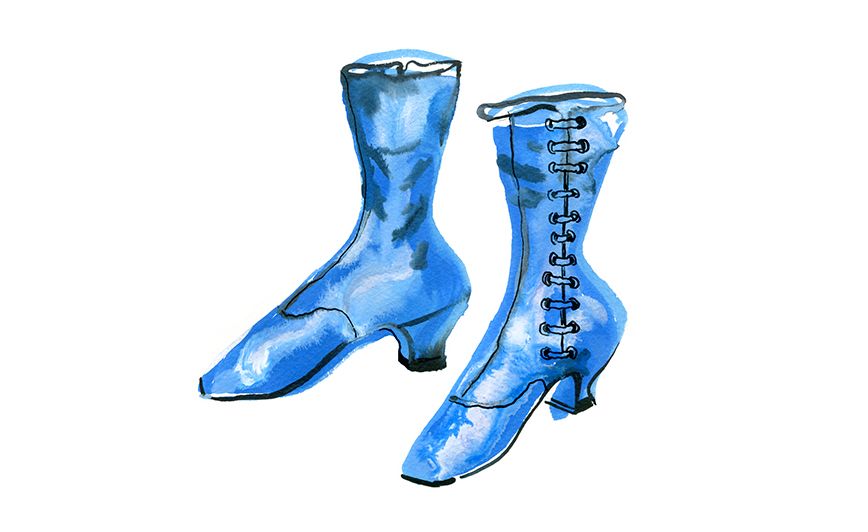 The Victorian era saw the manufacturing of shoes specifically for the left and right feet. Women adopted low-heeled ankle boots made with sturdier materials than before; laces and buttons improved fit, while tassels, ribbons, and dyes feminized the menswear-inspired shoe.

Heeled boots with laces, buttons, and buckles became widely popular for women during Queen Victoria's reign, given their practical structure and better-fitting silhouettes. 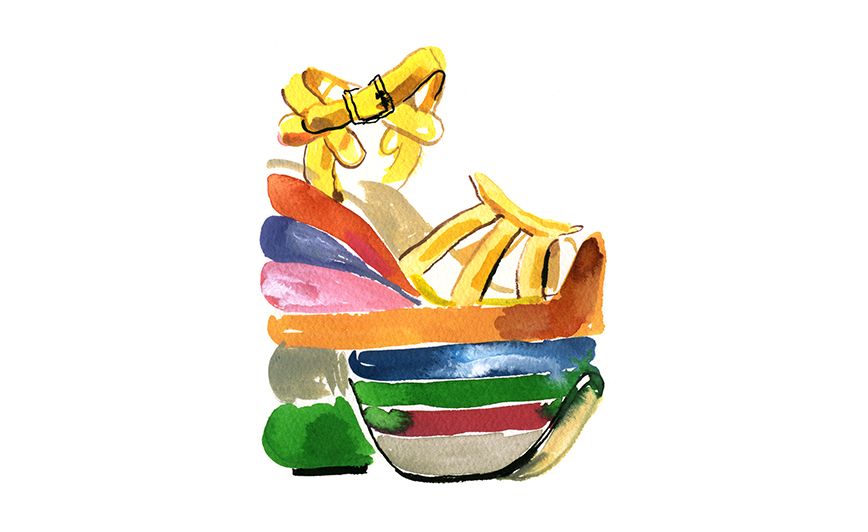 The wedge dates back to ancient Greece, but Ferragamo pioneered the contemporary platform. Faced with a sanction on steel, the shoemaker turned to manageable, lightweight, and affordable cork, cutting radically high — but chic and wearable — shapes.

Due to the wartime steel shortage, Salvatore Ferragamo conceived lightweight platform wedges made from cork and executed in eye-catching style, like this rainbow suede style. 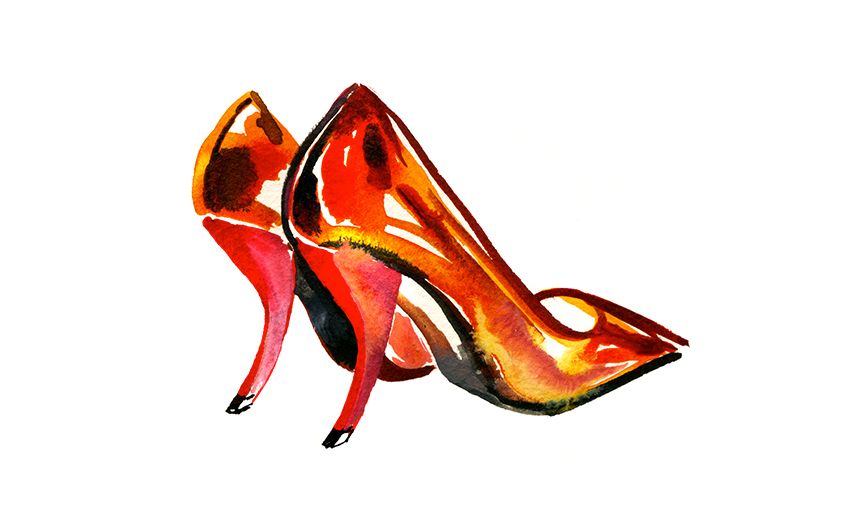 After Roger Vivier professionally separated from Christian Dior, he went on to create his signature Virgule heels, also known as the “comma heel.” The pump's concave back leg, originally designed for Princess Soraya of Iran, gained it respect as exemplary haute couture.

In an unexpected twist, designer Roger Vivier reimagined the classic pointy-toed pump with a cheeky and structurally inventive curved heel. 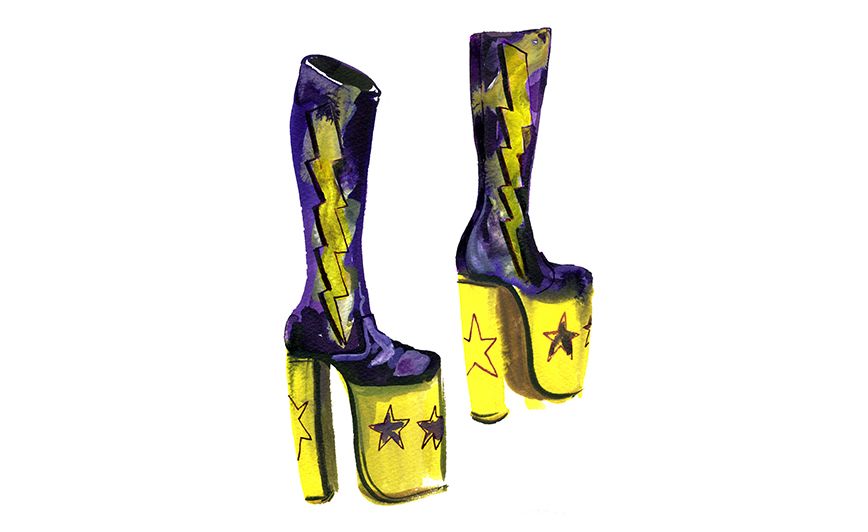 Platform boots were a mainstay of glam rock in the early to mid-1970s. The performative, androgynous dress of acts like David Bowie, Alice Cooper, Elton John, and New York Dolls was completed with tall, tight-fitting boots crafted from metallic leather and glittery embellishment. 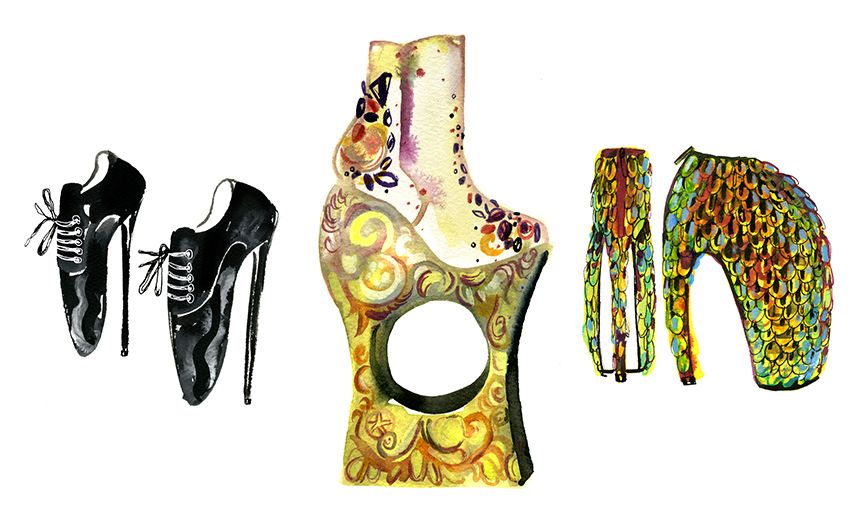 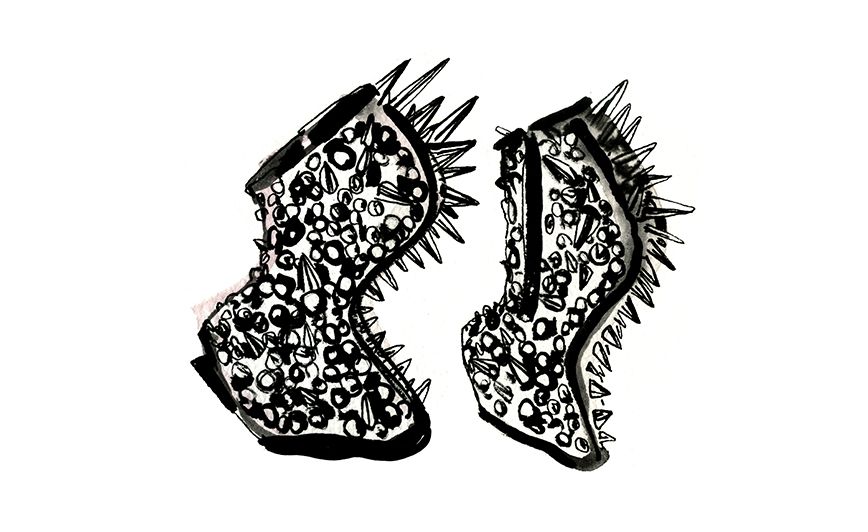 Inspired by cantilever technology, which shifts the wearer’s weight to the front of the foot, these five-inch inverted “gravity shoes” proved deceptively wearable (even by performers like Lady Gaga). Earlier versions appeared in the ’30s, minus the rhinestones and back-heel spikes.

Victoria Beckham and Daphne Guinness were wearing heelless wonders in 2008, but the style propelled into mass market popularity after 2012, when Giuseppe Zanotti and Noritaka Tatehana started producing their own invisible wedges. 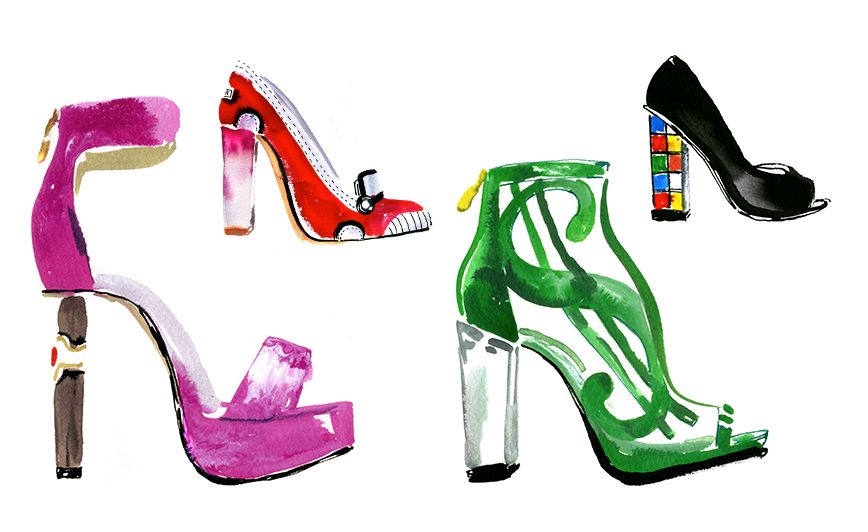 With her penchant for shaking up the fashion scene, Perry has ventured into design. The playful, fashion-forward styles include standouts like lucite block heels and strappy, fruit-adorned stilettos. The statement-makers are the stuff of double-take-worthy style. 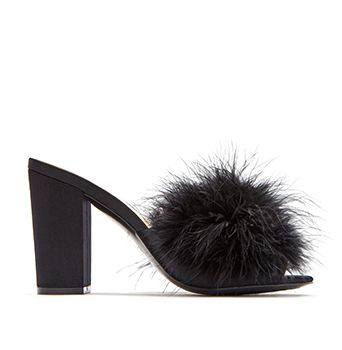 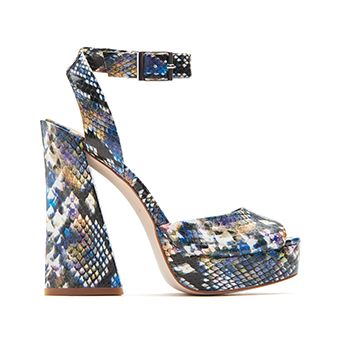 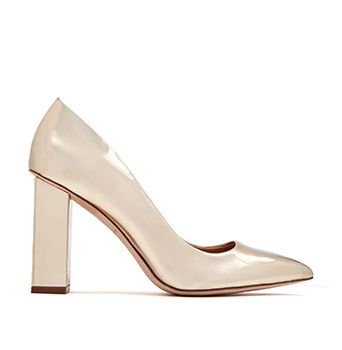 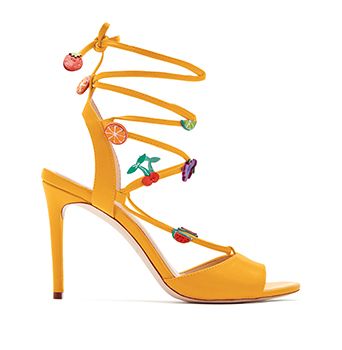 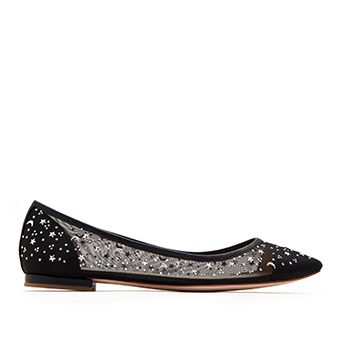 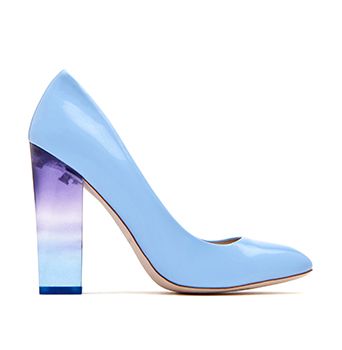 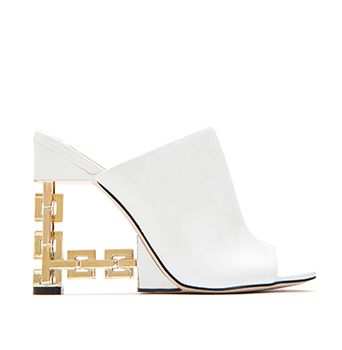 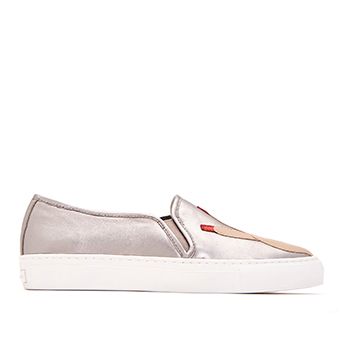 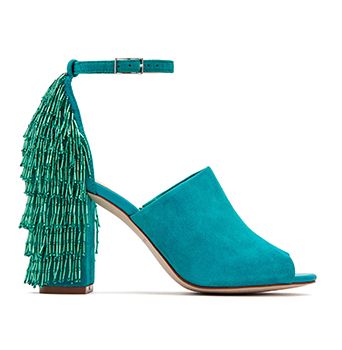 A Visual History of Outrageous Footwear
screen time Jan. 22, 2021
Some Fun Outfit Ideas for Ella Emhoff And a niche Bernie meme you might have missed.
By Emilia Petrarca
niche drama Jan. 22, 2021
What’s All This Drama About a Pro-Trump Parenting Guru? Receipts have surfaced documenting four years of donations from the Taking Cara Babies founder to the MAGA Committee.
a beautiful life Jan. 22, 2021
Ella T. Gorgla Wants More Black Leaders in Beauty And her organization, 25BWB, is going to help them get there.
animals Jan. 22, 2021
Finally, Science Has Allowed Us to Gaze Upon a Dinosaur’s Orifice A paleontologist says the newly discovered dinosaur butthole specimen is “perfect” and “unique.”
2021 inauguration Jan. 22, 2021
Who Will Be the J.Crew of the Biden Administration? Michelle Obama famously embraced the brand in the aughts. Who will get the spotlight now?
next level Jan. 22, 2021
The Melbourne Club Kid Taking Over The NYC Fashion and Art Scene  PR maven Gia Kuan is excited for the future.
By the Cut
drama Jan. 22, 2021
The Bachelorette Breakup Is Getting Incredibly Messy Rumors are swirling that Dale cheated on Clare … and that is just the start of it.
niche drama Jan. 22, 2021
I Know Too Much About This Disney Love Triangle Now The drama started with Olivia Rodrigo’s “drivers license,” and now everyone (allegedly!) involved has released their own song.
celebrity Jan. 22, 2021
We Finally Know What Gigi and Zayn Named Their Baby Apparently, the name is a tribute to Gigi’s paternal grandmother.
friday sales Jan. 22, 2021
15 Things on Sale You’ll Actually Want to Buy: From Adidas to Coola Including lots of cold-weather essentials for the long winter ahead.
dream date Jan. 22, 2021
Bollywood Just Gave Us Our Next Leading Man Hollywood should take note of The White Tiger’s Adarsh Gourav.
By Sangeeta Singh-Kurtz
what?? Jan. 22, 2021
Wait, So Did Jenna Maroney Actually Date the MyPillow Guy? It’s a rumor that sounds right out of 30 Rock.
we tried this Jan. 22, 2021
What’s a Good Lipstick for Working From Home? Testing a popular one from Lisa Eldridge.
the body politic Jan. 22, 2021
America Is Back, Indeed With Biden, we’ve restored our country’s favorite tradition: basic, middling, white patriarchy.
By Rebecca Traister
introductions Jan. 22, 2021
For Rhye, Making an Album Created a Community The singer-songwriter wants people to feel present in his music.
hot bod Jan. 22, 2021
You Just Need One Good Song Ten fitness instructors share their absolute favorite pump-up songs.
the grub street diet Jan. 22, 2021
Sarah Jessica Parker Misses Restaurants So Much It Hurts “One of the greatest gifts in New York is the discovery of everywhere else.”
By Chris Crowley
executive powers Jan. 21, 2021
Did Biden Get Rid of Trump’s Precious Diet Coke Button? Trump would apparently press it in the Oval Office to summon a butler bearing the soft drink on a silver tray.
testing testing Jan. 21, 2021
We Tested 75 (and Counting) Actually Kind of Stylish Fabric Face Masks We checked for fit, comfort, breathability, and how well they block droplets.
let's makeup Jan. 21, 2021
Michelle Obama Was Wearing Fenty Beauty at the Inauguration Her personal makeup artist breaks down the eyes-only look.