In 1927, Georgia O’Keeffe’s first major solo exhibition opened at the Brooklyn Museum; 90 years later, a sweeping survey of her work has now returned to the same institution, with an eclectic mix of materials that includes the artist’s high-school yearbooks, bespoke suits, and Vanity Fair–commissioned illustrations.

Her white silk separates, brimmed gaucho hats, and silver bangles are shown in real life in the next gallery room, displayed on simple mannequins that “don’t try to evoke the person,” as curator Wanda M. Corn told the Cut, but rather act as a “platform for the costume.” O’Keeffe famously wore loosely fitted, black-and-white suit sets with her hair neatly tucked under a headscarf and vaquero hat. She favored V-shaped necklines, mother-of-pearl buttons, kimonos worn with narrow belts instead of the traditional obi, and items without zippers. Some critics have noted that the streamlined silhouette of her body cloaked in drape-y fabric and a close-fitting cap resembles a Constantin Brancusi sculpture.

O’Keeffe was a talented seamstress, who, as was common of many women of her generation, learned how to sew “at her mother’s knee,” as Corn put it. The exhibit draws attention to the garments that O’Keeffe stitched for herself, including several ivory blouses with mandarin collars and austere, monk-like robes. “She’s an artist of distillation,” Corn explained. “She takes something and brings it down to a very purist and minimalist aesthetic. She didn’t do big buttons, ruffles, lace.”

There is a powerful synergy between O’Keeffe’s style and paintings, both of which show profound geographical influences. For the most part the curators tease out this connection loosely, but at points it crystallizes and is made abundantly clear, when garments are neatly juxtaposed with paintings in the same room.

In 1940, when O’Keeffe moved from New York to Ghost Ranch in New Mexico, color crept into both her landscape paintings and wardrobe. On canvas, she painted with mauve, fiery red, and cornflower-blue pigments to illuminate shadowy cliffs and the region’s expansive sky. Though she rarely let professionals to photograph her wearing denim, O’Keeffe had many pairs of Levi’s jeans in her wardrobe. (Based on paint splotches discovered on the jeans in her closet, O’Keeffe is believed to have worn a denim apron and smock while working in her studio.)

“When people read erotic symbols into my paintings, they’re really talking about their own affairs,” O’Keeffe once said. The artist’s work and her abstract floral paintings in particular are often perceived as inherently feminine and explicitly sexual, as if each flower petal, bone divot, and vacuous door frame that appears in her work is a metaphor for female genitalia. Much of this reception can be traced back to her husband’s early writings on her work. As Corn explained, he “overgendered her. He liked to refer to her work as ‘the art that came from the womb.’” Corn hedged this notion with the fact that “it did help launch her career and it did color the reception.” However, it’s also true that “she never wanted to be a woman artist. She wanted to be an artist.”

O’Keeffe was a visionary whose fiercely independent and reclusive lifestyle has had a significant ripple effect on contemporary artists’ practices. In Annie Leibovitz’s series Pilgrimage, for instance, she visited O’Keeffe’s house in Abiquiu, New Mexico, and photographed the adobe walls and patio view that the artist painted. On her motivation to travel to O’Keeffe’s home, Leibovitz said, “Something just hit me about the way she lived. Her frugality … is a reminder that we don’t need much. She had a simple life: she worked every day, grew a vegetable garden and ate well, walking on this land that she was so drawn to. She was the real thing.”

Click ahead to see photos of the artist dressed in her signature black-and-white outfits, as well as O’Keeffe’s vibrant paintings of the Southwestern desert. “Georgia O’Keeffe: Living Modern” will be on view at the Brooklyn Museum until July 23. 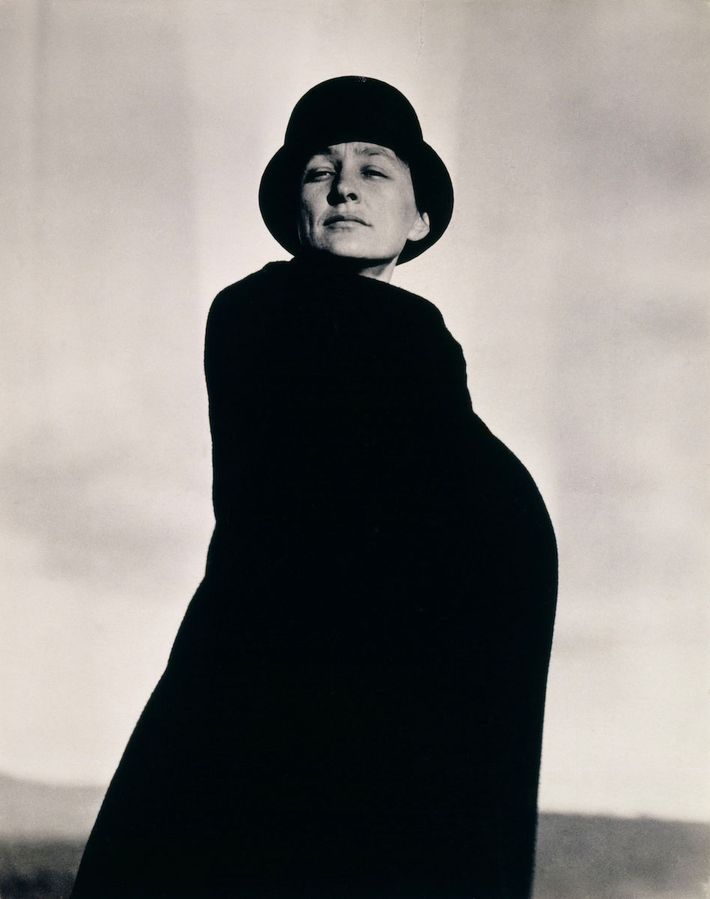 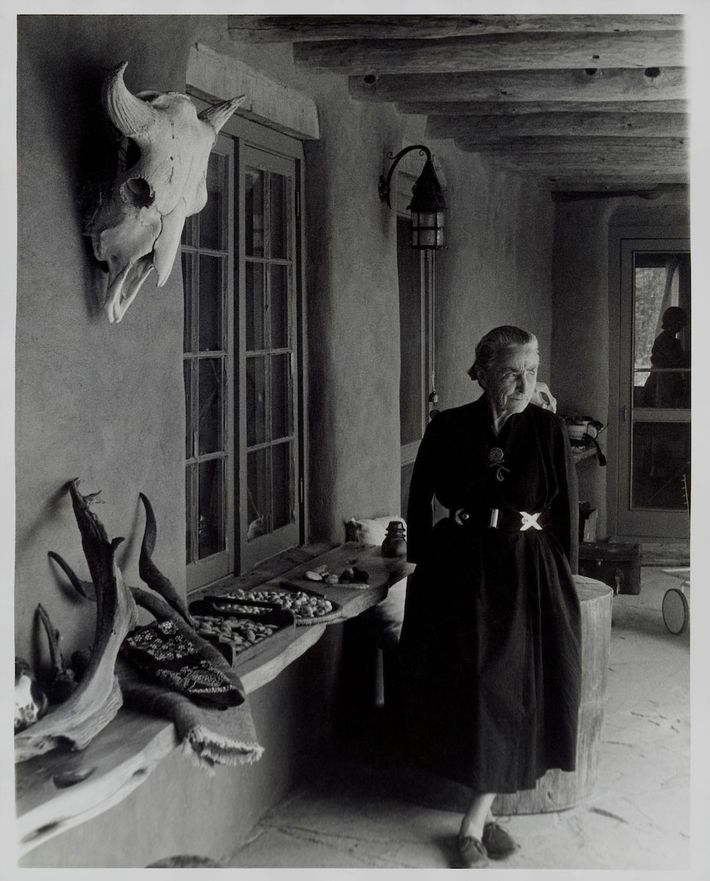 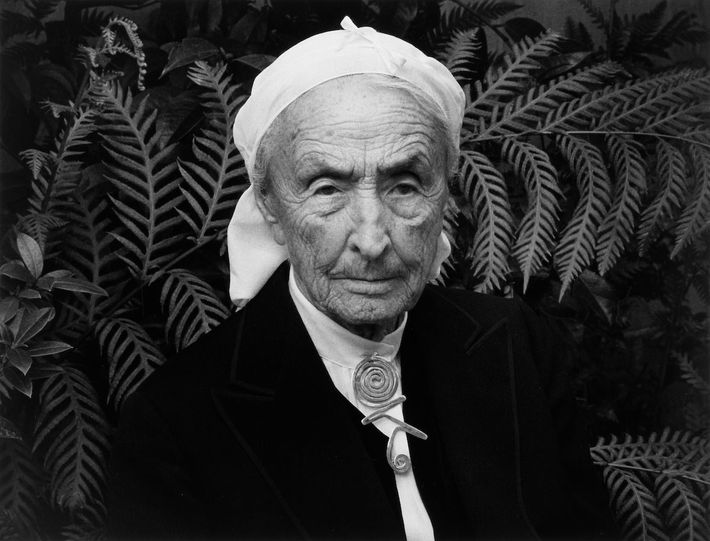 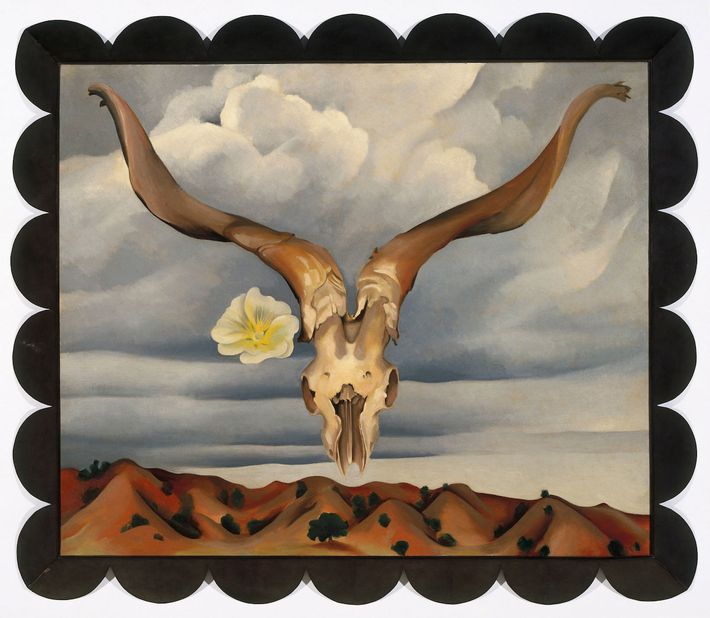 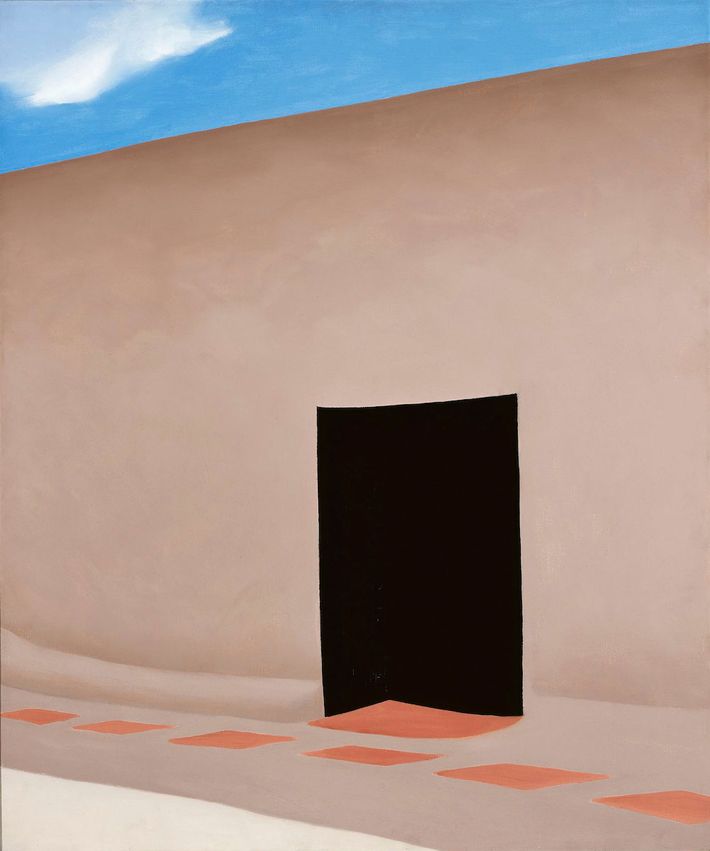