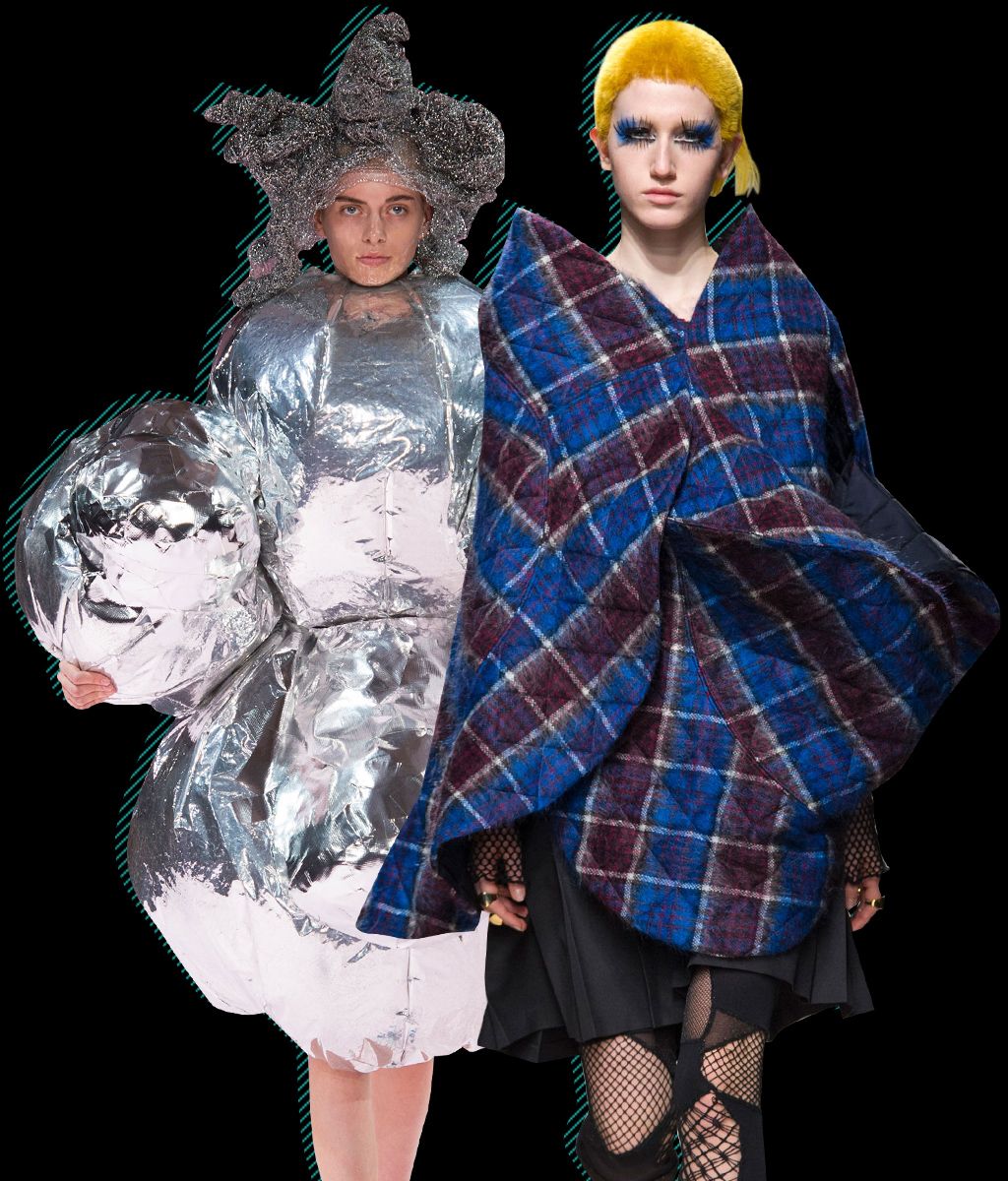 This May, in a major acknowledgment of her art, Rei Kawakubo will participate in a retrospective at the Metropolitan Museum of Art. The thought of Kawakubo at the Met is staggering on a number of levels. She is a living designer, which is a rarity for such an exhibit. Her work over the past 40 years at Comme des Garçons has been controversial and often difficult to explain, but it will not be a surprise if attendance surpasses that of the McQueen exhibition, such is the spectacle of her clothes. When I try to picture the diminutive, frequently unsmiling Kawakubo on the red carpet at the Met gala — dressed, perhaps, as she was dressed yesterday at her fall show, in her standard black motorcycle jacket and black skirt — I see a woman distinctly out of her element, going perhaps against her will.

That’s because Kawakubo’s art has been defined by refusal — refusal to make normal clothes, refusal to play the fashion game, and refusal, above all, to explain herself. She will typically issue an enigmatic phrase — “red is the new black” is the best known. Yesterday, the key words were “the future of silhouette.” For the last several years, Kawakubo has all but given up designing actual clothes — with functioning armholes and so on — and instead focuses on sculptural pieces that vaguely resemble the outline of clothes. It’s almost an admission from the industry’s last living rebel that fashion design, at least for now, has hit a wall and can’t move forward.

However, the beauty of a Kawakubo collection, as I’ve discovered over the years, is that it’s hugely open to interpretation, and at the same time contains threads of thought that can be pulled through, from season to season. She has long been obsessed with silhouette — the foundation of fashion since, more or less, the 12th century, when clothing began to change more frequently and acquire more shape. She’s fascinated by the notion of dresses embedded within a larger dress or a similar form. And she’s really crazy about scale. Her pieces lately have been gigantic.

The primary clue this season was the orientation of the all-pink raised runway. It was set up to suggest a vanishing point — that is, the end of the runway was wider than the start, with the edges representing two parallel lines that would eventually converge. That of course suggested remoteness — Kawakubo’s “future.” The notion of silhouette was conveyed by the first two creamy white shapes: They looked like dress forms based on an exaggerated Kardashian figure. Another clue was Kawakubo’s choice of materials. Instead of fashion fabrics, she used insulation foam, brown packing paper, industrial-strength padding, silver polyester film, and melted black rubber on black nylon mesh.

A person viewing these creations from a distance would have no trouble seeing the outline — or the remains? — of an overcoat or skirt. In previous collections, Kawakubo has masterfully embedded historical dress shapes in her clothes, as if to suggest that the future is present in the ruins of the past.

Naturally, this — and the sheer scale of her creations — raised a lot of questions. Was Kawakubo saying we’re all going to be horribly fat in the future? And not just fat, but wearing our old sofas? Is the consumerist spree that began in the mid-19th century leading inevitably to a world of trash, where so-called luxury products and the stuffing from your FedEx delivery eventually converge?

I don’t know. But I thank the day that fashion produced a woman willing to ask such uncomfortable questions — or, rather, encourage us to ask them. Because it’s not only vision that’s now seriously lacking in the industry; it’s also the power to question our times and beyond.

It doesn’t seem fair to call Junya Watanabe’s collection punk, although the extraordinary shaved and dyed wigs (by Kiyoko Odo) and makeup (Isamaya Ffrench) certainly looked punk, as did the tartan kilts and tattered black tights. Watanabe has taken this particular trip often. He began his career making clothes assembled from fabrics he found in London flea markets. He alluded to that period with loose tops and shifts created from a three-dimensional mélange of leopard prints, black vinyl, brocades, tartans, and tweeds. They almost suggested armor. But, to me, they also subtly referred to French couture shapes that Watanabe has explored in the past. Some of the silhouettes — the sweep of a skirt, the way a tartan piece tumbled on the shoulders — definitely had a classic couture vibe. So this collection was compact with ideas, and proof as well that they can still yield great energy.

meryl streep 2 mins ago
Meryl the Goat Jonah Hill and Jennifer Lawrence called Meryl Streep “the G.O.A.T,” but she thought they meant the animal.
a royal embarrassment 7:06 p.m.
Prince William’s Cringe Moments Are Different From Ours Watch Prince William sing “Livin’ on a Prayer” with Taylor Swift and Jon Bon Jovi.
grief 6:00 p.m.
Nick Cannon’s Youngest Son Dies From Cancer Zen Scott Cannon was five months old.
catching up 5:22 p.m.
So … What Happened on Sex and the City Again? A cheat sheet to where we left off and where And Just Like That … picks up.
5 questions with... 4:39 p.m.
Chatting With WNBA Player Dearica Hamby, the New Face of Jordan On why she sometimes needs to just go into a room by herself and close the door.
health 4:35 p.m.
The Pandemic Has Spiked Our Blood Pressure And the effects of stress could impact our health for years to come.
cover story podcast 4:27 p.m.
That’s an Old Story On this week’s episode, Lily visits the Ecuadoran Amazon to work on a project, and a shaman does something terrible to her.
By the Cut
now open 4:06 p.m.
A New Online Marketplace That Sells Savoir Fare Old Stone Trade, created by the stylist Melissa Ventosa Martin, offers the hard to find.
hot shot 2:40 p.m.
Has Lana Del Rey Entered a New Style Era? Goodbye Maxxinsita period and hello Shein era.
store openings 2:25 p.m.
7 New Stores to Shop at All Holiday Season Mara Hoffman, Parade, and more new stores in New York City.
health 1:53 p.m.
Everything to Know About Rapid Covid Tests At-home tests are (hopefully) about to become a lot more commonplace. Here’s how to use them most effectively.
nightmares 1:20 p.m.
Imagine Sexting Your Dad by Accident Sunday night’s episode of Succession gave us one of the most heinous moments yet.
power 1:17 p.m.
Evan Rachel Wood Says Marilyn Manson Threatened to Harm Her Son In court documents, she claims he also threatened the families of women who came forward with allegations against him.
horny police 12:43 p.m.
Would You Let These Clowns Take Over Your IG? Pete Davidson and Machine Gun Kelly do an underwear ad.
art basel 2021 11:47 a.m.
Judy Chicago Is Tired of The Dinner Party “The girls have their own home now — I’m like, Go and be well.”
By Sangeeta Singh-Kurtz
quiz 10:00 a.m.
What Would Your Selling Sunset Song Sound Like? Figure out your luxury real-estate anthem, you hottie queen boss babes!
#metoo 9:10 a.m.
What We Know About the Disappearance of Peng Shuai After accusing a top Chinese government official of sexual assault, the tennis star’s whereabouts have become the source of international concern.
encounter 8:01 a.m.
At Jamian Juliano-Villani’s New Gallery O’Flaherty’s, ‘Taste Is Out the Door’ The painter and her pals thought the art world had gotten too prissy. “This is the thing. No one’s doing anything cool.”
By Matthew Schneier
advent calendar 2021 8:00 a.m.
Gift of the Day: A Cute, Chunky Claw Clip Give their hair a helping hand.
By Erica Smith
advent calendar 2021 8:00 a.m.
The Cut’s Advent Calendar Gift Guide With a new Cut-approved item every single day.
By the Cut
More Stories