Octopuses and philosophers have a lot in common: They are both given to exploring their worlds, they both have a reputation for peculiarity, they both handle multiple subjects with ease. Peter Godfrey-Smith, a philosopher bred of Sydney, Australia, has long been a scuba diver; his Instagram is populated with starfish, nudibranches, and cowries shot in Nelson Bay and elsewhere off the coast of New South Wales. Now with joint appointments at the CUNY Graduate Center and the University of Sydney, he earned his Ph.D. at the University of California, San Diego, taught at Stanford for more than a decade, and authored four books at the intersection of philosophy and biology, with weighty titles like Complexity and the Function of Mind in Nature, published in 1996, and Darwinian Populations and Natural Selection, released in 2009. His latest book, though thoroughly rigorous, is also readily digestible, and has found itself a fair bit of popular interest — as indicated by Godfrey-Smith’s recent Insta caption: “An octo reacts to the news that Other Minds is a New York Times ‘Editor’s Choice.’”

An octo reacts to the news that Other Minds is a New York Times "Editor's Choice". #fsgbooks #octopus #othermindsbook 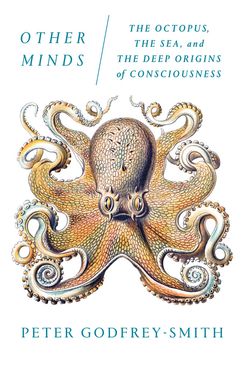 The full title, on its own, prompts a nerd swoon: Other Minds: The Octopus, the Sea, and the Deep Origins of Consciousness. (The cover ain’t bad, either.) Godfrey-Smith tells Science of Us that the insights hidden in his friends the cuttlefish and octopuses were not immediately obvious, but they alighted on him over time. The octopus, he says, is the many-tentacled extension of his earlier work on philosophy of mind, and his studies on the evolution of the mind. Consciousness didn’t just appear in the world in the form of humans; it’s got degrees of expression all over the place. And the octopus, whose last common ancestor with humans was some worm thing from 600 million years ago, has got quite the different mind from ours. “If we can make contact with cephalopods as sentient beings, it is not because of a shared history, not because of kinship, but because evolution built minds twice over,” he has said. With their quick intelligence, penchant for exploration, and strong personalities, there’s something doglike — or humanlike — about these cephalopods, yet they are so different from mammals in so many other ways. To study them is to expand one’s sense of what consciousness is and can be — though it requires rigorous imagination.

Looking back on his earlier work, Godfrey-Smith realized he hadn’t thought carefully enough about relationships in what people call the tree of life and the patterns of common ancestry. “I think a lot of questions about the biological basis of the mind look quite different when you consider carefully the evolution of animal bodies and ways of life,” he explained in an email. “I began meeting cephalopods in the sea before I knew much about them. As soon as I started reading about them, especially about their place in the tree of life, I realized there were important themes here that had not been covered well before.” The octopus provides another view of consciousness; fittingly, their eyes are a lot like ours.

But that’s where the similarities largely stop. After all, these are creatures that, according to Hawaiian creation myth, were the only beings left over from the earth previous to this one, making them, as we’ve noted before, more more proto-terrestrials than extraterrestrials.

The anatomy that enables their consciousness is structured way differently than mammals (or people). In Other Minds, Godfrey-Smith contends that the body-brain dualisms so familiar to cognitive scientists don’t make a lick of sense, cephalopod-wise. “In an octopus, the nervous system as a whole is a more relevant object than the brain: it’s not clear where the brain itself begins and ends, and the nervous system runs all through the body,” he writes.”The octopus is suffused with nervousness; the body is not a separate thing that is controlled by the brain or the nervous system.” It’s easy enough to wrap your mind around the fact that your standard octopus is going to have 500 million neurons or so, about that of a marmoset; what’s more unwieldy is that over half of those neurons are distributed through the tentacles.

This, to me, gets to the wildest thing of all about the octopus. While not exhaustive, experiments indicate that octopus arms are semi-autonomous. (Yours might be too; consider the widely reported phenomenon of pianist fingers “knowing the music” without the player reporting they do, or knowing how to type without explicitly knowing where keys on a QWERTY keyboard are.) That partial autonomy probably results from several factors, Godfrey-Smith explains: “Those arms, which can stretch so readily and can bend so freely, would be very hard things to control in a top-down and fine-grained way,” he says. “It seems possible that this very difficulty was part of what led to a partial delegation of control to the arms: Let them make some of their own decisions about where to go.” Rather than the head being the micromanaging chief executive telling the rest of the body what to do, the octopus is organized more like a chill start-up, with the appendages of the organization employing emergent strategies for exploring their worlds; one might even call it agile design.

No matter how much scuba divers talk about “meeting” octopuses in the way you “meet” a dog or a cat, the animals are immensely foreign. In her book about the creatures, Sy Montgomery wrote that she wanted to meet them because she wanted “to touch an alternate reality.” Godfrey-Smith contends that with the autonomy of the arms and the suffusion of nervousness, the octopus may have a more distributed sense of self, and a lived reality quite different from the phenomenological movie that humans refer to as the experience of consciousness. “I think of this as the most difficult aspect of octopus experience to imagine,” Godfrey-Smith writes. “In the case of some of their other unusual features — their modes of sensing, for example — I think our imaginations can get some purchase on the differences between them and us. (I think I can imagine what it is like to have light-sensitive skin, and to taste everything I touch.) In the case of their sense of self, I think it’s very difficult.” The octopus, more than anything else we’re likely to meet, is an intelligent alien, and an ancient one at that.