An investigation into the joy and pain of fitting in: With this series, we’re exploring the pathologies, hierarchies, and quirks of female socialization from high school to the workplace and beyond.

Since time immemorial, there has been a popular crowd and a corresponding, much larger unpopular crowd in American high schools (and if you don’t think that division exists, then you were probably popular yourself). What better way to delineate the difference between the haves and the have-nots than through fashion? Whether it’s a tiny crocodile on the breast of a polo shirt, a casual-cool velour sweatsuit, or a chain of one-size-fits-most clothing, here’s a look at the signifiers of the high-school halls’ elite over the past three and a half decades.

In 1980, the brand’s signature crocodile polo got a write-up in The Official Preppy Handbook, which called it “the sport shirt of choice.” The miniature croc quickly became a status symbol, and there was even a fad for ripping out the patch, leaving only the embroidery outline behind — the ultimate preppy “in-crowd” emblem.

Recently, Esprit got the ultimate nostalgia stamp of approval: an Opening Ceremony collaboration with the brand. Co-designer Carol Lim had been a fan dating back to the ‘80s, inspired by her school’s own popular clique. “There was a moment when girls at my private school were wearing Esprit. I thought of them as the fun girls,” she told i-D. “I’d come home and tell my mom I needed to go to the mall and get the matching top and bottoms, in fuchsia or maybe cherry print.” The brand was also early to the “real models” trend, casting its own employees and customers in a so-called “Real People Campaign.” 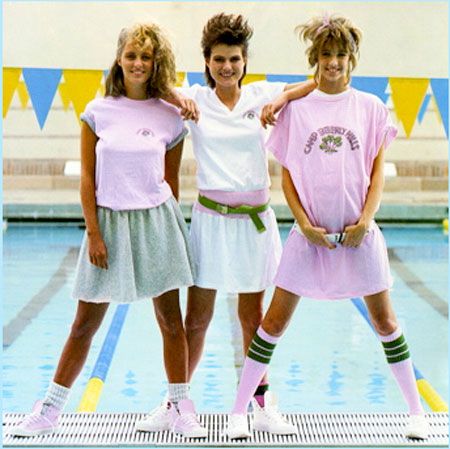 “Sweat clothes are no longer for cleaning out the attic,” declared Howard Himelstein, the co-owner of Camp Beverly Hills, in a 1980 People magazine profile of the store. Just a stone’s throw from Jane Fonda’s workout studio (called, what else, Workout) the store made the neighborhood chic before 90210 or Clueless. Himelstein was also an early evangelist for athleisure: “Sweatsuits in the 1980s will replace the jeans and T-shirts of the 1970s,” he predicted. 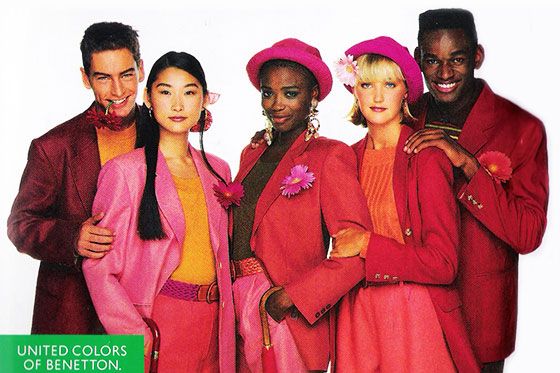 Eighties and ‘90s Benetton is best remembered for its progressive ad campaigns, which brought issues like the AIDS crisis to the fore of fashion discussion. But the clothes were more straightforward Euro-preppy fare, with colorful logo rugby shirts and sweaters ranking among the most popular items.

The #'80s called; they want their women's retail clothing store from the mall back. #ContempoCasuals pic.twitter.com/sETUOsPruC

“In some parts of the universe, maybe not at Contempo Casuals, it’s considered cool to know what’s going on in the world,” said Josh, Cher’s ex-stepbrother-turned-love-interest in Clueless. Regardless of the mall crowd’s awareness of current events, the store itself was definitely cool among teens who loved its ever-changing selection of ‘90s trends. Ultimate cool-‘90s-girl Shirley Manson even wore a Contempo Casuals jacket to the Grammy Awards.

Though it was bought out by Wet Seal and closed in 2001, Contempo’s nostalgic allure has not dimmed: When they were designing Vena Cava, Lisa Mayock and Sophie Buhai even made a zine that paid tribute to the bygone chain.

Not just limited to early-aughts socialites, the comfy velour was de rigueur for any member of a high-school cool clique in the post-Y2K era. Among the onscreen cool kids sporting the Tarzana tuxedo were Lindsay Lohan in Mean Girls and Rachel Bilson on The O.C. Mandy Moore, when interviewed for Vanity Fair’s iconic 2003 “It’s Raining Teens” portfolio about how many she owned, said, “No joke, probably 25.” The Olsens, when posed the same question, said, “A lot — from two years ago, when they were hot.” And that’s how you knew they’d go on to be CFDA winners.

“I like girls who wear Abercrombie & Fitch,” LFO rapped in 1999. So millions of girls followed suit, hoping to attract Rich Cronin by streaming into the dark, cologne-filled stores to pick up logo baby tees and frayed denim miniskirts. A&F drew its fair share of critiques for ads and employment practices that felt exclusionary, but then-CEO of the company, Mike Jeffries, wasn’t too bothered by that image. “Does it exclude people? Absolutely. We are the cool brand,” Jeffries replied.

No relation to the author of Billy Budd, Brandy Melville is a fictitious name that was based on the idea of an American girl (Brandy) falling in love with a British boy (Melville) in Rome. The Italian chain store’s hang tags all read either “small” or “one size.” The practice has raised cries of body-shaming from the Huffington Post, among others, but it hasn’t hurt its cachet among image-conscious teen girls. (In fact, cool teens even serve as the brand’s beta testers. “Product research is made up of all teenage girls,” Kjerstin Skorge, a 16-year-old from Malibu, told Racked. “There’s about 20 of us.”) One teenage girl told HuffPo that in her high school, “You [have] to own something from Brandy, and if you don’t, it’s really weird.” And in high school, it certainly takes courage to stand out as weird.

A Micro-History of Popular-Crowd Brands Over the Years

fashion Yesterday at 8:00 a.m.
The Invention of André Leon Talley The longtime editor worked on shoots, interviews, and fashion pages. But his greatest creation may have been himself.
By Matthew Schneier
in memoriam Jan. 21, 2022
André Leon Talley Turned His Dreams Into Fashion Fantasies From bespoke suits to caftans, his aesthetic symbolized power and grace.
book review Jan. 21, 2022
Jamie Lynn Spears’s Book Is a Sad, Unsettling Read Despite writing extensively about Britney, she never pauses to consider what her life has actually been like.
power Jan. 21, 2022
A Woman Says She Was Groped While Napping on a Plane She says she woke up to another passenger touching her breast mid-flight.
friday sales Jan. 21, 2022
22 Things on Sale You’ll Actually Want to Buy: From Samsonite to Studs Including our favorite lounge shorts for men and the Shiatsu massager that’s “better than my boyfriend.”
we tried this Jan. 21, 2022
Sorry, But I Tried the Bologna Face Mask Feast your eyes upon my meat!
self Jan. 21, 2022
The Couples Code Is sharing phone passwords a sign of a healthy relationship? But what if you really, really don’t want to?
celebrity Jan. 21, 2022
Have Anna Kendrick and Bill Hader Been Secretly Dating? We may have a new unexpected couple on our hands.
abortion Jan. 21, 2022
What’s Next for the Extreme Texas Abortion Ban? The Supreme Court is now walking back on its own ruling, allowing S.B. 8 to stand and rejecting providers’ petitions.
fashion Jan. 21, 2022
My Time With André Knowledge, coupled with his wit and amazing sense of game, should be André Leon Talley’s lasting legacy.
self Jan. 21, 2022
Will We Ever Escape ‘Before’ and ‘After’ Photos? I’m already preparing myself for the deluge of January “weight-loss transformations” on Instagram.
By Alex McElroy
sorry to this man Jan. 20, 2022
That Time Martha Stewart Refused to Date a (Fictional) Cannibal Martha Stewart once dated Anthony Hopkins, but it didn’t last long.
fashion Jan. 20, 2022
Virgil Abloh’s Last Show Louis Vuitton memorialized the late designer for fall/winter 2022.
very online Jan. 20, 2022
Here’s What a Metaverse Rave Is Like, I Guess In fairness, I couldn’t figure out how to make my avatar dance either.
no! Jan. 20, 2022
Let the M&M’s Be Hot and Mean A rude corporate rebrand has decided the M&M’s characters should be … progressive?
celebrity Jan. 20, 2022
Tracing the Ongoing Feud Between Britney and Jamie Lynn Spears Jamie Lynn released private text messages she says she sent Britney in 2020 about the conservatorship.
enough Jan. 20, 2022
What Else Can We Put in Space? Apparently, someone is building a movie studio and sports arena out there.
power Jan. 20, 2022
Working Through the End Days of Roe The staff at the Jackson Women’s Health Organization is too busy to dread what’s very likely to come.
science Jan. 20, 2022
Give Me the Goth Space Diamond Sotheby’s is expected to sell the 555.55-carat black diamond for at least $6.8 million.
my two cents Jan. 20, 2022
‘I Was Harassed at Work. Can I Afford to Sue?’ Taking legal action might be more feasible than you think.
By Charlotte Cowles
More Stories