Death can, for obvious reasons, have a profound impact on social networks. When someone dies, it can cut off ties between people who only knew each other through the decedent, for one thing, and it can cause other relationships to grow closer as members of the network cope with the loss. What’s interesting, and a little bit weird, about life in 2017 is that we can watch some of these dynamics unfold online. Online social networks aren’t identical to offline ones, of course, but researchers do think that in certain important ways they act similarly.

Want to End Bullying? Get the Popular Students to Help
Awareness Is Overrated

In a new research letter published in Nature, William R. Hobbs of UC San Diego and Moira K. Burke, a Facebook researcher, explain the results of a study they conducted geared at better understanding what happens to an online social network after someone dies. To oversimplify a bit, they basically analyzed a very large number of Facebook interactions in different social networks (from anonymized data) before and after the deaths of members. That allowed them to compare the interactions they saw after the death with the interactions they could have expected to have occurred had no death occurred, and it allowed them to break down differences in effects between close friends, acquaintances, and strangers in the same networks.

Summing up their findings, Hobbs and Burke write that, “As expected, a substantial amount of social interaction was lost with the death of a friend. However, friends of the decedent immediately increased interactions with each other and maintained these added interactions for years after the loss.”

It’s an effect nicely summed up by this before-and-after graph — you can ignore the technical language in the caption — in which the vertical line in the middle representing the point in time at which the friend dies. 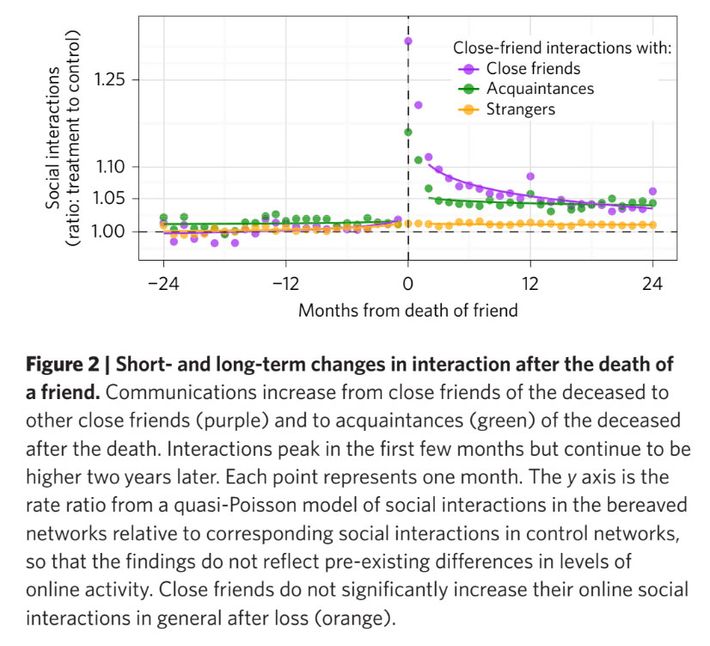 As you can see, the death really does seem to spur an increase in online social interactions in all the groups other than those who were already close friends at the time of the loss — one which lasts for a long time.

Now, there are always going to be limitations to the study of online versus offline networks, and the authors do note that “because we do not have data on offline interactions, we cannot say for certain that social support online reflected increased offline interactions.” But these are still interesting findings, and there is something at least vaguely comforting about the idea of someone’s death bringing people in his or her orbit a bit closer for years to come.

pfw spring 2023 14 mins ago
The Best Street Style at Paris Fashion Week See our favorite looks from outside the shows, from Crocs to head-to-toe Dior.
By Olivia Luppino
celebrity 12:48 p.m.
Trevor Noah And Dua Lipa Sure Look Cozy A source claimed the pair are “just friends” after they were spotted kissing in New York City this week.
society pages Yesterday at 2:36 p.m.
Where Art Thou, Adam Driver? Inside New York Film Festival’s Campari-drenched White Noise party.
By Sangeeta Singh-Kurtz
review Yesterday at 9:47 a.m.
At Loewe, Blurring Reality in a Digital Era Jonathan Anderson questions shape and silhouette in a modern way.
By Cathy Horyn
fashion Yesterday at 9:23 a.m.
How Bella Hadid’s Spray-on Dress Was Made We were just as confused. So we found out.
parties! Sept. 30, 2022
Microdosing Opulence at the Hermès Block Party The Parisian fashion giant celebrated the opening of its new flagship store in New York.
how does it fit? Sept. 30, 2022
We Tried Ganni’s Top-Selling Pieces on 3 Different Bodies Are we #GanniGirls?
society pages Sept. 30, 2022
Martha Stewart and a Big Fish Stopped by the Tin Building Opening Jean-Georges Vongerichten’s South Street Seaport food hall celebrated its opening with a themed culinary funhouse.
q&a Sept. 30, 2022
Hiam Abbass on Playing Ramy’s Matriarch, Maysa We spoke to the Ramy star about the show’s ambitious third season.
fashion Sept. 30, 2022
Is There Trouble Between Anna Wintour and Edward Enninful? A new report from the Daily Beast hints at unrest between the Vogue editor and her protégé.
always shopping Sept. 30, 2022
Winter Gloves to Buy Before It’s Too Late We spoke with experts to get their favorite pairs.
parties! Sept. 30, 2022
Dua Lipa, Amal Clooney, and More of the Bestest Party Pics This Week Some of our favorite looks from the New York Ballet Gala, a Chanel launch, and other glam events.
power Sept. 30, 2022
Protests In Iran Continue Over Death of Mahsa Amini Despite a brutal crackdown, women continue to take to the streets in defiance of government orders.
the most fertile man Sept. 30, 2022
Nick Cannon’s Quest to Populate the Earth Continues Cannon just welcomed his third child with Brittany Bell.
pfw spring 2023 Sept. 30, 2022
At Rick Owens, an Ancient Muse Plus more from Paris Fashion Week, including a new energy at Schiaparelli.
By Cathy Horyn
friday sales Sept. 30, 2022
20 Things on Sale You’ll Actually Want to Buy: From Disney to Neutrogena Including K-beauty must-haves and a great pair of mom jeans
get it together Sept. 30, 2022
7 Light Therapy Lamps to Help With Seasonal Affective Disorder How to use SAD lamps and how they work, according to psychologists.
By Amanda Arnold, Amanda Svachula, and Brooke LaMantia
action item Sept. 30, 2022
How to Help Those Impacted by Hurricane Ian As of Friday, nearly 2 million people in Florida were still without power.
always shopping Sept. 30, 2022
15 Classic Wool Coats Under $400 Because it’s getting cold out there.
By Andrew Nguyen, Devine Blacksher, and Bianca Nieves
health Sept. 30, 2022
The Myth of Adrenal Fatigue The “condition” touted by the wellness industrial complex could explain everything you’re feeling — if only it were real.
By Annaliese Griffin
More Stories