There are few areas of science more rife with misunderstanding than the the study of differences, or lack thereof, between male and female brains. Because this is such a controversial and politically hot subject, it’s been fairly difficult for solid, evidence-based science to participate in the conversation. Some fairly basic questions remain unanswered. But thanks to a big, promising new study, we’re a step closer to knowing these answers.

The study, which is available in preprint form here (meaning it hasn’t yet been peer-reviewed), was co-authored by a team of 18 researchers led by Stuart Ritchie, a postdoctoral researcher in psychology at the University of Edinburgh. The authors sliced and diced data from more than 5,000 people who agreed to have their brains scanned for what’s known as UK Biobank, all of whom were in their 40s, 50s, 60s, and 70s at the time of the scans. According to Ritchie, it is “the biggest ever single study… of sex differences in the human brain.”

Before digging into what they found, it’s worth remembering where we are in this debate. It is, to say the least, a fairly passionate and politicized one. On the one hand are people who claim that hardwired male/female brain differences can explain all sorts of behavioral differences — that women simply are, on average, more nurturing, while men are more aggressive. On the other are those who claim that there’s really no such thing as a “male” or a “female” brain, and that these distinctions have been used to support sexist beliefs and policies.

There was an interesting skirmish in this area last year, when — I’m quoting myself since I summed up this incident in a post from earlier this year — “a Proceedings of the National Academies of Science paper suggesting that male and female brains are functionally identical spread far and wide, held up as evidence that sexed differences in behavior are entirely, or almost entirely, learned. But when a group of researchers went back and re-analyzed the data underpinning that paper, they found that in fact, ‘brain features correctly predicted subjects’ sex about 69–77% of the time.’” People want it to be the case that male and female brains are or aren’t identical, in other words, and sometimes let that desire get in the way of a rigorous examination of the available evidence.

Keeping that in mind, here are three of the key findings from the paper Ritchie and his colleagues just posted:

(1) Yes, there do appear to be many differences between male and female brains, but there’s also tons of overlap. The researchers examined all sorts of potential sites of male/female differences, and found many such differences. But with many of these brain areas, there’s a lot of variation, and a large range of sizes for which it could be safely said that a given brain could be either stereotypically male or female, as this graph shows: 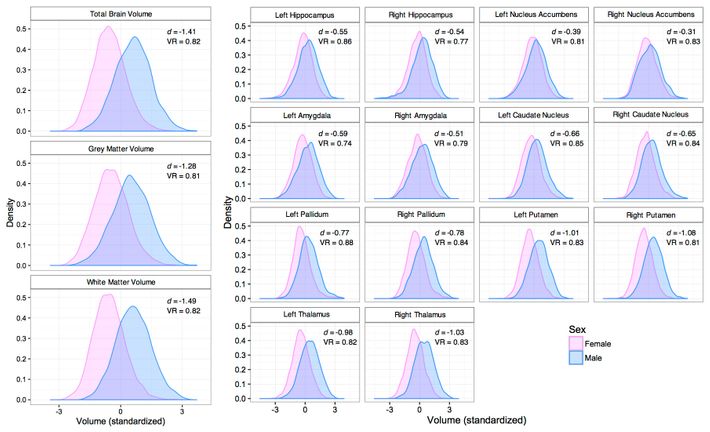 As you can see, the most noteworthy difference was that the men in the sample simply had larger brains in general, which isn’t surprising because men are larger than women, in general. They also tended to have denser brains and more white matter. At the level of individual structures, there were also statistically significant differences, some of them more pronounced than others (it’s probably not worth running down each and every section mentioned, but the amygdalae are two almond-shaped regions that are central to the experience of emotion; the hippocampus does a bunch of stuff, including regulating emotion; and the nucleus accumbens play a key role in “reward circuits” associated with things like food and drugs).

The researchers were curious whether and to what extent these structural differences were simply an extension of men having larger brains in general, since a recent meta-analysis found that structural differences could be explained by the larger overall differences, so they tested for that statistically and found that while the size differences in “the thalamus, the caudate, and the hippocampus” could be explained by the overall size difference, this “was not the case for the amygdala (or the accumbens, pallidum, or putamen).” That is, for those latter structures, there was a size difference even after the researchers controlled for the larger overall size of the male brain.

I was curious about this: Does it matter if a robust size difference between men and women in a given brain structure is driven by the overall size difference? Isn’t a larger structure a larger structure, and either the size difference matters for functional purposes, or it doesn’t? “We had this exact debate while we were writing up the paper,” Ritchie said in an email after I posed the question to him. “It seems to be a knee-jerk reaction to sex differences stuff to say, ‘Did you control for overall size difference?’ but actually I think the absolute question is worthwhile too. It’s definitely interesting to ask this question: ‘Do the male/female size differences in particular areas just reflect something general about how big the brain is, or is there something specific about that area that makes it particularly big/small?’ But it’s also interesting, as you say, to ask: ‘If you just have a bigger [part x of the brain], does that matter, regardless of how large your overall brain is?’” The fact that the researchers themselves aren’t sure which sorts of size differences do and don’t matter should serve as a useful reminder that we’re very early on in our understanding of all this stuff.

(2) These differences could, in the long run, help explain and provide treatment for diseases that tend to hit one sex harder than the other. “As has previously been argued,” the researchers write, “providing a clear characterisation of neurobiological sex differences is a step towards understanding patterns of differential susceptibility to neurodevelopmental disorders such as autism spectrum disorder, a variety of psychiatric conditions, and neurodegenerative disorders such as Alzheimer’s Disease.”

Because the conversation about sex differences in the brain is so politicized, this is a useful thing to emphasize: When this research is farther along, it could lead to some vital medical interventions. Along the way, people should keep keep in mind that there’s huge overlap between male and female brains — just look at the charts above. But it’s in those spaces that don’t overlap where there’s a great deal of potential to ameliorate human suffering. Potentially, at least.

(3) It’s too early to draw any confident causal conclusions from this paper. The obvious question, when it comes to sex-based brain-structure differences, is whether they are the cause of behavioral differences. Differences alone don’t necessarily explain anything: If women are socialized to act differently than men from a very young age, this could lead to different sorts of brain structures, especially in a set of brains whose owners are all middle-aged or older.

In an email, Ritchie said that this paper can’t answer these questions, but is the first step in a process that might eventually yield some insights on this front. “Our manuscript is just about describing the differences, and we can’t say anything about the causes of those differences,” he explained. “As the genetic data comes in from UK Biobank (we should have GWAS data for all 500,000 participants sometime in the next few months, and the brain imaging data, which will eventually have a sample size of 100,000, keeps piling in) we can start thinking about the genetic and environmental causes, but we’re not quite at that stage yet.”

So again: This is the sort of quote that should incite caution among those of us who aren’t researchers. Researchers are trying to figure this stuff out, and if they aren’t yet comfortable making confident statements about how a given brain-size difference can explain real-world behavior, the rest of us should be careful, too. There is, at this point, solid evidence of certain robust differences between adult male and female brains, but it’s just too early to know exactly what those differences mean — or why there’s also so much overlap.

Here’s the Biggest Study Yet on Brain-Based Sex Differences