A few weeks ago, John Mayer told the New York Times that he missed Katy Perry, and had a song on his new album devoted to her. The debut single titled “Still Feel Like Your Man” was mysteriously described as “ancient Japanese R&B,” with a video that resembled a “disco dojo.” In the original interview, Mayer brushes off fears of cultural appropriation, claiming that they were as sensitive as they could possibly be, and that it wouldn’t be inappropriate since “nobody who is white or non-Asian is playing an Asian person.”

The video came out today and, well, John was wrong. There are dancing kung-fu pandas, a bizarre opening sequence that’s a cross between Madame Butterfly, Memoirs of a Geisha, and Kill Bill — and, yes, non-Asians in yellowface. Here are 11 of the most ridiculous moments from “Still Feel Like Your Man.” 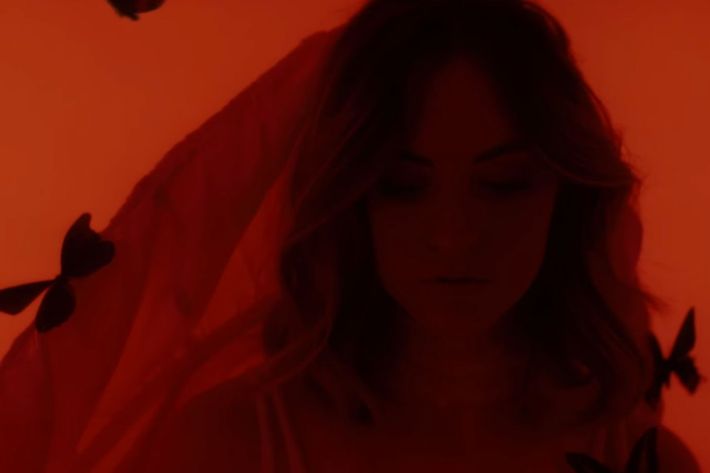 What would any heartbroken video be without a woman to stand in as Mayer’s object of affection? Since it’s “ancient Japanese R&B,” the only choice is to reference Madame Butterfly’s tragic heroine, Cio Cio San, by slapping a veil on a blonde girl and throwing in some butterflies. 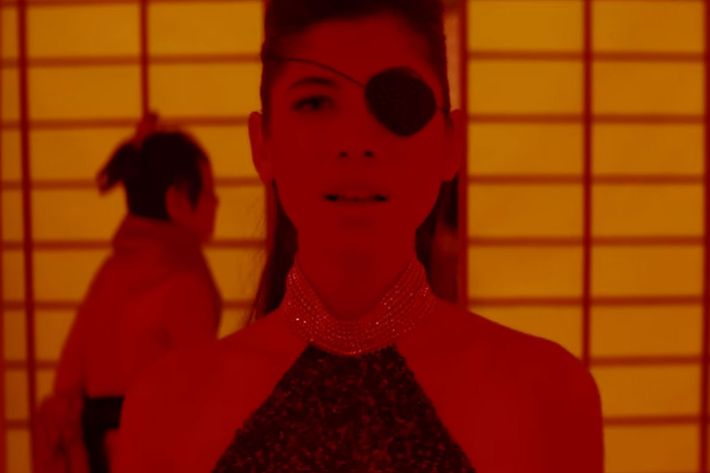 But wait! Mayer totally saw the other important Japanese movies, too, and wants you to know it. The long sweeping shot down a paper-walled hall featuring a stooped grandma-type could be a scene out of Memoirs of a Geisha, while her eye patch is a nod to Kill Bill. Except, not really because copyrights.

3. The Odd Choices in Accessories 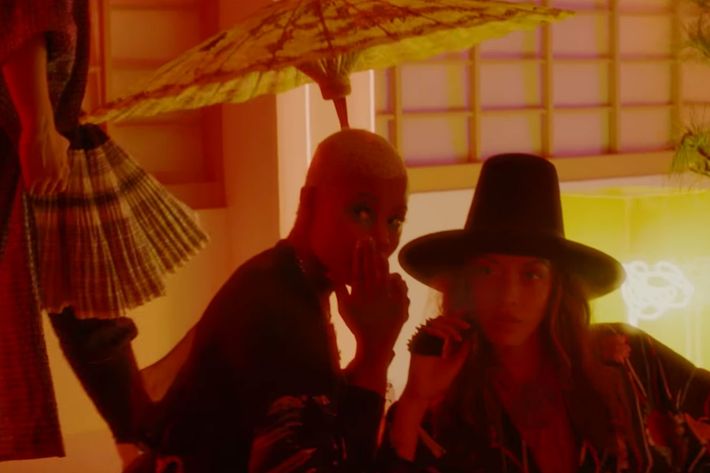 Pssst, your hat is actually Korean.

4. The Angry Asian Woman in the Bird Hat 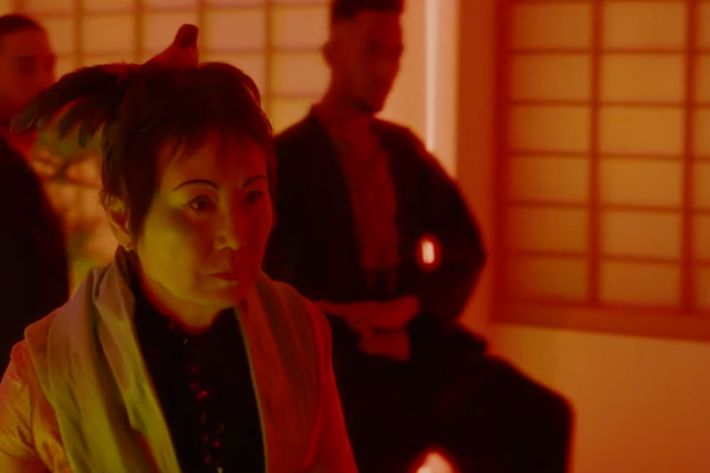 As far as authenticity goes, this woman is the only legit thing in this entire video. She masters the old-lady-shuffle run, wherein an Asian grandma doesn’t need to lift her feet off the floor in order to outrun you to the nearest open subway seat. Plus, her face has the death glare down pat. Though, what is perched on her head remains a mystery. 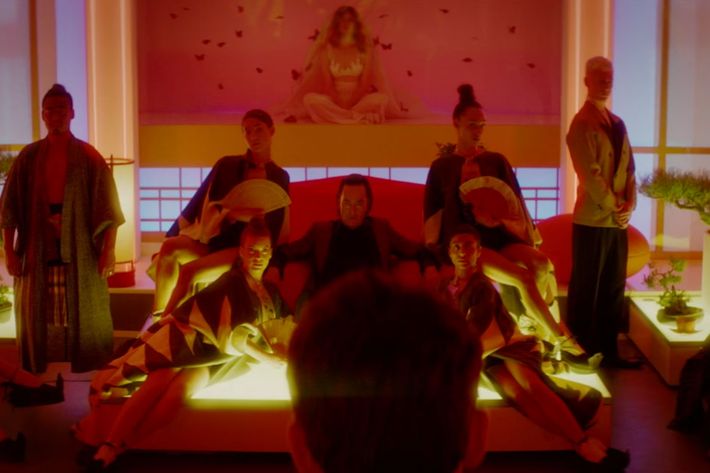 Oh, so the tragic love of his life is being guarded by a stereotypical villain who happens to be surrounded by a malnourished sumo wrestler and a bunch of non-Asians dressed up as geishas? Seems completely appropriate for a disco dojo.

6. The Villain (Who’s Really the Hero) 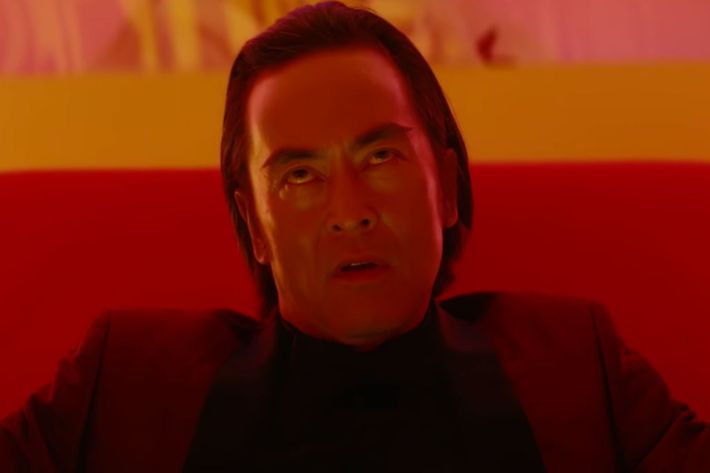 My expression the entire video. 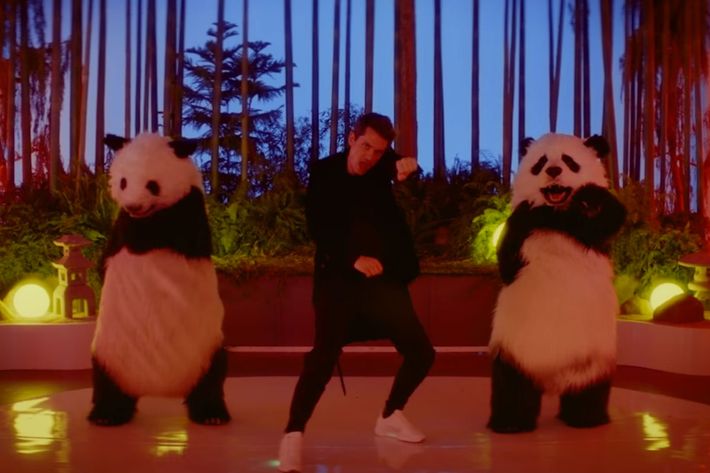 Since it’s a dojo, one must kick and punch accordingly, lest they be punished. And because it’s a video, it must come in dance-sequence form. 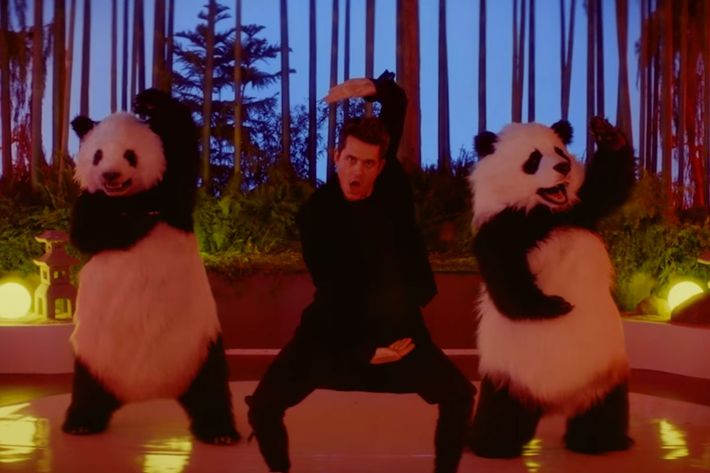 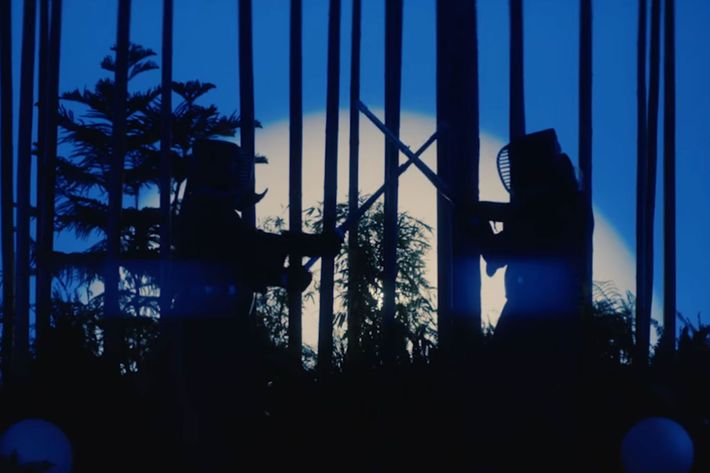 Kendo break, because you need a fight sequence at some point. 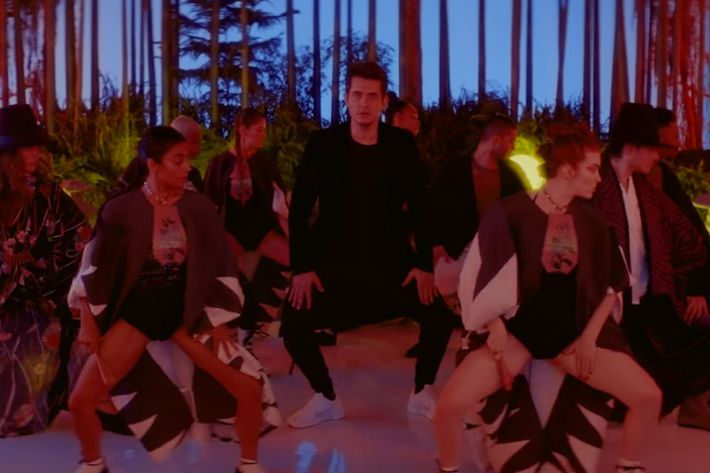 If dancing kung-fu pandas weren’t enough, Mayer proves his worth to his Cio Cio San via an awkward, legs-splayed group-dance routine. At some point, he slaps his legs as if he were the malnourished sumo wrestler. It’s a shame they didn’t actually duke it out clad in the traditional loincloth. 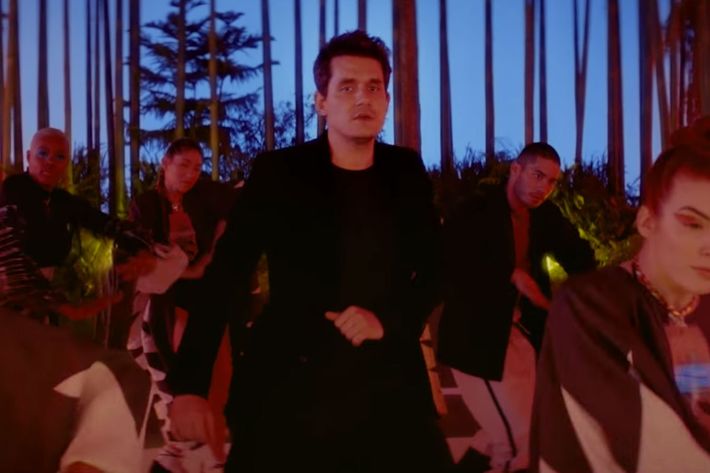 So you’re thinking: Wow, I almost made it through the entire video, and no one has geisha makeup! Then this girl appears, at one point fanning herself in a kimono-esque robe with no pants. Maybe he wasn’t expecting anyone to watch it all the way through?

After all that, it does seem oddly fitting that Mayer would create a Japanese-themed video as an ode to Katy Perry — this is a woman who thought it was completely appropriate to open up the American Music Awards dressed as a geisha. Good luck getting her back, John.

See All
olympics 2021 3:19 p.m.
All the Best Outfits From the Olympic Opening Ceremony From designer gowns to fanny packs.
are u coming? 3:00 p.m.
Raving With Hot Goths in Queens Bushwick meets Bridgerton meets Berghain meets the Baroque.
party pics 2:43 p.m.
The Bestest Party Looks of the Week Including an ingenious way to adapt a suit for 90-degree weather.
friday sales 2:34 p.m.
20 Things on Sale You’ll Actually Want to Buy: From Camper to Crate & Barrel Including a cooling linen quilt and our favorite noise-canceling headphones.
settlements 1:24 p.m.
Mario Batali’s Former Restaurant Group to Pay $600K Sexual-Harassment Settlement An investigation by the office of New York attorney general Letitia James found the business violated city and state human-rights laws.
arson 1:20 p.m.
Did Someone Set Beyoncé’s House on Fire?! A blaze at a New Orleans mansion believed to belong to her and Jay-Z is being investigated as arson.
pictograms 11:55 a.m.
New Sport Alert!!! The human pictograms portion of the opening ceremony is the best part of the Olympics so far.
:') 10:56 a.m.
Mr. Olympics Has Arrived Pita Taufatofua, Tonga’s hunky shirtless flag-bearer, is back to help open the 2020 Tokyo games.
tokyo olympics 10:36 a.m.
What an Eerie Opening Ceremony The Tokyo Olympics kicked off to a mostly empty stadium.
recommendations 10:00 a.m.
The Last Letter From Your Lover Is a Yearn Extravaganza Beware: This movie may make you want to write a letter to your ex​​
fashion 9:00 a.m.
Who Is Lisa, and Why Is She Saying ‘Gah?’ How a store with a gibberish name became a pandemic success story.
¡hola papi! 6:00 a.m.
‘Am I Petty?’ We all have people we don’t like. But you’re letting your enemies live in your brain rent-free.
By J.P. Brammer
tastemakers Yesterday at 6:00 p.m.
The Designer Winning Boxing Championships Nellie Partow is dedicated to strength and empowerment.
power Yesterday at 5:47 p.m.
Washington Post Sued for Gender Discrimination Reporter Felicia Sonmez says she was banned from covering sexual misconduct after going public with her own assault allegations.
olympics Yesterday at 4:58 p.m.
A Breastfeeding Olympian Won’t Bring Her Son to Tokyo The Spanish swimmer expressed her “disappointment and disillusionment” with the Games’ COVID restrictions.
2020 olympics Yesterday at 3:56 p.m.
The Ambivalence Olympics Can you still love the Games with so many reasons to loathe them?
By Claire Lampen
the object of our affection Yesterday at 3:16 p.m.
I’m Obsessed With These Cheeky Metallic Shorts I’ve been seeing them everywhere.
By Asia Milia Ware
culture Yesterday at 2:30 p.m.
What Is This Accent Doing? Nicole Kidman does it again in the Nine Perfect Strangers trailer.
celebrity Yesterday at 1:04 p.m.
Tommy Dorfman Shares That She Is Trans “Today is about clarity: I am a trans woman. My pronouns are she/her. My name is Tommy.”
culture Yesterday at 12:48 p.m.
Anna Faris Secretly Got Married She and Michael Barrett recently eloped in Washington state.
More Stories