By now, you’ve probably heard a lot about just how many millennials are living with their parents. It feels like every few months, some new milestone on this front is reached — in May, for example, Drake Baer wrote about how according to Pew, for the first time ever, more young Americans are living with their parents than with their long-term partners. Now, a new report just released by the Census Bureau entitled “The Changing Economics and Demographics of Young Adulthood: 1975–2016” shows that this trend really has reached some eyebrow-arching heights.

As the title suggests, the report is actually about the changing values and habits of young Americans over the years in general, not just the housing issue, and the accompanying tip sheet has some interesting highlights. For example, “Most of today’s Americans believe that educational and economic accomplishments are extremely important milestones of adulthood. In contrast, marriage and parenthood rank low: over half of Americans believe that marrying and having children are not very important in order to become an adult.” There’s also been a striking decline in the percentage of young woman who are homemakers — the share “fell from 43 percent to 14 percent of all women ages 25 to 34.”

But the housing situation really is what stands out the most: 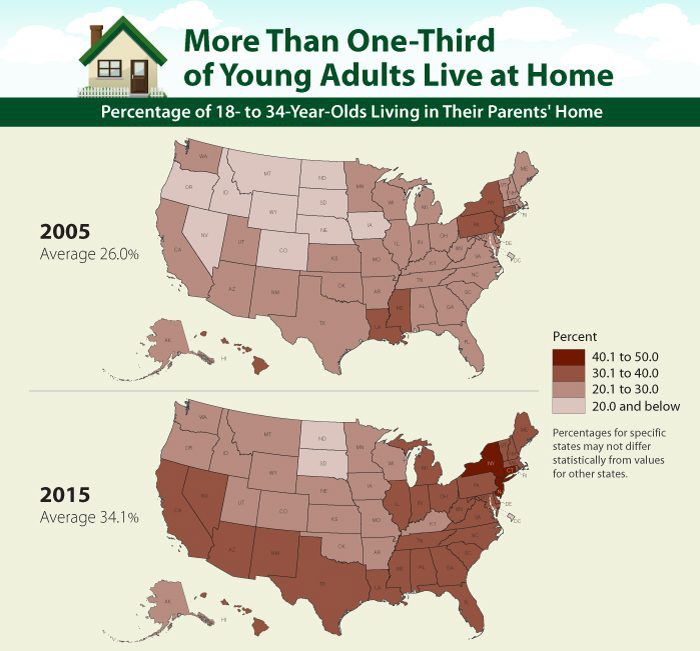 More than a third of Americans aged 18–34 were living at home in 2015 — an 8-percentage-point increase (read: a huge increase) over the situation in 2000. What prompted this increase? The most obvious answer is the Great Recession, but things are actually more complicated than that, as this graph from Pew shows: 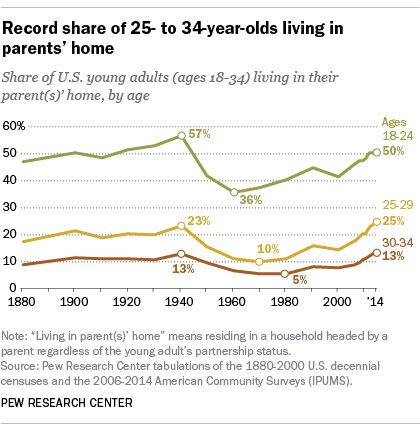 This trend dates back, in all young-adult age-groups, to around the turn of the millennium. So obviously some, or maybe even a lot, of what’s going on can be chalked up to the 2008 collapse, but not all of it. We’re a decade and a half into a rather epochal change with regard to young people’s lives and living arrangements, and it’s unlikely to think it will be slowing down anytime soon.

It’s now totally normal, in big chunks of the country, for people well into their 20s and even their 30s to be living at home with their parents. And most of these young people living at home do not fit layabout or burnout stereotypes — the Census Bureau notes that only one in four is not employed or in education, and this number includes those who are caring for a child. The vast majority of millennials living at home are working or in school, actively trying to carve out a better, more independent life for themselves.

As they work to do so, this trend is going to have all sorts of impossible-to-predict societal effects, many of which will be too subtle to allow for their easy capture in survey data. What it means to be a young person in America is changing in fascinating ways.

So Many Millennials Are Living at Home, But Aren’t Burnouts