At this point, you’re probably aware that a lot of the information you consume on the internet is filtered in some way or another. Google and Facebook, for example, have algorithms that attempt to figure out what sort of stuff you like (and are therefore most likely to click on), which affects which sorts of search results and news-feed items you see.

Telling People to Be Less Racist Online Works, Sometimes
Maybe There’s Some Hope for Political Fact-checking After All

This has worried people for a long time. If we’re only served up stuff we like, could it mean that the internet is increasingly massaging our ideological and other biases, rather than challenging them? If so, it would mean one of the big hopes people had for the internet — that it would operate as a market in which the “best” ideas somehow won out — was being squandered, that instead people were being effectively herded into homogeneous ideological neighborhoods. (Eli Pariser’s 2011 book The Filter Bubble sparked a big conversation about these fears and attached a clever name to them.)

Over the years, researchers have done a fair amount of research showing that people do prefer to read stuff that lines up with their worldviews, and often don’t do a great job seeking out information that could challenge, rather than confirm, their preexisting theories. But as a team led by Ivan Dylko write in a new paper in Computers in Human Behavior, there’s actually a dearth of empirical experimental evidence showing what these sorts of filters do, and comparing internet users’ behavior with and without them. So Dylko and his colleagues ran one.

Then, the researchers simply recorded the users’ behavior over the five minutes they were allotted on the website (that amount of time was chosen, they write, because other research has shown it’s about how much time people spend on political websites in a given session). Here’s what they found (you can ignore the “aggregated customizability group”): 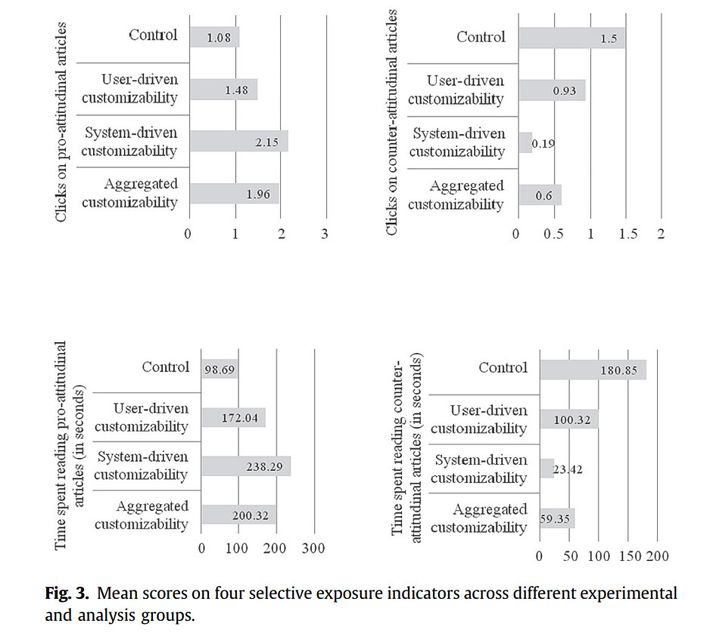 As you can see, filtering of either sort led people to click and spend more time on “pro-attitudinal” articles — that is, articles most likely to reflect their own opinions right back at them. In a way, the bottom-right graph is the most interesting. It shows that people in the control group spent more than half their time on the site reading articles that challenged their beliefs. That number plummeted precipitously in the other conditions.

Now, this is just one experiment based on just five minutes of web browsing, but these are still striking numbers. And, in the case of the most plugged-in news consumers, it’s worrisome to imagine what happens when their propensity for pro-attitudinal content is constantly reinforced by Facebook and Google and Twitter and their network of ideologically like-minded friends. The way we’re siloing ourselves is not good.

Your Customized News Feed Could Be Making You Dumber

life after roe 12:39 a.m.
‘Get in the Streets and Stay in the Streets!’ Abortion-rights protesters channel their rage in Washington Square Park.
By Sarah Jones
life after roe Yesterday at 7:01 p.m.
Overturning Roe Is Just the Beginning Conservatives are already floating a national abortion ban and the overthrow of other privacy-based rights.
self Yesterday at 6:36 p.m.
Eating Daily Harvest Lentil Crumbles Sent Them To The ER Daily Harvest customers describe the medical hell that followed eating French Lentil + Leek Crumbles.
abortion Yesterday at 6:00 p.m.
Celebrities, Activists, and Politicians React to the End of Roe The Supreme Court’s Dobbs decision has, as expected, overturned our constitutional right to abortion.
life after roe Yesterday at 5:30 p.m.
What to Know About Stocking Up on the Abortion Pill Even if you aren’t pregnant, some providers will let you buy the medication in advance.
life after roe Yesterday at 4:49 p.m.
God Help My Friendship With White Evangelicals After Dobbs Forced reproduction cannot mean anything other than slavery to Black women.
By Brittney Cooper
life after roe Yesterday at 3:58 p.m.
The Necessity of Hope Things are bad. They will get worse. But despair has never been an option.
By Rebecca Traister
life after roe Yesterday at 3:57 p.m.
With Roe Gone, This Abortion Clinic Is Running Out of Time “We were all just crying and angry. Then the phone rang and I had to make an appointment with a patient.”
life after roe Yesterday at 1:34 p.m.
How to Protest for Abortion Rights Following the SCOTUS Dobbs decision overturning Roe v. Wade, demonstrators are making their voices heard.
abortion Yesterday at 1:08 p.m.
The End of Abortion As We Knew It In a 6–3 decision, the Supreme Court has ruled to overturn Roe v. Wade.
By Irin Carmon
the internet Yesterday at 12:00 p.m.
Can a PDF Really Tell You If You’re Queer? Unpacking the complicated legacy — and history — of The Lesbian Masterdoc.
By Michelle Santiago Cortés
life after roe Yesterday at 11:16 a.m.
‘A Woman Has No Rights’: Read Liberals’ Supreme Court Abortion Dissent Justices Breyer, Sotomayor, and Kagan decried the abolition of Roe v. Wade in blistering language.
life after roe Yesterday at 10:55 a.m.
Find an Abortion An exhaustive guide to the clinics still open in each state, how to reach them, and the services they offer.
By the Cut
abortion Yesterday at 10:44 a.m.
Life After Roe Starts Now The Supreme Court decision ensures a health-care crisis that will ripple out across the country.
By Claire Lampen
power Yesterday at 10:30 a.m.
Donate to an Abortion Fund Right Now If you’re terrified about the overturning of Roe v. Wade, it’s the best thing you can do.
By Bridget Read and Claire Lampen
style Yesterday at 8:00 a.m.
The Rise of Fashion’s Tumblr Generation They found themselves, and each other, online.
keeping up with the royals June 23, 2022
Prince William and Kate Middleton’s Portrait Is Making Me Uncomfortable Sex and the City shoes included.
allegations June 23, 2022
All the Allegations Against Ezra Miller A man claims Miller is housing his young children and their mother in unsafe conditions.
good boys June 23, 2022
Congratulations to These Wrinkles Trumpet the bloodhound is the first of his breed to win Best in Show.
public health June 23, 2022
The FDA Just Changed Vape Life for Good R.I.P. Juul — for now.
More Stories