On Monday, Robert M. Pirsig, author of Zen and the Art of Motorcycle Maintenance and Lila died at his home in South Berwick, Maine. He was 88. Though he wrote only those two books, each will be remembered as classics of modern philosophy. For the uninitiated, the main thread underlying both books is something called Quality, a word Pirsig capitalized to indicate that it represents a unique type of event. It’s when a subject and object (or actor and act) become so intertwined that they are hard to separate; they become one. Out of that relationship, wrote Pirsig, emerges a special kind of Quality: “Working on a motorcycle, working well, caring, is to become a part of the process, to achieve an inner peace of mind.”

For Pirsig, being intimately engaged in the process of something was the goal. For example, what makes a sculpture have Quality? It isn’t the stone, and it’s not the sculptor. It’s what happens between them, out of which the sculpture emerges. “Between the subject and the object lies the value,” he notes in Lila. “This value is more immediate, more directly sensed, than any ‘self’ or ‘object’ to which it might be later assigned.” The more Quality involved in the process, the more beautiful the result.

Even though he authored more than 850 pages about it, Pirsig struggled to define Quality. 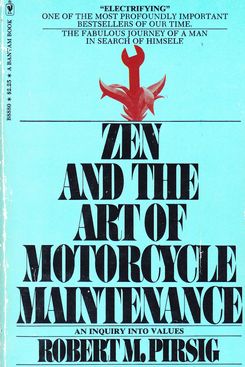 Pirsig is not the only one to have trouble defining the word. Avedis Donabedian is considered the founding father of the study of (lowercase) quality in health care, an academic field that has spawned government agencies. And yet even he couldn’t quite get his arms around it. Perhaps the closest he came was on his deathbed in 2001, when he told a journalist that we’ll never really be able to define or measure the essence of quality. “Ultimately, the secret of quality is love,” Donabedian said. Maybe that’s what Pirsig — with his Quality — was saying, too.

Almost immediately following the news of Pirsig’s death, knowing how big a fan of his I am, my closest family and friends suggested I write something about him. I told them the best way to honor Pirsig is to read his work, because no one can say it better than he did. So I’ll leave you with another of my favorite quotes. “To live for some future goal is shallow,” he writes in Zen and the Art of Motorcycle Maintenance. “It’s the sides of the mountain that sustain life, not the top … The only Zen you find on the top of the mountains is the Zen you bring up there.”

Brad Stulberg writes about health and the science of human performance. He’s a co-author of the new book Peak Performance: Elevate Your Game, Avoid Burnout, and Thrive with the New Science of Success. Follow him on Twitter @Bstulberg.

Big Goals Can Backfire. Olympians Show Us What to Focus on Instead.

Zen and the Art of Quality