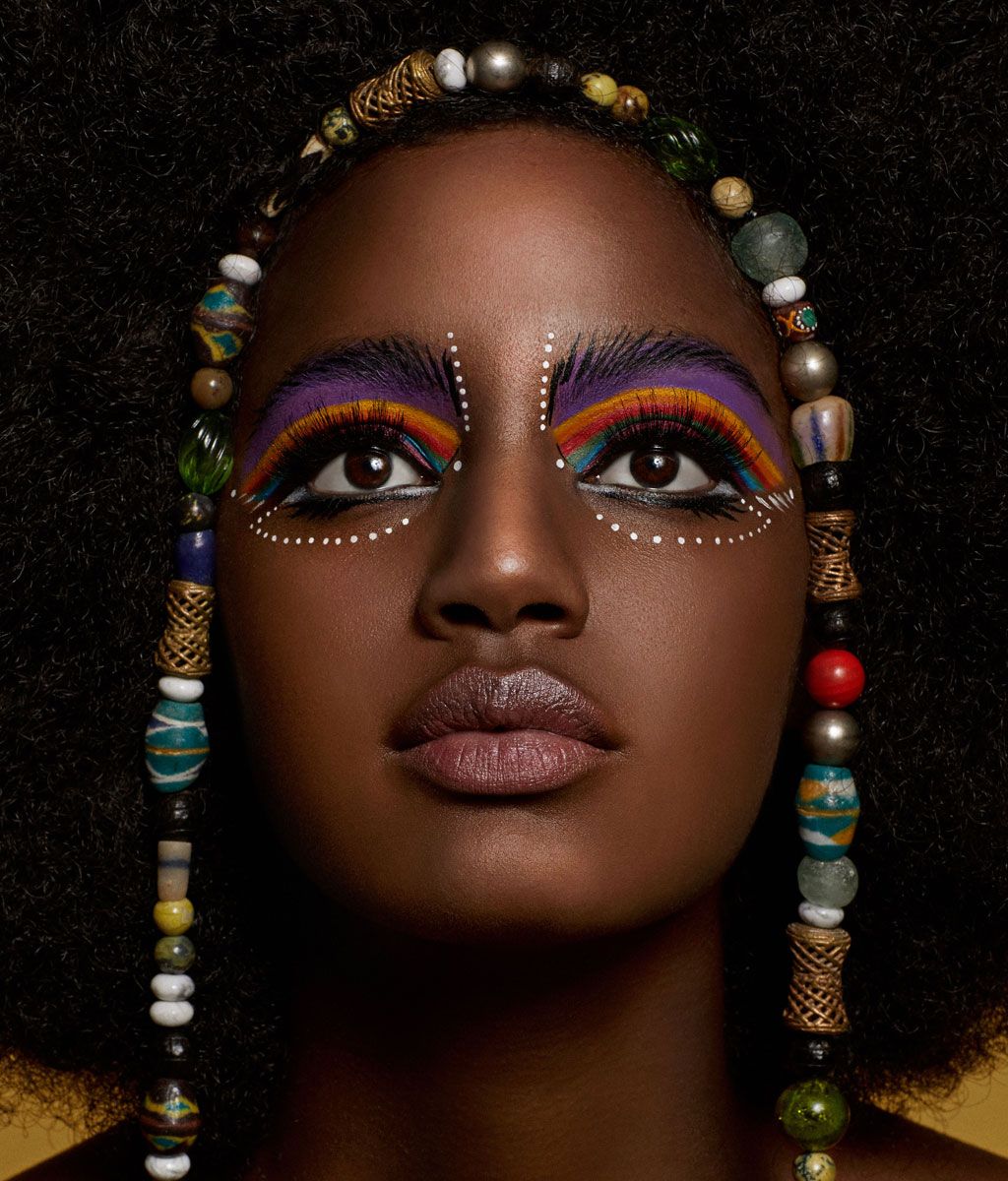 You may recognize Ebonee Davis’s beautiful brown skin from last year’s Calvin Klein billboards, or its recent underwear campaign. Or perhaps you saw her at Yeezy Season 4, or when she appeared in the Adidas Originals “We the Future” Campaign. But this model isn’t content with beaming down from a billboard in silence. She wants you to hear her point of view on everything from systemic racism to appropriation in fashion.

A year ago Davis took her emerging power as a public face and published an evocative, impactful, honest open letter in Harper’s Bazaar’s July 2016 issue. In it she told of being insulted by modeling agents, how she learned to accept her natural hair, and how she first saw herself as part of Calvin Klein’s fall 2016 campaign the same day that Alton Sterling died. Her TED Talk from February 2017, titled “Black Girl Magic in the Fashion Industry” has over 49,000 views and counting.

Davis says she always knew she wanted to be a model. After moving to New York from Seattle at 19 years old with only $800 in her bank account, she was able to book low-paying jobs to make ends meet, recalling, “I remember my tax returns the first year of living in New York, I only made $13,000, but I was determined!” Things started to pick up for her career after she shot with Sports Illustrated in February 2016, but just as she was gaining steam she decided to make a big change that most black models aren’t brave enough to do: demanding to wear her natural hair. “Not wearing my natural hair took a toll on my self-esteem — straight hair was the example of beauty growing up, as a model I had white agents with no knowledge of black hair care, and by the time I got signed I felt like something was wrong with me. I was willing to compromise my authenticity just to get a foot in the door. I always thought natural hair was beautiful I just didn’t know I could be natural. One day I just decided to go for it, and taking pride in my hair became a catalyst for taking pride in my blackness.”

The shift in work was immediate because she no longer conformed to the industry’s standards and decided to make her own rules, taking her career into her own hands. Soon after, she joined Lions agency, in favor of a place that would allow her to be herself after years of being told not to work for black publications like Essence and Ebony and censoring her thoughts about racism. “I needed an agency that was willing to work with me as a person not just as model. The extrajudicial killing of black men and women prompted me to be more vocal about racism in the fashion industry because both police brutality and exclusion stems from the same system of oppression. Inclusion may be having a moment right now, but what happens when being inclusive isn’t on trend anymore? For change to endure, inclusion has to go beyond cool, beyond just hiring models of color; it has to be more than reactionary response to what’s happening in our society and politics, and making room for people of color on all levels.”

Are things even getting better on the runway? Are casting agents and brands truly committed to including different kinds of women? Davis has spent all her life thinking that blackness was inferior and whiteness superior from the lens of high fashion. She explains her own awakening as, “unlearning and building from the ground up.” In this photo series she pays homage to iconic, majestic images of black women like Nina Simone, Iman, Tina Turner, and more who were (and still are) unapologetic in embodying black excellence.

2020 debates Yesterday at 11:57 p.m.
Trump Refuses to Condemn White Supremacists When explicitly, repeatedly asked to do so at the first presidential debate, he said nothing.
2020 debates Yesterday at 11:16 p.m.
That Debate Was Unwatchable Donald Trump just enjoyed a cool 90 minutes of unmitigated lie-spreading.
power Yesterday at 6:52 p.m.
Anyone Else Feel Sick? The spectacle of a Trump debate and the dread it now evokes.
retail Yesterday at 5:03 p.m.
Nordstrom Will No Longer Sell Fur and Exotic-Animal Skins It’s the first U.S. retailer to ban the latter.
the cut opinion pages Yesterday at 4:24 p.m.
There Is Only One Acceptable Way to Reboot The Craft One woman’s opinion.
why is your skin so good Yesterday at 2:55 p.m.
How This TikTok Star Gets Her Skin So Good Brittany Xavier’s tightly edited routine was inspired by a skin cleanse.
culture Yesterday at 2:24 p.m.
Movies Seen Alone in New York City, Reviewed A diary of a former pastime.
creative class Yesterday at 2:19 p.m.
Condola Rashad on How to Find Your Voice  The singer/actress talks about her creative path.
By
covers Yesterday at 2:08 p.m.
Vogue Brasil Knows the Freaking Vibes The magazine put two drag queens on its covers for the first time in Vogue history.
pfw spring 2021 Yesterday at 1:53 p.m.
Jonathan Anderson Isn’t Afraid to Lose Control The British designer thinks it might be good for us to clear the dust.
By Cathy Horyn
health Yesterday at 12:58 p.m.
Queer People Are Way More Likely to Suffer From Migraines Tell me something I didn’t know.
coronavirus Yesterday at 12:55 p.m.
What’s Going on With School Reopenings? As many schools try to resume in-person classes, we’re seeing more and more Covid outbreaks.
friendship Yesterday at 12:30 p.m.
The Dream of Winterizing Your Social Life It’s not too late to get started.
By Maggie Lange
ask a boss Yesterday at 12:00 p.m.
‘Should I Warn Job Candidates About How Bad My Company Is?’ Imagine if someone assured you a job was fine, and then after accepting it, you found out they knew it was a nightmare.
tv Yesterday at 11:55 a.m.
Finally, a Clear Look at The Crown’s Princess Diana The season-four ‘first look’ photos are here.
shopping Yesterday at 11:24 a.m.
Yet Another Reason to Want Crocs Bad Bunny designed glow-in-the-dark slip-ons for the brand.
power Yesterday at 10:34 a.m.
Only One Officer Was Charged in Breonna Taylor’s Killing A member of the grand jury claims they were never given the option to indict the other two officers.
By Bridget Read
ask a cool person Yesterday at 10:20 a.m.
What Are the Best Plus-Size Coats and Jackets? Including the size-inclusive trench that gives Burberry a run for its money.
health Yesterday at 9:50 a.m.
An NYC Wedding With Nearly 300 Guests Was Raided by Police The raid comes amid reports that NYC’s COVID rates are sneaking back up.
pfw spring 2021 Yesterday at 8:20 a.m.
Watch the Dior Runway Show Livestream  Enjoy!
More Stories