To a certain approximation, awareness is overrated: That is, as a general rule, educating people about problems in the world is unlikely to nudge their behavior or their views all that significantly. But there are exceptions to that rule, and one of the more interesting classes of exceptions occurs when there’s a big, high-profile event that focuses a lot of media attention on a particular problem.

John Ayers, a San Diego State University computational epidemiologist with a behavioral-science bent, has done a lot of work with his colleagues studying the effects of these events on Google search terms. One such example came in November 2015, when Charlie Sheen announced on the Today show that he was HIV-positive, and that the treatment he had received for the virus had rendered it undetectable in his blood. It was one of those media events that focused a huge amount of attention on one public figure and one very important public-health issue.

And it left a behavioral mark — at least on Google. A few months later, in a JAMA Internal Medicine study that Science of Us covered, Ayers and his colleagues found that Sheen’s announcement appeared to have caused a massive uptick in Google searches pertaining to HIV testing and condoms. As I noted at the time, such a search spike suggested, but didn’t prove on its own, that Sheen’s high-profile interview may have saved some lives by leading some people to change their behavior: “The big question, of course, is what percentage of these searches will lead to action — to the querier getting tested or having safer sex.”

That’s what Ayers and his colleagues sought to find out for a new study just published in Prevention Science. Rather than just examine search-term volume, the researchers looked at sales data for OraQuick, which is apparently the only rapid-result HIV testing kit available in the United States. 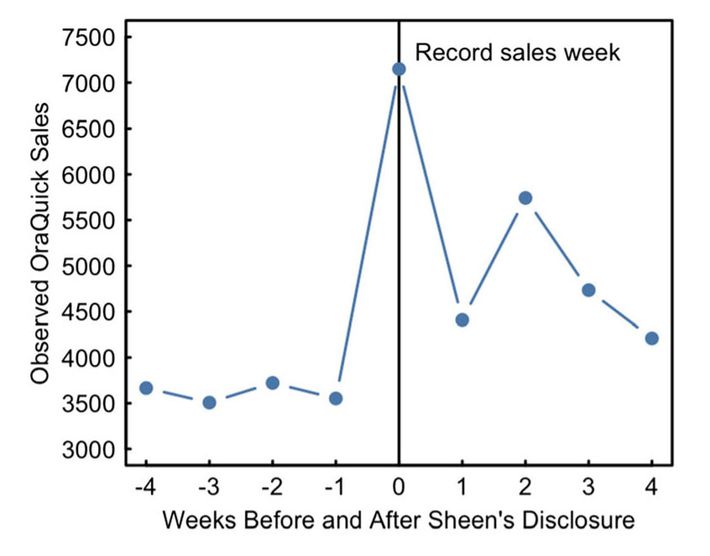 That’s a big jump. And it lends a lot of credence to the idea that some high-profile events really can cause massive, albeit probably temporary, changes in behavior — sometimes, as in this case, life-saving ones. So maybe it’s time for a parenthetical addendum: Awareness is overrated (usually).