What Happens Between Before and After

A rarely seen side of plastic surgery.

“I’ve been interested in the way women’s outside relates to their inside,” says the photographer Lauren Greenfield. To that end, Greenfield has spent time over the past 20 years documenting plastic-surgery patients in operating rooms and recovery centers. Her work shows the very literal insides — the blood and tissue — exposed in cosmetic surgery, where skin is peeled away from muscle, where tubes drain fluid from beltlike incisions below the waist, where faces are scarlet, swollen, crusted, oozing. “The first time I felt a little sick was when I put down the camera and was watching a face-lift,” she says. “The face is so important and symbolic. It was hard to see it pulled off.”

The photographs are among those collected in Greenfield’s new book, Generation Wealth (an exhibition of the same name is on view now in L.A., and will open at New York’s International Center of Photography on September 22). They capture a side of plastic surgery that’s remained mostly unseen and little discussed, even as plastic surgery in general has become much less private. The medical reality they depict is a graphic reminder of what patients are willing to endure in pursuit of a magical transformation. Of course, “if you saw brain surgery or abdomen surgery, you wouldn’t like it,” says Dr. Robert Kotler, who specializes in facial cosmetic surgery in Beverly Hills. But “it’s healthier for patients not to be surprised.”

The leap from wrinkles to general anesthesia can seem unfathomable to anyone who hasn’t made it. Yet more and more do. Figures from the American Society for Aesthetic Plastic Surgery show the number of procedures climbing across the board since the late ’90s. Nonsurgical interventions (like Botox, lasers, and fillers), meanwhile, have become routine. But rather than replacing face-lifts — which remain “the gold standard” — they serve to “complement, enhance, temporize,” explains Dr. Alan Matarasso, a plastic surgeon in New York. “The general thinking is that these patients have bought into the process,” says Dr. Steven Teitelbaum, a Santa Monica plastic surgeon, “and that they will progress to surgery when their desires surpass the capabilities of these modalities.”

It’s tempting to dismiss such choices as extreme, but Greenfield regards her subjects with sympathy. “It’s sad because you see the necessity, an almost desperate necessity, to hold on to the things that give women value,” she says. “I think these choices are rational given the values of the culture.” And Greenfield herself got a glimpse of their experience while visiting a dermatologist for a non-cosmetic issue: He quickly offered her Botox.

“I didn’t even know I had wrinkles,” she says. “Right there, he created a problem that didn’t exist. It’s like realizing you’re naked in the Garden of Eden.”

“I think if I knew everything about it, I might not have gone through with it.”

Marilyn was 63 when she turned to Dr. Kotler back in 1998. “I just found I was very unhappy with the way I looked,” she told Greenfield at the time. “The lines at the side of my mouth started several years ago, but recently they became deeper. They made me look like I was kind of frowning. It made me very depressed. If something bothers you that much and you can do something about it, why not?”

She received a chemical peel, a procedure that few doctors perform because of the extensive training it requires. For such a procedure, the patient is sedated, and then her face is bathed in a formula of phenol, croton oil, Septisol, and “good old tap water,” says Dr. Kotler. The chemicals erode layers of skin, removing brown spots and wrinkles, and as the burned skin peels off, new skin cells are regenerated to replace the old ones. Essentially, the chemicals turn the face into an open wound. “The treatment is the management of burns. And it looks like hell,” Dr. Kotler says. “But everybody gets through it. I wouldn’t do it on my wife if it wasn’t tolerable. And she looked very good at our daughter’s wedding.”

After the procedure, Marilyn’s face was raw and swollen. “I had to pry open one eye with my fingers so I could see how to get out of bed,” she told Greenfield. “I looked like something out of a horror movie. I think if I knew everything about it, I might not have gone through with it. But sometimes it’s better to be a little dumb.”

Lindsey was 18 when she got a nose job, but she’d wanted one since she was 12. “My friends started getting plastic surgery during my freshman year of high school,” she told Greenfield. “By the time I was a senior, I had friends who had had everything from nose jobs to breast enlargements to breast reductions and liposuction. Out of my ten close friends, six of us got something done.”

“When I was in my 20s, people would always ask me if I was a model”

Sydelle was 53 when she made an appointment with Dr. Matarasso in 1998. “The first thing I became aware of was the skin on my neck,” she told Greenfield at the time. “Then I started to see the eyes. I looked tired all the time.” For women who’ve relied on their looks for affirmation and power, aging can mean a loss of identity and even self-worth. “This is going to sound very vain, but I’ve had the experience of walking into a room and heads would turn,” Sydelle told Greenfield. “When I was in my 20s, people would always ask me if I was a model. And then it got to, ‘Did you model?’ It was in the past tense. Now they don’t even ask me that. In American culture, unless you’re young, thin, and beautiful, you’re discarded. You’re not going to get the best table, you’re not going to get the best treatment.”

Dr. Matarasso performed a face-, neck-, and eyelid-lift and treated the lines around her eyes and mouth with a laser. Today, he says his approach to a patient with similar issues would likely be different: He’d add volume to the face by injecting it with fat or fillers in addition to removing excess skin and lifting the tissues and muscles. Recovery time would be shorter. 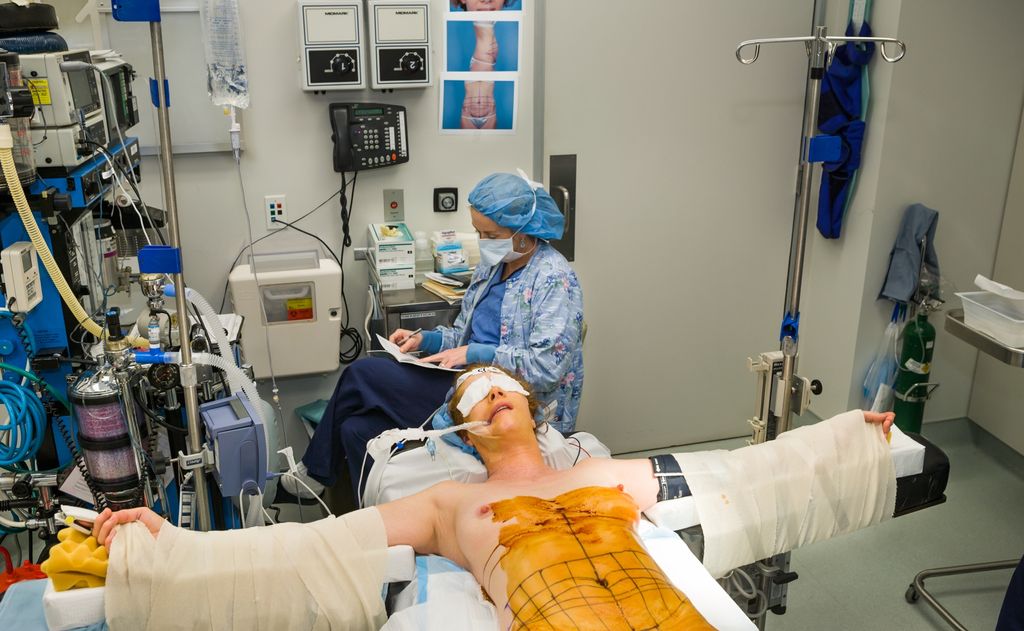 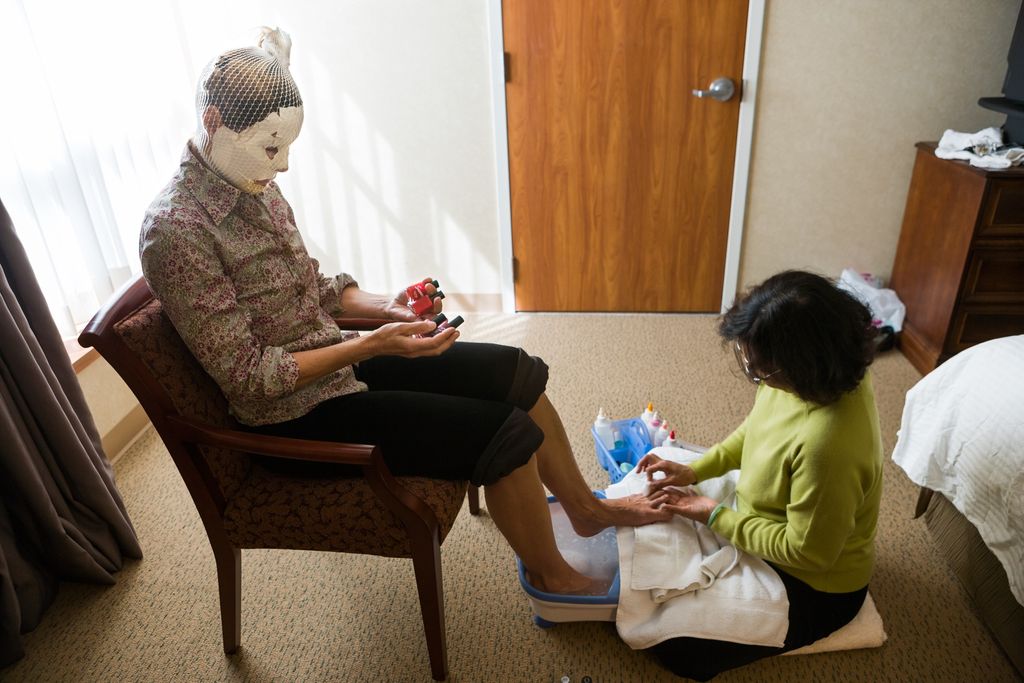 She saved up for a plastic-surgery vacation in Brazil.

Cathy was 31 years old and newly divorced when she acted on a long-standing desire to change her appearance. “I’ve known that I needed a tummy tuck since after I had my daughter, and then the list started growing,” she told Greenfield at the time. “I really studied myself, and once I’d determined which parts were not meshing with the other parts to make a cohesive, beautiful face that I could identify with, I started wanting to fix those areas.”

A school-bus driver and mother of two, Cathy saved for her surgeries for years by budgeting “very harshly” and charged the total cost, $15,000, to her credit card. In 2007, she used a medical-tourism company to travel to Brazil, where plastic surgery is less expensive than in the U.S. and where surgeons are more willing to perform multiple procedures at once. At her surgeon’s suggestion, she added a Brazilian butt-lift to her tummy tuck, breast-lift, breast augmentation, nose job, and liposuction. Fat removed from the abdomen can be injected into the buttocks for “a good shape,” said Cathy’s surgeon.

Naturally, surgeons in the U.S. wish patients wouldn’t travel for such work. Dr. Teitelbaum calls plastic-surgery tourism “a significant problem.” Patients can go abroad, get a procedure (or procedures), and wake up in a hotel room with complications: “What do you do? Call room service? ‘Can I have my scrambled eggs, and can somebody take care of my hematoma?’ There’s a reason it costs more here.”

The Side of Plastic Surgery You’ve Never Seen
tyre nichols Yesterday at 6:07 p.m.
Memphis Police Disband Controversial SCORPION Unit: Updates One day after the city released footage of Tyre Nichols’s arrest and beating, the police department deactivated its embattled violent crimes unit.
spring fashion Jan. 27, 2023
12 Ways of Looking at André Leon Talley The friendships and love stories found inside his estate auction, as told by his nearest and dearest like Anna Wintour, Marc Jacobs, and Tom Ford.
By Cathy Horyn
wait what is happening on tiktok? Jan. 27, 2023
Everything We Know About TikTok’s Lashgate Drama Did Mikayla Nogueira add false lashes or not?
parties! Jan. 27, 2023
Teyana Taylor, Anna Camp, and More of the Bestest Party Pics This Week Parties with Gucci, Sundance, and more.
gone sale-ing Jan. 27, 2023
10 Things You Don’t Have to Pay Full Price for This Week Deals from Dyson, Nordstrom, Shopbop, and more.
friday sales Jan. 27, 2023
19 Things on Sale You’ll Actually Want to Buy: From Lunya to Areaware Including fuzzy Birkenstock clogs, a teensy Cricut heat press, and our favorite weekender bag from Patagonia.
recommendations Jan. 27, 2023
20 Best Butt Plugs You Can Buy Online According to experts.
q&a Jan. 27, 2023
Saint Omer’s Guslagie Malanda Is No Longer an Actress in Secret How the Saint Omer actress went from art curator to awards-season hopeful.
the wedding files Jan. 27, 2023
A Twice-Rescheduled Midweek Wedding in the Hudson Valley “We’re not really ‘farm wedding’ people, so that limited our options.”
By Kaitlin Menza
celebrity couples Jan. 27, 2023
This Good Morning America Romance Keeps Getting Messier Amy Robach and T.J. Holmes are reportedly out at ABC.
keeping up with the royals Jan. 27, 2023
Has Prince Andrew’s Teddy-Bear Collection Been Confiscated? His Buckingham Palace apartment has reportedly been revoked, and with it, his dozens of stuffed toys.
bellissimo Jan. 27, 2023
Where Have I Seen Michael Imperioli’s Home Before? It’s unclear where The White Lotus ends and Imperioli’s apartment décor begins.
couture spring 2023 Jan. 27, 2023
At Valentino, Couture for Today Designers often look to the past for couture inspiration, but Pierpaolo Piccioli of Valentino believes it is only relevant if it talks to the moment.
By Cathy Horyn
valentine's day Jan. 27, 2023
13 Flower Alternatives to Shop for Valentine’s Day Options that will last longer than a week.
culture Jan. 27, 2023
Pamela Anderson Found Pam & Tommy ‘Crushing’ The actress called the Hulu series “salt on the wound.”
extremely online Jan. 27, 2023
I Can’t Shut Up About the M&M’s Drama Revisiting Tucker Carlson’s one-man campaign against the “spokescandies.”
valentine's day Jan. 27, 2023
16 Beauty Products My Boyfriend Won’t Stop Stealing From Me They double as great Valentine’s Day gifts, too.
¡hola papi! Jan. 27, 2023
‘I’m Ashamed of Being Unemployed’ The path is long, crooked, embarrassing, and deeply silly. Having friends and passions will make it tolerable.
By J.P. Brammer
celebrity Jan. 26, 2023
Britney Spears Just Wants Some Privacy The star confirmed police were called to her home by fans.
celebrity Jan. 26, 2023
Ziwe and Lisa Rinna Brought RHOBH to Paris Fashion Week They were “ready to own it” in Mugler.
More Stories