Revered among couturiers as the “designer’s designer,” Cristóbal Balenciaga was famous for keeping a low profile – in the span of over 50 years, he granted only one full interview, to the London Times in 1971. “Nobody knows what a hard métier it is, how killing is the work under all this luxury and glamour,” he said. One-hundred years after the designer opened his first dressmaking business, the Victoria & Albert Museum in London is now showcasing more than 100 of his influential designs in the exhibition “Balenciaga: Shaping Fashion,” opening May 27, with an accompanying photography book out today.

As a pioneering designer of the 20th century, Balenciaga helped shape contemporary fashion with a deft eye for style that still resonates in present-day wear, like the shift dress and the tunic coat. Years ago, with the help of the late fashion photographer Cecil Beaton, the V&A began to acquire his garments and designs. Beaton, an admirer and supporter who helped introduce Balenciaga to the London museum curators, once said: “If Dior is the Watteau of dressmaking – full of nuance, chic, delicate, and timely – then Balenciaga is fashion’s Picasso.”

The designer’s Spanish roots continued to influence his work even after he fled the country, following the fall of the Spanish monarchy in 1931. Spanish folklore consistently appeared in his designs, inspired by bullfighting rings and Flamenco dancers (see a Flamenco-style evening dress in the slideshow ahead). The book, published by V&A Publishing, traces Balenciaga’s influence among 20th-century contemporaries and disciples, like Hubert de Givenchy, as well as his successors amid political unrest in Spain and the commercialization of brands after WWII (Balenciaga refused to partake in the same materialism). Click ahead to see photographs and designs from the exhibition.

Ana de Pombo, sketch for the House of Paquin, Winter 1939. 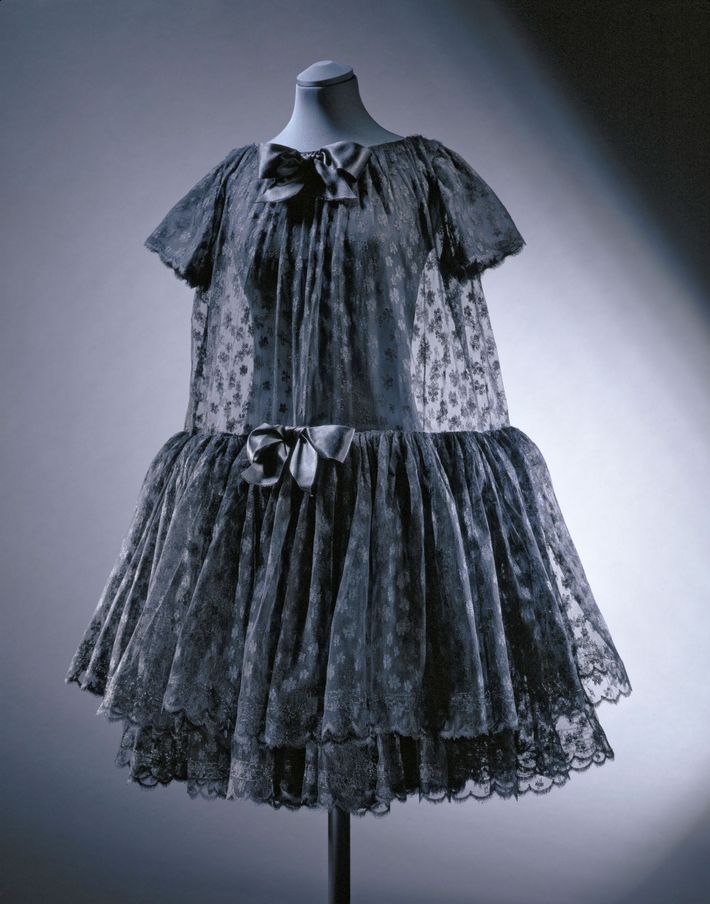 Detail of front of evening dress and cape of black silk gazar by Abraham EISA, Autumn/Winter 1965.

the most fertile man 2:38 p.m.
And Now Nick Cannon Is Rapping About Parenthood “All of my children will always be friends / Even if they mamas is not in agreeance.”
sports! 2:10 p.m.
What Was Prince William Mumbling at Wimbledon? Some people think they saw him drop a royal F-bomb.
transphobia 1:43 p.m.
Celebs Keep Doubling Down on TERF Talking Points Bette Midler and Macy Gray spent the weekend spewing anti-trans rhetoric.
your next move 1:00 p.m.
‘Can I Back Out of a Job Offer a Week Before My Start Date?’ It’s never too late — but you don’t know what connections you may be burning.
explosions 12:40 p.m.
Two Men Caught Fire in Hamptons Goop Store?? Conflicting reports have emerged about the source of the reported blaze.
runway 12:20 p.m.
Two Very Important Blondes (VIBs) Walked Balenciaga Couture Actually three, if you count Kim Kardashian.
paris haute couture 2022 Yesterday at 8:08 p.m.
Dior Shines With a Strong Womanly Show It points to the craving for more female voices.
By Cathy Horyn
power Yesterday at 2:43 p.m.
Everything to Know About the WNBA Star in Russian Custody Brittney Griner sent a personal plea to President Biden.
fourth of july Yesterday at 1:00 p.m.
Highland Park Shooting Suspect Is In Custody Charges have yet to be filed.
reading list Yesterday at 10:00 a.m.
Honey & Spice Is the Ultimate Summer Romance Read Author Bolu Babalola is a “Romcomoisseur.”
self Yesterday at 8:00 a.m.
How to Help Your Friend Through Divorce There’s not a perfect universal script we can use to respond. But here are a few places to start.
in sickness and in health July 4, 2022
Travis Barker Is Feeling ‘Much Better’ He said he was hospitalized with “life-threatening pancreatitis” after an endoscopy went wrong.
extremely online July 4, 2022
I Can’t Shut Up About the Barbie Movie Each behind-the-scenes look is a sparkly pink hit of nostalgia and dopamine.
By Mia Mercado
celebrity July 4, 2022
Halsey Reflects on the Abortion That Saved Their Life “My abortion saved my life and gave way for my son to have his.”
swimwear July 4, 2022
21 Swimsuits Worth the Awkward Tan Lines From Everlane, ASOS, Ganni, Miaou, and more.
wait what is happening on tiktok? July 4, 2022
Why Does TikTok Want Me to Use My Vagina for Perfume? It’s called “vabbing,” obviously.
how i get it done July 4, 2022
How Juliette Binoche Gets It Done The actress tells the Cut about almost drowning while filming, her favorite chocolat, and why she doesn’t watch movies before bed.
By Jenna Mahale
astrology July 3, 2022
Madame Clairevoyant: Horoscopes for the Week of July 4 Late Monday night, action planet Mars enters Taurus and invites us all to settle in for a long haul.
By Claire Comstock-Gay
sex diaries July 3, 2022
The Queer Divorcé Exploring Polyamory This week’s sex diary.
lawsuits July 3, 2022
Amber Heard Asks the Court to Set Aside the Defamation Verdict A new filing from her attorneys claims the verdict was not supported by evidence.
More Stories