Testosterone: It gets a bad rap, sometimes. Since men have much more of it than women, it’s implicated every time there’s a bro brawl at a bar, every time a man flies into a rage over something trivial. Too much testosterone, the thinking goes, turns you into a brutish caveman.

But what does extra testosterone actually do to men’s cognitive capabilities? That’s what the authors of a new study in Psychological Science, led by Colin Camerer, a behavioral economist at the California Institute of Technology, sought to find out.

For the study, Camerer and his colleagues had 243 males participate in an experiment in which they were administered either testosterone gel or a placebo and asked to complete a three-item Cognitive Reflection Test, or CRT, as well as some arithmetic questions. The CRT test included questions like A bat and a ball cost $1.10 in total. The bat costs $1.00 more than the ball. How much does the ball cost? The arithmetic questions, on the other hand, were, well, arithmetic — the respondents were asked to add together a bunch of two-digit numbers.

The bat-and-ball question is a classic problem in the behavioral-economic literature. Because so many people in so many studies have immediately answered “$.10,” which is wrong, it’s held up as an example of the difference between so-called System 1 thinking, which is gut-level and intuitive, and System 2 thinking, which is a bit more deliberative. The $.10 answer is a classic example of how System 1 can lead us astray — it feels very right but, in fact, isn’t. The CRT, then, is designed to measure the extent to which respondents are answering questions in something of a knee-jerk way, as opposed to stopping to think and carefully work through the situation.

Camerer and his colleagues found that the men in the testosterone group did significantly less of that careful thinking and reflection: 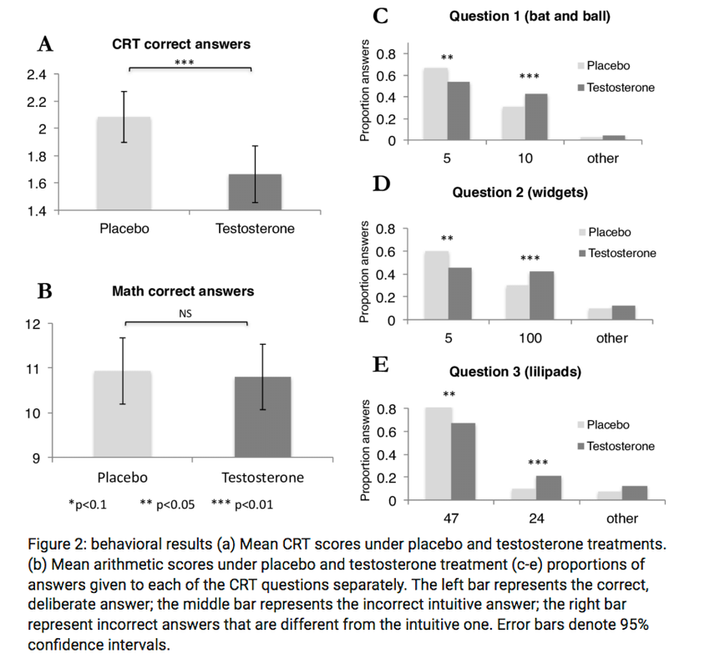 As you can see, testosterone made the respondents significantly more likely to pick the answer that “felt” right but that wasn’t in fact correct. It didn’t seem to have an effect on their ability to solve arithmetic problems, which don’t have an answer that “feels” right and therefore don’t lend themselves to gut-impulse guessing.

All this supports the researchers’ belief that “[testosterone] biases decision-making towards rapid, system 1 processing.” Insert your own joke about hormone-addled teenage boys here.