More than 20 years of colorful clothing and accessories by designer Anna Sui will be on display in the exhibition “The World of Anna Sui,” opening Friday at the Fashion and Textile Museum in London. The show makes Sui the first American fashion designer to be honored in a U.K. retrospective. An accompanying book, out May 30 from Abrams, features photos of Naomi Campbell and Linda Evangelista at the launch party for Sui’s first New York boutique, backstage photos of Gigi Hadid, and sketches from the label’s archives.

At the museum showcase, purple walls and red platforms serve as the backdrop for dozens of purses, leather boots, and mannequins clothed in Sui’s richly textured, patterned designs. The exhibition covers 12 “styles” — like punk, retro, surfer, and Americana. Another section spotlights her mood boards for many collections. Click ahead to see Linda Evangelista, Victorian dresses, and portraits of Sui herself.

“The World of Anna Sui” is on view at the Fashion and Textile Museum in London from May 26 to October 1. 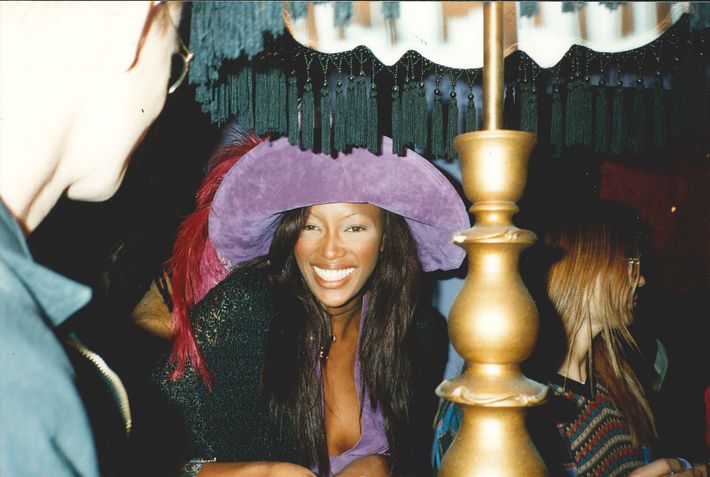 At the opening party for the first New York boutique in 1992.

At the opening party for the first New York boutique in 1992.

Wearing a Zandra Rhodes print dress for the Spring 16 show.

“When I made my first punk collection in Spring 1994, I wanted to make it positive. The concept of nihilism was never me, anyway. I could never believe there was no future. DIY, on the other hand, I could buy into because I felt I’d always done everything myself.”

Pre-Raphaelite-inspired hair and accessories from the Spring 2014 show.

“I couldn’t afford the clothes then, but the minute I could, I started collecting them. Just like chasing a dream…And the dream stayed with me as an influence on my own style.”

“The Ballets Russes weren’t exactly Victorian, but they were an extension of my fascination with the Belle Époque and the demi-monde of the time – so rich, so decadent.”