Because you definitely forgot, Father’s Day is on Sunday. Damn, you messed up again. In your defense, though, this day presents a complicated problem for you: Your dad isn’t some Jonathan Franzen nerd who watches Planet Earth on his iPad and wears glasses. He’s a man. And real man gifts for real men are becoming harder and harder to find.

Your dad’s not like other dads. He’s stronger, bigger, tougher, hairier. He’s got balls for brains and brains in his balls. He loves fishing, farting, and threatening teenage boys with his gun if they “get too close to my baby girl.” Your dad has never cried in his entire life except for when he contracted a common cold and had to take sick leave for three weeks because Deb, you have no idea, my body aches and my nose is so stuffed up. Your dad once did donuts in his truck on your front lawn just to prove he could. He shit on the kitchen floor in protest after the series finale of Sons of Anarchy.

7 X-Treme Teas for Men Only

Your dad is the real dad of dads. If there was a TV show called So You Think You Can Dad? he’d be the unanimous winner. He’d spend the prize money on illegal fireworks and burger meat.

For a dad like yours, not just any old Father’s Day gift will do. No ties with Garfield on them, no novelty socks embroidered with a jaunty dancing taco, not even an Amazon Echo (he already has five of them stationed throughout the house due to the sheer thrill of yelling a woman’s name to get her to do things). Instead, you have to seek out gifts with the most masculine appeal. Like universal health care, which your dad hates, we’ve got you covered.

For the dad who says fruit is too girly

A well-known fact is that fruit is for girls. These sports fruit are the double whammy of gifts: Your dad gets to live out his lifelong dream of eating an entire football and you’re helping him with his vitamin C deficiency.

If your dad isn’t serious enough about grilling to cook a whole shank of beef on a grill designed to look like a toolbox, then he sounds like a real vegan “qui-NOAH” guy. Unless he’s Tom Brady, in which case, all due respect, Mr. Sir TB12.

When Sons of Anarchy ended, your dad locked himself in his “mancave” and didn’t come out for six days. Luckily, The Walking Dead is still alive and kicking (dad joke about zombies). And that Norman Reedus guy? He seems pretty all right — but not in a sexual way, okay? Though I wonder how much he can lift …

For manly men only

Your dad’s wallet is full of cash, like full to the brim of cash, so many cash bills it’s insane. Why? Because real men provide. But if his Kenneth Cole wallet can stand to fit one more thing, why not make it this MAN CARD? Just please pay attention to the disclaimer: This metal card with a bottle opener is for manly men only.

For the dad who loves his nuts

It’s never been fully explained why nuts are considered “a man thing,” but if you have any insight, this jar is a great gift. Nuts! As we all know, they are for men.

For the dad who “keeps it real”

When you were born, your dad responded to your tiny head pushing out of your mother’s vagina with with a slew of crude remarks that cannot be reprinted here. He has the mouth of a sailor and he isn’t ashamed of it. But he also has some papers that really need to be held down. Combine his two dearest loves: cursing and holding down papers. He’ll f*cking love you for it.

For the dad who types with one finger at a time

Typing? What’s that? Is that what you do for your indoors job? The one your dad spent a truckworth of cash on a college degree for? Waffles, on the other hand, are the currency of real dads nationwide. Who’s typing now?

For the gross dad 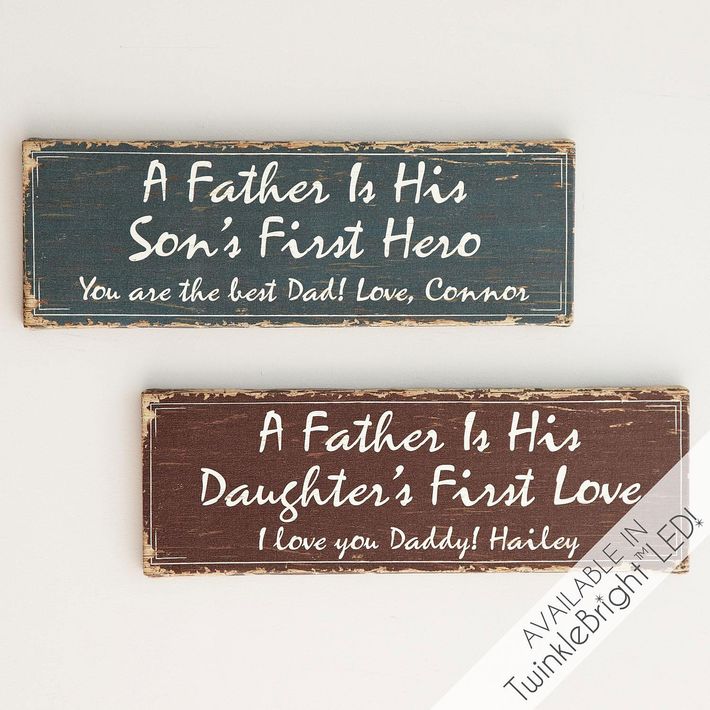 If your dad is into this, he’s gross. 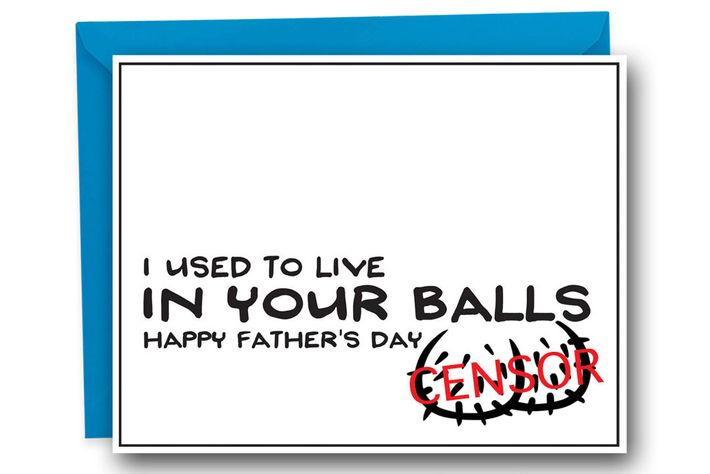 You and your dad are close. You fart together. You pump iron together. You crack jokes about balls together. Follow in the tradition of all those jokes you guys make by giving him this irreverent card about balls. At the Father’s Day cookout, watch with pride as he shows it to all your uncles. “Heh, get it?” he’ll say. “Balls.”

For the dad who loves a good, old-fashioned novelty tee and also guns

Haha, the joke in your family has always been that your mom is a real ballbuster. (Haha, balls.) “Son, never get married,” your dad often says, pulling you aside at the double-bolted entrance to his mancave before the nine-hour Sunday sports marathon, “or you lose all your freedoms.” This shirt, which makes a good joke about loving one’s wife, is the dog whistle for dads. I love my wife (eyeroll) … when she lets me buy ammo for my gun. Sweet. An M. Night Shyamalan–style twist.

He’s gonna love this one, I can guarantee it.

parties! 29 mins ago
Microdosing Opulence at the Hermés Block Party The Parisian fashion giant celebrated the opening of its new flagship store in New York.
how does it fit? 6:17 p.m.
We Tried Ganni’s Top-Selling Pieces on 3 Different Bodies Are we #GanniGirls?
society pages 5:56 p.m.
Martha Stewart and a Big Fish Stopped by the Tin Building Opening Jean-Georges Vongerichten’s South Street Seaport food hall celebrated its opening with a themed culinary funhouse.
q&a 4:49 p.m.
Hiam Abbass on Playing Ramy’s Matriarch, Maysa We spoke to the Ramy star about the show’s ambitious third season.
fashion 4:22 p.m.
Is There Trouble Between Anna Wintour and Edward Enninful? A new report from the Daily Beast hints at unrest between the Vogue editor and her protégé.
always shopping 4:20 p.m.
Winter Gloves to Buy Before It’s Too Late We spoke with experts to get their favorite pairs.
parties! 3:45 p.m.
Dua Lipa, Amal Clooney, and More of the Bestest Party Pics This Week Some of our favorite looks from the New York Ballet Gala, a Chanel launch, and other glam events.
power 3:35 p.m.
Protests In Iran Continue Over Death of Mahsa Amini Despite a brutal crackdown, women continue to take to the streets in defiance of government orders.
the most fertile man 3:30 p.m.
Nick Cannon’s Quest to Populate the Earth Continues Cannon just welcomed his third child with Brittany Bell.
celebrity 3:16 p.m.
Trevor Noah And Dua Lipa Sure Look Cozy The pair was spotted kissing in New York City this week.
pfw spring 2023 1:46 p.m.
At Rick Owens, an Ancient Muse Plus more from Paris Fashion Week, including a new energy at Schiaparelli.
By Cathy Horyn
friday sales 1:34 p.m.
20 Things on Sale You’ll Actually Want to Buy: From Disney to Neutrogena Including K-beauty must-haves and a great pair of mom jeans
get it together 1:19 p.m.
7 Light Therapy Lamps to Help With Seasonal Affective Disorder How to use SAD lamps and how they work, according to psychologists.
By Amanda Arnold, Amanda Svachula, and Brooke LaMantia
action item 11:45 a.m.
How to Help Those Impacted by Hurricane Ian As of Friday, nearly 2 million people in Florida were still without power.
always shopping 11:30 a.m.
15 Classic Wool Coats Under $400 Because it’s getting cold out there.
By Andrew Nguyen, Devine Blacksher, and Bianca Nieves
health 11:00 a.m.
The Myth of Adrenal Fatigue The “condition” touted by the wellness industrial complex could explain everything you’re feeling — if only it were real.
By Annaliese Griffin
holiday gifts 10:30 a.m.
35 Gifts for Literally Any Man in Your Life Foolproof options, whatever the occasion.
By Andrew Nguyen and Chinea Rodriguez
celebrity 10:10 a.m.
Sounds Like Hailey Bieber and Selena Gomez Are at Peace On a new episode of Call Her Daddy, Bieber denied the rumors that she and Gomez are feuding after she “stole” Justin Bieber.
how i get it done 10:00 a.m.
How Hanifa Designer Anifa Mvuemba Gets It Done During Fashion Week “My team knows when I’m in New York it’s for work, but it’s also me enjoying myself.”
By Asia Milia Ware
extremely online 10:00 a.m.
I Can’t Shut Up About Kim Trying to Walk in This Dress There is something deliciously humbling about watching a full-blown adult bunny-hop up some stairs.
More Stories