The award-winning graphic artist, whose new book is out this month, gives an inside look at her creative process. 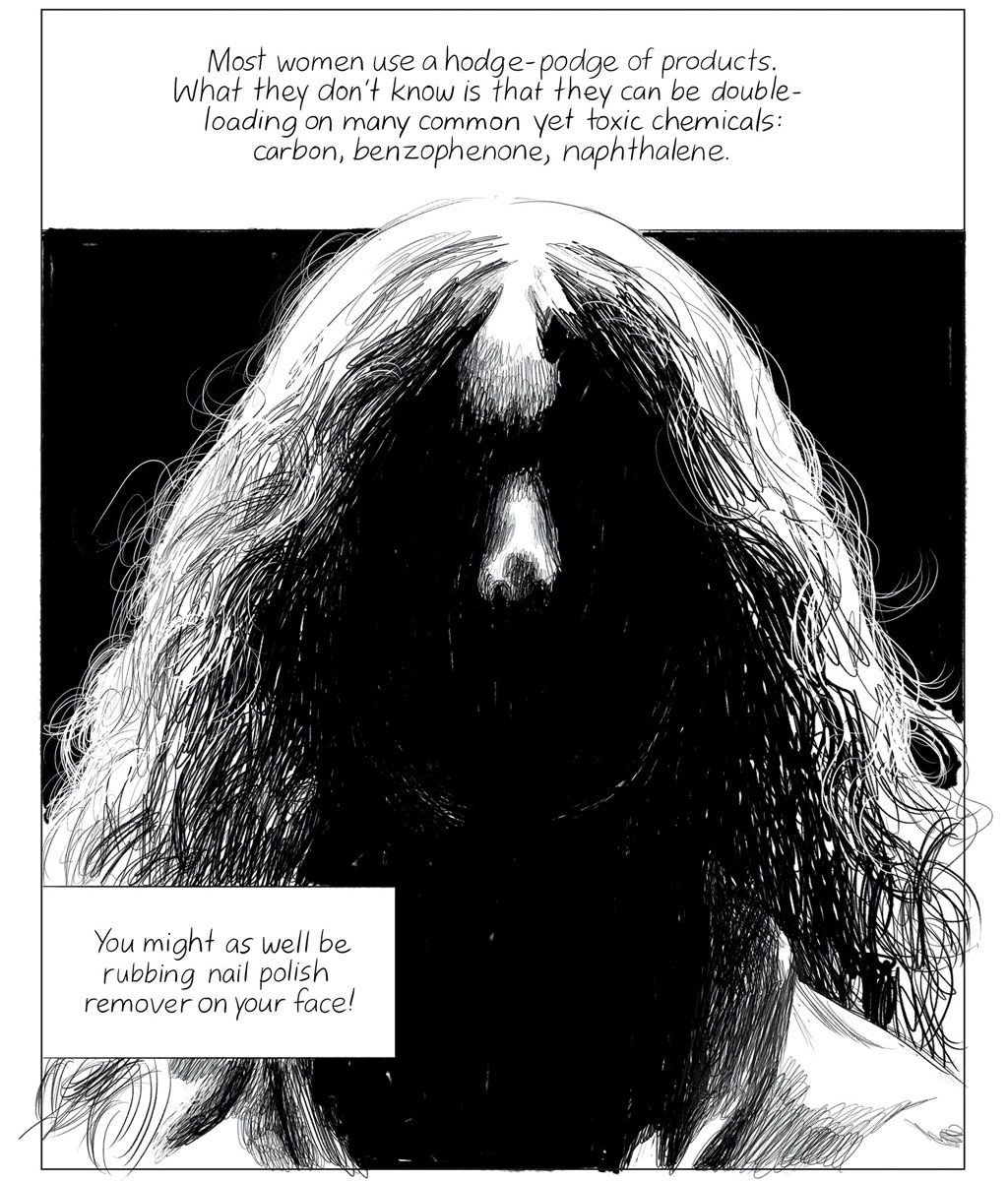 This spring, a Canadian graphic novel earned the number-one spot on the American Library Association’s list of most banned and challenged books in the United States. The book in question, This One Summer, is a collaboration by Jillian Tamaki and her cousin, Mariko, and although it doesn’t show any sex or nudity, it does picture two teenage girls navigating things like breast size, pregnancy, and sexuality. Deeply personal themes are a trademark of Tamaki’s work. Her drawings have appeared in places like the New York Times, The Atlantic, and even on the New York City subway, but it’s the 37-year-old artist’s stories centered around the complicated lives and identities of women that have earned her the most praise. In her new book, Boundless — out this month from Drawn & Quarterly — Tamaki continues this tradition, telling stories that infuse everyday situations with drama and eerie surreality.

For instance, “The ClairFree System” is a 20-page narrative that reads like a Proactiv ad turned personal conversation: one woman selling skin-care products, Avon-style, to another in the cozy confines of a neighborhood coffee shop. “Listen, if you had told me 20 years ago that one day I would love my skin, I would have said you were crazy,” begins the familiar appeal. But the story quickly spirals into a series of existential questions: one woman asks the other what she cares about, what she wants to do with her life, what her legacy will be. Photorealistic drawings accompany each block of text, and it’s the juxtaposition of the two — along with the narrator’s creepily persistent tone — that makes the story, which originally appeared in Hazlitt, compelling.

We wanted to better understand Tamaki’s process in creating “The ClairFree System” so we asked her to walk us through several panels of the story. Here, she explains the inspiration behind her images and what she hopes readers to take from her work. 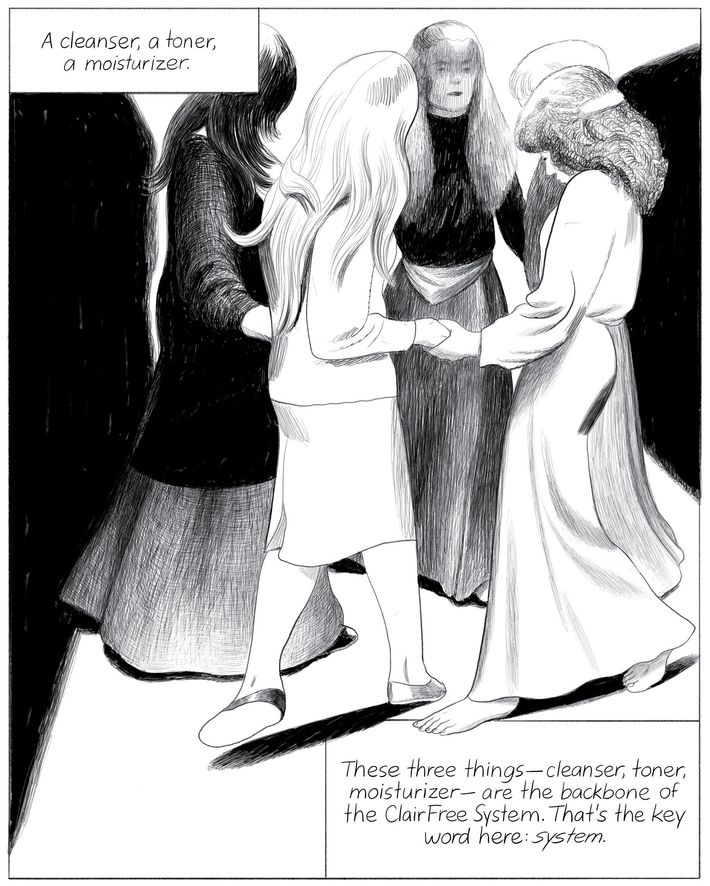 This is a drawing of a photo I found at a flea market in Williamsburg a million years ago. I think it looks like a fashion show, or maybe it’s a Wiccan thing. Either way it looked ritualistic to me, so I used it to illustrate a passage about rituals. Our lives are full of them — from skin care to packing a suitcase a certain way — because they make us feel safe and in control. I used a lot of found images for this story because I wanted to create a collage effect by illustrating a wide spectrum of people and giving no explanation of their relationship to the text. 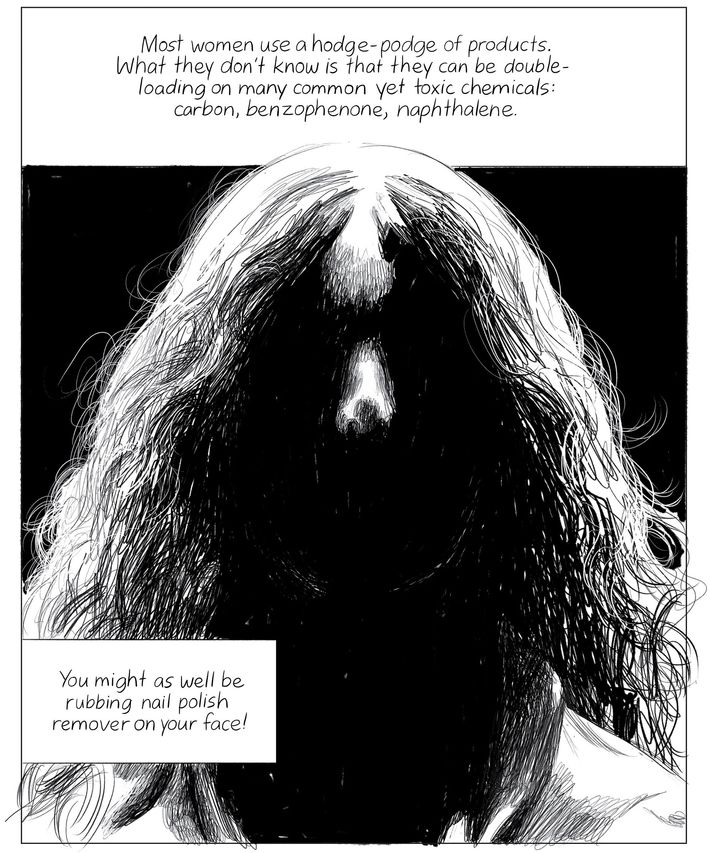 This was a found photograph, too. The faceless woman is a way to represent the fact that you don’t even know what those chemicals are — you don’t know if they’re good or bad for you. People draw these arbitrary lines around what’s acceptable and unacceptable — they won’t put soy milk in their coffee, but they’ll live in a city or dry-clean their clothes. If someone with a voice of authority says you shouldn’t drink soy milk, then we take it very seriously. But none of us really knows anything. The “nail-polish remover” line is a scare tactic; it can’t be verified. It’s the add-on, like, “Here’s some science that you don’t understand,” and then “Here’s the line to make you understand that you should be afraid.” 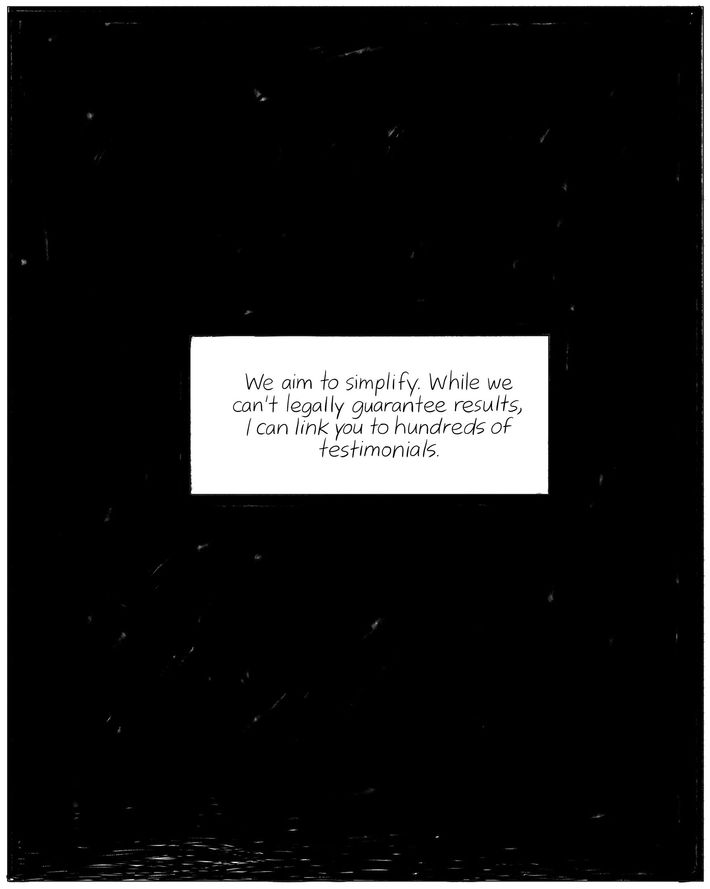 This image is simple because it contributes to the layered effect of the story — before this page, it’s like you’ve been underwater in a dream state of photorealistic images and half-comprehensible jargon, and now you’re reemerging into the real world. It uses the words “we” and “I,” which is the first instance in the story where you realize you’re not overhearing a TV commercial or a YouTube ad — you’re listening to two women talking to each other. And it’s clearly a sales pitch; it’s one woman manipulating the other. 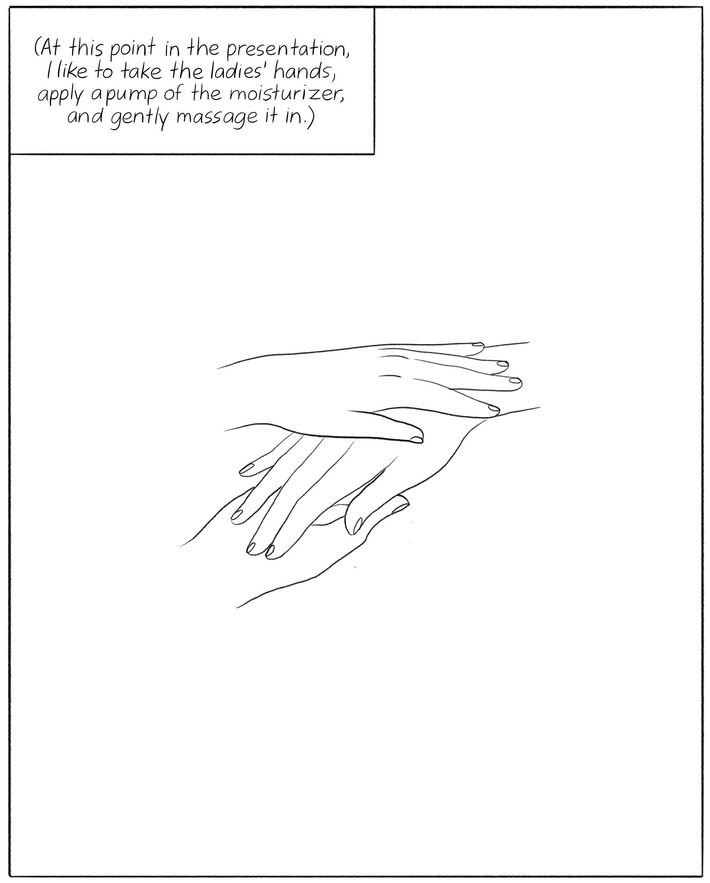 This image continues that feeling of resurfacing. All the images up until this point have been rendered and photorealistic, but this is a simple line drawing. I made that choice because I wanted to create that difference. The images before are so specific, they’re so rendered, they’re so emblematic of moments occurring somewhere in the universe, and then you flip to a line drawing and it becomes much more symbolic and relatable. 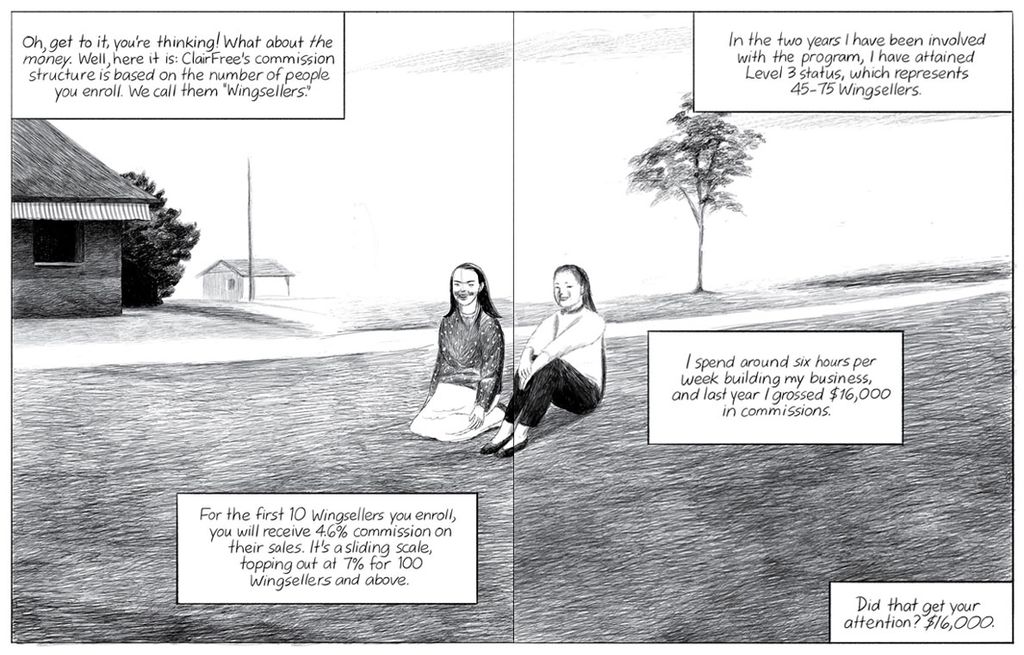 This image is another found photo. It’s supposed to suggest a sense of community, which contrasts with the term “Wingsellers” — a made-up word and a testament to jargon that’s so absurd but gets assimilated anyway, like Frappuccino. “Wingsellers” is really referring to your friends or your peers or your kids’ friends’ parents — people who would normally be called a community, but here they’ve been dehumanized into a number or a statistic. In the ‘80s and ‘90s when I was growing up in the suburbs, housewives and mothers would try to make extra money selling Avon or Mary Kay or whatever, and it was all predicated on friendship: your neighbors, your friends, your family. Again, it’s a form of manipulation. 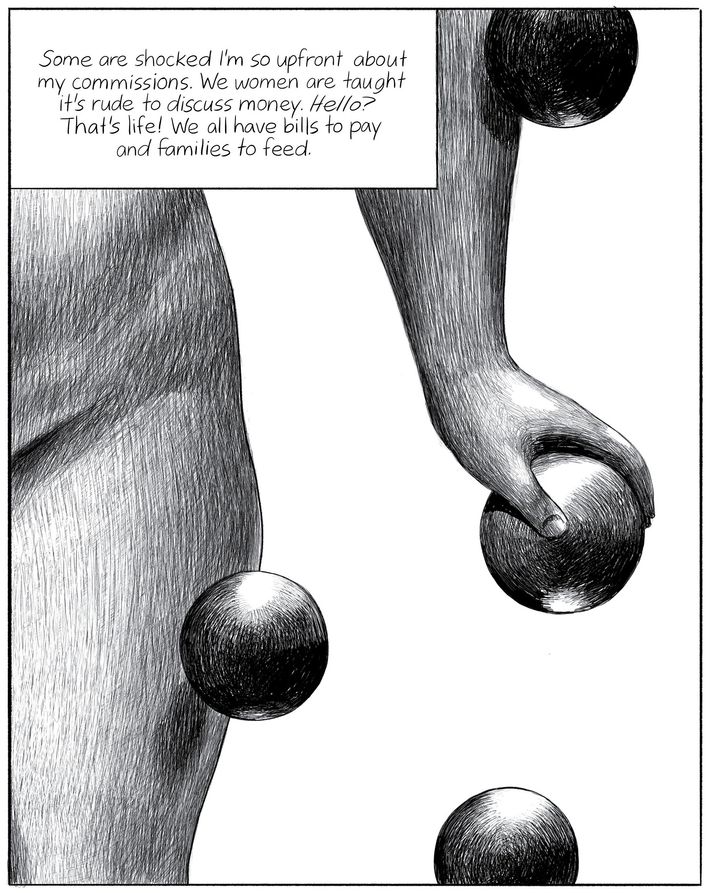 This is an adaptation of a classical sculpture from the Art Gallery of Ontario, which has an amazing collection. In the original sculpture the woman is holding a single ball, but I added some extra orbs to create a juggling effect. It pairs with the text to show that we’re all trying to keep balls up in the air. When I was writing the story I had a collection of found photos, but I wanted more images, and I also wanted them to be somewhat “found.” So I went to the gallery, copied some of the sculptures, and adapted them to a modern context. 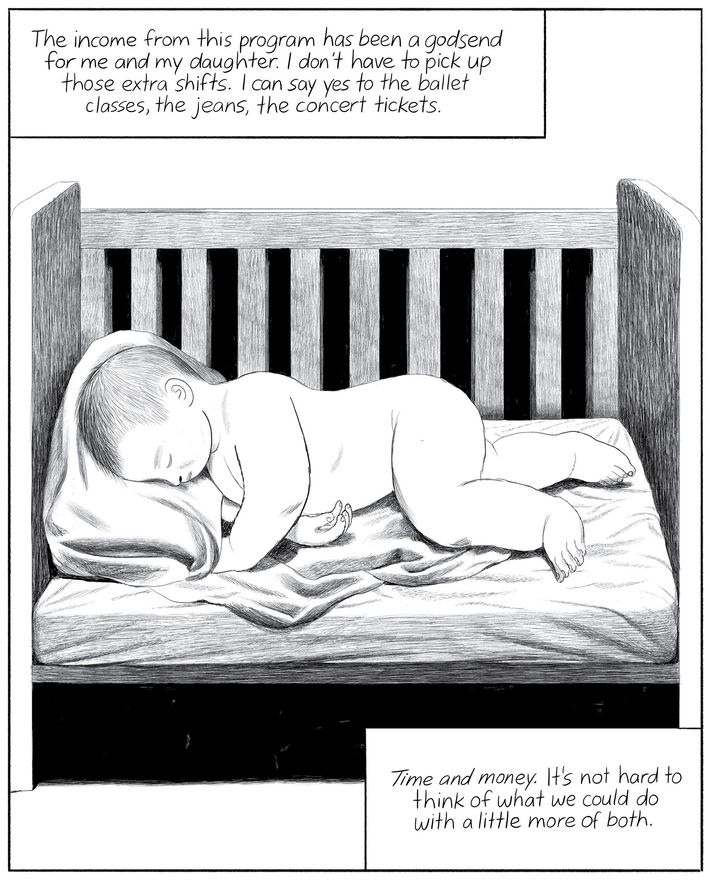 This is another sculpture from the Art Gallery of Ontario, but the original artwork was just the child — I created the rest. A lot of this story is about reframing context: taking a classical sculpture or a photograph, which is a specific instant in time, and stripping it of its information to make it universal, which is what I did here. The image itself is about someone’s hopes and dreams for their child — about everyone’s idea of a great parent, which is that they can give their kid everything they want. I’ve heard people say that a new child is a pure, unsullied human being who hasn’t ever made a bad decision — that they’re without sin. I find that extremely hopeful. I don’t have children, but I would imagine the desire to prolong that state is an emotion every parent feels. 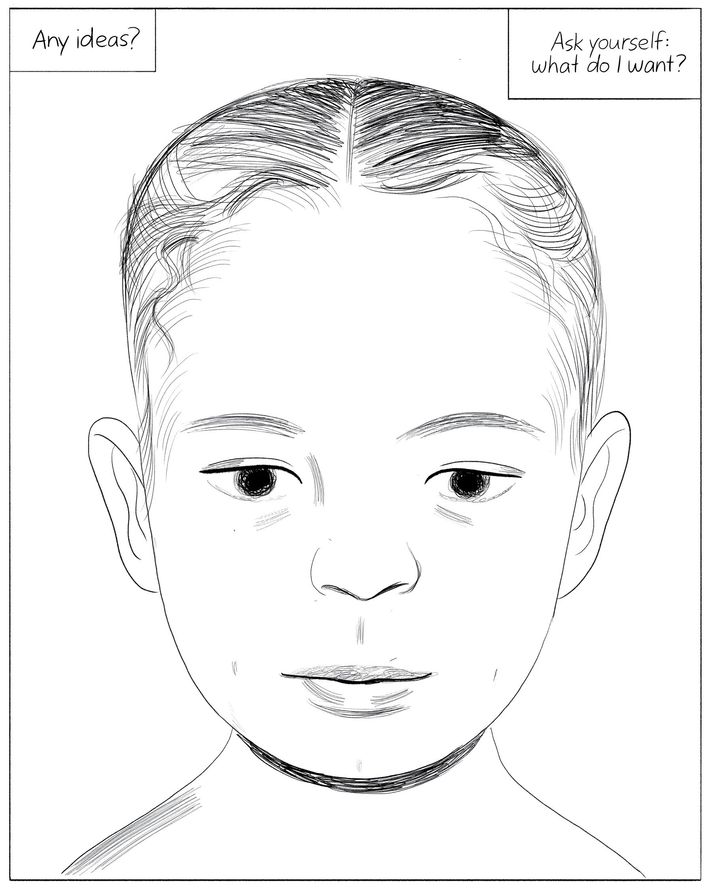 This image is also adapted from a sculpture; it’s a beautiful child who will grow up to reach its full potential, which is meant to juxtapose the existential question posed here. That’s the strange thing about aging: potential never fully disappears, but it’s not the same as when you were young. 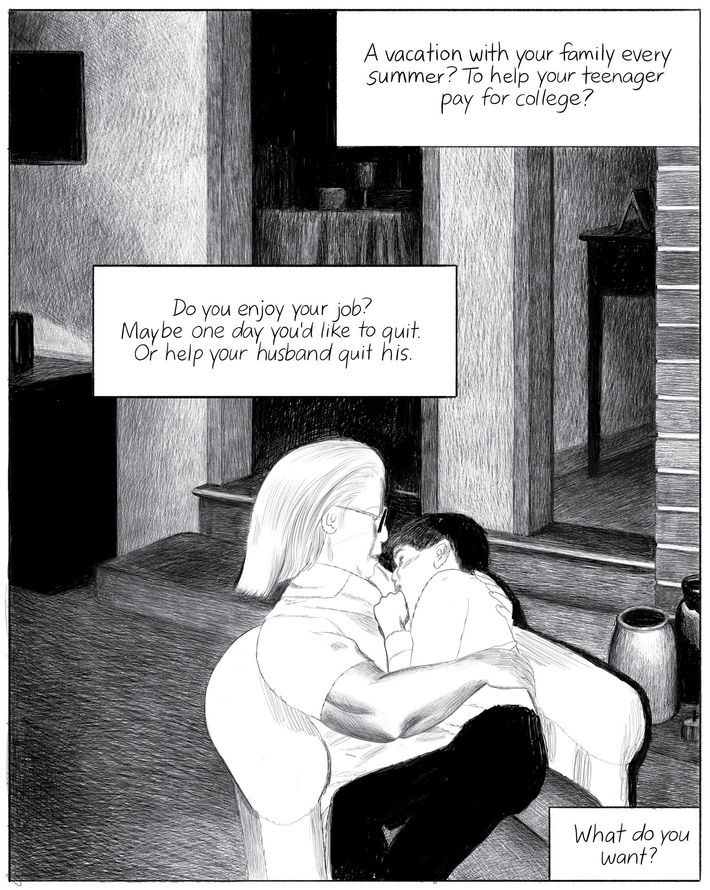 This is another found photograph, which I assumed was of a grandmother and a child in their home, and the child looks very vulnerable. Part of this image is about the question in the text: “What do you want?” I think a lot of people find that the things they’ve been pursuing are society’s wants, and not necessarily totally their own. The other part is about wanting to protect your family and keep them safe. Again I don’t have children, so I’m sort of projecting, but I’m guessing that one of the reasons having children is so powerful is because you place your hope within your children. There’s a feeling that this child can do better than you — that you can protect this child from the pain you’ve felt, or the mistakes you’ve made.

Jillian Tamaki Explains Her Creepy Skin-Care Comic
pfw spring 2023 Yesterday at 5:30 p.m.
A Comedy of Errors at Paris Fashion Week This has been an utterly ridiculous Paris season, in the best and worst sense. And it’s not over yet.
By Cathy Horyn
fashion Yesterday at 5:29 p.m.
How Bella Hadid’s Spray-on Dress Was Made We were just as confused. So we found out.
celebrity Yesterday at 5:04 p.m.
Angelina Jolie Claims Brad Pitt Choked One of Their Children In her countersuit against Pitt, Jolie also alleged he poured beer on her and their children during the 2016 plane incident.
power Yesterday at 4:24 p.m.
‘Pro-Life’ Candidate Denies Report That He Paid for an Abortion Herschel Walker’s own son denounced him after an alleged ex-girlfriend told the Daily Beast that Walker had paid for her abortion.
always shopping Yesterday at 3:30 p.m.
12 Best Pairs of Leggings for Running in the Winter We spoke with runners to round up the warmest leggings so you don’t have to.
blackpink Yesterday at 3:01 p.m.
What’s Going on With BLACKPINK’s Leaked-Photo Drama? Everything to know about Jennie and V’s photo leak.
style Yesterday at 2:54 p.m.
Gigi Hadid Called Out Ye for ‘Bullying’ After His YZY Show Ye went after Vogue contributing editor Gabriella Karefa-Johnson on Instagram after she disapproved of his “White Lives Matter” shirt.
always shopping Yesterday at 2:30 p.m.
The Cut Shop’s Favorite Black Boots The kind you can wear every day.
divorce rumors Yesterday at 2:22 p.m.
Gisele Bündchen and Tom Brady May Be Over for Good A new report claims Bündchen and Brady have hired divorce attorneys.
breakout Yesterday at 2:00 p.m.
Paulina Alexis Doesn’t Care If You Think She’s ‘Too Rez’ The Reservation Dogs actress won’t let anything — or anyone — get in her way.
By Simon Moya-Smith
ask a boss Yesterday at 12:00 p.m.
‘How Do I Say No to Administrative Tasks That Aren’t My Responsibility?’ Once you start doing them it can be hard to stop, because you become the person with the track record of doing them well.
q&a Yesterday at 11:57 a.m.
Lio Tipton Is Still Processing The A Friend of the Family actor breaks down their approach to the true-crime genre.
rip Yesterday at 11:08 a.m.
Loretta Lynn, Country Legend, Dead at 90 Her raw and feminist country songs influenced generations of performers.
culture Yesterday at 10:15 a.m.
Where Did Don’t Worry Darling Go Wrong? Hollywood feminism strikes again.
first person Yesterday at 9:00 a.m.
Easy Target I was harassed and assaulted in broad daylight. Would bystanders have intervened if I was white?
By Vanessa A. Bee
"try everything" — shakira Yesterday at 8:50 a.m.
Bye, Guy In their first video as an official trio, the Try Guys say they were just as shocked by Ned Fulmer’s behavior as you were.
cut covers Yesterday at 8:00 a.m.
The Pain and Glory of Cori Bush In less than two years, the congresswoman built a base of power in D.C. by wearing her hardships on her sleeve.
By Rita Omokha
wtf Oct. 3, 2022
Everything We Know About Kanye West’s Harmful YZY 9 Show At his YZY 9 show, West printed on shirts a slogan used by white-supremacist groups.
review Oct. 3, 2022
Balenciaga Says, ‘Here’s Mud in Your Eye’ Demna toasts the wild and real.
By Cathy Horyn
power Oct. 3, 2022
Iranian Forces Led Brutal Crackdowns Against University Protestors Despite forceful government intervention, women continue to take to the streets in defiance of government orders.
More Stories