For her first interview as an NBC News anchor, Megyn Kelly has landed a big kahuna of a subject: Vladimir Putin. It would be a big “get” for any reporter, but it’s especially monumental for Kelly, since she’s attempting, with her new role, to leave the partisan ugliness of Fox News behind for the greener pastures of mainstream media celebrity. But threatening to eclipse the talk about her first “get” has been the befuddlement over what she chose to wear during the interview, which airs Sunday night.

Promo images show her in an off-the-shoulder blue velvet cocktail dress with a significant slit, accessorized by slinky, open-toed stilettos and a gold ring the size of a gumball. It’s the kind of attire you might see at a holiday party or a high-school dance, less so around a conference table. (The dress, by designer Yigal Azrouel, retails for $990.) Entertainment Tonight trumpeted, “Megyn Kelly rocks an off-the-shoulder velvet dress for her interview with Russian president Vladimir Putin,” while the Daily Mail, a frequent and enthusiastic critic of Kelly’s, covered the look in predictably forensic detail: “The velvet sheathe [sic] flattered her physique with its calculated darting while the off-shoulder neckline provided for a subtle and sexy sense of sophistication.”

In making a sartorial choice like this — one that draws attention to her own appearance over her interview subject — Kelly seems to be at odds with her mission to leave partisan cable behind and become a broadly palatable star in the mold of Diane Sawyer or Oprah, whom she’s reportedly cited as an inspiration. But looking back at her style over the years, it’s not as out-of-character as you might think. Like her fellow female Fox anchors, she favors dresses (the network actually banned female hosts from wearing pants on-air until recently), but she has always gone a little more, shall we say, directional — opting out of the jewel-toned sheath uniform, especially once she got her own show, and steering toward black and white looks, cutouts, hardware, leather dresses, and shoulder-baring. She’s also tried to play in the fashion sandbox, wearing Altuzarra and a heavily embroidered Badgley Mischka to the past two Met Galas. 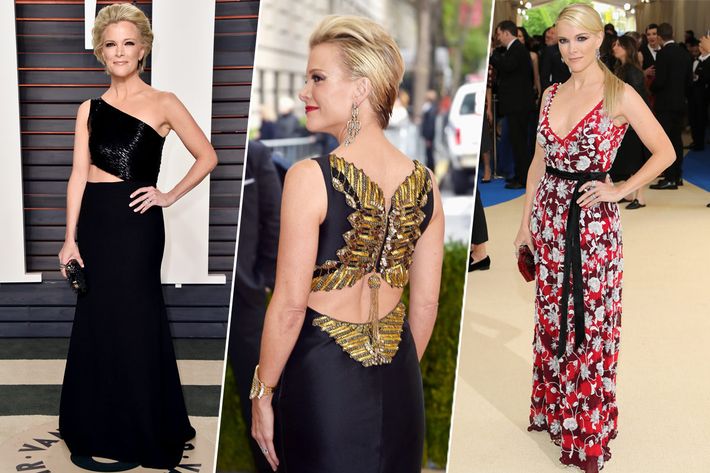 And profiles of Kelly have inevitably focused on her fashion and her looks (less discussed in these types of stories are things like her insistence that Santa Claus is white or calling pepper spray “a mere food product.”) She summed up her style to the L.A. Times as “tailored, classic and never frilly,” adding, perhaps to set herself apart from her channel mates, “I’m not big on the hot pinks, bright reds,” or on statement accessories. For a job interview before she was famous, she bought a thousand-dollar Dolce & Gabbana dress for a job that paid $17K a year. And for her first White House Correspondents’ Dinner in 2004, she recalls in her book Settle for More that she calculated her outfit accordingly: “I wore a hot pink dress, because I realized no one would know me, and I wanted to stand out.” Kelly has never had trouble admitting that she is a woman who is cunning about using style to get attention. 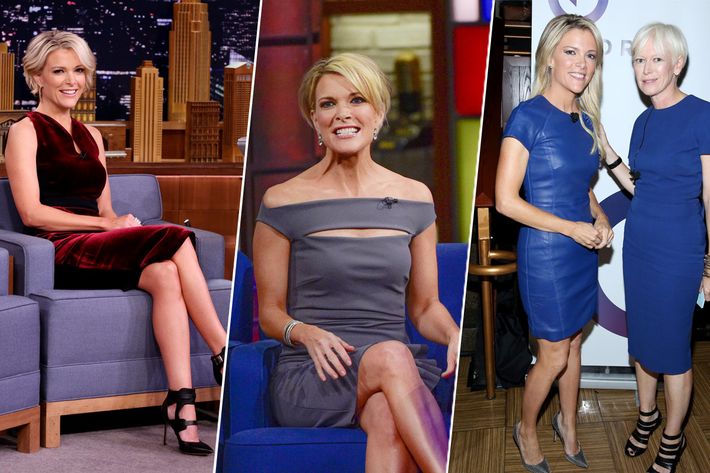 Her wardrobe choices have elicited fiery responses before. After she wore a spaghetti-strap dress to the RNC this summer, people were quick to say she resembled an “escort,” or looked like she was wearing a bikini. She later told the New York Times, “‘I can be smart and challenging while I wear spaghetti straps, and everyone is just going to have to get their heads around that.’” It seems Kelly has decided to weaponize that prurient reaction, and then retrofit it as empowerment, harnessing our current vogue for shouting down “shaming” of all kinds. She knows we’re going to be talking about her fashion anyway, so why not get some traction out of it? Perhaps it means more people will be watching Sunday night.

What Are We to Make of Megyn Kelly’s Interview Attire?

celebrity 3:33 p.m.
Kardashian News Drop: a Baby and a Breakup Khloé Kardashian welcomes another baby as Kim Kardashian and Pete Davidson reportedly break up.
celebrity 12:41 p.m.
Kim Kardashian Reportedly Resigned As Queen of Staten Island Her nine-month relationship with Pete Davidson is allegedly done.
backlash Aug. 5, 2022
What Is Going On With Jackie Aina? Her latest Forvr Mood collection was supposed to be an ode to Nigerian culture. Some fans aren’t sold.
celebrity beauty encyclopedia Aug. 5, 2022
An Encyclopedia of Celebrity Beauty Brands Here are over 60 products that famous people have made for your face.
By Daise Bedolla, Kathleen Hou, and Erica Smith
friday sales Aug. 5, 2022
20 Things on Sale You’ll Definitely Want to Buy: From Everlane to Patagonia Including two deals exclusively for Strategist readers.
parties! Aug. 5, 2022
Karen Pittman, Naomi Watts, and More of the Bestest Party Pics From the Week All of our favorite looks to kick off August.
hairy situations Aug. 5, 2022
Doja Cat Doesn’t Think Hair Is ‘Cool’ So she shaved it all off — in front of her followers.
much to think about Aug. 5, 2022
Big Sean Vexed by Big Questions Science has confirmed what the rapper has long sensed is true: Earth’s rotation is speeding up.
fashion Aug. 5, 2022
Want Design Porn? Go to Shelter Island, Ask for Louis Vuitton. A pop-up showcasing the brand’s finest classic bags, furniture, and décor is summering on the island.
always shopping Aug. 5, 2022
21 Leggings for Any Type of Workout Because leggings can make or break a workout.
By Bianca Nieves and Anne Cruz
extremely online Aug. 5, 2022
I Can’t Shut Up About This Pickle An artist flung a pickle from a McDonald’s cheeseburger onto an art-gallery ceiling and was selling it for $6,275.
family Aug. 5, 2022
My Mom Has No Friends The loneliness of growing older made bearable with playdates.
health Aug. 5, 2022
What We Know About Monkeypox So Far The Biden administration has declared the outbreak a public-health emergency.
beauty Aug. 5, 2022
The Future Smells Like Chanel No. 5 The French house has spent decades planning for it.
power Aug. 5, 2022
All of the Allegations Against Kevin Spacey A judge ruled that Spacey, who allegedly sexually harassed House of Cards crew members, must pay almost $31 million to the show’s production company.
lies Aug. 5, 2022
Alex Jones Owes Over $4 Million for His Sandy Hook Lies And possibly more: A jury will now consider punitive damages for two parents whose son died in the massacre.
summer guide 2022 Aug. 5, 2022
Vacation Is Just a Mindset In defense of low-stakes travel.
feature Aug. 5, 2022
Would You Work in an Amazon Warehouse Just to Get Pregnant? Women are pulling graveyard shifts in backbreaking jobs to pay for IVF.
By Angelina Chapin
choo choo Aug. 5, 2022
Rating the Himbos of ‘Bullet Train’ “What if all your boyfriends were trying to kill one another on one train?” is a perfect summer-movie concept.
¡hola papi! Aug. 5, 2022
‘I’m Afraid to Fully Embrace My Identity As Nonbinary’ Unlike caterpillars who are destined to be butterflies, humans don’t intrinsically know who we’re supposed to become.
By J.P. Brammer
More Stories