“I’ve discovered my deepest source of inspiration, which is art,” Sylvia Plath wrote to her mother, in 1958, “the art of the primitives like Henri Rousseau, Gauguin, Paul Klee, and De Chirico.” She had abandoned her dreams of becoming an artist six years earlier, at age 20, while studying studio art at Smith College, and decided to focus on her writing career. Painting and drawing remained as a hobby and influenced her poetry throughout her life.

The new exhibition “One Life: Sylvia Plath,” opening today at the National Portrait Gallery in Washington, D.C., examines how visual art shaped Plath’s identity throughout her 20s, in the 1950s and early ‘60s. Co-curated by Dorothy Moss and Karen Kukil, the show features the writer’s drawings, self-portraits, letters, and family photographs. Memorabilia include her green Royal typewriter (where she liked to type on pink writing paper), a ponytail of hair saved by her mother as a keepsake, and a Girl Scout uniform.

Some viewers will recognize the exhibition’s more iconic photographs — of Plath posing Marilyn Monroe-style on the beach, or standing with her husband Ted Hughes. Her drawings are the most striking works on display: Some include lighthearted poems (‘Twas the Night Before Monday is about her family cooking dinner on Sunday nights) while others are abstract self-portraits made with sharp twists of color. Other pieces address politics and social expectations of women at the time – in one collage, she layered images of a bomber plane, a woman in a bathing suit, and magazine headlines over photos of Dwight D. Eisenhower and Richard Nixon.

“I have a visual imagination,” she once said. “My inspiration is painting and not music when I go to some other art form. I see these things very clearly.” 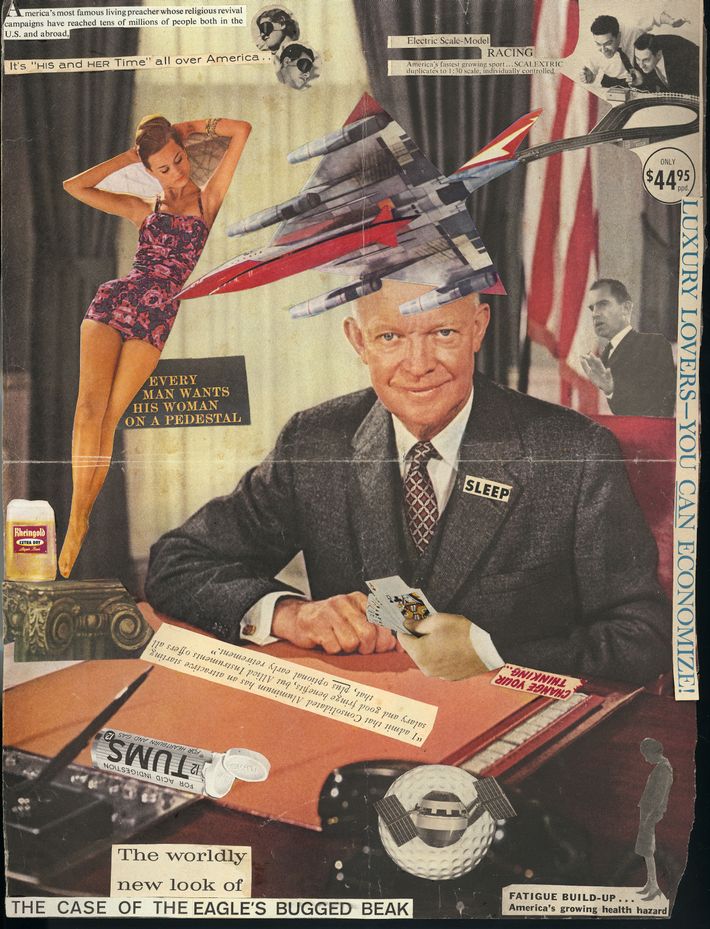 Collage by Sylvia Plath with images of Eisenhower, Nixon, bombers; 1960 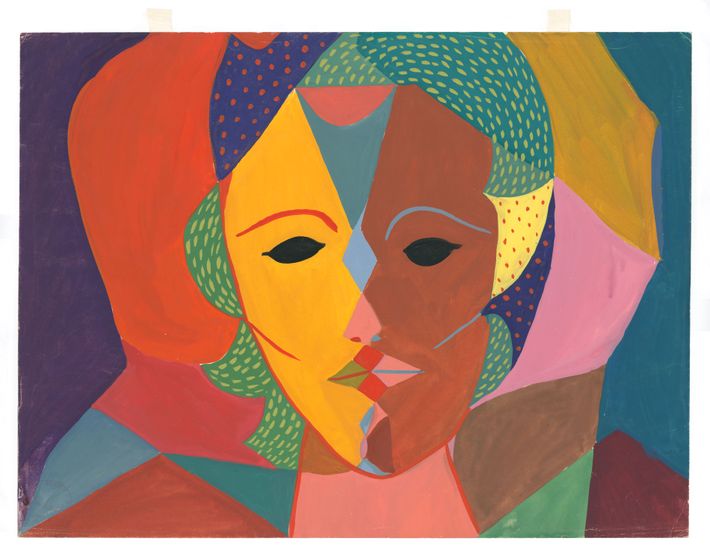 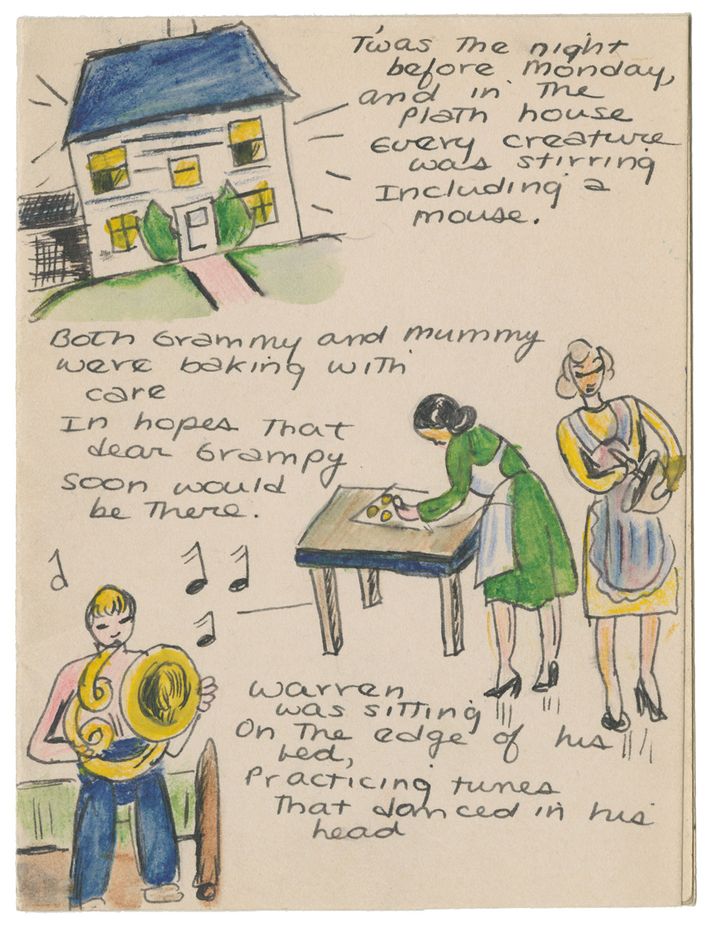 “Twas the Night Before Monday” by Sylvia Plath, No date

Ink and gouache on paper. 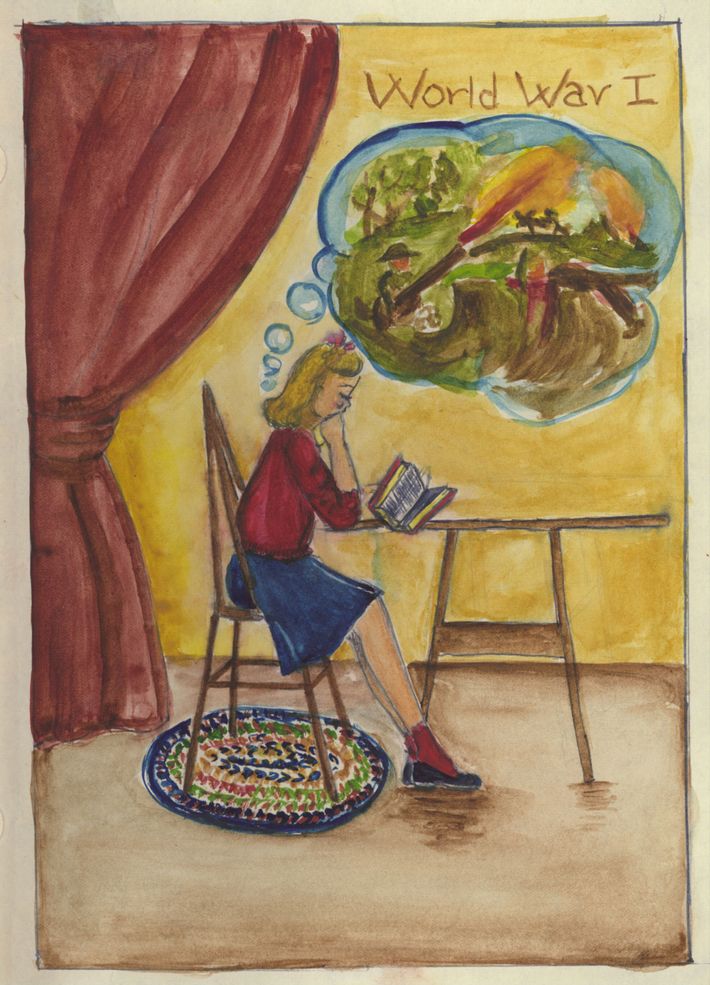 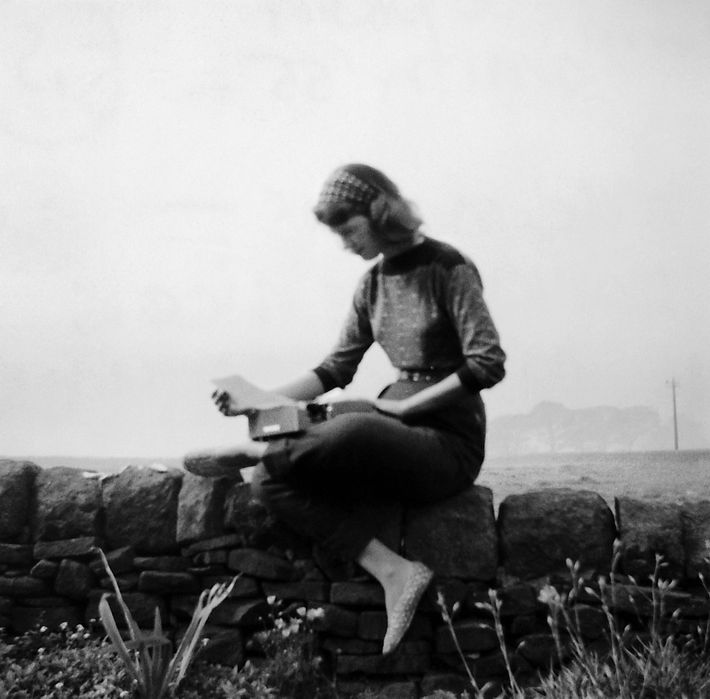 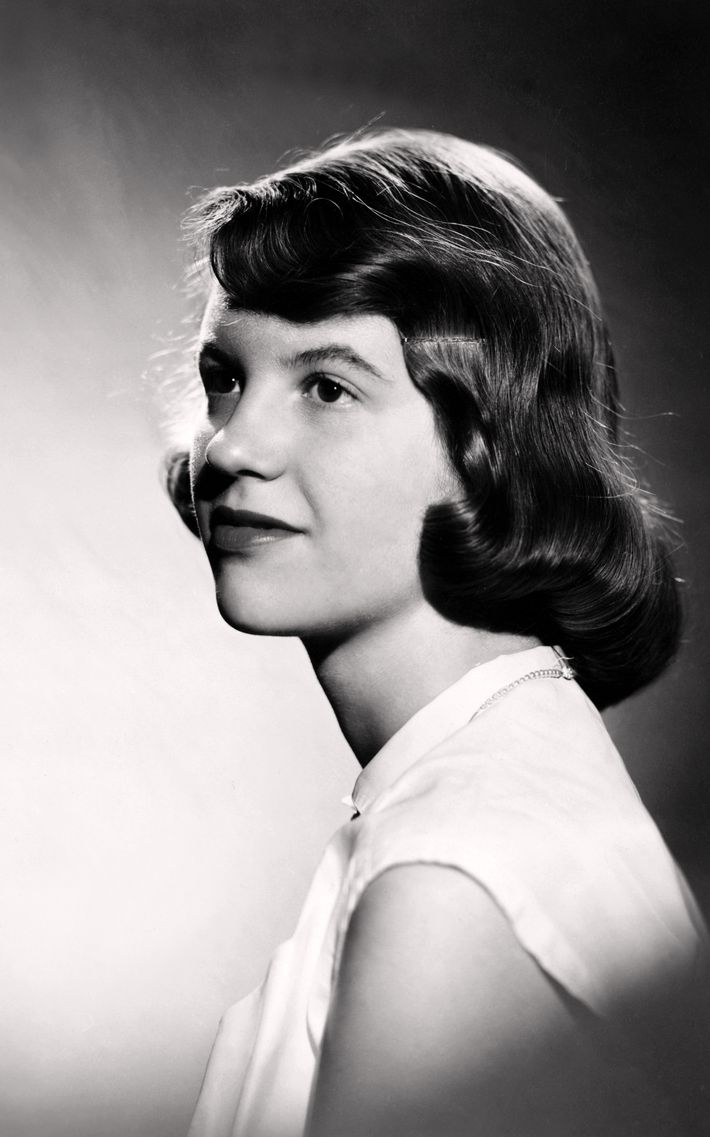 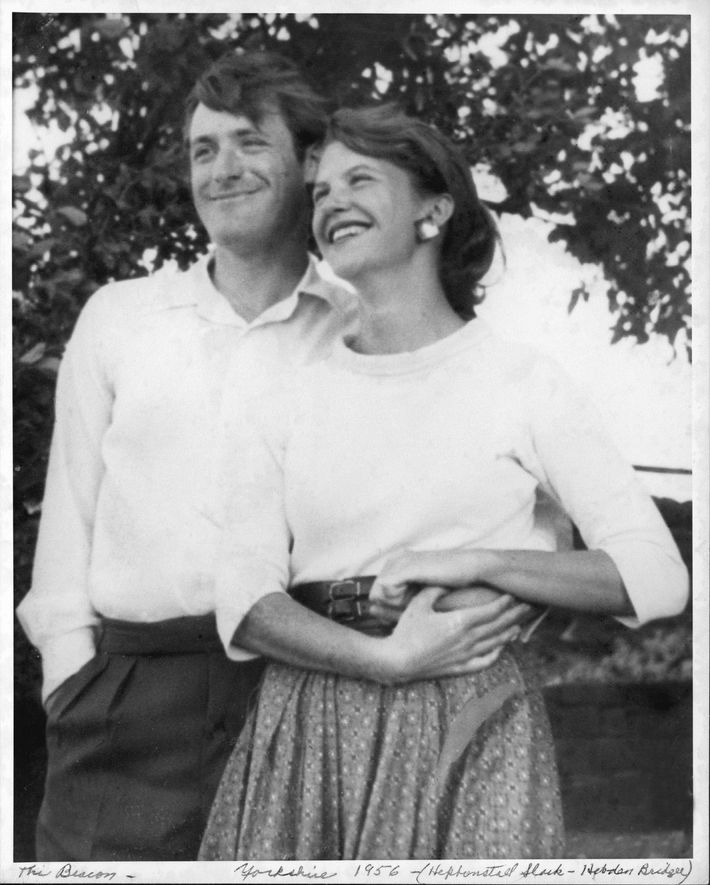 A New Exhibit Remembers Sylvia Plath in Her 20s

power 2 mins ago
This Congressional Candidate Gave Birth On-camera “It’s important for folks to see how pregnancy and birth is a medical event that occurs in a hospital with doctors,” says Louisiana’s Katie Darling.
style 10:00 a.m.
Gigi Hadid Called Out Ye for ‘Bullying’ After His YZY Show Ye went after Vogue contributing editor Gabriella Karefa-Johnson on Instagram after she disapproved of his “White Lives Matter” shirt.
pfw spring 2023 Yesterday at 5:30 p.m.
A Comedy of Errors at Paris Fashion Week This has been an utterly ridiculous Paris season, in the best and worst sense. And it’s not over yet.
By Cathy Horyn
fashion Yesterday at 5:29 p.m.
How Bella Hadid’s Spray-on Dress Was Made We were just as confused. So we found out.
celebrity Yesterday at 5:04 p.m.
Angelina Jolie Claims Brad Pitt Choked One of Their Children In her countersuit against Pitt, Jolie also alleged he poured beer on her and their children during the 2016 plane incident.
power Yesterday at 4:24 p.m.
‘Pro-Life’ Candidate Denies Report That He Paid for an Abortion Herschel Walker’s own son denounced him after an alleged ex-girlfriend told the Daily Beast that Walker had paid for her abortion.
always shopping Yesterday at 3:30 p.m.
12 Best Pairs of Leggings for Running in the Winter We spoke with runners to round up the warmest leggings so you don’t have to.
blackpink Yesterday at 3:01 p.m.
What’s Going on With BLACKPINK’s Leaked-Photo Drama? Everything to know about Jennie and V’s photo leak.
always shopping Yesterday at 2:30 p.m.
The Cut Shop’s Favorite Black Boots The kind you can wear every day.
divorce rumors Yesterday at 2:22 p.m.
Gisele Bündchen and Tom Brady May Be Over for Good A new report claims Bündchen and Brady have hired divorce attorneys.
breakout Yesterday at 2:00 p.m.
Paulina Alexis Doesn’t Care If You Think She’s ‘Too Rez’ The Reservation Dogs actress won’t let anything — or anyone — get in her way.
By Simon Moya-Smith
ask a boss Yesterday at 12:00 p.m.
‘How Do I Say No to Administrative Tasks That Aren’t My Responsibility?’ Once you start doing them it can be hard to stop, because you become the person with the track record of doing them well.
q&a Yesterday at 11:57 a.m.
Lio Tipton Is Still Processing The A Friend of the Family actor breaks down their approach to the true-crime genre.
rip Yesterday at 11:08 a.m.
Loretta Lynn, Country Legend, Dead at 90 Her raw and feminist country songs influenced generations of performers.
culture Yesterday at 10:15 a.m.
Where Did Don’t Worry Darling Go Wrong? Hollywood feminism strikes again.
first person Yesterday at 9:00 a.m.
Easy Target I was harassed and assaulted in broad daylight. Would bystanders have intervened if I was white?
By Vanessa A. Bee
"try everything" — shakira Yesterday at 8:50 a.m.
Bye, Guy In their first video as an official trio, the Try Guys say they were just as shocked by Ned Fulmer’s behavior as you were.
cut covers Yesterday at 8:00 a.m.
The Pain and Glory of Cori Bush In less than two years, the congresswoman built a base of power in D.C. by wearing her hardships on her sleeve.
By Rita Omokha
wtf Oct. 3, 2022
Everything We Know About Kanye West’s Harmful YZY 9 Show At his YZY 9 show, West printed on shirts a slogan used by white-supremacist groups.
review Oct. 3, 2022
Balenciaga Says, ‘Here’s Mud in Your Eye’ Demna toasts the wild and real.
By Cathy Horyn
More Stories