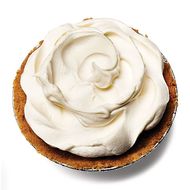 This search term, which refers to women interlocking legs and rubbing genitals against each other, first showed up as a growth genre in 2014; this year, it leapt all the way to the No. 7 search term overall. Also notable: “Cuckolding,” in which presumably married women have sex with men other than their husbands, reached a new height the year of Donald Trump’s election, after having steadily grown in popularity for years (up 495 percent from 2009). This was also the year of the Kim Kardashian robbery, which may be one reason that “burglar” was the second-fastest-growing search term in 2016, and “robbers” No. 5 (neither had been significant terms before).

What We Want When Nobody’s Watching 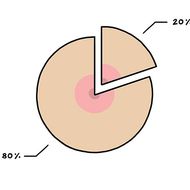 Millennials are into “cosplay.”

Compared to other generations, millennials were 214% more likely to search for cosplay, such as people dressed up as characters from video games. 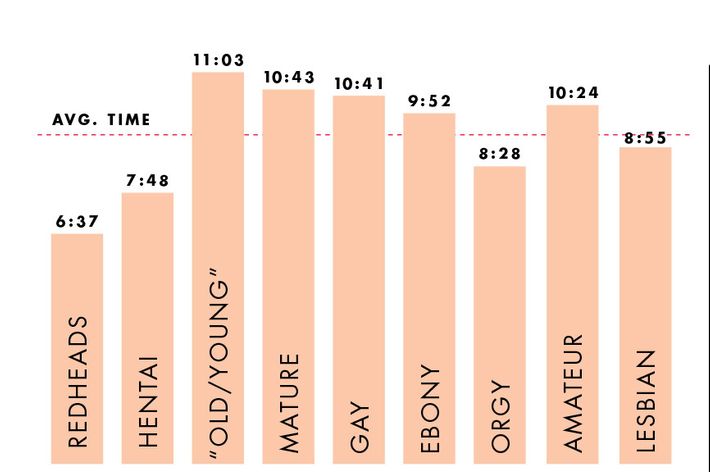 Women spend, on average, 1:14 minutes longer than men per visit on the site.

Searches for “elf” go up 464% at Christmastime.

Traffic declines by 45% on Christmas Eve, spikes to 34% above average early on Christmas Morning, then falls 38% below average in the afternoon.

In 2015, the most popular dad-related search term was “stepdad and daughter.”

In 2015, “stepmom and son” grew 262% and climbed 71 spots in Pornhub’s popularity ranking. The top search term in the U.S. was “stepmom.” (The French got in on the trend, too, with “belle mere” the third- and “maman francaise” the fourth-fastest growing terms.) 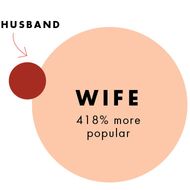 Searches for wife are 418% more popular.

The most popular search involving the term “husband” is “husband watches wife fuck.” 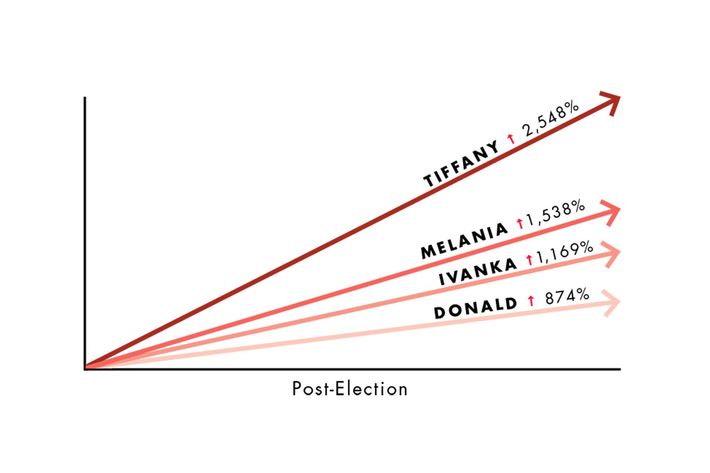 Over the following days, searches for most of the Trump family returned to normal, but Tiffany remained extremely popular, growing to 9,128% above the daily average by November 15.

On Election Night in the U.S., overall traffic grew 10% after Donald Trump officially won the presidency just past 2 a.m. In red states, the spike was higher (20% rather than 12%) and came earlier (peaking at 3 a.m. rather than 4 a.m.).

When Hillary Clinton mentioned Miss Universe Alicia Machado during a presidential debate, searches for her name went up 3,029%.

In early January, when rumors of a “pee tape” involving Donald Trump first surfaced, searches for “golden showers” spiked by 289%.

Men are 24% more likely than women to search for “golden showers,” with the term more popular as men get older (75% more popular than average among men 65 or older). Internationally, the search is most popular in the Czech Republic, with Russia coming in fifth. 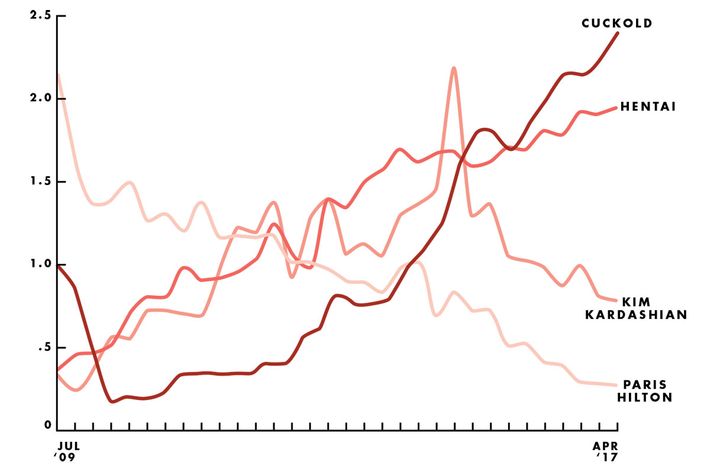 And about Fidel Castro.

Compared to the rest of the world, the three searches unique to American viewers are “big booty Latina,” “big black dick,” and “ebony.”