Every week brings such an overwhelming onslaught of news, that sometimes the most entertaining bits can fall through the cracks. Here, we’ll recap the pettiest squabbles, juiciest feuds, and other niche drama you didn’t know you were living for.

Great news for everybody who enjoys a good corporate feminist media takedown: the Bitch versus Bustle saga has officially transitioned to phase two, and this phase involves letters from lawyers.

If you haven’t been following, Bustle — the content farm for millennial women — recently launched the Bustle B-Hive, which is marketed as “a place for you to tell us about who you are and what you think so we can inform the entire universe about what’s important to Bustlers and all the millennial ladies that are driving public opinion and trends.” This, of course, is just a thinly veiled way of collecting user data to sell to advertisers in the name of empowerment. So last Friday, Bitch — a nonprofit feminist media organization that publishes Bitch Magazine — called Bustle out for their sketchy practices, and for ganking the name B-Hive, which Bitch named the monthly membership program they launched in 2009. The Bitch post was of the scorched-earth, take-no-prisoners variety. A choice excerpt:

What Bustle is doing isn’t about working toward equality, or liberating women from circumscribed gender roles, or even about making media and pop culture better reflect people’s real lives and identities. It’s about using women to sell shit to other women in order to further benefit wealthy people who literally do not care what they’re selling as long as it makes them more money. At a time when media outlets are being held accountable for tokenizing marginalized people for buzzy content while failing to include them in their leadership — or failing to even pay those writers at all — Bustle ought to know that its listicle-driven, SEO-superfriendly content isn’t fooling anyone anymore.

According to a new post Bitch published on Thursday, Bustle responded to their screed by offering to change the name of the B-Hive, but only if Bitch took down the post calling them out. And according to Bitch, “The message containing this generous offer came from a corporate law office, with two lawyers copied on the email.”

Bitch is refusing to remove the post, so we have to assume there’s a part III of this scandal on the horizon.

Last week, when newly awakened Katy Perry ranked her sexual partners by their prowess, she placed her DJ ex Diplo dead last. But the diarrhea-awareness advocate wasn’t about to take her comments lying down. “I don’t even remember having sex,” he replied to a post about the news, adding shortly afterward, “I won the bronze metal in sex Olympics.”

Nobody tell him it’s “medal.”

When you buy a ticket for a flight on a super-budget airline, you can expect two things: one, that there’s a fair chance the plane may fall apart in midair, and two, that passengers nearby will engage in acts you wouldn’t imagine witnessing on a Delta flight.

This story about a wild airplane trip actually has three stages of good-ass drama.

Stage one: First, photos went viral of a woman having sex with a “stranger” she met on a Ryanair flight from Manchester to Ibiza. The woman reportedly grinded (ground?) on top of the man while he called out to fellow passengers to see if anyone had a condom. Who are these two people? That’s what we’ll find out in …

Stage two: The guy turned out to be an engaged dude who was flying to Ibiza for his bachelor party. And guess what? His pregnant fiancée was waiting for him back home. Oops! Then …

Stage three: The girl in the video claimed it was just a lap dance and no sex occurred. As a friend of the woman put it, “Nothing really happened. She did a fully clothed lap dance for a laugh, no sexy time occurred.”

Nothing to see here, folks.

Houston, We Have a Problem

On Sunday, a woman named Katie Hinde tweeted out a photo of the children’s clothing section at Target, writing “Did I just take a bunch of NASA tank tops from the boys section & put them in the girls section? Yes. Yes I did.”

Did I just take a bunch of NASA tank tops from the boys section & put them in the girls section? Yes. Yes I did. pic.twitter.com/hXHBbaog2W

It went viral, though it wasn’t long before people began to call it out as a performative, self-congratulatory gesture that would — as anyone who’s ever held a job in retail can attest to — simply serve to make a worker’s job more difficult.

when you make a retail worker's life harder >>> https://t.co/Vrrvnr7MCQ

really showed the employee who will have to move them to back to the correct section who's boss!! https://t.co/6VwJN3025T

Hinde defended it as “confronting sexism.”

Meanwhile, the replies devolved into someone calling patronuses from Harry Potter an example of “cultural appropriation” because they’re from “Ancient Roman culture.”

You might be woke, but you'll never be actually-patronus-is-also-cultural-appropriation woke. pic.twitter.com/OgiOnoP8S0

Yeah, we don’t know what the hell is going on either.

Anyway, the whole thing initially kicked off because Hinde went to Target to buy a Wonder Woman T-shirt, so it sounds like what we have here is a pop feminism Bingo!

There’s no worse feeling — or better spark for a firestorm of drama — than when you’re caught talking shit about someone. On an international scale, audio of Australian prime minister Malcolm Turnbull making fun of Donald Trump leaked on Thursday. Their relationship didn’t get off to a good start in the first place, with Trump telling Turnbull back in February that their initial conversation was “the worst call by far” with a fellow world leader. They seemed to get along just fine during a May dinner on the Intrepid, but Turnbull mocked it during what was supposed to be an off-the-record event on Wednesday night.

He also did his best imitation of the president:

Trump has yet to respond, but the angry tweets should drop really any day now.

Cupcakes & Cashmere — the lifestyle blog that perfectly exemplifies the formula of naming your lifestyle blog two unrelated things connected by an ampersand more than perhaps any other — is being publicly called out by an ex-employee. Alina Gonzalez posted the details of her firing, essentially crediting it to a co-worker who was a “snitch” and an “absolute fake, two face” and a boss who wanted to “punish” and “disrespect” her because she worked from home while said boss was on vacation.

Jezebel unpacked the whole situation, which includes Gonzalez’s line that “there was an understanding that it was a retarded expectation … sorry for the hard R — I’ve never claimed to be politically correct, I’m sorry, I love all people.” By far the best detail is that Gonzalez presented this all in the form of an Instagram story with over 60 parts. 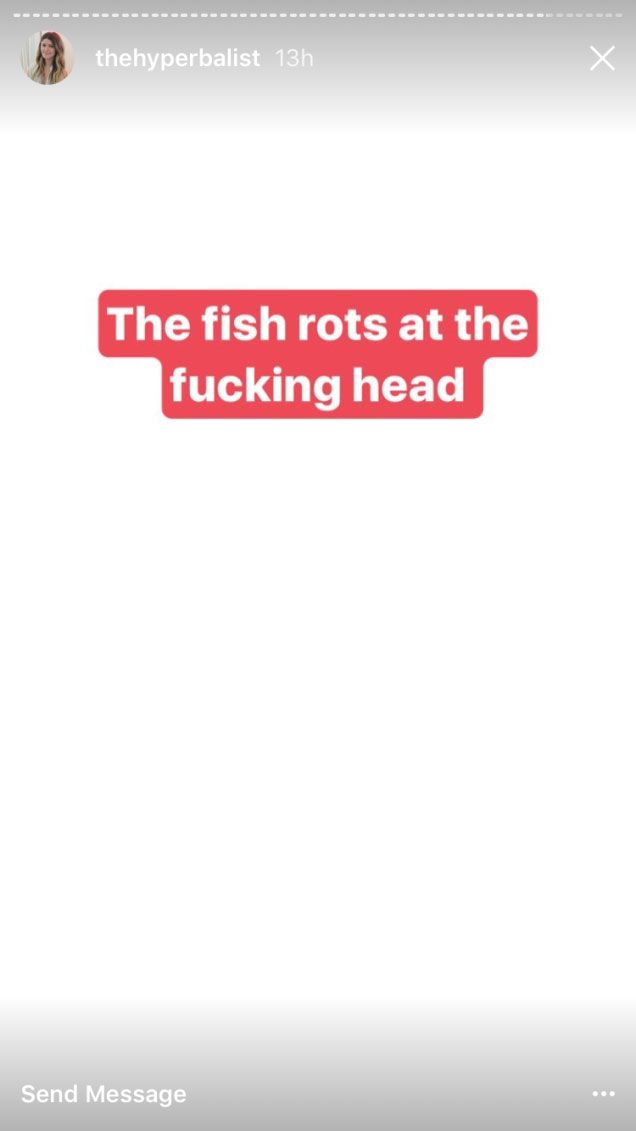 Seeing all those tiny white tabs at the top of the screen is enough to give anyone chills.

Catch up on previous drama here.

are u coming? 2:45 p.m.
Rockin’ Out With the Mayor and ‘Late-Night Dorinda’ at the New Hard Rock Hotel Don’t expect Sid and Nancy; it’s pretty swanky.
law & order 2:07 p.m.
Would You Go to Anna Delvey for Legal Help? The infamous scammer is allegedly starting a law firm.
celebrity 2:02 p.m.
Rihanna Reportedly Had Her Baby According to TMZ, she gave birth to a baby boy.

obsessive tester 12:30 p.m.
19 Best Leave-in Conditioners for Hair That Just Can’t Anymore Softer, smoother, and shinier hair is just a spritz (or squirt) away.
By Erica Smith and Bianca Nieves
graduation (taylor's version) 12:24 p.m.
Who Said It: Taylor Swift or a Fortune Cookie? “Learn to live alongside cringe” and other wise advice from her NYU commencement speech.
style 11:36 a.m.
Hey Fashion Friend: Help! I’m About to Be So Sweaty There’s nothing wrong with sweating, but here are some tips for making it less uncomfortable.
celebrity 11:13 a.m.
Harry Styles Says Olivia Wilde Was ‘Very Helpful’ on Set He told Howard Stern he had “a wonderful experience” being directed by her in Don’t Worry Darling.
life after roe 11:00 a.m.
I, Too, Have a Human Form In Justice Alito’s draft opinion, the pregnant body is erased.
my two cents 10:00 a.m.
I Love My Teaching Job, But It Doesn’t Pay Me Enough Your options aren’t easy. But neither is squeaking by without enough money to do the things you want.
By Charlotte Cowles
motherhood 8:00 a.m.
A Model With a C-section Scar Is in the 2022 Sports Illustrated ‘Swimsuit’ Issue For the first time in the magazine’s 58-year history.
lawsuits Yesterday at 5:18 p.m.
Amber Heard Says She Thought Johnny Depp Would Kill Her A makeup artist explained how she covered Heard’s bruises.
shopping Yesterday at 5:05 p.m.
14 Brands Getting Plus-Size Swimwear Right Here’s where to shop.
closings Yesterday at 4:51 p.m.
Bye-Bye, Bite Beauty After a decade in business, the brand is shutting down.
"size inclusivity" Yesterday at 3:40 p.m.
Victoria Beckham Says Wanting to Be Thin Is ‘Old-Fashioned’ Then why does her line only carry dresses up to size 14?
the most fertile man Yesterday at 3:38 p.m.
Nick Cannon Says He’s Considering a Vasectomy “I ain’t looking to populate the Earth completely.”
power Yesterday at 1:35 p.m.
Fans Are Spending Thousands to See the Depp v. Heard Trial Some traveled cross-country, camping outside the Virginia courthouse for the chance to be among the trial spectators.
shopping Yesterday at 1:16 p.m.
17 Fisherman Sandals That Are Actually Cute No bait required.
sober questioning Yesterday at 12:00 p.m.
‘I Got Sober by Mistake — Can I Go Back to Drinking?’ That’s up to you. But give yourself credit: It wasn’t an accident, it was your choice.
By Ana Marie Cox
culture Yesterday at 10:08 a.m.
18 Books Our Favorite AAPI Writers Love Recommendations in celebration of AAPI Month from some of the Cut’s favorite writers.
health Yesterday at 10:00 a.m.
The Baby-Formula Shortage Keeps Getting Worse Anxious parents are navigating supply-chain issues, recalls, and rations.
More Stories