Before writing “The Night Porno Films Turned Me Off,” Haskell had tried to look at this new breed of explicit movies as movies — that is, as a new avenue for interesting art. “My own long-cherished illusion was that some gifted filmmaker working in this marginal area would take advantage of his freedom and come through with the kind of imaginative handling of adult sensuality that had escaped the powers of the major American directors,” she wrote. She and a couple of other critics had even gone to a conference, in New Orleans, of the Adult Film Association of America, an industry trade group, “in the hope of discovering some common ground for discussion.” Nor was Haskell new to this subject. She had published From Reverence to Rape: The Treatment of Women in the Movies, a defining book about feminism and film, in 1974. (She was a critic at The Village Voice when she wrote this essay, then came to New York the next year, and subsequently went to Vogue and thence to full-time book authorship, most recently with Steven Spielberg: A Life in Films.) 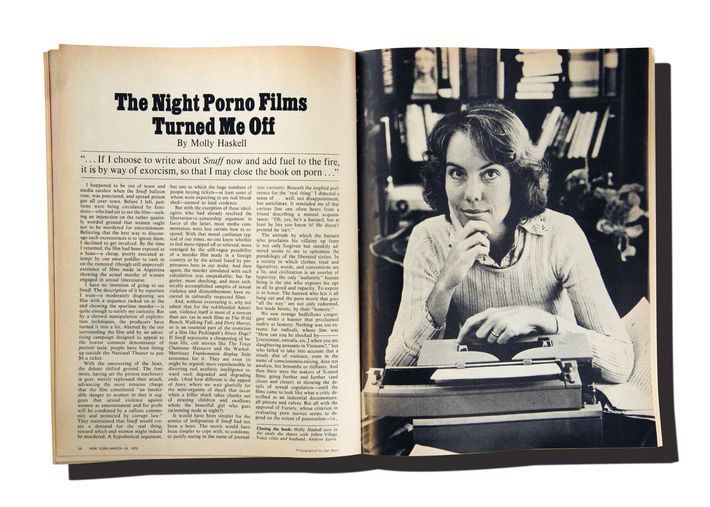 Haskell is still thinking about this subject today, though she admits that film is not the place where a lot of it is playing out. “Maybe some of my thoughts are antiquated on whether it’s violence against women,” she says. “I think some of that role would have been taken over by video games. But it’s become taboo to complain about violence. Even women critics who are sometimes horrified or put off or just bored by the violence of superhero movies can’t come out and say it, or all the fanboys will jump on them. It’s not cool to complain.” Back then, if you didn’t like seeing porn all over your neighborhood, people would roll their eyes about your Victorian hang-ups; now, if you don’t like big superhero movies, they call you a cultural snob and an elitist. Hard to say which is a bigger insult.

Haskell experienced blowback too, but of a different kind: “I would go out to colleges and women would be practically booing me because I wasn’t in this militant anti-pornography group — the Andrea Dworkin group, Women Against Pornography. They were just getting going — I think they were founded that year.” The argument was, she suggests, a little like the current discussion of sex work. “There’s no definitive feminist line. Feminists may set forth an agenda, but that’s not the determining one. Or the definite one. That’s why I don’t call myself a feminist film critic — I’m a film critic first and then a feminist.”

celebrity 5:45 p.m.
Jodie Sweetin Won’t Let Police Brutality Stop Her From Protesting The actor spoke out about the viral video of police pushing her to the ground during an abortion-rights protest.
celebrity 5:11 p.m.
Machine Gun Kelly Reveals He Attempted Suicide in New Documentary He was on the phone with Megan Fox at the time.
power 3:50 p.m.
Everything to Know About the WNBA Star in Russian Custody After her months in detention, Brittney Griner’s trial will begin on July 1.
the bigger picture 3:15 p.m.
Thirty Years of Community — Not Cops or Corporations — at the Dyke March Scenes from this weekend’s anniversary march in New York City.
By Melissa Kravitz Hoeffner
jussie smollett 3:12 p.m.
What Was Jussie Smollett Doing at the BET Awards? The star, who was found guilty of staging a hate crime in 2019, appeared on Sunday’s red carpet.
celebrity 3:08 p.m.
Ireland Baldwin Opens Up About Her Abortion “I chose me, and I would choose me again.”
celebrity 1:34 p.m.
Ben Affleck Is Looking for Reasons to Be Stressed Why else would he let his 10-year-old son get behind the wheel of a Lamborghini?
budgeting 1:00 p.m.
This Wedding Season Is Going to Cost You Budgeting for someone else’s big day.
By Emma Turetsky
why? 12:20 p.m.
Alec Baldwin Has Taken It Upon Himself to Interview Woody Allen This seems like a bad idea, but carry on.
brooding 12:00 p.m.
What Even Is a Resilient Child? An unexpected Instagram exchange made me consider how growing up with social media affects kids.
bet awards 11:27 a.m.
Jazmine Sullivan Wants Men to Talk About Abortion Too Presenters at the BET Awards were outspoken about the loss of Roe — but the men were noticeably silent.
gone sale-ing 10:00 a.m.
Tatcha Lovers, It’s That Time of Year Again All its products are on sale, but today’s the last day!
how i get it done 7:00 a.m.
How Pro Wrestler and WWE Superstar Bianca Belair Gets It Done And a message to the Rock: You need to put her in your next movie.
By Jane Starr Drinkard
astrology Yesterday at 8:30 p.m.
Madame Clairevoyant: Horoscopes for the Week of June 27 Early Tuesday morning, Neptune retrograde begins. For better or for worse, you’ll have to reckon with the world as it actually is.
By Claire Comstock-Gay
sex diaries Yesterday at 8:00 p.m.
The Editor Tidying Up Just in Case His Lover Calls This week’s sex diary.
wtf Yesterday at 6:08 p.m.
A Truck Driver Ran Into Pro-Choice Protesters in Iowa Other protesters across the country reported instances of violence, including excessive force by police.
abortion Yesterday at 3:27 p.m.
Celebrities, Activists, and Politicians React to the End of Roe The Supreme Court’s Dobbs decision has, as expected, overturned our constitutional right to abortion.
abortion rights Yesterday at 3:19 p.m.
Olivia Rodrigo, Megan Thee Stallion, and Phoebe Bridgers Send SCOTUS a Message The singers expressed anger at the Dobbs decision during their Glastonbury sets.
pride Yesterday at 8:00 a.m.
Why I Won’t Be Wearing Pride Merch Today Each year brands roll out Pride collections, which are often maximalist and just about always an eyesore.
life after roe June 25, 2022
Rage, Fear, and Hope Outside the Supreme Court “We understand that poor women and women that are Black and brown are going to pay the most for this repeal. That’s why we’re here.”
More Stories