Dutch street photographer Ed van der Elsken (1925–1990) searched for what he deemed “his people”: eccentrics whose style defied convention in postwar Paris, and later Amsterdam and Tokyo. His most iconic images are showcased in the Paris exhibition “Camera in Love,” which provides a glimpse of fringe kids from the 1950s to 1980s.

Born in Amsterdam in 1925, van der Elsken first studied sculpture, then photography; he began snapping away in the streets of Amsterdam, and assisting photographers to save up for his own Rolleicord camera. In 1950, he moved to Paris, where he met Vali Myers — a magnetic free-spirited party girl with brassy red bangs dangling over smudgy eye makeup — who introduced van der Elsken to her bohemian crew.

Van der Elsken photographed Myers and her friends, and produced a series called Love on the Left Bank (or Een liefdesgeschiedenis in Saint-Germain-des-Prés). Over his four-year stay in Paris, he captured their coy looks, makeout sessions, uninhibited dancing, and — bien sûr — constant smoking.

The photographer wrote accompanying text for the images, describing St-Germain-des-Prés as “one square mile of scented riverside quay and boulevard, furnished, the whole way, with crowded cafés and empty bookshops.” He likened the Parisian lifestyle to “a celestial haze of Pernod and garlic.” The bohemian vibe hints at spontaneous snapshots, but van der Elsken in fact often made his subjects pose, a biographical yet exaggerated narrative for the camera.

A few years later, van der Elsken published the series in book form. In the interim, several of his photographs were selected by prominent curator Edward Steichen for acclaimed group shows at MoMA in New York, namely “Postwar European Photography” (1953) and “Family of Man” (1955).

Vali Myers recalled in a 1979 letter — displayed in the exhibition and written in curlicued script — “We lived in the streets and cafés of our quarter, like a pack of bastard dogs … there was always cheap booze and Algerian hashish to get by on.” She deemed the squad of uprooted kids “stateless post-war vagabonds” who were “old for their young years.” Myers also appeared in van der Elsken’s 1972 film Death in the Port Jackson Hotel. Covered in face paint, while affectionately if somewhat indiscreetly pawed by her younger lover, she shared recollections of drunk friends arrested for indecent exposure and drug addicts who committed suicide.

The Paris exhibition also features images from later in the photographer’s career. After Paris, van der Elsken traveled extensively — to Hong Kong, Sierra Leone, Manila, Oaxaca, and over a dozen trips to Japan — and later returned to the Netherlands. On his native terrain, he photographed rebellious teens in Amsterdam’s Nieuwmarkt neighborhood: a girl in cat-eye glasses with cotton-candy hair, a set of twins with bouffants side-eyeing him through their winged black liner, punk boys with Mohawks, and girls wearing spiked pumps and fingerless gloves. Click ahead to see images from the exhibit.

Ed van der Elsken, “Camera in Love” is on view at the Jeu de Paume museum in Paris through September 24th. 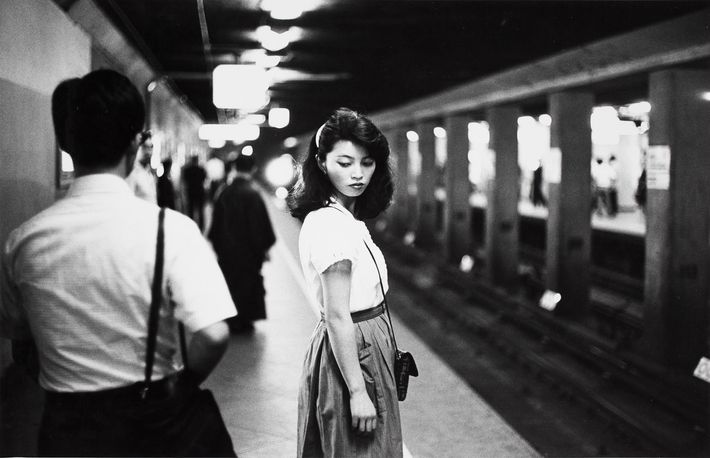 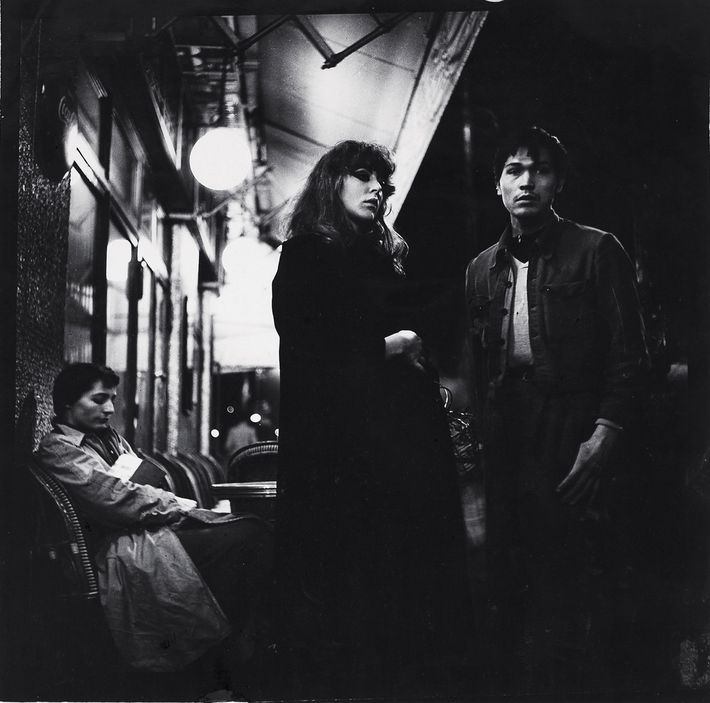 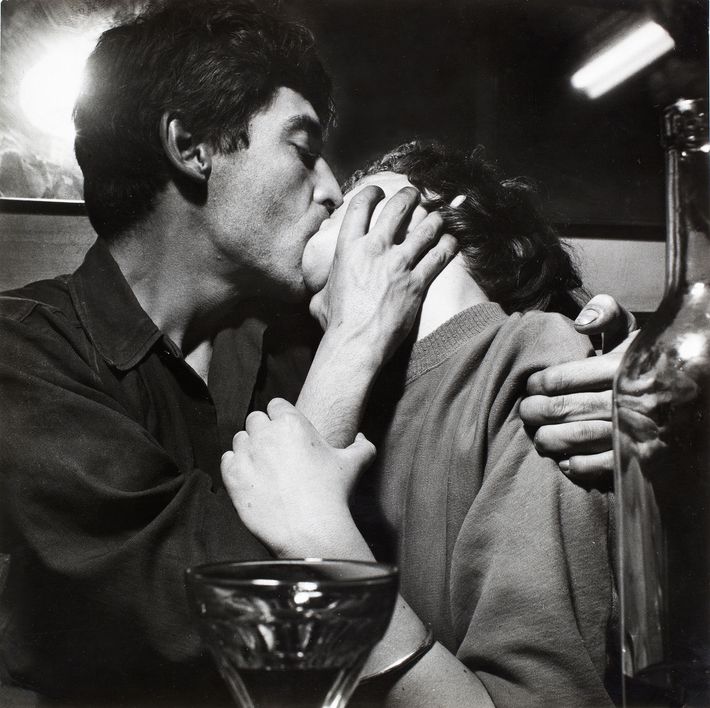 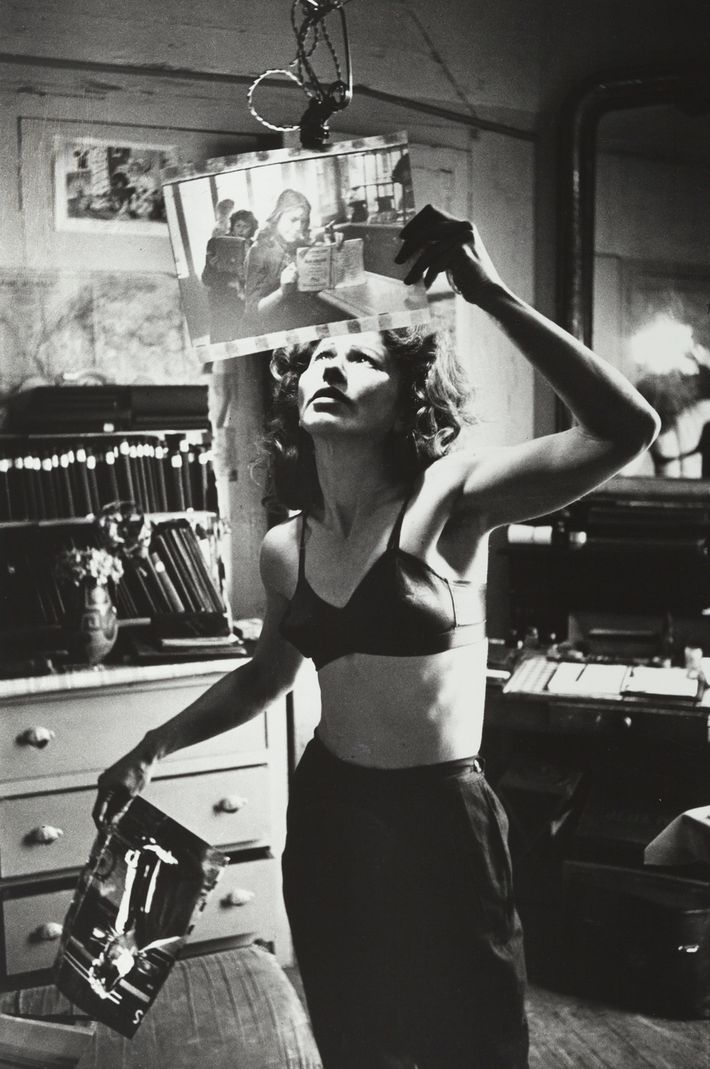 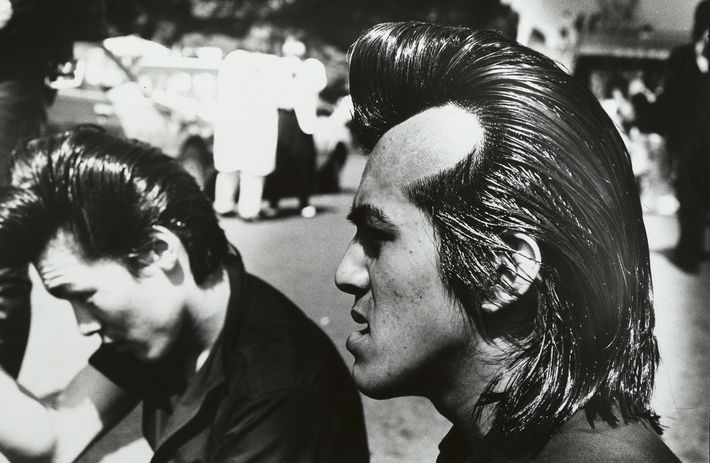 rust 12 mins ago
Everything We Know About the Rust Shooting An FBI report concludes that the trigger must have been pulled.
sure why not 4:49 p.m.
Are Brad Pitt and Emily Ratajkowski Really Hanging Out? Rumor has it EmRata has “the vibes that Brad likes.”
soho grifter 4:34 p.m.
Anna Delvey Is Getting Out of Jail Having “demonstrated interest in pursuing legitimate employment in the United States,” a judge ruled.
pfw spring 2023 4:26 p.m.
The T-shirt, Beloved by All, Gets a New Look By Miu Miu, nonetheless. Plus: Louis Vuitton shows a trove of great accessories.
By Cathy Horyn
what the what 4:16 p.m.
Carrie Is a Pigeon Lady Now Is that a real-life bird? No, it’s an $890 designer clutch.
celebrity 3:37 p.m.
What’s Going On With Harry and Meghan’s Netflix Docuseries? The Duke and Duchess of Sussex are reportedly at odds with the producers.
obsessive tester 3:00 p.m.
21 Self-tanners to Maintain Your Summer Glow Through Winter Natural and easy to apply.
power 2:51 p.m.
Iranian Forces Led Brutal Crackdowns Against University Protesters Despite forceful government intervention, women continue to take to the streets in defiance of government orders.
tv 2:32 p.m.
Excuse Me, Who Is This British Baking Show Hunk? Hellooo, Sandro!
what's the reference? 2:15 p.m.
An Early Aughts Staple Has Us in a Hold A personal shopper gives us tips on how to wear a camo miniskirt.
art and soul 1:50 p.m.
The Art of Motherhood In paintings, illustrations, and ceramics, artist Madeline Donahue captures the ecstasy and agony of being a mom.
By Amil Niazi
holiday gifts 1:31 p.m.
16 Gifts That Keep On Giving Whether they’re bandanas for abortion rights or cutting boards to feed the elderly.
power 1:01 p.m.
This Congressional Candidate Gave Birth On-camera “It’s important for folks to see how pregnancy and birth is a medical event that occurs in a hospital with doctors,” says Louisiana’s Katie Darling.
style 1:00 p.m.
Gigi Hadid Called Out Ye for ‘Bullying’ After His YZY Show Ye went after Vogue contributing editor Gabriella Karefa-Johnson on Instagram after she disapproved of his “White Lives Matter” shirt.
celebrity 12:51 p.m.
Angelina Jolie Claims Brad Pitt Choked One of Their Children Pitt’s rep called the allegations “completely untrue.”
pfw spring 2023 Yesterday at 5:30 p.m.
A Comedy of Errors at Paris Fashion Week This has been an utterly ridiculous Paris season, in the best and worst sense. And it’s not over yet.
By Cathy Horyn
fashion Yesterday at 5:29 p.m.
How Bella Hadid’s Spray-on Dress Was Made We were just as confused. So we found out.
power Yesterday at 4:24 p.m.
‘Pro-Life’ Candidate Denies Report That He Paid for an Abortion Herschel Walker’s own son denounced him after an alleged ex-girlfriend told the Daily Beast that Walker had paid for her abortion.
always shopping Yesterday at 3:30 p.m.
12 Best Pairs of Leggings for Running in the Winter We spoke with runners to round up the warmest leggings so you don’t have to.
blackpink Yesterday at 3:01 p.m.
What’s Going on With BLACKPINK’s Leaked-Photo Drama? Everything to know about Jennie and V’s photo leak.
More Stories