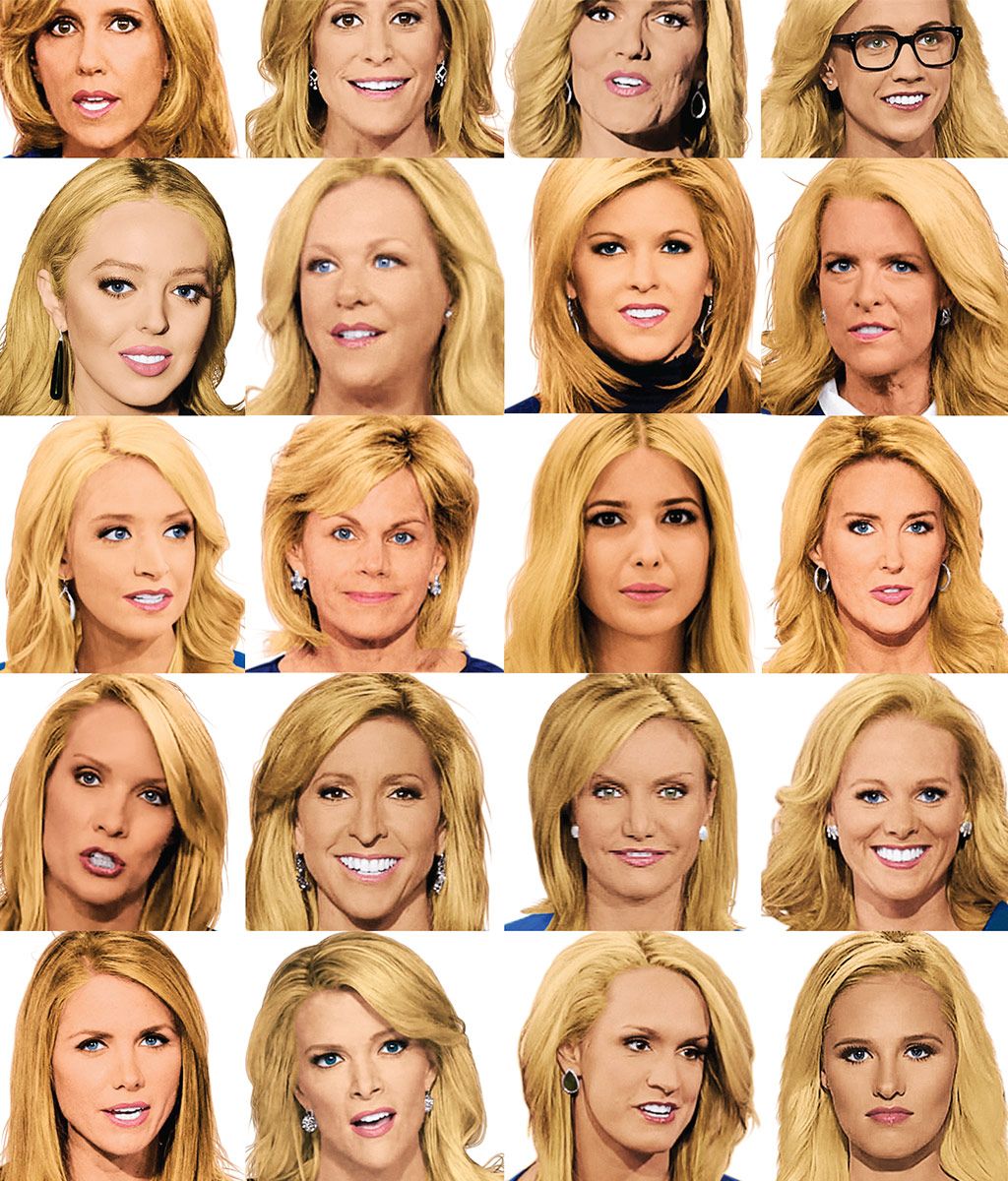 Blonde hair is at least 11,000 years old. The variety we’re now most familiar with began as a genetic mutation in northern Europe, where the sun is weak: Light hair allows more vitamin D to trickle in through the scalp, the theory goes, which is useful when the sky is cold and dark. It wasn’t the first hair color that people had, so it was rare, and its being rare made it sexually desirable, and its being sexually desirable meant it spread, and then there was a bit more of it.

Eventually, blondness spread south: Many of the Greek gods were golden-haired, as were many heroes of the Iliad. People missing the mutation started figuring out ways to ape it very early on with primitive versions of Sun-In. In ancient Rome, they used pigeon shit and also a combination of alum, wood ash, and quicklime. During the Renaissance, it was horse urine or lemons squirted onto the hair, which was then fitted into an open visor called a solana.

It didn’t take long for stereotypes besides sexiness to attach to the look. Marie Antoinette’s friend Rosalie Duthé was a legendary courtesan with a habit of taking long pauses before she spoke. She was frequently the mistress of someone famous and powerful — she was even gifted to 20-year-old Prince Louis Philippe I by his father so that he could learn a thing or two. When a 1775 one-act play called Les Curiosités de la Foire sent up Duthé’s behavior, Paris was amused, and historians tend to agree that that moment was the birth of a notion that persists 250 years later: the blonde as slutty and dumb.

Fox News and Donald Trump have given blonde hair a new chapter: Now, blonde is the color of the right, for whom whiteness has become a hallmark. Over the past decade or so, as inclusiveness became the hallmark of Obama-era liberals, the left found feminist icons in Rachel Maddow, Samantha Power, and Michelle Obama, who make no apologies for their failure to fit traditional ideals. But #MAGA, Fox News America is a place where all the classic signifiers of privilege and wealth work on overdrive: country-club-issue blue blazers with brass buttons and khaki pants, and above all else, for women, that yellow-blonde, carefully tended hair — a dog whistle of whiteness, an unspoken declaration of values, a wink-wink to the power of racial privilege and to the 1980s vibe that pervades a movement led by a man who still believes in the guilt of the Central Park Five. During that Republican Preppy Handbook era, when Dynasty and Dallas were on TV, the type of conspicuous ostentation that would lead a real-estate developer to sheath his entire apartment in gold leaf was actually in vogue. Look at the movies: Jake’s girlfriend in Sixteen Candles with the lush swoop of thick, blonde locks that ended up stuck in a door (losing the boyfriend to a redhead of all things meant, literally, losing that luscious hair). Johnny, the villain of the Karate Kid films, had a decisive swoosh of blond hair that obscured his headband. We knew, the moment we saw that hair, that small, ethnic Daniel was up against more than another teenager, he was up against privilege itself.

Since only about 2 percent of the world has naturally blonde hair, being blonde is a choice, and the means used to get there can be very easy to read. As can the choice of which sort of blonde, precisely, one wishes to be. For every Carolyn Bessette-Kennedy, with expensive “buttery chunks” from the Brad Johns salon, there is, somewhere out there, a Kendra Wilkinson or a Holly Madison, with margarine-yellow ringlets. The class implications are almost embarrassingly easy to spot.

The alt-blonde common on Fox News is a specific look: It’s layered and yellow and never too long. It’s controlled and polished and always in place. In earlier generations, news was delivered almost exclusively by white men, with neat auburn (when it wasn’t graying) hair. These men spoke in tempered tones; they strove for a bland, unquestionable authority. But at Ailes-era Fox News, the point was no longer to project a sense of well-being or calm, it was to instill panic and fear, and blonde hair was practically a prerequisite for delivering it. Panicked reports about dangerous immigrants and the president with Hussein for a middle name were presented by white women wearing snug dresses, with pert noses, bronze skin, blonde hair. The Fox blonde is, in the end, conspicuously unnatural. She is less blonde as sexy and more blonde as safe: This blonde is a matronly blonde, a suburban soccer mom who makes sure everyone buckles up in the backseat of the minivan. This blonde is a reminder, perhaps, of what many Americans feel is truly at stake in a newly global world.

And then there are all the White House’s shades of blonde — the president likes men who look like generals and women who look like they all pledged the same sorority house. Many of Trump’s prominent female surrogates have blonde hair: Kellyanne Conway and Ivanka Trump, of course, but also the Trump daughters-in-law and the new-to-the-scene talking heads like Kayleigh McEnany, who once told Don Lemon on CNN that Trump “doesn’t want a scenario where there’s New Black Panthers outside with guns, essentially, like, intimidating people from coming into the polls”; Tomi Lahren, who compared the Black Lives Matter movement to the Ku Klux Klan; and tea-partier Scottie Nell Hughes, whose big moment was telling CNN “I hope I’m not going to have to start brushing up on my Dora the Explorer” after Tim Kaine gave part of a speech in Spanish.

But, of course, the right doesn’t own blonde hair. There are California surfer girls and the women of the other 49 states who like to look like them. There’s also a fair amount of elective blondness going on among the less fair-skinned. Many black and Latina women wear their hair blonde, perhaps the most prominent being Beyoncé and Jennifer Lopez. And there’s also the ironic, colorless blonde, the Courtney Love blonde, a platinum-stripped-of-all-pigment blonde in hipster land. But these are subversions — many of them attempts to undermine the implied racial essentialism of blondness rather than co-opt it. And then there’s the fact that for many women, blonde is flattering. To be blonde in adulthood is rare; to be blonde as a child is not, and as women grow older, we always search for qualities that connect us to our youth. “A blonde head attracts attention,” says Jena Pincott, a science writer who wrote a book called Do Gentlemen Really Prefer Blondes? (This may be one reason that Marilyn Monroe refused to allow other blondes on her sets.) “Light colors catch the eye. Blonde hair also suggests youth because hair darkens after puberty.” For a lot of women, a few carefully placed Sarah Jessica Parker highlights are just the thing (it can also cover up some gray).

But resist them or not, associations can go a long way. Recently, a study found female politicians with blonde hair tend to do better. Which does call to mind one very notable female politician and her relationship to her hair: For as long as Hillary Clinton was a public figure, Hillary Clinton was a blonde. She worked her hair — dishwater brown and frizzy, according to pre-politics photos — into every version of mainstream acceptable: She wore it with headbands, she wore it in a bob. She tried it longer, shorter, with barrettes and without.

In the first photographs taken after the election — mostly, of Clinton’s run-ins with supporters on hiking trails and in supermarket aisles — it appeared that she had finally given up the gimmick and let a bit of her natural gray-and-brown find its way in. Her fans rejoiced.

*This article appears in the August 7, 2017, issue of New York Magazine.

The Politics of Blondness, From Aphrodite to Ivanka