When Joss Whedon’s ex-wife revealed the beloved director’s multiple infidelities — and his mealy-mouthed, patriarchy-blaming excuses — in a scathing editorial on the Wrap this weekend, it came as a shock to some of his fans. Whedon, a favorite online for his nerdy, fan-friendly scripts for Buffy the Vampire Slayer, Firefly, and several of the Marvel Cinematic Universe movies, had cultivated on Twitter and through interviews a reputation as a committed male feminist — as he told The Hollywood Reporter, not quite jokingly, “I’m super woke. Such a woke bae.”

But to a parallel cohort of internet observers, the revelation that Whedon would seek to blame his own bad behavior on the patriarchy wasn’t surprising at all. The revelations from his ex-wife’s letter seemed only to confirm that Whedon fit a classic internet stereotype: the Insistent Male Feminist, whose performative wokeness generally masks bad interpersonal behavior, if not outright misogyny.

Online, men loudly proclaiming their feminism — insisting that they respect women — isn’t an earnest sign of good politics, but a fraught activity that, like all kinds of internet traditions, has metastasized into a meta version of itself. Respecting women is no longer a no-brainer — it’s a full-time obligation that requires tons of effort.

Bro: it's women here in need of respect

bro: come to this party

me: i cant, im focusing on building a better future

bro: theres women who need to be respected

Respect Women is less a single meme than it is a meme style. There is no set format or iconography, only an ideology — that of respecting women — as the primary goal. To some extent, it’s a riff on the eternal target of the lonely, fedora-tipping, “m’lady”-greeting nerd archetype; looked at from another angle, it’s an outgrowth of the “Wholesome Meme” genre — memes with sickly sweet punch lines about supporting your friends — laced with an acid dose of satire. The memes don’t make fun of the concept of respect for women as much as they make fun of the performance some online put into respecting women.

Within this meme subclass are a few formats. There are those who use animated GIFs to demonstrate how intense their respect for women is. There are those who consume “respect women juice,” a sort of Gatorade for those who worship the feminine mystique. There are still others who depict their women respect as a weaponized tactic — respect as a metaphorical bullet fired at unsuspecting women, illustrating the outsize intensity of the reverence. Another popular format rewrites dialogue between fictional characters arguing emphatically about how women are thots or queens. 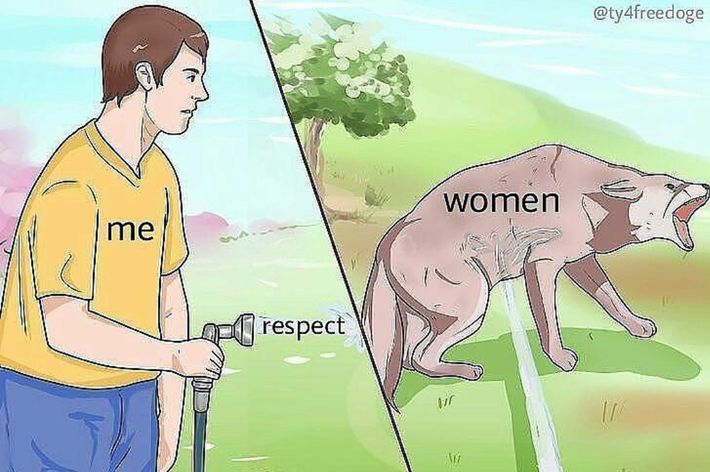 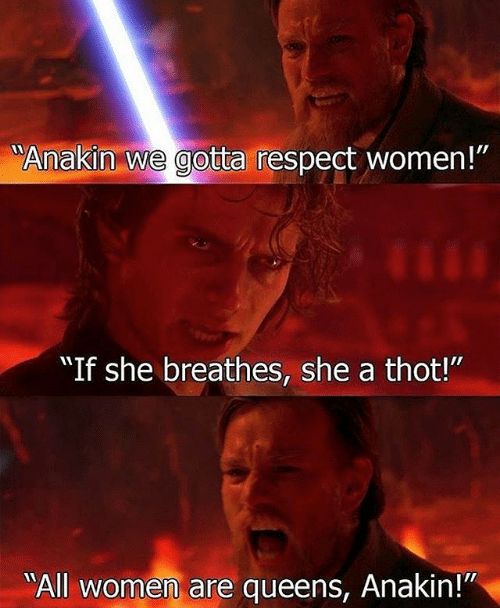 The underlying point, though, is always the same. In form and function, posts about respecting women and memes making fun of those posts have merged to become merely identical. It’s difficult to see how memes like these …

My schedule is packed for today 😩 pic.twitter.com/KaMkzhXUCa

"On a scale of 1 to 10, how much do you respect women?" pic.twitter.com/jVyt8OEPXV

It's 4:20 you know what that means pic.twitter.com/wVHl5BCrK6

When trump says he has respect for women #internationalwomensday pic.twitter.com/kNYqEpqFvv

Thinking about the girl that got away... little bit more than 140's worth. #MadamPresident pic.twitter.com/Zgm8TiFRlh

Respecting women, as an eye-rolling expression of wokeness and as a satire of the same, dates back to Twitter’s golden age. In 2011, a Twitter user under the handle @iRespectFemales, who tweeted earnest and grating platitudes about how women were to be treated like queens, became a minor Twitter celebrity — and, of course, an object of ridicule for the burgeoning crowd of message-board refugees who came to be known as Weird Twitter — thanks to tweets like, “You’re my rose :) and I’m your sun and water in which you need to breathe and stay beautiful <3” and “LADIES: don’t ever think you’re NOTHING because somewhere along the line, there’s going to be a guy who thinks you’re EVERYTHING.”

Online spaces, large and small, are generally hostile, sexist, and simmering with latent or obvious toxicity for people who aren’t straight white guys. Rebecca Solnit’s term, “mansplaining” — when a dude explains something unprompted and unnecessarily — is particularly popular on platforms like Twitter, where men often jump in to repeat women’s words back to them.

One reaction to the increased attention paid to gender dynamics of online spaces has been the rise of an aggressive strain of performative male feminism, in which guys attempt to one-up each other in terms of wokesmanship. It’s not necessarily disingenuous — but, of course, in its attempt to combat male domination of online spaces, just recapitulates the same problems. One can see it in Whedon’s feed, though the poster child for flexing wokeness is actor Matt McGorry, who spent much of 2015 being a feminist on Twitter and Instagram, and penning essays like “How Becoming a Feminist Felt Like Falling in Love.” His championship-level run was immortalized in a year-end BuzzFeed post headlined “Can We Talk About How Woke Matt McGorry Was in 2015?”

This aggressive wokeness, combined with the sub-Hallmark-cards women-are-queens platitudes of accounts like iRespectFemales, has slowly metastasized into Respect Women, the meme. Respect Women memes, if Google Trends is to be believed, had a peak moment about three months ago, when they began taking off on social media, and culminating in early June with a video about the very concept by none other than PewDiePie.

Trying to figure out where the earnestness ends and the referent irony begins is nearly impossible to suss out, especially when it’s so easy to be a Respecter of Women and a ridiculer of aggro women respecters at the same time.

Honoring #InternationalWomensDay, being an ally, this is your day, let me explain how

At some point, this whole thing folds in on itself amid an internet culture where being genuine is a vulnerability and disrespecting women is enabled by large online platforms. It’s not wrong, but if you spend too much time patting yourself on the back (or setting bait for others to do so), readers’ bullshit sensors go off.

On the Web, Respecting Women Is a Full-time Job

brooding 12:00 p.m.
What Will It Take for Momfluencers to Speak Up About Abortion Rights? Mommy bloggers have the power to mobilize real political energy — but they rarely do.
celebrity 10:28 a.m.
How Many Weddings Are Kourtney and Travis Going to Have? Kravis reportedly got legally married over the weekend.
celebrity 10:18 a.m.
Someone Sneaked a Phone Into Jesse Williams’s Broadway Debut Nudes from the show — leaked without the actor’s consent — are circulating on Twitter.